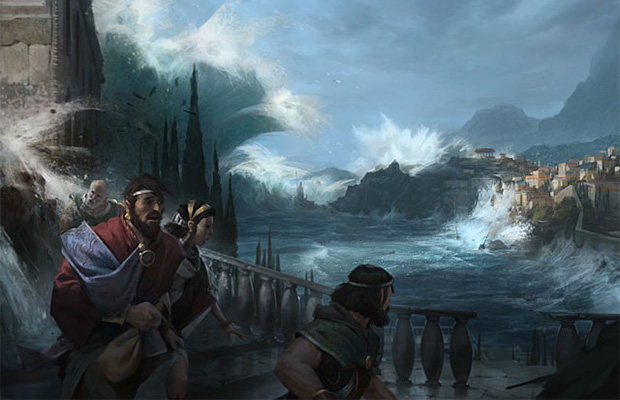 At the Great Barrier Reef off the coast of Australia, we’re seeing coral reefs that took decades to develop dying off en mass because of slight changes in the acidity and temperature of ocean water. As these reefs die off, the plethora of life that sprung up in and around them are disappearing as well and their absence ripples out affecting creatures that rely on them to survive, causing imbalances in the entire ecosystem…all from a small change in the acidity of ocean waters.

What do Magic and the Great Barrier Reef have in common? Well not a lot other than the occasional turtle and the fact that changes in the ecosystem are going to have long term impacts on their existence.

What the hell am I talking about? Over the last year and some change, Magic has gone through a huge number of seemingly minute and innocuous changes that going forward are going to have an impact on the value of cards, how these changes ripple out is only beginning to come to light. We’re still learning what all of these changes mean for the game over time, but let’s start by taking a look at what I’m talking about:

Rotation schedules have been changed. In the past we saw a large set released in October followed up by two expansions for that set being released in February / April, then a Core Set some time in July. The schedule of ancillary products slotted in around these releases, with Duel Decks featuring a late summer release that heralded the fall expansion and a late winter release that gave us a couple planeswalkers. Wizards was tying too much of it’s yearly success to the fall release and decided to try to make that April set matter as much as the October set, thus the new rotation was born.

Every six months we’re going to see two sets leaving Standard. Before a set like Khans of Tarkir would stay viable for 24 months after release, now it’s only going to be legal for 18 months. With the old rotation schedule we had a pretty easy time predicting when the peaks and valleys for card prices were going to be and we made easy money picking up cards like Elspeth, Sun’s Champion at $15 and getting rid of them at $30 when we knew the price would peak. We also knew that it was all down hill for cards rotating within the next 9-12 months.

I wrote an ill-received article about how this change could affect the annual price spikes we learned to count on and was basically laughed off the metaphorical stage with rotten vegetables and expletives peppering my psyche…but then here we are with very little movement in Khans of Tarkir & Fate Reforged (outside fetch lands) cards during rotation. I’m not ready to jump up and down proclaiming my victory on this idea quite yet as some cards did move, but overall this rotation is one of the calmest that I can remember.

Going forward we’ll have to see how Dragons of Tarkir and Magic Origins fare this April, my guess is that these sets will behave in a relatively similar manner. With only two sets appearing per block, we’re going to see many of the archetypes that rely on synergy unable to reach critical mass so it will become clearer which cards are powerful early in their lifespans.

For basically forever, judges at high level events have been compensated using the morally ambiguous Judge Foil program. It was fairly simple, you showed up to “volunteer” at a Grand Prix and you were rewarded with packs of sweet premium cards that you could immediately sell to vendors for a sizeable chunk of cash, or keep for your own treasure trove.

Some guy complained and the community at large joined in and reveled at the outrage, now judges need to be compensated by tournament organizers rather than by Wizards of the Coast and that cost is being passed on to the consumers. We now have the pleasure looking at $70 constructed format Grand Prixs, which is a significant increase from the the $40 we saw in the past.

How is this affecting us? Well for starters, many of us simply aren’t going to participate in these events any longer. Before I could look at the Grand Prix promo and playmat as a substantial subsidization of my entry fee, knocking an easy $20-25 off the cost, leaving me at $15-20 out of pocket, now I’m  out $50. At a $50 entry fee, I have to evaluate whether or not I’m actually a contender in a tournament; at $15, I can throw my money in the pot without second thought.

But players aren’t the only ones feeling the pinch, vendors are soaking up additional costs to vend these events as well. In the past we’d see more vendors (and more competition) because the table fees were so much lower. Tournament organizers have almost universally instituted a bid system (and a cap to the number of vendors able to participate) to determine who gets to occupy a reduced number of tables. This increased overhead is slowly bleeding many vendors out of the game completely. Now, one bad Grand Prix is enough to knock many of the smaller vendors out of the game completely.

We’ve also now seen a year of the new PTQ system in action. Local PTQs used to be “free roll” events for many vendors and a good fallback to lick their wounds after experiencing a couple Grand Prix events. Being one of only a couple vendors at semi-local events meant that you could promote your brand and make decent money without shelling out a fortune. While it’s true that there was such a thing as a “bad PTQ”, it usually only took one “decent” buy to cover your entire cost for the event and everything beyond that was just gravy.

PTQs were also a good starting point for vendors trying to ramp up to doing Grand Prix events or running a significant online operation, now that the startup capital to break into the Grand Prix scene is almost insurmountable. It’s been said by many vendors that if you aren’t already in the game, it might be too late.

The other issue the RPTQ scene has brought to the forefront is the cannibalization of event participants. Previously, if your dream was to make it to the Pro Tour, you played a half dozen or fewer PTQs in your region spread out over a number of months. Now we’re barraged with multiple PPTQs available to us within a reasonable driving distance every single weekend.

These events are competing directly with each other and large regional events like SCG Opens or Grand Prixs for participants. Players are now being forced to choose between sneaking into an under attended PPTQ or attending a larger event.

While these numbers seem inconsequential, it’s easy for a handful of these tournaments to be occurring within a 3-4 hour radius of an SCG Open with each of them siphoning off a couple dozen players that would have otherwise probably attended the larger event. In a world with $50 entry fees, this can quickly add up to multiple thousands of dollars coming right off the bottom line.

The ride of TCGPlayer over the past couple of years has ensured the general public a constant supply of low-cost cards. TCGPlayer used to be a great tool for vendors to take their Grand Prix buys to market and reap handsome rewards, but now the flood gates have opened and there’s no turning back. With TCGPlayer becoming the storefront of every guy with a backpack and a few cards, traditional brick and mortar stores and GP Vendors are competing with guys that have essentially $0 in overhead costs. The race to the bottom is real and there are few real winners.

For example, I just searched for Blood Crypt and was returned 386 vendors. THREE HUNDRED AND EIGHTY SIX! How far down that list do you think I scrolled? If you aren’t in the five cheapest results, you’re likely not selling a Blood Crypt today.

This marketplace has created a new priesthood within the Magic community. Their places of power are Craigslist ads where you can usually find numerous ads all boasting the best prices paid for your cards and the hundreds of Facebook buy/sell/trade groups, many of which are created and moderated by people looking to skim any value out of the collections being offered before they even reach other readers.

While the race to the bottom benefits us as greatly as consumers, it puts pressure on the GP vendors and LGS owners that essentially subsidized every tournament table we’ve ever played on.

Paper Magic isn’t the only place we’ve seen massive changes in the past couple of years. We’ve seen significant changes to both set redemption and the way prizes are given out on MTGO. Personally I stay away from MTGO because I know it’s a rabbit hole that I would not fare well in, but as these conversations bubble up on the Twitterverse, I’m paying attention.

In the past you could pick up packs for as low as half of the retail price shortly after release as drafters found it easier to go infinite flipping packs than opening them, with the changes in prize payout this has changed and second hand packs are only a tiny fraction below the retail cost.

Set redemption also saw a hefty charge placed on it’s use. I’m not familiar with the exact procedure before and after the changes, but my understanding is that the redemption fee changed from $5 to $25 per set. When you’re in the business of grinding set redemptions, that additional $20 puts a significant barrier to profitability in the way. The increased fees has no doubt reduced the amount of sets redeemed to paper, which in turn decreases the overall supply of cards in circulation.

Large retailers were conscious of the redemption math, and before that tied paper and digital card prices in a sort of symbiotic relationship; if a set was worth significantly more on paper than digitally, you could easily spend the $7.99 to convert digital sets to paper in large quantities and the prices would normalize; but now you’re looking at $27.99 a pop for redemptions, a number that requires much larger discrepancies to be profitable.

The hardest thing to know going forward is what all these changes mean for us going forward. Were Khans of Tarkir & Fate Reforged prices dampened by the changes in the rotation schedule or key reprints occurring in event decks and clash packs? Will increased entry fees to Grand Prix level events cause players to stop going or will we literally pay any price? How will Grand Prix vendors survive with increased competition from competitors with relatively no overhead while simultaneously paying more and more to set up at events?

One of  the things that made #mtgfinance so appealing in the past was the ability to capitalize on predictable patterns, but so much has changed in the last couple of years that many of those tried and true strategies are proving obsolete. One thing is for certain, the impact of these changes has not gone unnoticed at the highest levels; both Star City Games and Wizards of the Coast have recently acknowledged that significant growing pains are being felt and they’re dialing things back to better understand how to proceed.

While none of these changes have “sky is falling” impact on the game, there is a change in the waters and it might take a few bleached reefs before we begin to understand the impact on the ecosystem as a whole.