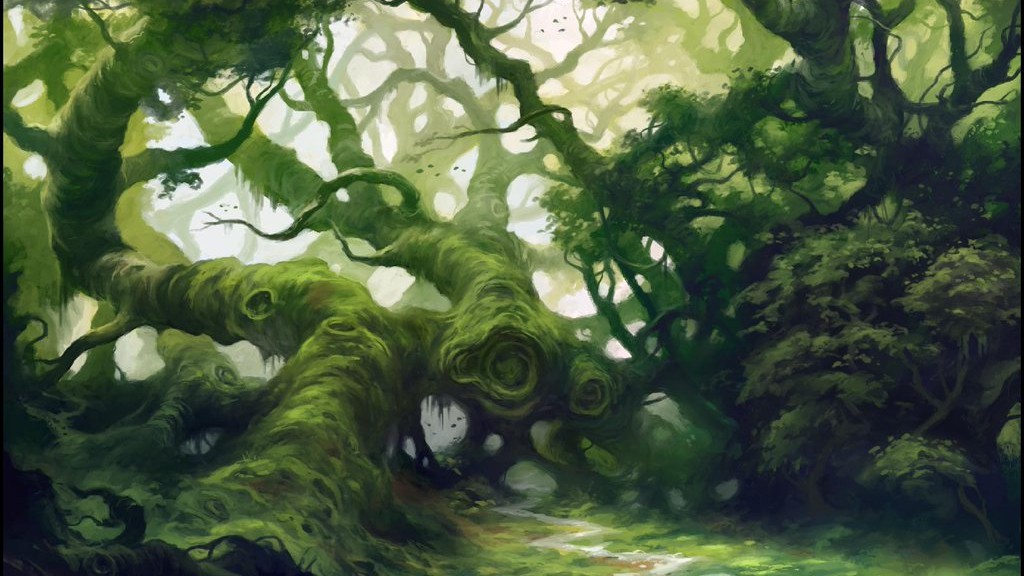 In my never-ending quest to gain value from Magic, I feel like there are times when the correct financial play is obvious. Architect of Thought is $5 when Dragon’s Maze is out? Pick up a few. Hero’s Downfall is $10? Move them out!

In the last couple of years, though, I feel I had a huge swing and a miss recently: fetch lands.

Like many people, I didn’t advocate trading aggressively for fetches while they were in print. I never missed an opportunity to trade for them when they were available, but I also felt fine trading them away as well. There was no point hoarding them, because there were so many and people got the sets and specific ones they needed relatively quickly.

You know, like what happened with shock lands in Return to Ravnica block?

However, the time has come to admit I was wrong in this viewpoint. The allied fetches have seen remarkable growth recently, and I think there are several reasons why.

As always, I want to think about where I went wrong so I don’t do it again. 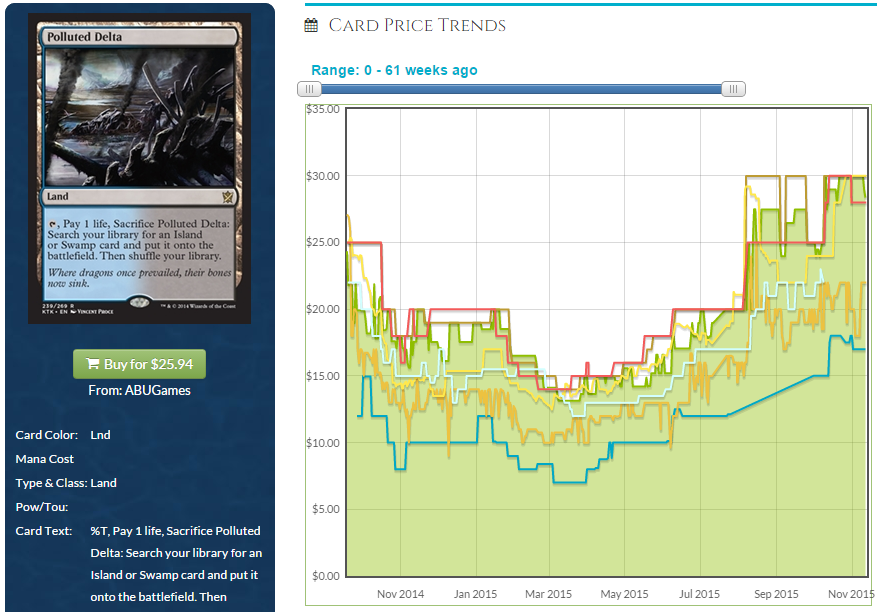 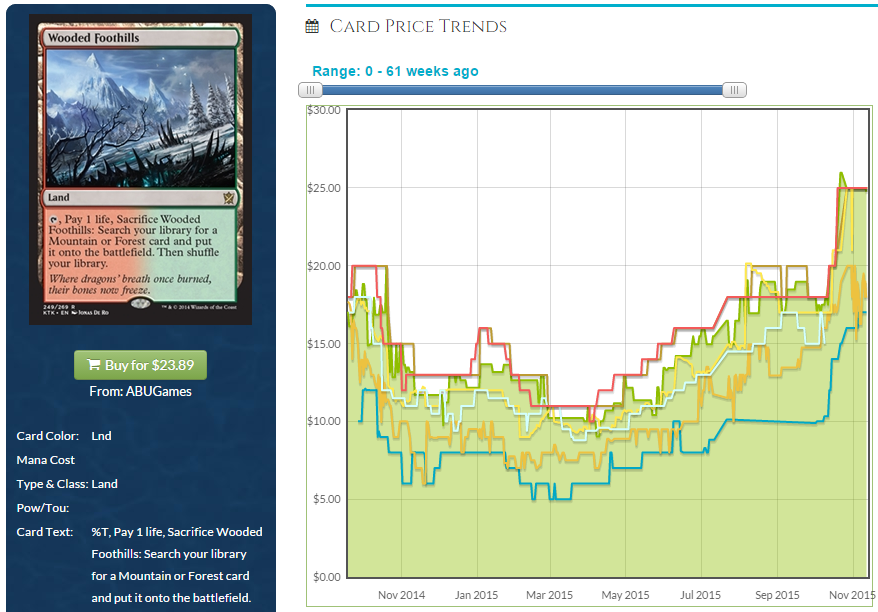 These have doubled since their low point of Dragons of Tarkir. Doubled!

But let’s look at shock lands and compare them. 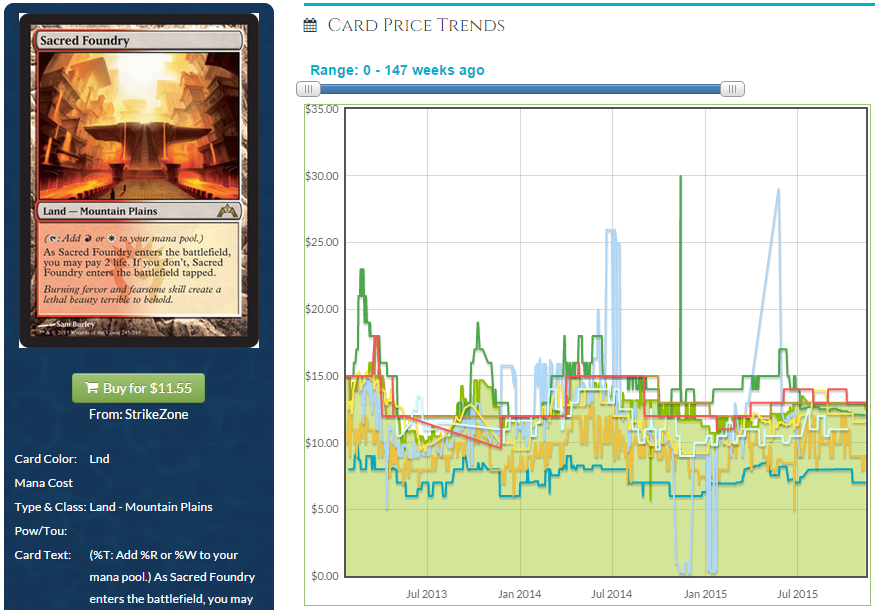 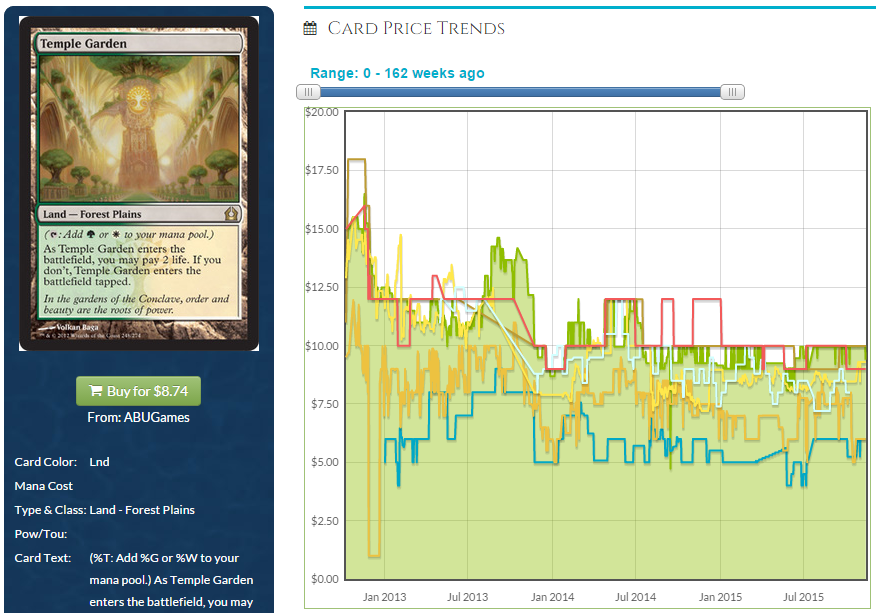 These have stayed relatively flat after they rotated out of Standard, and didn’t move much after a minor spike at the beginning of Theros block, but they went back down until rotation.

I thought that fetches would follow the same pattern: bump a little bit once they weren’t in drafts anymore, but stay stable. I certainly wasn’t expecting Polluted Delta to rise the way it has, or any of the fetches. So what the heck happened?

Factor #1: Theros vs. Battle for Zendikar

Let’s face it: Theros as a set introduced us to devotion as a mechanic. Return to Ravnica block had many good multicolor cards, but the powerhouse decks were focused on casting lots of the same color of cards.

Battle for Zendikar has landfall as a mechanic, and fetches certainly help with that, but the main thing is that the theme of Khans of Tarkir hasn’t faded at all. Everyone still has their Siege Rhinos and playing three or four colors is even easier now. (More on that in a second.)

I overlooked this as a factor in the price. Shocks had already been legal in Modern, and this was just adding to the quantity available. This was also the time when Modern really began to take off as a format, since people could bring their newly acquired shock lands over to this format without having to spend much on the manabase.

The allied fetches hadn’t been legal in Modern before, and that meant players could have exactly as many fetchlands as they wanted, in any color distribution. Also, I expect that not many players want to move their lands from the Standard deck to the Modern deck and back again, so there’s probably a bit more of a drain on the supply.

I know I truly despise moving cards between EDH decks, and I’d hate moving playsets around even more.

Before the reprint, an Onslaught Polluted Delta was up to $120. It was only legal in Legacy and Vintage, and it was the king price-wise. The announcement sliced that value in half, and now it’s trickled down to $40.

Players who wanted Onslaught fetches for their Cube or Commander decks might have been priced out, but when Khans landed, a good amount of the supply went to those players. I know I’ve added those fetches to all of my decks, and I can’t wait for the enemy ones to be reprinted so I can finally get a foil Scalding Tarn without taking out a mortgage.

As a side note, the reprint in Khans of Tarkir did affect foil prices too. Foil Delta went from about $475 to $350. Normally, I see foils as a safe place to put value, especially old-frame ones, but I need to think about what affected this price.

I think this is probably the biggest reason that the fetches have spiked so hard. It’s been a long time since one land was able to get you your choice of four colors of mana. Polluted Delta can get you anything but green mana! In Standard! To get this level of flexibility, you have to go to Modern (and pay two more life) or Legacy (and buy duals!).

When the easy mana of fetches + battle lands is added to the relatively low power level of Battle for Zendikar, you have a formula that pushes players to play lots and lots of colors. This doesn’t even count how delve cards are begging for extra cards in the yard, to the point that Evolving Wilds is showing up in some lists. Even the mechanic of converge for Radiant Flames or Painful Truths encourages multi-color play, and there aren’t any cards yet that strongly push players towards a mere two colors.

The cards in Khans of Tarkir are, by any objective measurement, more powerful than Battle for Zendikar. Being multicolored is a design tool allowing cards to be stronger, because needing three colors is supposed to be hard. Unless you’re paying life or going through other contortions, casting Mantis Rider on turn three shouldn’t be a given, but that’s where we are today.

We are only there until April, though. Shadows of Innistrad lands on April 6, and now we begin the new world of 18-month Standard. I’ve held onto my fetches long enough. I’m trading them now before they begin to fall. I’m not going to try for 120% when I’ve already made 100% gains in value. I’m going to also suggest that if you have fetches in any casual deck, that you take them out, trade or sell them, and then pick them up again in April when they have fallen.

7 thoughts on “Shocks vs. Fetches”