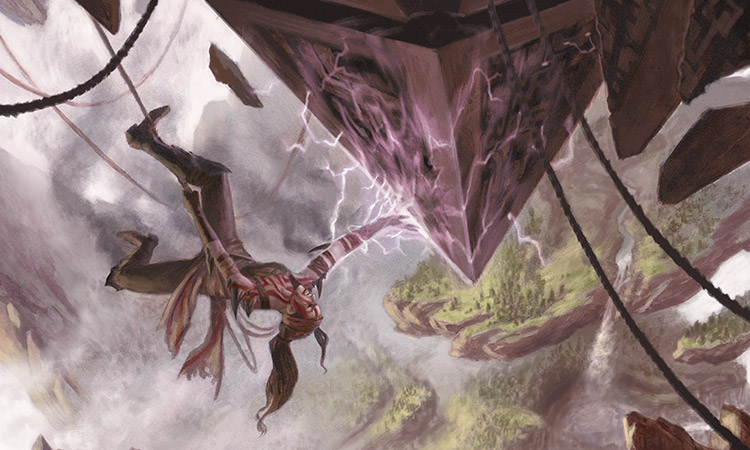 A cold wind blows in from the Northwest as the last dying leaves succumb to the paralyzing reality. Winter is knocking at our doors and the foliage is not the only thing in a state of torpor. The holiday season has always been a hard time to get any real wizarding done and this year’s event calendar is certainly not any help. December has always been light on premiere level events, but this year we have zero Grand Prix events. This comes after five straight weekends of constructed Grand Prixs…maybe we’re just hungover.

Local Magic is suffering as people are abandoning Standard in levels not seen since Caw-Blade summer. This is where I should chime in with an analysis of the competitive Standard environment to explain that it’s much more diverse and competitive than it was when those four little birds were the crux of competitive Magic, but I really can’t. I don’t know what’s going on in Standard because I just don’t care about Magic right now. I said it. I’m bored with Standard and hardly care to attend the dwindling weekly locals.

But I’m almost certainly not alone in this regard; FNMs and local weeklies everywhere are suffering with the main culprit being that players simply can’t (financially or mentally) afford to buy into the current Standard format. Mono-red, the game’s perpetual budget deck, is sporting a mana base that’s approaching $200, and that’s before you even throw in your first copy of Atarka’s Command. We’re playing a format that features the first $1,000 Standard deck, this is anything but an entry level format at this point.

Magic is ultimately a social game and our excitement, or lack thereof, to play is contagious. If you’re used to 32-man FNMs and you show up to a paltry nine players, there’s a good chance that you’re going to consider other options the next weekend, and your absence only adds to the snowball effect of people abandoning weekly tournaments.

The lion’s share of blame for the current state of Standard lies in five stupid lands. The irony here is that these five lands were so successful at making Modern more accessible that people decided to just go play that format instead. After acquiring a few fetches, people took a look around and saw that they could play Siege Rhino mirrors for 18 months, or they work toward finishing their Modern decks and ignore Standard completely.

Despite popular belief, Magic players are constrained by budgets. With the Pro Tour, we’ve heard players talking about “getting on the train,” which is to say that once you achieve silver level in the Pro Players Club the first time, it’s easier to achieve the next time and easier to make the jump to gold or platinum. The same is true for constructing top-tier Standard decks. If you had a tier-one deck in Theros / Khans / Dragons Standard, you probably have one in Khans / Dragons / Battle Standard; but if you started or attempted to return to the game at Dragons of Tarkir or Magic Origins, you’ve been playing catch up this whole time. And if you came into the game at Battle for Zendikar, I’m sorry about your luck, kid, the train has left the station.

Compounding the problems that were already bubbling just below the surface with the expense of Khans fetches is the absolutely dismal power level present in BFZ. Normally when a new set is released you’ll see some reasonable deck alternatives popping up to give players somewhere to start leading into the next block. These decks are rarely tier one, but they’re usually powerful enough to at least battle through a few FNMs without getting repeatedly curb stomped into the 0-4 bracket while we wait for new cards to get printed.

This time, not so much; we have a set full of Wasteland Stranglers. Cards that rely heavily on synergies (that are hardly obtainable in draft) to do mediocre things. The best comparison is I can make is the Rise of Vigil expansion for Ascension; the set contained dozens of cards that did the exact same thing as existing cards only after jumping through hoops to activate them. Why?! This is reverse power creep in it’s worst form. This is Kamigawa… and Rosewater said we wouldn’t ever be returning. 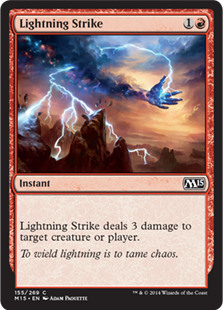 Theros may not have been the most compelling block in the history of Magic, but it featured a set of checks and balances that leveled the playing field. Certain archetypes rely on certain cards existing, and shifting the power level of commons and uncommons down closes the door on those archetypes, creating an environment where people have no choice but to play a pile of rares and mythics. We now have a format where Siege Rhino and Woodland Wanderers are rampaging the countryside, but Lightning Strike is somehow too powerful.

Traditionally, at this time of year we see the tide lowering and prices across the board dropping, both in Standard and Modern. The January after release has long been pegged as the low water mark for fall sets, but if you’ve been watching the weekly interests page, you’ll notice that Standard and Modern cards just aren’t moving. Most of the big movers have been in nonsense Legends and Arabian Nights cards that show up in ’93/’94 decks and other cards with low inventory levels.

Part of this is likely due to the lack of premiere level events and their ripple effect on buy and sell prices, but the majority of it is likely due to a widespread attitude of “let’s wait it out” as players hope that the release of Oath of the Gatewatch will be the shot in the arm the format needs moving forward. I’m not optimistic (am I ever?) that Oath is going to bring any real substance to the mix.

We have little to go on as far as Oath speculation goes, but we do have a gimmicky mana symbol and the promise of “the most cards designed for Two-Headed Giant ever.” Neither of these are selling points for me. Short of tacking “exile the top card of your opponent’s library” to every card in Oath or devoid somehow becoming relevant, this block feels close to a complete loss. These might be the best prices we see for any card in Battle for Zendikar and I’m frankly kind of amazed that they’re holding at current levels. There are only two cards I see any upside on: Gideon, Ally of Zendikar and Ulamog, the Ceaseless Hunger, and even those are tenuous at best.

Here’s where we are likely to part ways, but I’m of the opinion that it’s all downhill from here for Dragons and Origins cards. Pretty much everything from these blocks peaked the second week of October and has been on a slow and steady decline ever since. The chart for pretty much every rare looks similar to Deathmist Raptor’s: 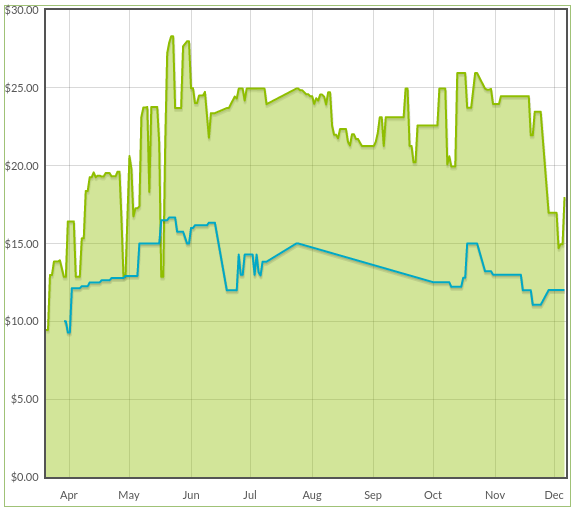 While there’s a chance that we see a second spike on these cards around the release of Shadows Over Innistrad, I’m putting my money on a response similar to what we saw in Khans as BFZ showed up. I’m operating on the assumption that sets are likely going to peak six to nine months after release moving forward, and I have already dumped everything from Dragons / Origins that I don’t expect to play in Modern.

Going forward, we have a couple things to watch for. Chances are good that Oath is going to be just as bad as BFZ, and this sustained “player recession” is going to put pressure on a lot of retailers and organized play in general. Many players are just going to sit out completely until Shadows Over Innistrad or shift their focus to Modern.

If the return to Innistrad follows the same pattern we’ve seen in the last two “return” blocks, we’re in for another shit show. Return to Ravnica was serviceable as a return block, but succeeded mostly on the strength of a few guilds carrying the weakness of others…I’m looking at you, Simic. BFZ has been a pile of gimmicks that are neither cohesive nor compelling and we can expect any return to Innistrad to be laden with mediocre demons, angels, and vampires taking up more than their fair share of the rare and mythic slots.

Shoehorn in some werewolves and a couple watered-down graveyard mechanics and there’s little room left for anything fresh and new. If we’re lucky, we’ll get an Avacyn’s Pilgrim reprint so we can play with a reasonable mana dork again, but it’s becoming apparent that Wizards is moving away from mana dorks at one mana in the same manner that we’ve moved away from Rampant Growth effects at two.

The other issue we can expect to rear it’s ugly head going forward is the two-set dynamic does not leave room to both pay homage to the previous block and introduce something new, leaving us without the critical mass to power the synergy strategies and shifting Standard to solely be a “best cards” format.

If Shadows falls flat like BFZ and lacks the full-art lottery tickets, we might see the first year with a decline in Magic sales and a stagnating Standard player base, which is only going to put more focus on Modern—the format that players demand and goes against Wizards’s entire primary business strategy.

I’d love to hear what Standard looks like in your area. What’s attendance like? What are players saying about the format? How many have dropped the mic, never to return?

21 thoughts on “Going Mad – Why Standard is Becoming Less Relevant”