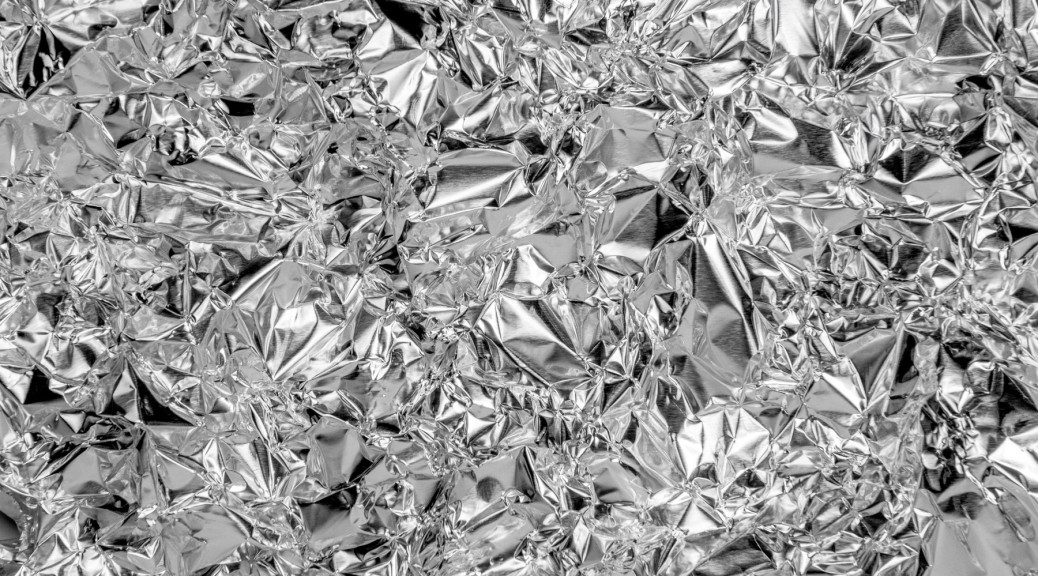 I’ve mentioned my all-foil deck before, but it only recently occurred to me that a decklist isn’t a bad idea, particularly in regard to the investment that this turned out to be.

I finished foiling this deck out in 2013, not long before I started writing for MTGPrice. The deck has changed slightly, and for today’s purposes, it’s worth mentioning that I had the other filter lands and Sulfur Falls, but the prices on those cards went so bananas that I felt I had to sell.

Today I want to make the case to you that foiling out a deck, a cube, or a collection is more than a way to satisfy the inner magpie, it’s an investment in a lot of ways.

This is the basic tenet for picking up foil versions of cards. Foils are currently printed when the card is in Standard, when there’s a special set that has foil versions (such as Conspiracy or Modern Masters) and short-run special printings, like Judge promos, alternate-art versions in Clash Packs, and From the Vault sets.

That’s it. The card is in Standard or it’s a special reprint to get a foil version. This includes Magic Online redemptions, as that’s only an option for a limited time.

Because there are not only less foil versions as compared to the nonfoils, and the options for reprinting foils are significantly fewer, there just won’t be many foils. This leads to the foil multiplier, an unofficial metric that I use when figuring out how hard to chase a card.

Usually, a card in foil is about two to two and a half times as valuable. This general rule works for almost any card that isn’t subject to greater Legacy/Modern/casual demand, and variations in that rule indicate one of two things: The card is in great demand because it’s ubiquitous, especially in Standard; or the demand for a special version is much higher.

Let’s look at a few examples:

Anafenza, the Foremost is 5.99 regular and $13 in foil, including the Prerelease promos. She isn’t in heavy foil demand, keeping the multiplier at a little above two.

Rending Volley is 55 cents nonfoils, and as far as foils go there’s only Amazon at 4.49 and Card Kingdom at $6. Bouncing over to TCGPlayer, we see that the lowest is about $6 before shipping. That’s a multiplier of about 12, and a sign that the card is being picked up in older formats. Sure enough, it’s a popular sideboard option in Modern and occasionally Legacy.

The Chain Veil is $1.36 in normal and about $7 in foil, entirely due to casual demand. The only decklists I can find for it are Commander decks with lots of planeswalkers and that want to repeat using their effects over and over.

Checking the foil multiplier is how I like to gauge its appeal outside of Standard, and is a good measure of its likely future value.

Philosophy #2: Foils are more resistant to losing value when reprinted.

Note that I am not saying immune, I’m saying resistant. The price will likely drop at first but it won’t drop as far and it will eventually recover. Elesh Norn, Grand Cenobite is an example. 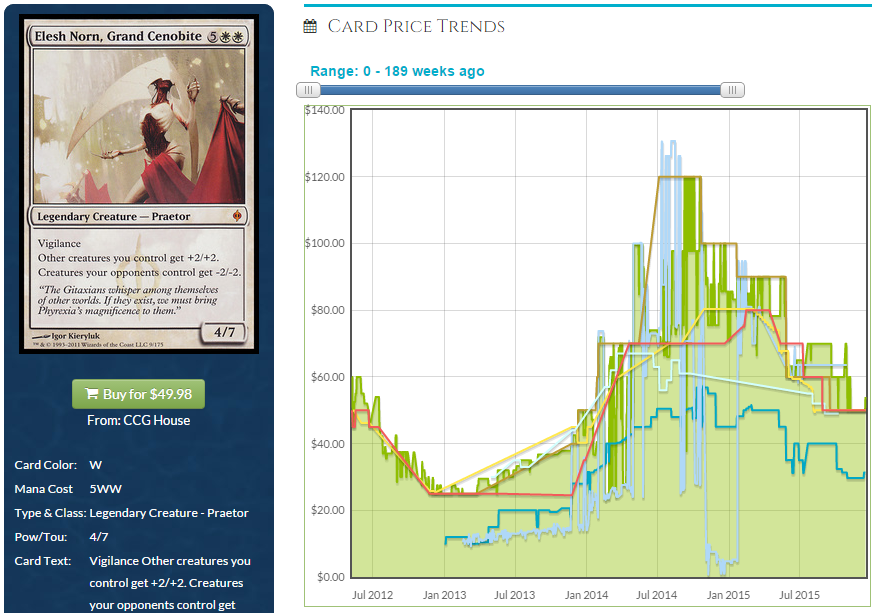 She took a hit, being a foil in Modern Masters 2015 but it was for about 30% of her value, as compared to losing more than half with the nonfoil. The judge promo also puts a limit on her upper value, as it represents a very chase target, especially being written in Phyrexian script.

Notice, though, that large period of time when the foil was in the sub-$40 range. That’s the goal and the dream. If you foil out your deck when foils are new, then the price is perfect.

When a foil is reprinted, it’s very rarely in the same art and the same frame. Even when it is, the price will often rebound over time.

Case in point: Phyrexian Arena. Even with three foil versions (Apocalypse, 8th, and 9th) the card is old enough and awesome enough that all the versions are about $60.

Philosophy #3: Foil lands are often the hardest to acquire, the most expensive, and therefore the safest long-term value.

The cards that took me the longest to acquire were the Ravnica block bounce lands. No store had them in stock, and it seemed like no one had them for trade. Ever. It was easier to find filter lands, shocks, and everything else, but those bounce lands took me six months past the rest of them to get. Only when I saw on a message board that someone was breaking up a foil Cube did I get these lands.

Interestingly, those bounce lands had started to really increase in price from a stable $4 when Modern Masters 2015 came along. The originals have kept most of their value, while the new ones are about half that price. I think scarcity is at work there, in that the original foils are in decks and not in circulation.

I’m going to be watching the foil prices of the filter lands closely now that the Expeditions lands have been spoiled. Is it going to depress prices? Hold down the upper ones? Will the originals be on the market if lots of people upgrade to the newest versions?

Philosophy #4: Foils can be in worse condition, and there will still be a market.

Trust me on this: People who want foils want the foils badly. Being in less-than-perfect condition isn’t much of a barrier to acquisition. I wouldn’t give full value, don’t get me wrong, but a SP foil of a card I need in foil is going to have me drooling hard.

Selling the SP/MP/HP foil is not easy, but when you find the person who wants to have it, they will happily take it off of your hands.

Philosophy #5: Nonfoil reprints can increase the price of your foil.

Let’s look at Black Market, the foil from Mercadian Masques. 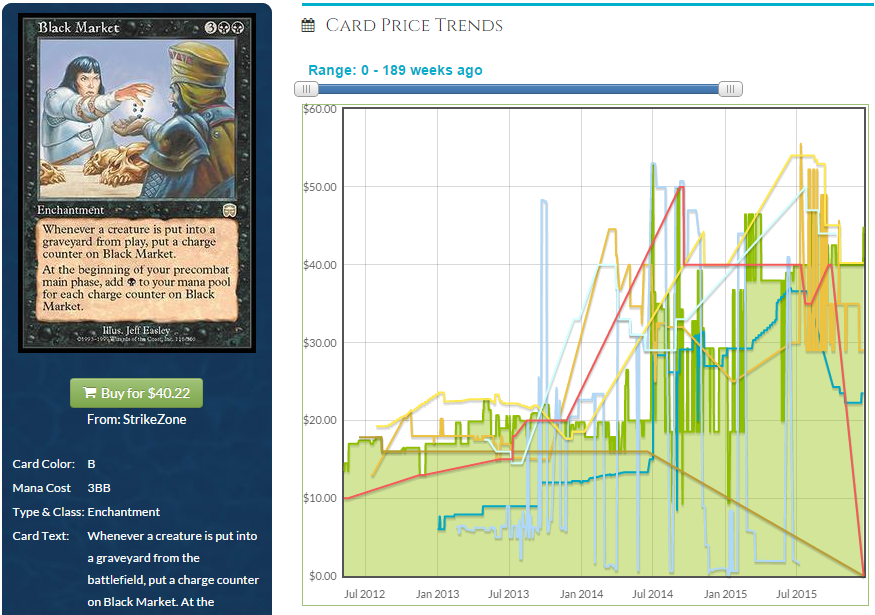 Being a $4 card in the newest Commander set hasn’t budged this price yet. But what it has done is increase the number of people who know about this card. From there, it’s only a matter of time before the larger number of decks it’s in translates to a greater demand for the foil.

Another example from two years ago: Forced Fruition. This was one of many cards to see a spike because lots of Nekusar, the Mindrazer decks. The nonfoil spiked, as did the foil. If this had been Standard, then the foils wouldn’t be much more than the regular version. Instead, we have a foil multiplier of a little more than two.

If you want to share other tips, tricks, or reasons to go foil, please feel free to comment. I try not to have this be a humblebrag about how I got in before things got expensive, but that’s what happened. It can also happen to you, if you start foiling now.

6 thoughts on “Foiling for Fun and Profit”