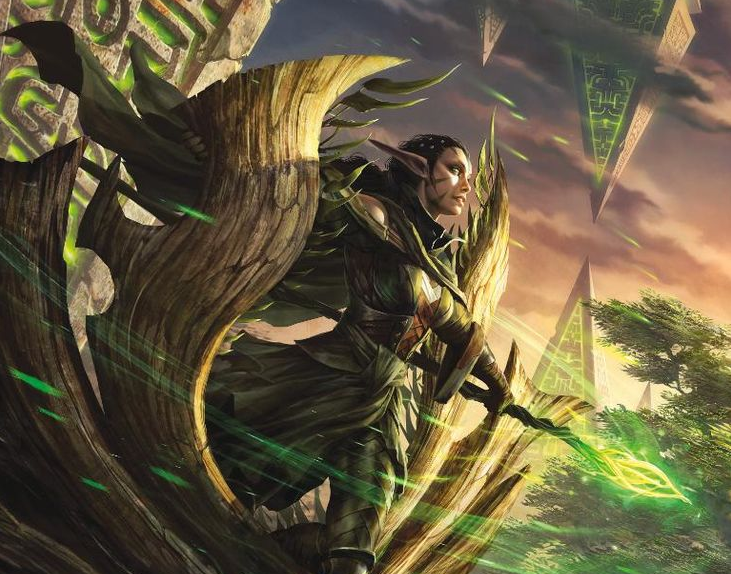 The first card I want to talk about that I’m really excited for from Oath of the Gatewatch is Nissa, Voice of Zendikar. I haven’t seen too many mentions of this planeswalker yet but I want to point out that she is a perfect slot into the previous Pro Tour breakout deck, Bant Tokens from Pro Tour BFZ. As you might recall, Sam Black and crew piloted this deck to amazing success at the last Standard Pro Tour. Now, I’m not saying that this deck is going to take down a huge tournament right out of the gate again – that is presuming too much on my part, where right now really I’m just trying to get a feel where the metagame might be going. Dark Jeskai is a much faster and more consistent deck than Bant Tokens, which is why it has fallen out of favor since the release of Magic Origins and the ubiquitous adoption of Jace, Vryn’s Prodigy (the little Jace that could). However, Nissa adds some versatility and stall to the deck that is desperately needed.

Putting out 0/1 plant tokens and having the ability to pump your whole team is nothing to scoff at. She fits right into the curve at three mana, with a four mana followup Gideon being extra special. Plus, since we’re playing eight planeswalkers in a deck like this there might even be room for the new Oath of Nissa enchantment. At one mana, we can’t discount the usefulness of this enchantment since it acts practically as a one mana land tutor (and if there are better cards than lands well so much the better!) and then on top of that provides perfect mana for the three mana Nissa into the four mana Gideon, which normally would be somewhat difficult at the best of times due to needing two green for Nissa and two white for Gideon. Being Legendary for this enchantment isn’t even a drawback – you’ll never need more than one in play at a time, so feel free to keep casting more to continue digging for cards you might need off the top of your deck. I really like this enchantment a ton, since it feels like a fixed Sylvan Library or Sensei’s Divining Top that is still fine for a format like Standard.

Nissa is currently preselling for $20, which I think is extremely cheap for a planeswalker that could definitely have four copies in the updated deck. Again, along with cards like Hangarback Walker and Gideon, Nissa adds another element of ongoing token generation and threat that needs to be dealt with. Typically, three mana planeswalkers have proven to be powerful and I would not be surprised at all for Nissa to help new and existing archetypes as the OGW Standard metagame pans out.

Oath of Nissa is preselling for a bit more at $6-$7, which I think is pricey for a Standard rare. Remember, we are in a totally new era for Standard rare card prices, so I’m not expecting Oath of Nissa (even if it is found in a playset in a Tier 1 deck) to ever stay above $5 for long. There are just too many Standard rares out there these days, and if you consider the amount of product that will be opened for Expeditions in this set, you have a recipe for long term lower prices across the board on all set rares. I mean, if Siege Rhino could never break $5 for long, I certainly don’t expect this enchantment to. Next, I want to talk about this guy, Reflector Mage. This card seems really good to me. Obviously since it is an uncommon, the price ceiling is going to be something like $2, especially since it is a multicolor… but wow is that effect nice! I mean, this card could even see play in Modern or Legacy. Not being able to cast the card again during your opponent’s next turn is devastating, especially for combo-oriented decks. Plus, you don’t even have to cast this guy to get the effect – all you have to do is have him enter the battlefield, so the trigger still works with stuff like Aether Vial. Just wow, very excited for this card and the possibilities it has in Standard and beyond. OK, now this card is what I think that Snapcaster Mage was supposed to be. Now, this card has limits that Snapcaster does not – first, it doesn’t have flash and it will always cost at least five mana to cast. So we’re not going to see any four mana Anticipates with a body being cast in Standard. Even though this is a terrible Snapcaster for eternal, you are getting a ton of value for you mana when playing this in Standard. It provides a 4/4 body with (some form of) evasion that primarily allows you to flashback an instant or sorcery card from your graveyard. Just because this isn’t Snapcaster Mage doesn’t mean that we should count the Dark-Dwellers out – on the contrary, I think this card will be great in Standard and I expect to see Atarka Red or other decks adapt it quickly in the new metagame.

Also, Commander is a Thing…

Along with some awesome new Standard tools, we’re getting some great Commander staples that I’m sure have been causing some buzz since their release. Obviously leading the wave is Kozilek, the Great Distortion, which is the big nasty Eldrazi that all the casuals have been swooning over ever since #Oathgate happened where key pieces of the set were spoiled on /r/magictcg. This guy is going to have casual appeal for years and years to come, so the play here is to wait about three months after the set’s release and then pick up your copies for stocking away for a rainy day. Like the past Eldrazi bretheren (and even the new Ulamog, which is starting to rise in price again…) this will be a great addition to your portfolio for years to come. The key is to time the market right and try to get in on the low point, hopefully when it hasn’t found a home in Standard and the set has reached market saturation. Holy crap is this Sphinx bonkers in Commander! As if blue wasn’t oppressive enough as it is! If this “resolves” (since there are ways of getting rid of this on the stack that aren’t counterspells) it is going to be so, so difficult to stop the combo player that just dropped this thing on the table.

This card has to be the one of the most protected cards in Magic, and that is saying something. Yes, you can still wipe this with something like Wrath of God, but you’re playing against a blue player! Who is almost always going to have countermagic to back this up. Sure, it costs a ton of mana, but in more casual playgroups I can totally see this thing running away with the game.

I’m actually really glad this card isn’t Legendary, because having this as your general would be super oppressive. Geist of Saint Traft is pretty bad but this would be even worse since you can’t counter it. Just my two cents, maybe I’m overrating this card, but when I first saw it I couldn’t believe that Wizards made a card that is such a potential lockdown against you. Finally, the last card I want to mention is Thought-Knot Seer, which has been getting a ton of buzz from the Commander crowd. A four mana 4/4 with Thoughtseize+exile attached is really, really good. The fact that you get to let an opponent draw a card is irrelevant in multiplayer, since you can make an ally or other opponent that isn’t a combo player have a card.

Since most Commander decks play lands that generate colorless mana, this is an easy slot into many decks. I for one can’t wait to update my Karn, Silver Golem deck with all the great new toys in the set, including putting basic Wastes into there so I don’t get blown out by cards like Ruination or Wave of Vitriol!

All in all, I’m really excited for OGW for both Standard, Commander, and beyond. This set is much more exciting than Battle for Zendikar, because not only do we get Wastes and add a brand new Basic Land to the game, but we also get much more powerful Eldrazi and Allies (along with an Ally Commander, which has a five color Commander identity and is easy to cast!) that many players are going to desire. Not sure if I’m onboard with whole 2HG theme for the release or whatever – personally, just always give me one-on-one matches. For those that enjoy that, though, you have something else on top of all the new cards to look forward to!