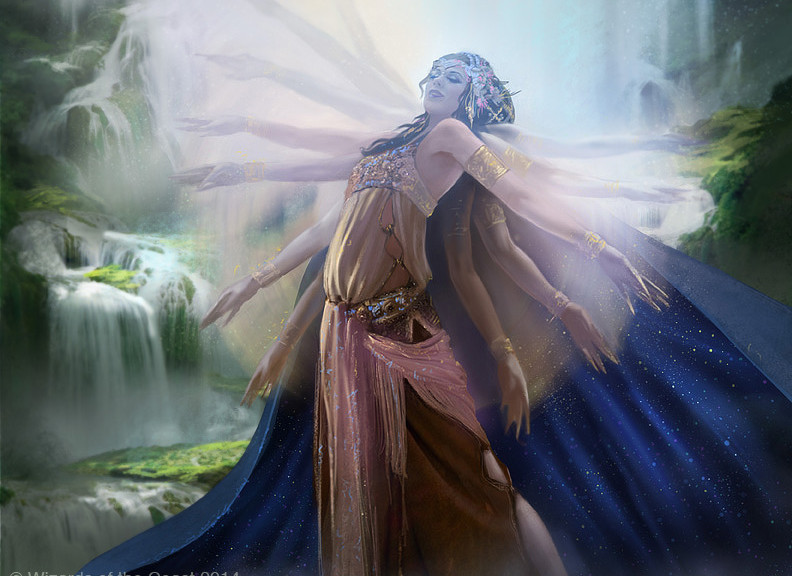 We got some surprising bans in Modern this weekend, but I’m not here to talk about that. You have probably read so many EDH articles from me between MTGPrice and Gathering Magic that I imagine people will wonder if they even want my opinions on Modern.

I mean, maybe they do. I said to buy Night of Soul’s Betrayal at $4 and it spiked hard, just in time to tank because no one needs to worry about beating Pestermite and Deceiver Exarch anymore. 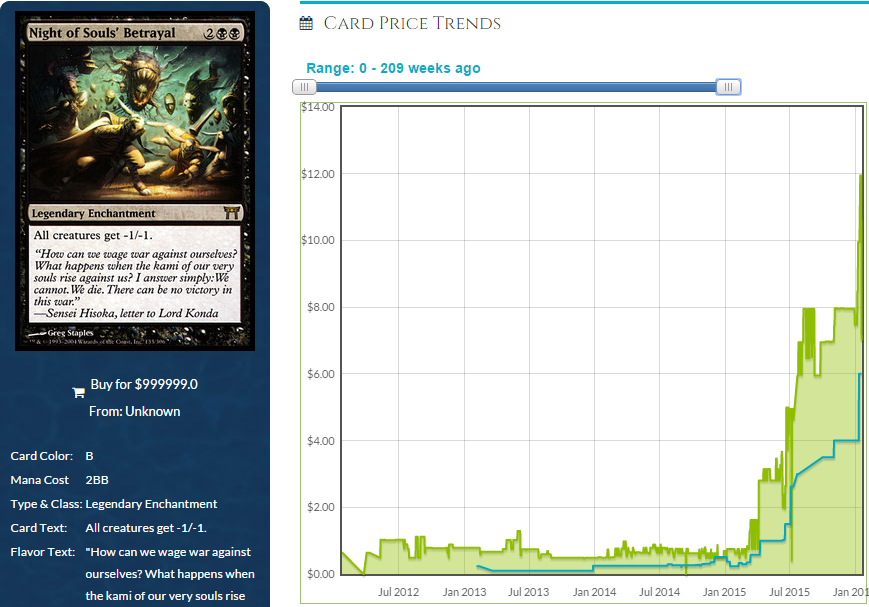 But you’re right, you don’t want my opinion about Modern, so let’s not talk about the Modern bannings and their implications. If you want that, you can read literally every other finance article written this week. Instead, let’s delve into another interesting banning, one that no one is really talking about fully.

The full announcement is available here.

Yes, Prophet of Kruphix is banned. Yes, I’m upset. No, I don’t think this is super-duper relevant financially for the most part. However, there is language worth discussing.

With traditional boogeymen such as Consecrated Sphinx, you’re forced to expend a lot of your mana to cast it and will have a challenge protecting it as the turn goes around the table. With Prophet, it has virtual protection built in, negating that disadvantage almost immediately.

If this doesn’t say, “We’re not banning Consecrated Sphinx any time soon,” I don’t know what does, frankly. I don’t know that anyone was holding back on buying Sphinx, but there was always a little tension since it was always whined about in the same whiny paragraph as Prophet of Kruphix whenever whiners whined about EDH. With the future of Sphinx all but assured, new confidence in the card should push anyone who was on the fence about it off of the fence. Buy them now if you were holding off, because stock is low and I bet this dries up the last few loose copies. I expect this to end up higher than it is now. 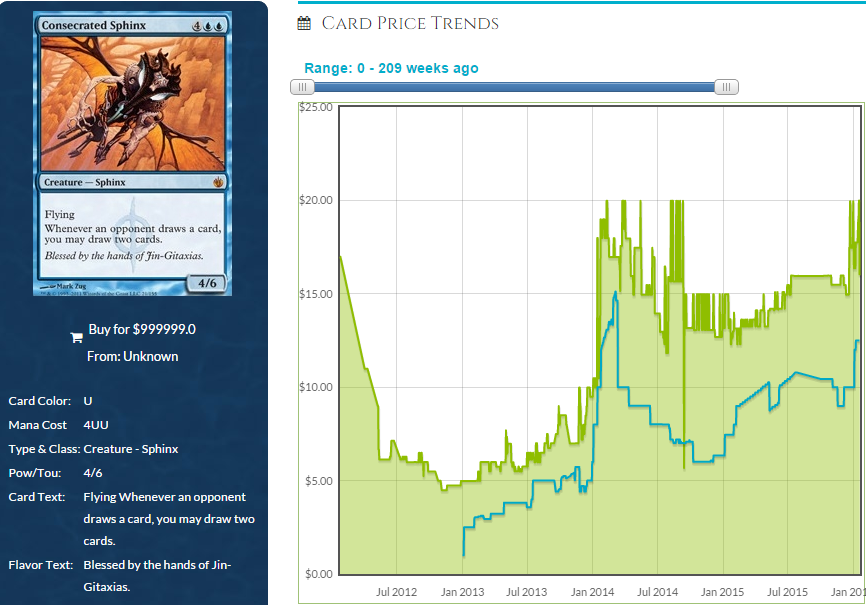 I’m writing this on Monday and there are a lot of $18 copies, but some jackass is trying to get $40 for his on Amazon even though there are foils for $42 on also Amazon.

If this article was too late to pick these up at this price, you should follow me on Twitter (@jasonealt), I guess. I tweet about Magic finance sometimes and even when I don’t, I’m tweeting jokes, and isn’t that half of the reason you read my weekly screeds? If I write an article with no finance content, no one complains, but if I don’t put enough ha-has in your heads every paragraph, I get a bunch of emails asking what’s wrong. Reddit is full of bad advice and bad detective work, Facebook is full of racists, and Twitter is full of people asking dumb questions. My wife is so pregnant right now that we didn’t have any ornaments on the bottom two feet of our Christmas tree, and she could pop any minute and Netflix took House of Flying Daggers off of its list in November and I just noticed now. David Bowie and Glen Frey are dead and Ted Nugent is still alive. Lots is wrong right now. I guess what I’m trying to say is that this is a good writing gig and thanks for reading, nerds. If there are any Sphinxes left, make sure and get yours.

What takes a hit? EDH isn’t a format where a ban takes out one-fifteenth of your deck and can remove the one card that makes the deck work (unless it’s a Commander, obviously). It’s a format where you lose one percent of your deck and you can usually recover. Am I going to scrap my Vorel of the Hull Clade deck because I can’t cheat at Magic and take every turn? Nah. I’m going to put in a Seedborn Muse or one of the sweet hydras I don’t have room for. (I don’t expect Seedborn Muse to go up, by the way, because it’s not the same card and isn’t that important to do half of what Prophet did.)

I’m really deeply saddened to lose literally my favorite EDH card in Prophet’s banning, but I don’t see it making any of my decks worse. If you have a Kruphix deck where you make hella mana with Prophet of Kruphix, sure, I guess you get a little worse. In general, though, Prophet being banned means the guys with a big box full of Prophets and who traded for another foil one on Saturday (you know, me) eat it, and that’s about it. I think there is a bigger financial impact buried in the announcement and we should talk about it, but first…

After examining several popular options, and coming up with a few of our own, we’ve concluded that the Vancouver Mulligan (with the standard first-one-free in multiplayer and a scry once you go to 6 or fewer) is the best option. The RC continues to use and recommend the Gis (“Mulligan 7s to a playable hand. Don’t abuse this”) for trusted playgroups, but that’s not something that can go in the rules.

Seriously, this is a good change, but it doesn’t matter financially. I’m sure some nerd can come up with some circuitous sequence of events that will make someone some modicum of money and that would make the Rube Goldbergian sequences from the latter Final Destination films look like the plot to a porno by comparison. For the most part, though, this change is all upside and is largely irrelevant, but had to be addressed because it was included in the announcement and allowed me to set up some “The Obvious One, The Irrelevant One, and X” rule-of-three device for the article which is psychologically satisfying to me as a writer, and I’m glad it worked out that way.

Anyway, Rule 4 in EDH was a rule that limited the mana you could generate with respect to color. If your commander was Kruphix (be strong, Jason. Don’t let them see your tears) and you had a Birds of Paradise, you could tap it for blue or green and that’s all. Since there were no other colors in your general’s identity, you were limited to those two colors. This rule changed for two reasons.

…the mana system of Magic is very complicated, and trying to insert an extra rule there has consequences in the corners. Harvest Mage. Celestial Dawn. Gauntlet of Power. And now, colorless-only mana costs.

Being able to generate colorless mana more easily in Commander wasn’t going to break anything. But, it represented another “gotcha” moment for players, who were now likely to learn about Rule 4 when someone exploited the colorless loophole. We could paper over it (both “mana generated from off-color sources can only pay generic costs” and “you can’t pay a cost outside your color identity” were considered), but a lot of the flavor would be lost in the transition, defeating the purpose. Without the resonant flavor, Rule 4 was increasingly looking like mana burn – a rule that didn’t come up enough to justify it’s [sic] existence.

Not only was the rule a little bit archaic and not that necessary, it was going to be very confusing for players when you factored in the new “pure” colorless. You can’t use that Birds of Paradise for a mana to activate your Endbringer with this rules change. Basically, this is upside. Sure, you can’t use your City of Brass for a colorless mana to activate your new Oath of the Gatewatch Eldrazi, but you can tap that City of Brass to generate a black mana in that Kruphix deck to play a spell you have taken control of somehow. This change makes what we said about pain lands essentially being tri-lands in post-Oath EDH still true, and it also has a few implications for good cards becoming better. So if we have lands that generate any color in a deck that isn’t five colors, what’s going to get better? 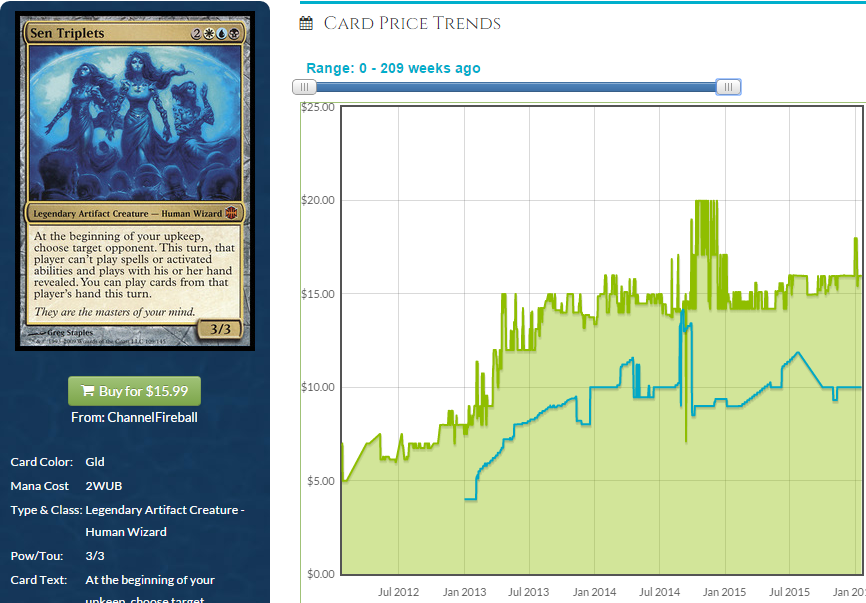 Awww, yiss. Stealing their cards is fun, but now it’s way easier to cast those pilfered spells. Lands that tap for a mana of any color are suddenly very, very good in this deck. You can load up your mana base with a ton of them in a Sen Triplets deck. You can run three Vivid lands for starters—I don’t see any of them becoming all that expensive as a result of this, but Sen Triplets has a little room to grow if the deck gets more popular, and any cards that are used in that deck to a large extent get very good. Celestial Dawn, ironically, gets a little worse, or maybe just a little less necessary but still pretty good. 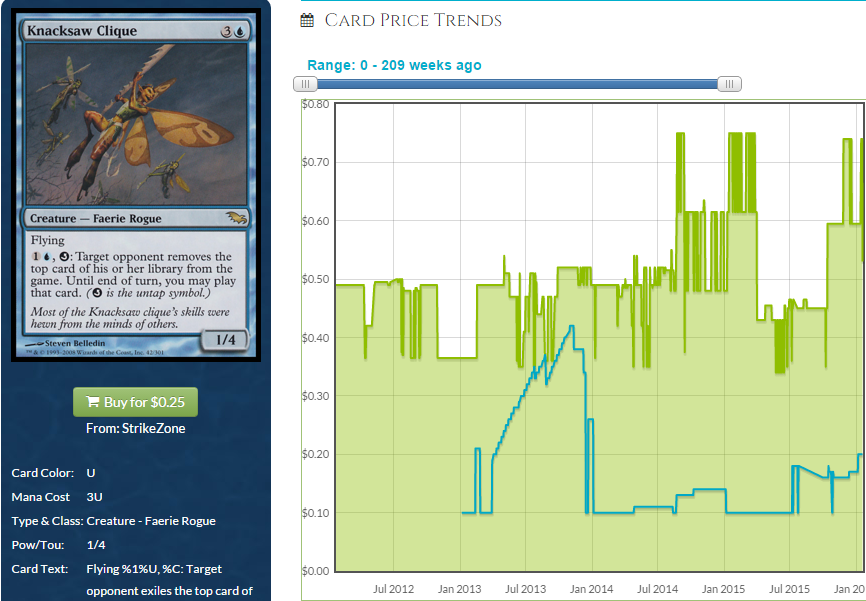 This guy plus Springleaf Drum, right? 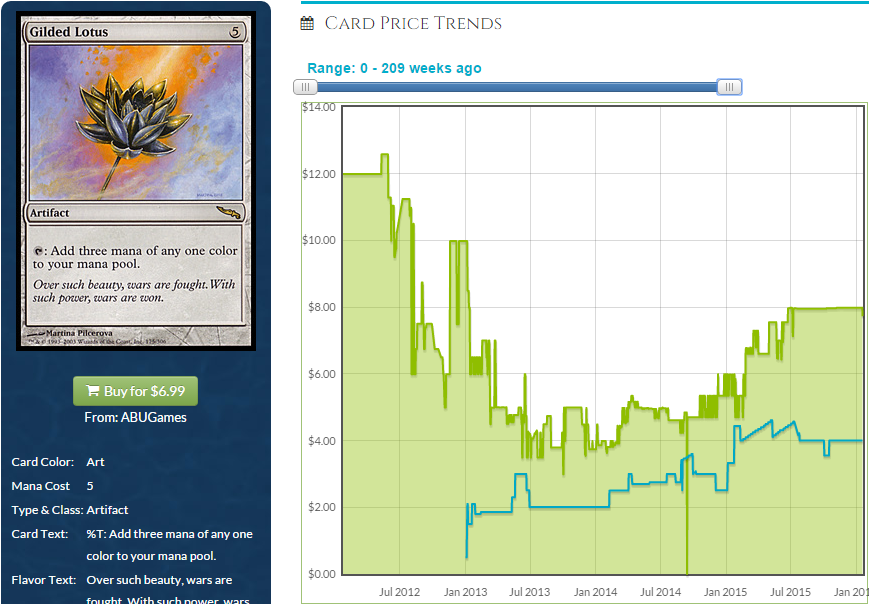 Hey, this does stuff, right? 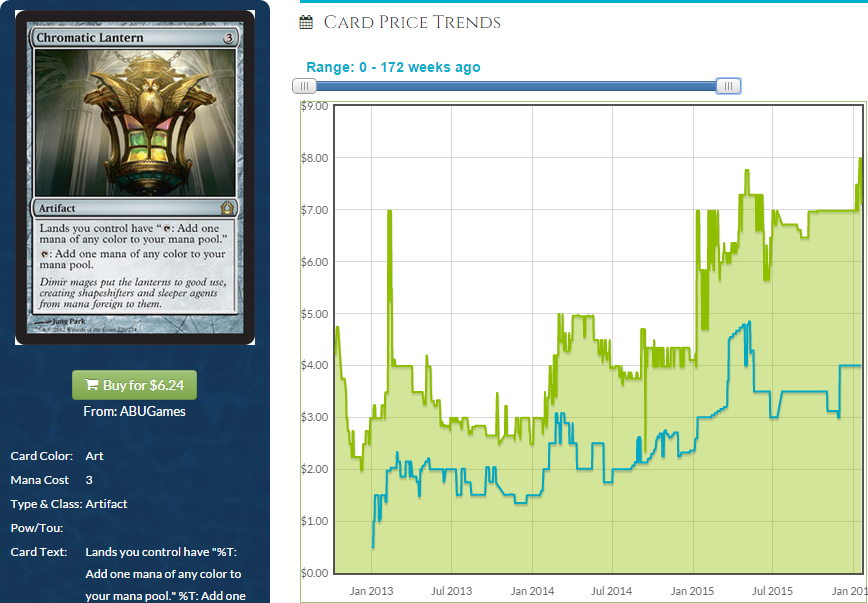 Any hope of getting a Lantern sub-$10 next week is a pipe dream. This is now a much better mana rock, as if it wasn’t insane before, and decks like Sen Triplets can use this to full effect. Stealing their spells and powering them is trivial with Lantern. I would flip these quickly, since I can’t imagine Lantern not getting a reprint in a supplementary product if it goes above $10. 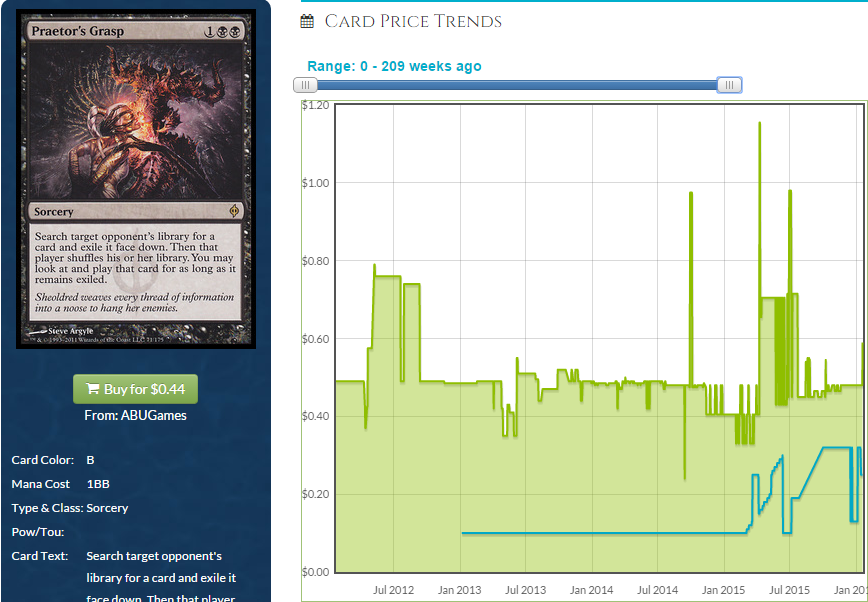 This has been a penny stock of mine forever, and now it’s getting even better now that you can cast something other than their Sol Ring or Solemn Simulacrum or use this as a bad Jester’s Cap. Being able to cast anything is amazing if you can come up with the colored mana. Remember, you can’t just jam a Gruul Signet in a Sen Triplets deck, since the mana symbol on the card still precludes it, but cards that used to tap for colorless because they produced a mana not in your commander’s identity can now tap for any color.

It isn’t just casting their spells that gets better, either. 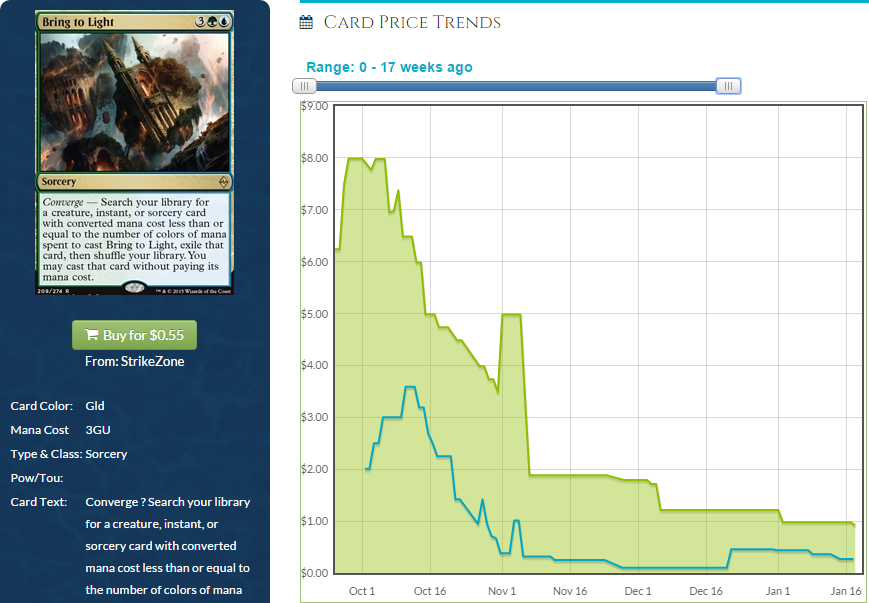 Casting this with five colors in a two-color deck is saucy as all get-out, and that’s exactly what you will be able to do if you have enough Mana Confluences and Forbidden Orchards in your mana base. 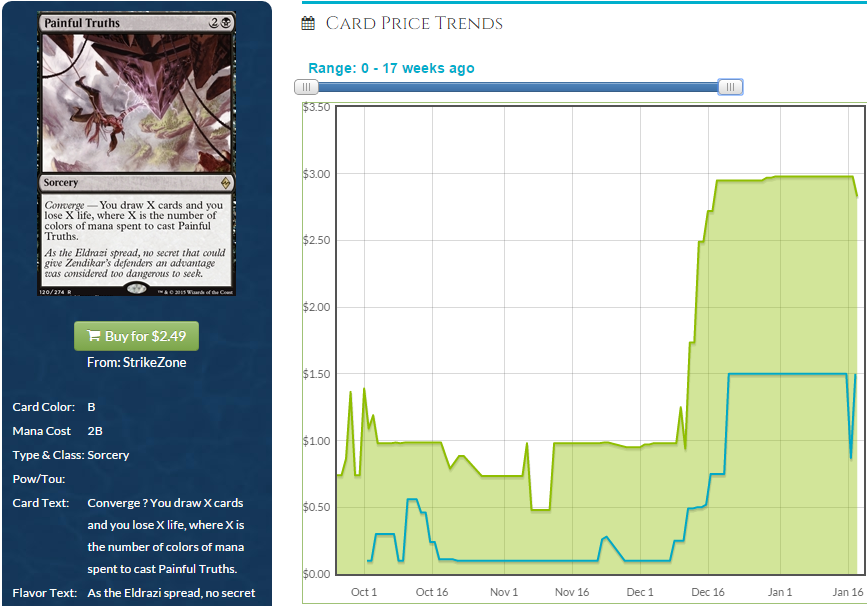 Ditto on this guy. These cards were never designed to be super amazing in two-color decks, especially not in EDH, but with a new paradigm, they are looking a lot better. 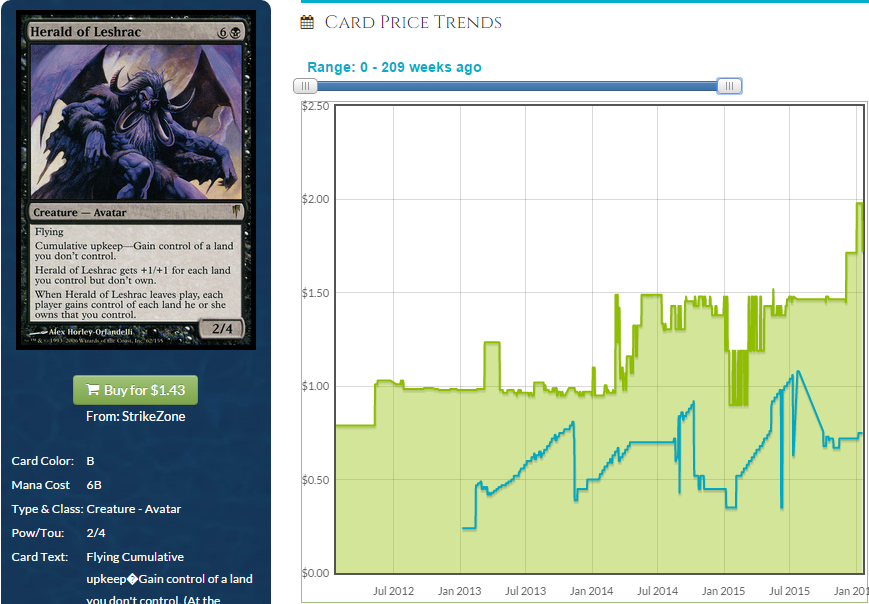 You mean I can use the lands I take? Sounds amazing. 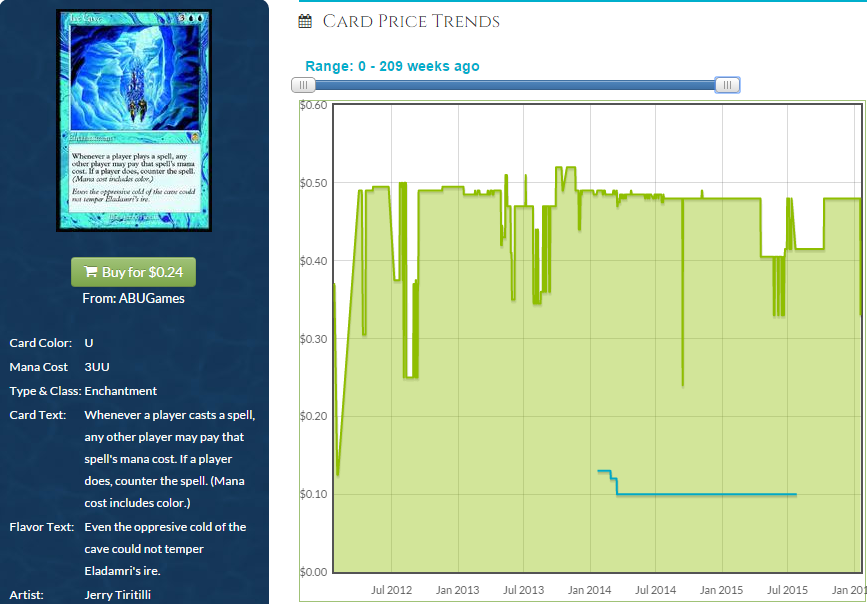 At this point I may just be grasping at straws, huh? 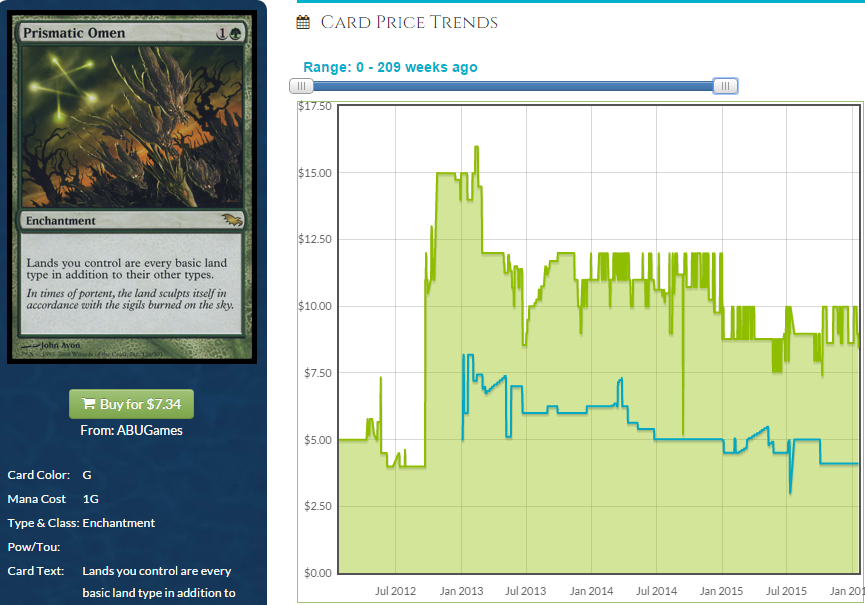 Any G/x deck can jam this, now. That doesn’t suck.

Anything with converge or sunburst suddenly deserves a second look. Lands that add mana of any color to your mana pool should get a second look. Cards like Sylvan Caryatid and even Orochi Leafcaller get a second look. People spent a lot of time fretting over Prophet of Kruphix today, but looking a little deeper, we found a new paradigm in EDH that is a relatively rare but can be exploited for an advantage, and which can push a few cards up in price. Particularly, I’m very worried about how good Lantern is going to be all of a sudden, and its price could get out of control in the near term.

That does it for me this week. What do you think: was this super obvious or was it valuable analysis? Did I miss a card you think has upside with the rules change(s)? Am I underestimating how bad losing Prophet is going to be for your deck? Sound off in the comments and I’ll try to resist the urge to make fun of how you spell your name. Until next week!