So a new set is here, and while our eyes are immediately drawn to the new shiny things, this is the exact time that we want to be thinking ahead.

Khans of Tarkir and Fate Reforged are going to rotate in April, when Shadows over Innistrad arrives. This is the beginning of the new rotational schedule, 18 months in Standard instead of 24. What I want to look at today are the cards that are currently underpriced, since they are in Battle for Zendikar and the supply is just about at maximum.

My philosophy for years has been to trade for these types of cards now and then trade them away in six months or so, when demand is high and yet it’s no longer being opened. An example of this in action is Hero’s Downfall. 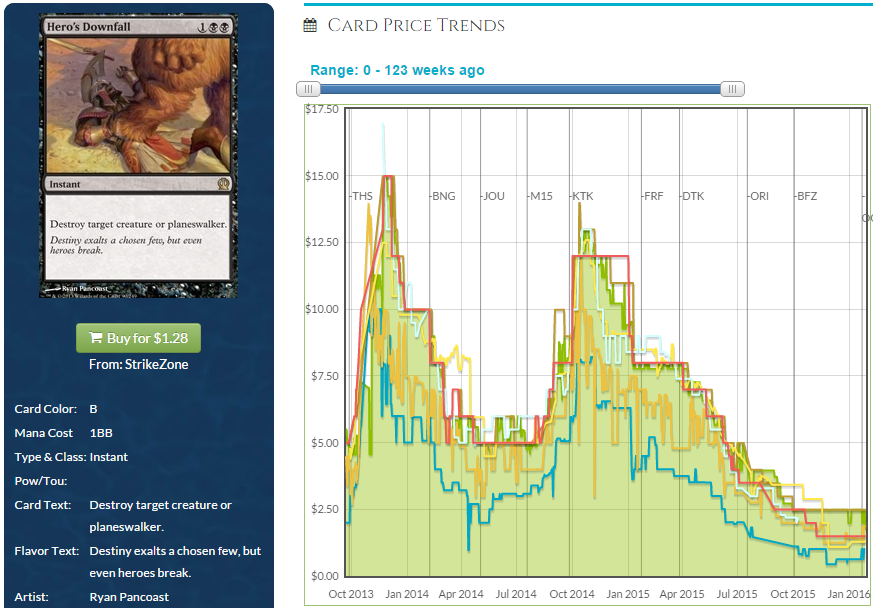 That low point, during Born of the Gods and Journey into Nyx? That’s where we are with Battle for Zendikar. See that spike during the beginning of Khans of Tarkir? That’s my exit point.

I’m not skilled enough at deckbuilding to say with certainty what decks will be good and what won’t after rotation. What I do know is this: losing the fetch lands is going to hurt these four-and-five-color monstrosities, running twelve fetches and six or seven battle lands. If Shadows over Innistrad contains the enemy fetches (Scalding Tarn and the like) then I’m probably going to be super wrong and that’s going to be a mea culpa moment.

But let’s get to my current wants:

This is the easiest call of all. Supply is at maximum, and everyone has all they need for their decks. The dirty little secret of the battle lands and the manabases right now is that you don’t need the full playset of each land. You need one or two, since fetches get you exactly what you need.

When there is no Windswept Heath, decks are going to need to draw their lands. Even if you want to run more pain lands (for the colorless) then you still have holes to fill and that means you’re going to increase the numbers of battle lands you’re playing.

Take a Jeskai Black deck or an Abzan Blue deck. Depending on the flavor, it’s running between five and eight battle lands of three or four types. No four-of on these duals, because fetches obviate that need. Take away the fetches and I think deckbuilders go back to three-of and four-of, which means the prices on these will conservatively double.

That’s right — I think even Cinder Glade will be in the $6-$8 range before we get the second set of Shadows Over Innistrad block.

It’s true that this is being overshadowed by Kozilek’s Return, and for the most part that’s merited. This is a sorcery, and colorless mana doesn’t help with converge at all. I think that Radiant Flames is super cheap for what it does, though, and it doesn’t seem unlikely for there to be a rise in decks that want to wipe the board of small things for three mana. Plus, the price to get in is so low that your risk is super low as well.

Stay away from the promo, though. Pick up one if you have to have the full collection of promo foils but this one doesn’t have much appeal to Cube or Commander. I can’t wait to trade these away at $3.

Speaking of cheap sweepers! This is a total flier. It’s almost bulk in price and while it’s five mana, there aren’t many cards ever that offer the same level of “kill everything but the one thing I want to live” around. Martial Coup did it, Phyrexian Rebirth did it. I’m picking up about ten of these and crossing my fingers.

There’s a little more risk on the buy-in here but the card already has pedigree. It’s too much life to be played as a four-of, and that is going to count against it.

However, this card is starting to pop up in Modern lists and that makes it an appealing target indeed. I really like trading for cards that have a wide appeal, even they aren’t used in full playsets. I think that this will climb to about $5, if not higher.

Holy Hero’s Downfall! It’s the same spell! A little worse, but a little better. What sent Downfall high was the rise of Mono-Black Devotion, but there’s a lot of reasons to go heavy black at rotation. The mana will be easier, and you’ll get this plus Grasp of Darkness. If you’re looking to kill creatures early and late, that seems like an awesome starting point. Path, Grasp, a couple of Flaying Tendrils…yeah, I like that plan.

This is another card that won’t have to try very hard to get up to $5, or even more, depending on the decks being built.

So if killing things is good, let’s stay on that path. This is a very powerful planeswalker who is seeing very little play. He’s amazing when ahead and great when behind, and I’m in for this climbing to at least $10.

In other decks, it’s pretty lame. But most importantly, it’s cheap and it won’t take much for this to be $3 in trade. This is one of my PucaTrade positions, getting them at 100 points and hoping to send them back out for 250-300 points in a few months.

If Shrine gets good, so does this. Shrine is actually best friends here, as the loss of a land needs to be made up. The same principles apply.

This isn’t a flier for three months from now. This is pure, unfettered, delicious speculation. Awakening Zone is up to $6 or so, though its last printing was five years ago. This is a better card, even for costing a mana more. I love picking these up and just putting them away, and the foils are sweet at $3-$4 too. Free tokens every turn are great, and using them to cast big things is amazing.

I don’t intend this to be a comprehensive list, just the things that have caught my eye. Are there others I’ve missed out on? Comment away!

8 thoughts on “The Bottom of BFZ”