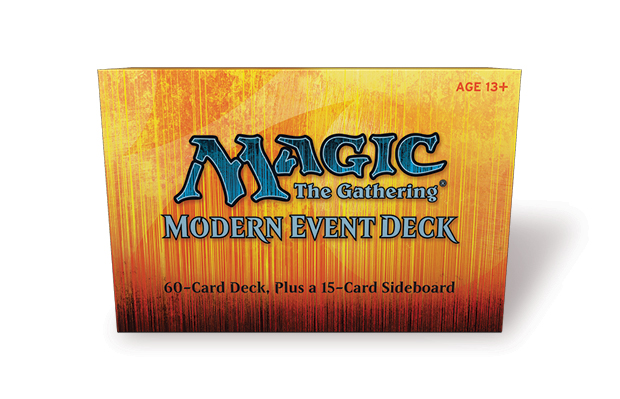 Once the full spoiler of Oath of the Gatewatch was revealed, one noteworthy omission was immediately spotted: Inquisition of Kozilek. The card seemingly could have fit in perfectly with the set, storyline not withstanding. Yet Wizards of the Coast didn’t seem interested (or hadn’t planned) in keeping the Modern staple at its once-affordable price. As a result, we have yet another $20 Uncommon on our hands. 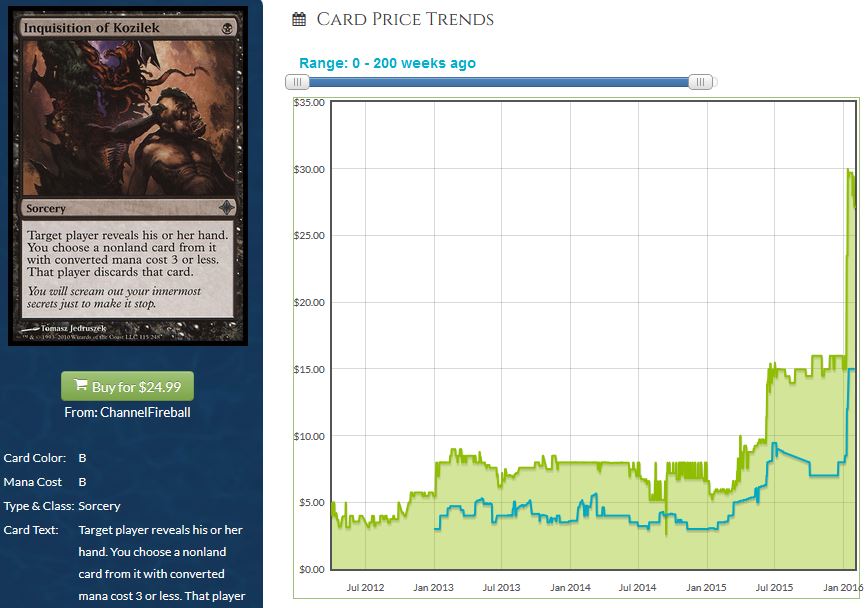 I guess if you don’t want to shell out $25 to play Inquisition, you could always play the more “budget-friendly” discard spell Thoughtseize. Five years ago, who would have ever expected trend reversal?

In reaction to the spike, I rushed out and did my usual thorough search of the internet for copies at the “old price”. I found a mild degree of success – eight copies on Card Shark at roughly $12 each after shipping costs were factored in. One seller shipped, the other cancelled – I still managed to net a decent profit from the endeavor. Besides these two play sets, I did make one other reactionary purchase…

When I announced the purchase on Twitter (@sigfig8), my purchase decision was met with mixed reviews. Some denounced the buy, suggesting there was no room to profit from the Modern Event Deck. Others applauded the choice and even followed suit, arguing there was no cheaper way of obtaining the cards within the set. Naturally my primary goal was profit, but if the best I could do was buy all the singles in the Event Deck at a significantly discounted price, I wouldn’t be too unhappy.

A few weeks later, I should be able to look at price trends and identify whether or not I made the right decision. However, I’d argue the data is still a bit unclear even now. I want to take a deep dive here, because this premise pops up over and over again – a card jumps in price and normal copies are bought out first before people consider possible preconstructed deck targets.

First, let’s take a look at the current price on the Modern Event Deck. 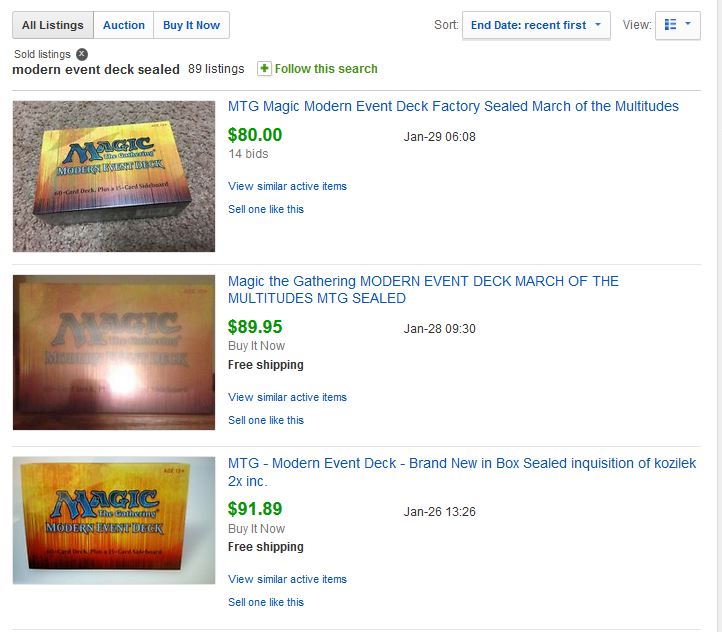 Factoring in shipping, Modern Event Decks have been averaging a completed price of $91. This is a 20% increase versus what I paid for my sealed deck – a solid profit, right? Well, not really. By now I’m sure everyone is familiar with the profit erosion that takes place when selling sealed product on eBay. Take 10% off the top for eBay fees, 3% for PayPal’s cut, and another $8 or so for our United States Postal Service and you’re left with a net of around $71. Bye bye profits!

Next, I’ll take a look at buy list prices to see what sort of value can be driven from quickly selling the singles within this box, hassle free. 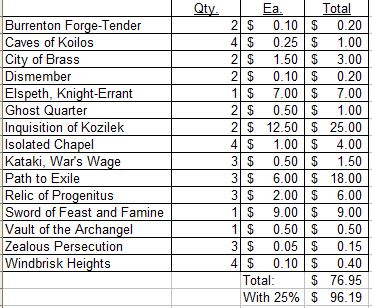 Using Star City Games’ buy prices, one could immediately ship key cards from the Modern Event Deck and net about $77. After bubble mailer and $2.60 for shipping, that’s a net of around $74 – with an entry price of $76, this represents a virtual break-even. I suppose if I wanted store credit, I could net myself about 20% in gains, but I would be left with a hundred bucks in store credit for my $76 cash purchase. This wouldn’t be the worst return, but I would be hard-pressed to convert that credit into pure cash gains.

The verdict: strictly from a profitability viewpoint, buying the Modern Event Deck has not paid off. Despite how the numbers fall, however, I’d argue there’s still a positive spin to this analysis.

Consider one’s decision to purchase the above singles now, on TCG Player. The total cost of buying LP or better copies of all the cards above is around $125. This price doesn’t even include all the cards you couldn’t buy list to Star City Games, nor the handy box and spindown die. Therefore, even at its current eBay price of $91, the Modern Event Deck still offers tremendous value over buying individual singles. This comparison makes an entry price in the $70’s extremely attractive, even though there’s no easy way to immediately profit off the delta.

With all this data in hand, I’ve come to the conclusion that buying the Modern Event Deck in the $70’s was a good decision. Even though there’s no immediate out for profit, there are two factors that tip the balance in the positive direction for me. First, if someone really wanted to, they could list all of the individual singles listed above on TCG Player and net a decent profit. Taking 15% off the top line to factor in fees and shipping still nets over $100. Granted, you may have a difficult time selling some of the smaller cards I listed. But even selling just the City of Brass, Elspeth, Inquisition of Kozilek, Isolated Chapel, Path to Exile, Relic of Progenitus, and Sword of Feast and Famine out of the deck would be enough to profit. Plus you’d have a bunch of smaller trade fodder left over.

Secondly and more importantly, the collection of cards one immediately acquires via the Modern Event deck offers up significant upside for the long term. Ghost Quarter and Relic of Progenitus will continue to be mainstays in Modern. Path to Exile is the premier removal spell of the format. Sword of Feast and Famine and Elspeth offer up terrific casual upside. The B/W lands have been gradually rising lately, and City of Brass will always be above bulk no matter how many times it gets reprinted. And last but not least, those two Inquisition of Kozileks carry more upside as long as they continue to dodge reprint.

The fact that the Modern Event Deck is a self-contained diversified investment in Modern should not be overlooked. This is perhaps the most attractive aspect of the deck itself. Besides, a few Godless Shrines and a couple other cards and you’ve got yourself a Tier 2 Modern deck to play in local events.

The Modern Event Deck is the most recent occurrence, but other card spikes have led to interesting discussion around preconstructed decks. When Birthing Pod became expensive, the Spiraling Doom Event Deck was an interesting target. The Dark Ascension Event Deck contained two copies of the once-$20 artifact, though it offered little else of value. The Jace vs. Vraska Duel Deck boasts a copy of Remand alongside some casual favorites in the form of two Planeswalkers, Night’s Whisper, and Future Sight. As Remand rebounds in price, this could become an interesting pick-up eventually. The Gleeful Flames Event Deck is also worth keeping an eye on, as it contains two copies of Modern staple Inkmoth Nexus. Unfortunately other than three Torpor Orb and a single Dismember, there’s not much else of interest in the list.

The New Phyrexia Event Deck Rot from Within is marginally more interesting, containing an Inkmoth Nexus, four Mutagenic Growth, a Green Sun’s Zenith, a Melira, and two Vines of Vastwood. Buying this deck gives you a fraction of the Modern Infect list, so you get some narrow exposure to a singular Modern strategy. 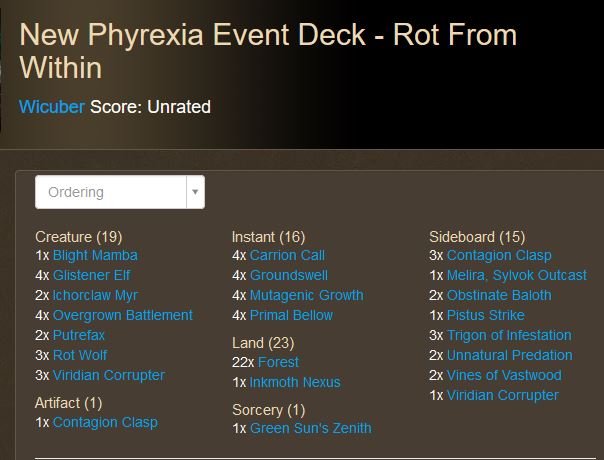 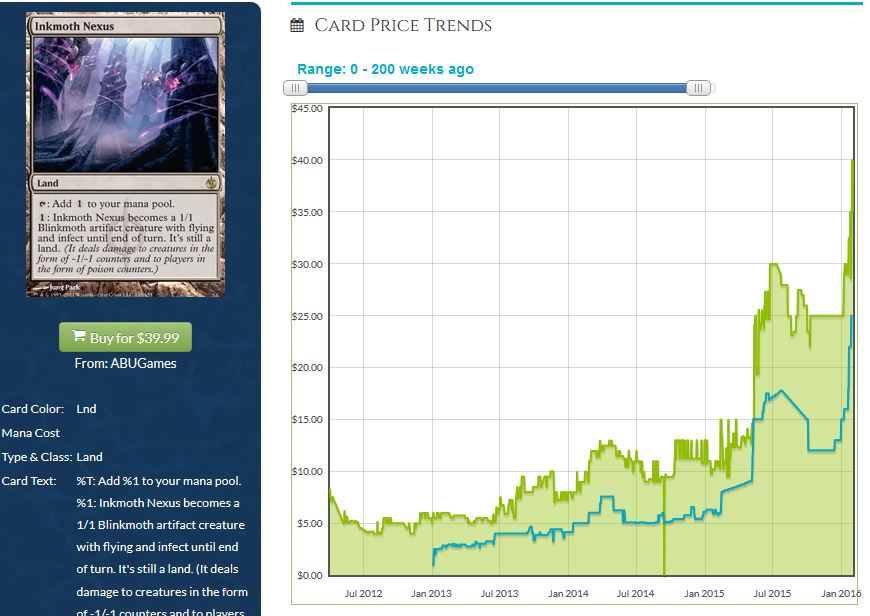 Plenty of other examples exist, but the overall premise remains the same. Sometimes a card will spike in price even though it’s in an older preconstructed deck. That respective preconstructed deck could have the potential to roar higher in price as a result. However, applying some of the rationale I present above, I believe one should remain highly cautious before committing funds to such a purchase. A quick glance at the above lists, and it is apparent there’s little else in those products besides the lone most valuable component. Therefore, you don’t get the added benefit of additional upside in nearly the same way as the Modern Event Deck.

Honestly, I wouldn’t consider any of these other options as worthwhile buys even in the face of a price spike.  These products are deriving their elevated value from a single card within, and there’s little other upside.  If Inkmoth jumps to $70, then of course buying an Event Deck with a single copy for under $70 is a no-brainer.  Just don’t get caught paying a premium for other bulk you’ll never gain upside from.

A few newer preconstructed deck lists offer up some attractive buys. My favorite option is the Magic Origins Clash Pack. 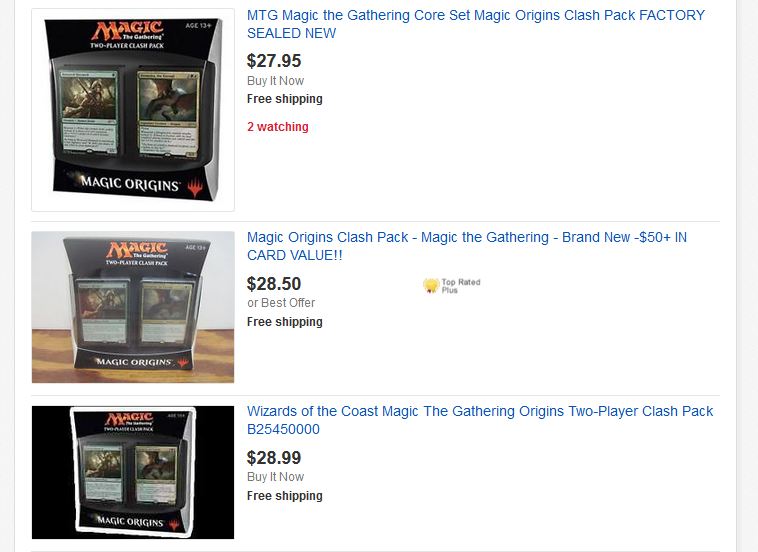 The product, which sells for under $30 shipped, contains a number of valuable cards with plenty of long-term upside from Modern play. This includes a Windswept Heath, a Collected Company, a Siege Rhino, an Anafenza, and possibly a Dromoka’s Command. This is definitely a product you’ll want to keep in the back of your mind should we see a price jump in fetches or Collected Company any time in the future. As we’ve witnessed with Inquisition of Kozilek, players will be very swift in buying up copies of the card. But they often are slower to drive up prices on preconstructed products where the individual singles may be lingering.

If you’re interested in pursuing this strategy, please learn from the data I presented earlier. Just because a card in an Event Deck jumps doesn’t mean there’s ample profits to be made on that Event Deck. In reality, I can’t sell my Modern Event Deck for profit yet. In the same way, a double-up of Collected Company will not mean Origins Clash Packs will become immediately profitable. They may be a great way to acquire copies of Collected Company for use, because you’ll get some other good cards for “free” in the bargain. Just don’t expect to make significant bank with the endeavor. If you approach such investments as ways to obtain copies of diverse long-term cards, however, then you’ll be quite pleased with the results.