So has anyone found any sweet deals on damaged cards by messaging the seller first and asking for pictures? If you have no idea what I’m talking about, you can get caught up by reading last week’s article on played cards, specifically damaged/heavily played stuff. If you missed that article, this entire sentence is willing to take you there for free! Thankfully, I was able to have at least one person give me a shoutout on Twitter saying that everything worked out great. 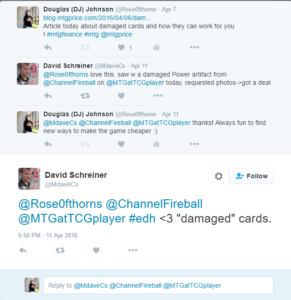 Fortunately, CFB is a reputable dealer and managed to get David some pictures of the card in a reasonable time frame so he could decide whether or not he wanted to buy the card. I’ve been trying to find a cheap foil copy of Seedborn Muse for a while now, and I narrowed down to a store on TCGplayer that had a damaged one listed. A few quick Facebook messages later, and we had this to look forward to. 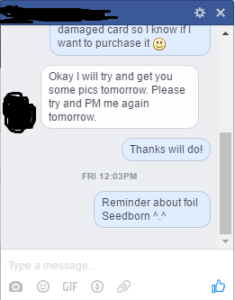 Unfortunately, this store hasn’t been as fruitful as I had hoped. I’ve messaged them again since writing this article, but I’m not super hopeful about getting another reply back. I’m also not too concerned about the price of foil Seedborn Muse jumping astronomically in the next few weeks, so I’ll be content to let this one sit for a while until I find another copy that I know I’ll be satisfied with.

Good Omens (or some other bad card pun subtitle)

On the other hand, Prismatic Omen is much higher on my foil bounty list for the angry mana baby. The suppy on eBay and TCGplayer has been dwindling steadily over the past few weeks, and it looks like most people were too busy worrying about the next big Standard tech to notice that Scapeshift won the Modern open last week while running four Prismatic Omen. I was waiting on a reply from this other store for almost a week, but I decided to bite the bullet and gamble again for $12 on a damaged foil. Hopefully it comes out similar in appearance to my Petrified Field, but that’s a risk I’m willing to take this time.

While we’re on the topic of me buying foils for my Child of Alara deck (and showing you some of the cheaper ways to do so), let’s talk about Star City for a second. While they often get a reputation of having the higher priced singles available online ($20 for a Collected Company? No thanks.), their sales are usually worth looking into. A few months ago I barely missed out on the opportunity to buy 43 SP Boundless Realms at $1 each, and I now make it a point to check out every time they update their sales. Last week, the hot topic item of the week was MP foils.

While I’ve touched on SCG’s grading system in this column before, I’ll reiterate that they have some of the harshest grading I’ve ever seen when purchasing cards. I’ve bought a ton of SP cards mixed in with NM, and half of the SP looked identical to the near mint ones. I’ve bought cards from SCG at moderately played, and successfully sold them on TCGplayer as slightly played. With this in mind, I decided to do a little research and make a few more foil upgrades for myself. 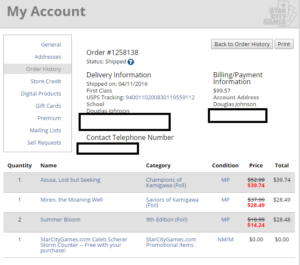 While I highly doubt I’ll be able to move that second foil Summer Bloom at any reasonable pace, it was just too good to pass up on. The next cheapest MP foil on TCGplayer is $26 right now, and 9th edition foils are rare enough as it is. I’m confident that I’ll eventually find a home for it at double what I paid, even if it takes me a while. As with the Omen, I’ll provide updates of these cards on Twitter and in my next week’s article so you can judge for yourselves whether or not you think they’re MP or SP. 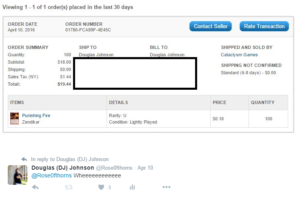 So I was originally going to write most of this article on Punishing Fire, until I realized that I wanted to delve deeper into the whole damaged/condition thing. If you’re a frequent visitor to my little neck of the #mtgfinance woods, then you know that I almost never buy cards at retail for the purposes of playing with them. The above paragraphs are an attempt to explain my thought process and procedure when I do buy cards to play with, as a way to get the best prices available.

Anyway, let’s talk about why I spent $19 whole dollars on a stack of 100 Punishing Fire. In my personal opinion, Punishing Fire is one of the most fair cards on the Modern Banned list today. I have no intent to rekindle the inevitable political debate that is “Make Jace Great Again” or anything like that, but Punishing Fire certainly seems pretty low on the list compared to all of the turn two and three combo decks that are currently sitting behind bars. If (and that’s a bit if) Punishing Fire gets unbanned, what happens?

While I doubt it shoots up to the $10 that Thopter Foundry managed to climb to, I could be completely wrong. It has a comparable number of printings (Commander 13 was printed significantly more than the original Commander set, but Fire also got a Duel Deck), and they’re both played as multiples in their respective decks. If Wizards is trying to slow down the format, Punishing Fire does exactly that, with an extremely low buy in. Hell, it even does a decent job of countering the Thopter-Sword combo by itself. I got lucky by finding a store that had 140 copies listed on TCGplayer to make my life easy, but this is still a card that you want to own in your Modern gauntlet just in case Wotc decides to turn the other cheek.

5 thoughts on “A (Pun)ishing Article Title”