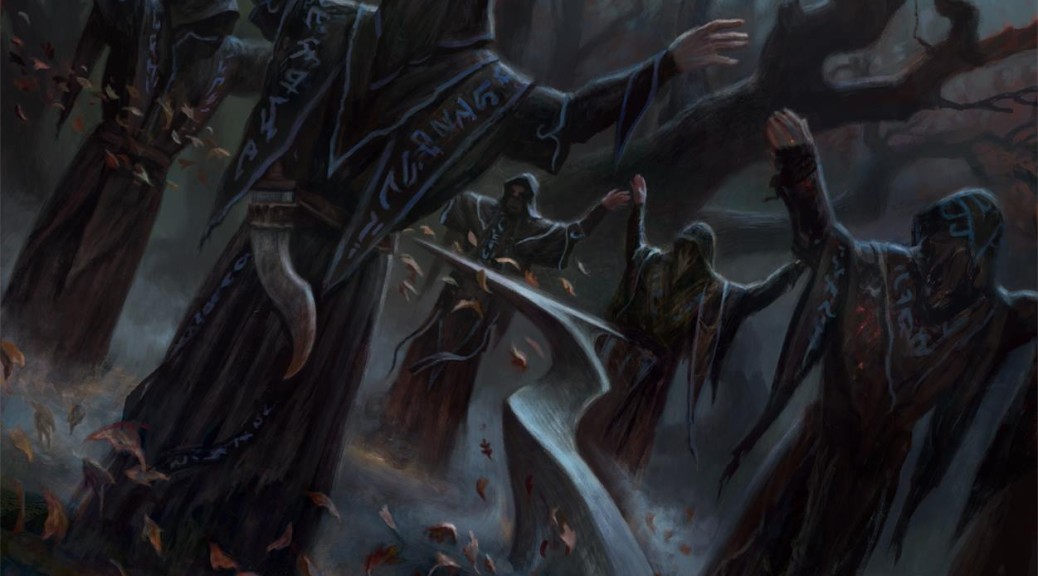 I saw a price update on Twitter that got me thinking.

I thought it was a good point. Not only is the growth on Burgeoning stupid good, it was stupid predictable. Even if The Gitrog Monster hadn’t come out and put a new focus on land shenanigans (Burgeoning works just as well against Gitrog and Mina and Denn decks as it does in them – probably better) it was already trending up likely due to how good it is and the fact that people think it’s on the Reserved List (it actually isn’t). Burgeoning is just looking good and that’s all there is to it. 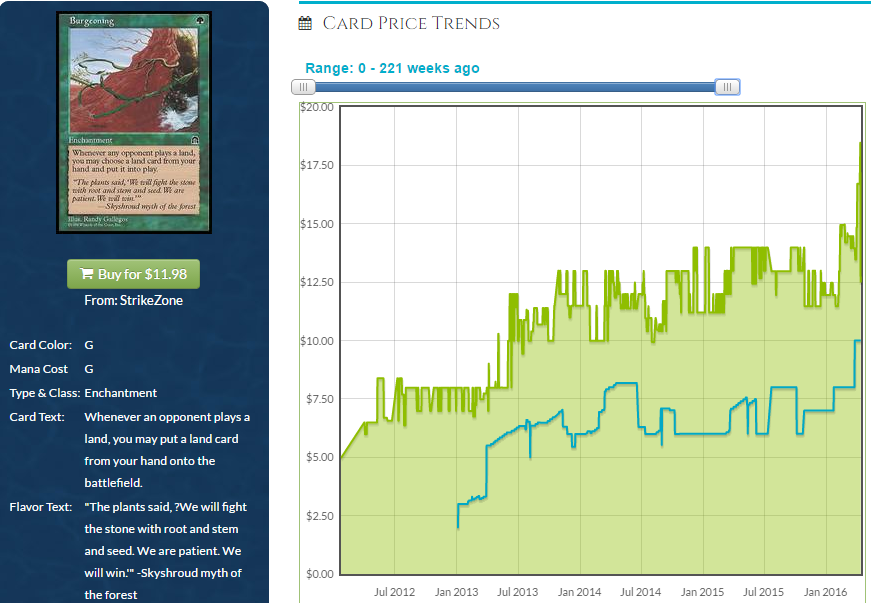 This is what we want to see. Buylist price is growing right along with retail price, there aren’t really sharp spikes that can’t be explained by restocking of inventories, the growth is over a long time period and seems to be predicated on supply and demand. This is the picture of real, sustainable growth. Best of all, there is no real reprint pressure because so many more cards are higher priority, although I don’t expect Burgeoning to hang out at $12 for long. This is headed to $15 and beyond, babies.

There are some cards that go up because of events – those are the boats lifted by the rising water levels I’m always talking about. Sage of Hours is a perfect example of this. 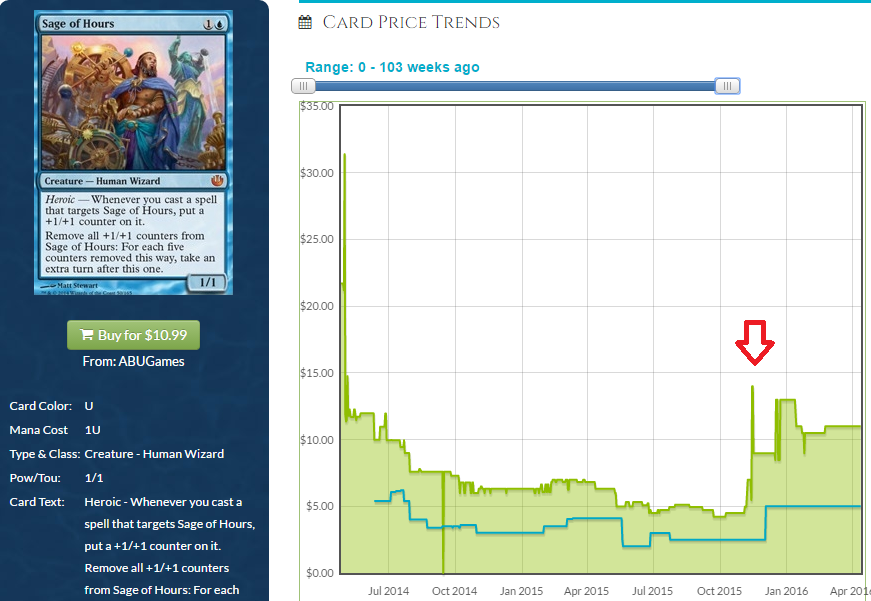 Whatever happened at that red arrow? Ezuri? Ezuri. How stupid a card that puts a ton of +1/+1 counters on a creature paired with a creature that removes those same counters to take extra turns can be got people moving and the non-foil price spiked as well as the foil price. The return to a price somewhere between the pre- and post-spike prices shows this was influenced by outside factors besides mere demand at the time. The buying was predicated on the promise of increased future demand, demand that puts the price at double what it used to be. Not too shabby. Ezuri ended up being built a lot less than decks like Meren but this is still a win for us. I’m saying us because I said “Hey, buy Sage of Hours” in an article and none of you wrote a comment to say “This card isn’t going to go up in price, you idiot” or “I remember that article you wrote calling us neckbeards and I still want you to know I hate you” or “I’m the real Jason Alt and this impostor is tricking you with terrible ideas in this article series and also can you call the police because the impostor Jason has locked me in a basement with my phone and I can get onto the comments section of MTG Price articles but I can’t make outgoing phone calls to let the police know I’m locked up although maybe cancel that because this basement has a PS4 which I don’t have at home and it also doesn’t have a crying infant so I’m just going to chill here for a bit” although that last one sounds like something the real Jason Alt would say. In any case, no one disagreed with me so that means I’m giving you all credit for calling it. Hooray. We won. This was a good call because we saw the increased demand coming and had a nice big window to buy our copies. You want to hear why I think that is? It’s hilarious to me.

Brief Aside, Where I Pontificate

OK, we’re veering off topic but I just picked this thread and I don’t want to lose it.

OK, so spoiler season for Commander 2015 started in September of 2015, in November we called the Sage price increase and that is  a long time in between because the price didn’t start to increase until 10 days after my article was published, giving readers a seriously big window. You had an even bigger window if you thought about it as soon as Ezuri was spoiled. I don’t remember when, exactly, but we found out what Ezuri did in late October or early November. Why wasn’t it until mid-Novemeber that Sage of Hours’ price started to move? I have a theory and you’re going to love this.

EDH players didn’t buy the cards they needed for their Ezuri decks until they bought the Ezuri precon and cracked it open.

Seriously, think about it. Why else wouldn’t the prices move until after the decks were released (November 13th) if players knew they’d want Sage weeks earlier? Can you imagine having two weeks to prepare financially for something you know is coming? Well, once a year Commander sealed product is going to give us a gift and EDH players, bless their (our?) hearts, are going to wait until they have their precons before they start acquiring their singles, hopefully from my readers on TCG Player and Pucatrade.

End Aside. I Hope You Liked It.

Again, that’s a hypothesis of mine, but data seems to mostly bear it out. If someone wants to disprove it with a bunch of graph data, feel free, but the EDH mindset informed that hypothesis as much as the pricing data did. I’m thankful we get such long periods of time to wait for things to happen. 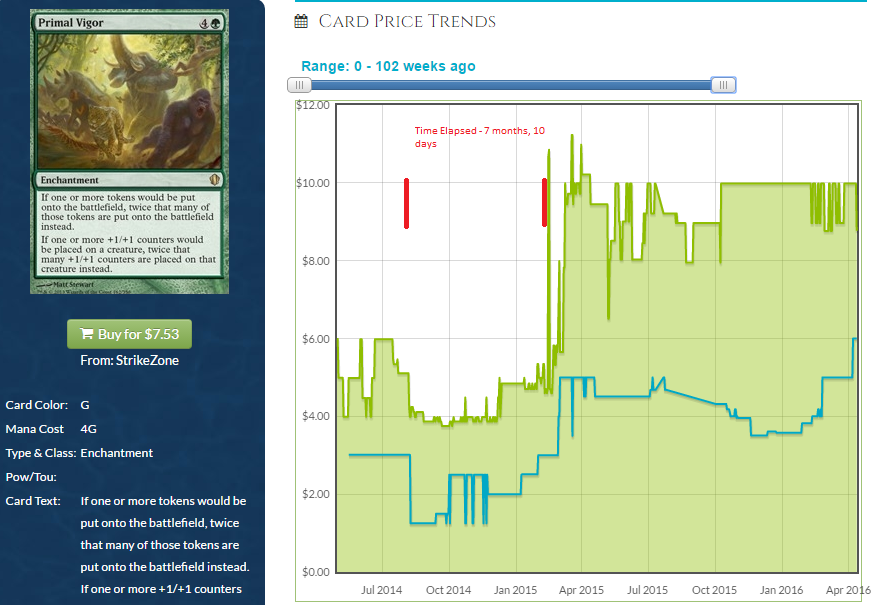 7 months is a really long time for something you are certain is going to happen to eventually happen. It’s actually enough time to doubt yourself, which I started to do. OK, not really, but that would have been reasonable. I don’t doubt my specs, I stare at the price graphs and yell “WHAT IS TAKING YOU SO LONG?!?!?!” because I believe in myself because I’m always right it’s just reality that is sometimes wrong.

7 months allows you to take your time and get your cards by trading rather than buying a bunch of copies on TCG Player, which can sometimes trigger the market if people notice supply is lowering or average price is increasing. Dealers can update their prices and then you’re stuck paying much closer to the spike price or competing with others for copies. We want other people to do their buying at the new price, not the old one. This is our spec, so let’s make some money.

Isn’t this the main appeal to speculating on EDH cards? Instead of being glued to coverage, waiting for something to spike and hoping you beat everyone else to the copies, the store doesn’t cancel your order and you can out the copies when you do get them before the price goes right back down, you can pick up stuff at a leisurely pace. You know how long I’ve been accumulating copies of Dictate of Erebos? Like 2 years. If you read this series, you have been, too because it’s so obvious a pick-up that there is literally no way not to make money, especially when copies were nearish bulk. 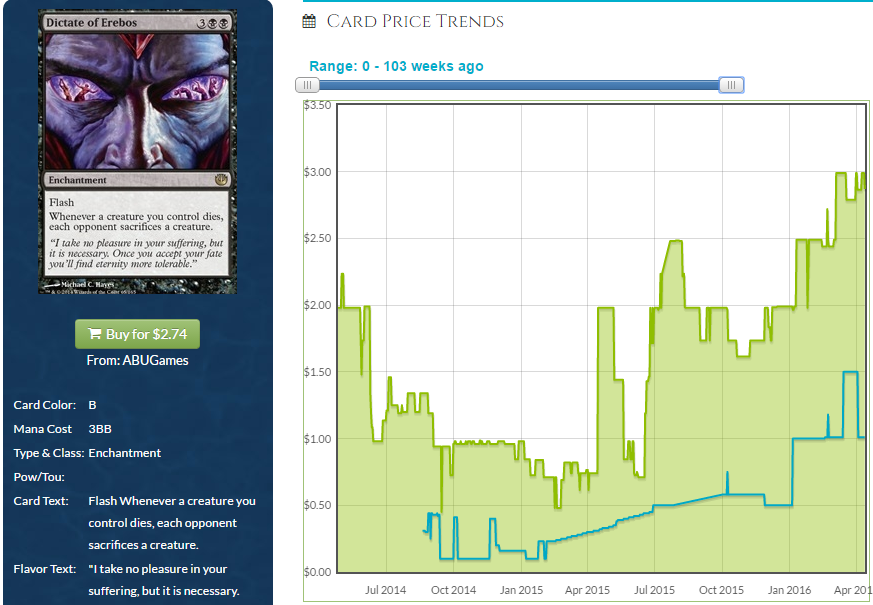 $0.50 into $3? Almost a year of being bottomed out in price? Sometimes it’s super easy, and you can take your time and snag copies via any method you want. Is something going to happen soon to make Dictate go down in price a ton? That’s pretty doubtful. What we have is a low risk, high reward spec with inevitability. You won’t get that as often with Modern and you will never get it with Standard.

Cutting out the risk of reprint makes some cards seem even better.

We looked at a lot of Reserved List cards that EDH could push up and a lot of them went up a few weeks later but all of them were predicated on the Eldrazi deck in Legacy more than they were EDH. Still, it was pretty easy to predict and hopefully my readers got any cards they needed before they went nuts. One card I did forget to include in that piece was Winding Canyons. 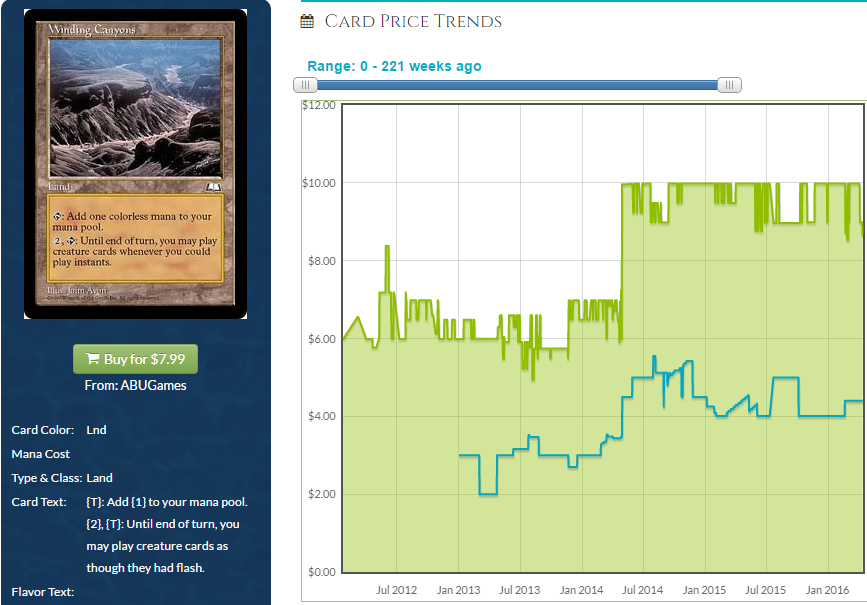 Still available under $8, this hasn’t moved a ton, but this could see a bump in the new land-aware meta as well as a post-Prophet of Kruphix meta which requires us to find new ways to cheat at Magic. People buying Seedborn Muse (a lot of people, because they thought a little bit but not a lot) forget that the part of Prophet of Kruphix that is cheating is the part that gives your creatures super haste by letting you play them on any turn. Any turn means more when there are 6 players than when there are 2. This is an example of a card that will go up. How could it not?

That means we’re not getting more copies. The number of copies we have is the number of copies we have. Weatherlight is on the tail end of the Reserved List, but it’s still old as hell meaning there aren’t a ton of copies. Current demand won’t hold as more players are added and we adapt to the new reality, current supply is all there is and this is a desirable effect, stapled to a land with no color identity.

Its Effect is Unique

While not unique in the game, this is the only colorless land that does it. People are perfectly willing to play Alchemists’ Refuge (And why not play the best color combination in EDH, really? ) but any deck can play Canyons and that’s another reason it gets a look.

Any time we have a growing player base fighting for finite copies, we have a recipe for growth.

How long will it take Canyons to go up? Hard to say. Why not buy in a ton? Well, there isn’t movement on the price now and we had to wait 7 months for Primal Vigor to go up and that was a sure thing. How long do you want $8 a copy tied up in Canyons? What I do recommend is trading for them, putting them in decks for the time being and selling them when you’re happy with where they’re at.

All of this set us up for what I want to discuss next week, which is a way to identify EDH specs based on their being budget alternatives to more expensive cards that are so good people stop using them as alternatives and just jam both copies. I’m excited about it, so get excited yourself. Until next week.