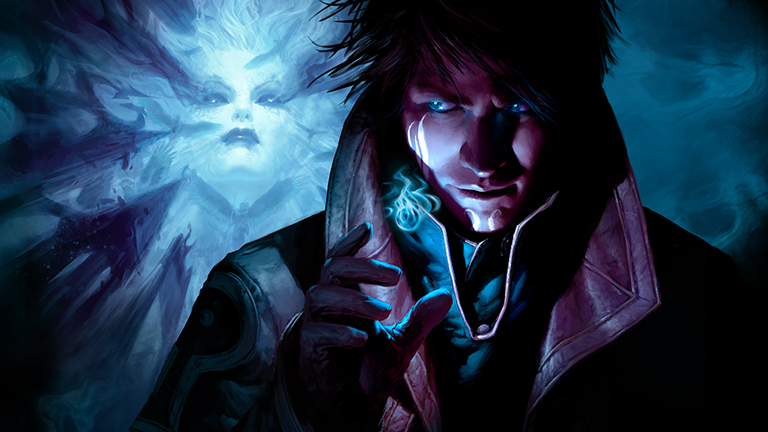 Check out our Pro Tour preview over here, and join us for round to round coverage in live blog style below all day.

Round 8: Brad Nelson, on G/R Goggles, is the only other undefeated player at 8-0. Pyromancer’s Goggles could easily climb if this deck makes Top 8, having demonstrated usefulness in multiple shells. Could end up over $15, supply is low.

In game 1, LSV only hits a Catacomb Sifter on his first Collected Company, but does manage to get a Nantuko Husk in play the turn after. Zullaport Cutthroat joins the team while Mackl fields a bevy of his value creatures to try and create the pressure necessary to keep Luis off of his combo. A mid-game Westvale Abbey activation gets the dangerous demon  With many portions of this deck under $1, Cryptolith Rite and Liliana, Heretical Healer may absorb the spike potential.

Game 2 finds a similar board state, with LSV’s deck outpacing the board presence of the Bant Company deck. With Mackl’s relative lack of removal, LSV is free to pursue his flood and sacrifice plans, and Mackl falls to the only 8-0 record of the day.

The players split the first two games. In Game 3 Majors has three copies of Always Watching on the table, making his army of white creatures fairly menacing to Calcano on 4 life, despite the presence of both Nissa and Jace in planeswalker mode and set of reasonable blockers. Calcano manages to stabalize, and as time is called he finds a Tragic Arrogance off the top to clear out the board, including two of the Always Watching copies. Calcano keeps a Lumbering Falls, a Sylvan Advocate and his Nissa, Sage Animist vs. a Thraben Inspector and a single Always Watching. Swinging in Calcano thinks he has it, but Avacyn off the top for Majors leads to a definitive block and Majors is able to take the game on the crack back! Majors goes to 7-1.

This deck is running four copies of Goblin Dark Dwellers to leverage the many removal spells, Read the Bones and Transgress the Mind.

LSV’s deck uses Cryptolith Rite to good effect, being able to tap his creatures for mana, and then sacrifice them to double up. Sexy. Both sides are also on Collected Company, which may well be the card of the tournament. LSV goes over the top on Turn 5 (!) with Ormendahl off of Westvale Abbey and Dezani packs it in for Game 1. In Game 2 LSV swarms the board again and is able to sac his board to Natuko Husk with two copies of Zulaport Cutthroat in play to take the match.

Justin Cohen (BG Aristocrats) vs. Katsuhiro Mori (Bant Company) is our second feature match this round.

Nelson takes Game 1 off camera. In Game 2 Nelson gets a Dragonlord Atarka on the table, cleans up the board and starts attacking. During the next combat, Nelson casts Fall of the Titans twice (!) off the Pyromancer’s Goggles, surged for a ton and takes the match, moving to 7-0.

Here we have our first appearance on camera of Nahiri, the Harbinger on camera, alongside Livala, the Preserver out of Samuel’s deck. As we come into the match, the players are tied 1-1. Linvala goes toe to toe with a mid-game Avacyn, the board goes clear, and Samuel follows through with a Chandra, Flamecaller and a Goblin Dark Dwellers to reverse the pressure. An awakened Ruinous Path kills Yamamoto’s remaining creature and Tharmaratnam goes to 6-1.

Brand new deck archetype on display using Crush of Tentacles, Demonic Pact and Dark Petition and a bunch of kill spells to control the board and grind out the opponent’s life. Also runs 4 copies of Oath of Jace. Dark Petition has already popped, but keep an eye on Demonic Pact.

Coming into the weekend Bant Company was definitely the deck to beat, with a list that applies pressure and grinds with the best of them. Yasooka is on Esper Dragons in an attempt to control the aggro decks, and dictate the pace of the mid to late game. Sylvan Advocate and Avacyn doing the expected level of work. Shota notables include Jace, Vryn’s Prodigy, Ob Nixilis Reignited, Dragonlord Ojutai and Languish.

In Game 1 a timely Dromoka’s Command puts Shota on the back foot, and he falls to the onslaught of violence from Den Protector and Sylvan Advocate.

In Game 2 Yasooka uses Dragonlord Silumgar to steal a buff Tireless Tracker and beats face in a tempo swing that sees Mackl fold his hand a couple of turns later. Game 3 shows off the power of both builds, with Mackl leveraging Reflector Mage, Avacyn, Nissa and Sylvan Advocate to keep Yasooka on the defensive. Nissa buffs the team, and makes Languish ineffectual from Yasooka. The game grinds on, but an incorrect flip trigger on Avacyn ends up leading to an overwhelming game state in favor of Mackl, who moves to 6-0.

LSV jumps out to an early start and takes Game 1 from one of the greats of the game. In Game 2, Finkel has trouble finding action and LSV goes to 6-0 to start the tournament. 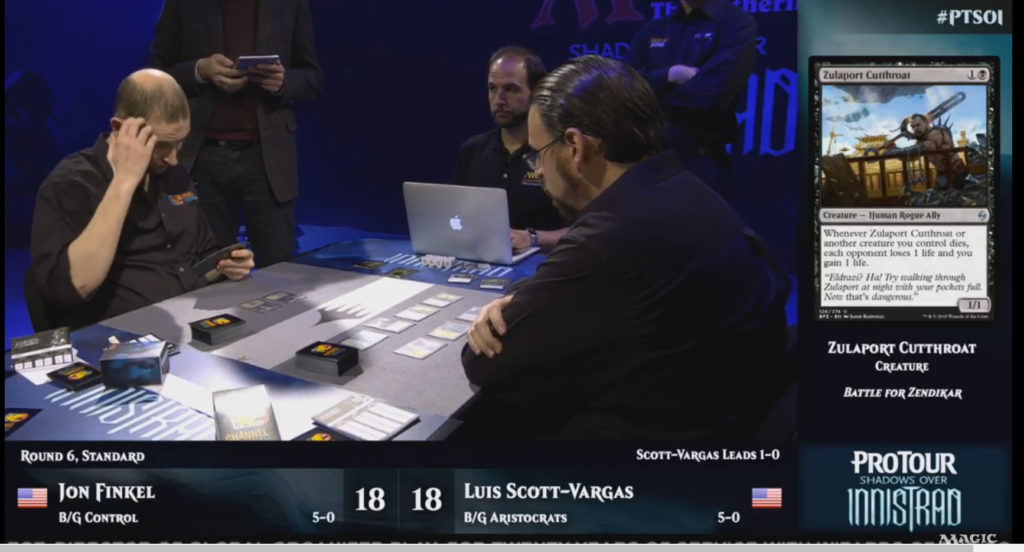 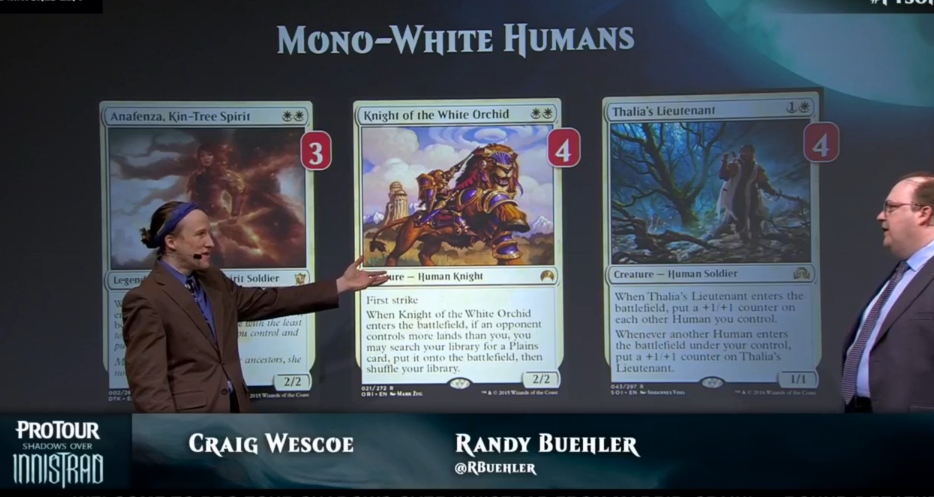 Wescoe breaks down the desire for multiple buff options in the deck, explaining the shift to three copies of Anafenza, King-Tree Spirit to complement the full four copies of Always Watching. Also running four copies of Declaration of Stone.

Dark Petition is also being bought out, having spiked over $8 from $1.50. Will be interesting to see if it can hold that level by generating top table results this weekend. As a potential Modern, Legacy and Vintage card, foils are still available under $10.

Johnny Magic takes game 1 on the back of Nissa’s Renewal, referring to the card as the current Sphinx’s Revelation,  a card that similarly drew cards and gained life a few years back. Mansfield’s deck includes Narset Transcendent and Sphinx of the Final Word. Various cards from the Finkel deck are already spiking on Magic Online, including Tireless Tracker, Dark Petition, The Gitrog Monster, Traverse the Ulvenwald and World Breaker. Look for similar moves in paper if the deck proves its value deeper in the tournament.

Team Eureka is on a GR ramp brew with Pyromancer’s Goggles.

Seasons Past is being bought out as Finkel takes Game 2 and the match.

Off camera Brad Nelson on GR Ramp closes out a game by doing over twenty damage with Fall of the Titans in the presence of a Pyromancer’s Goggles.