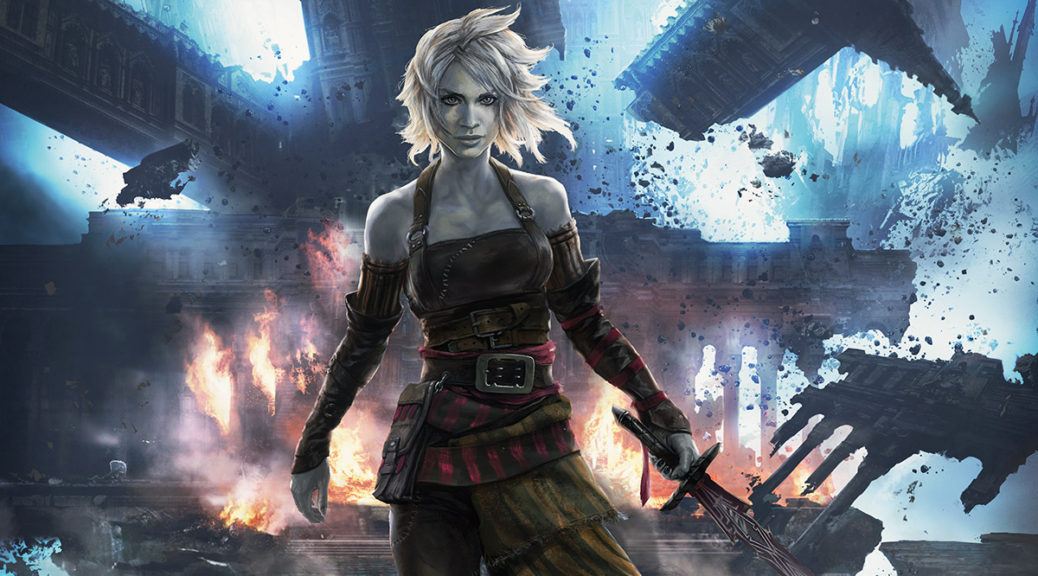 Ext. A swamp in an undisclosed location. A dragonfly lands on a leaf and a mutated lizard with two heads grabs it with its tongue and bites it in the midsection, licking one of its eyes with the other tongue.

Int. A dimly-lit lair, dominated by a long conference table with a podium in the center. At the podium stands Lex Luthor. I feel silly even having to have to describe Lex Luthor. He looks Lex Luthory. You know, one of the most famous comic book villains of all time because he’s the only one they put in Superman movies despite there being a ton of powerful Superman villains. General Zod was cool in Superman 2 but in 3, he fought… Richard Pryor? You’re going to tell me a man with heat vision struggled to take down a guy who once accidentally lit himself on fire? And don’t get me started on Superman fighting Duckie from Pretty in Pink plus that weird sun guy they cloned from Superman’s hair. Anyway, be quiet, he’s about to say something. 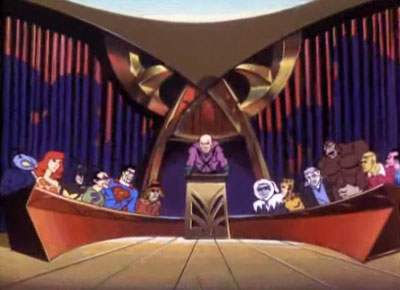 Lex Luthor – We need to formulate a plan for how to handle Commander 2016.

Sinestro- Our mana sucks right now. They need to reprint Chromatic Lantern! I should know, lanterns are kind of my thing.

Lex Luthor – In every deck? I don’t think so.

Black Manta – How else are we supposed to build a mana base that isn’t a million dollars?

Sinestro – I could make every color yellow so that every land adds yellow mana and you can cast all of your yellow spells!

Riddler – What has lame powers and won’t shut up about turning everything yellow?

Sinestro – WHO DARES?! Silence yourself, Nigma, or by Oa I will come over there and

Lex Luthor – Maybe he’s onto something.  Also, most of you are terrible villains. I wanted to invite just Captain Cold, Brainiac and Bizarro Superman and the rest of you just kind of showed up. Meeting adjourned. 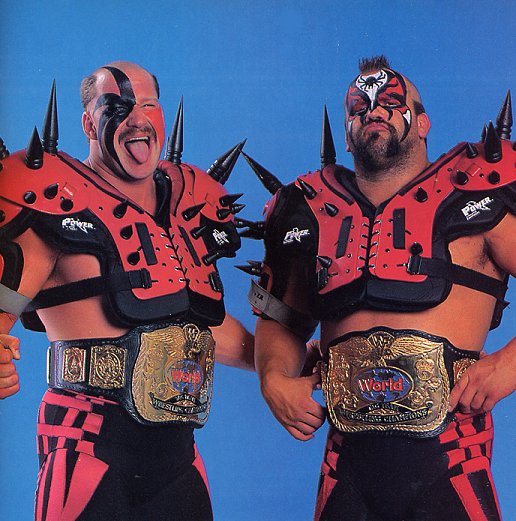 First wrestler guy – Are you sure we’re legally distinct enough not to get sued by DC comics or Hanna Barbera or something? I’m nervous about calling ourselves the Legion of Doom

Second wrestler guy – I’m just here because I think people should play Cream of the Crop in more decks.

First wrestler guy – Wait, that wasn’t even us. That was Macho Man Randy Savage

Second wrestler guy – Are you sure?

First wrestler guy – I’m positive. Besides, Cream of the Crop is only good in decks with huge creatures. Are there going to be any of those in a four-color deck?

You know what’s really likely to happen when people have to build a four-color deck? 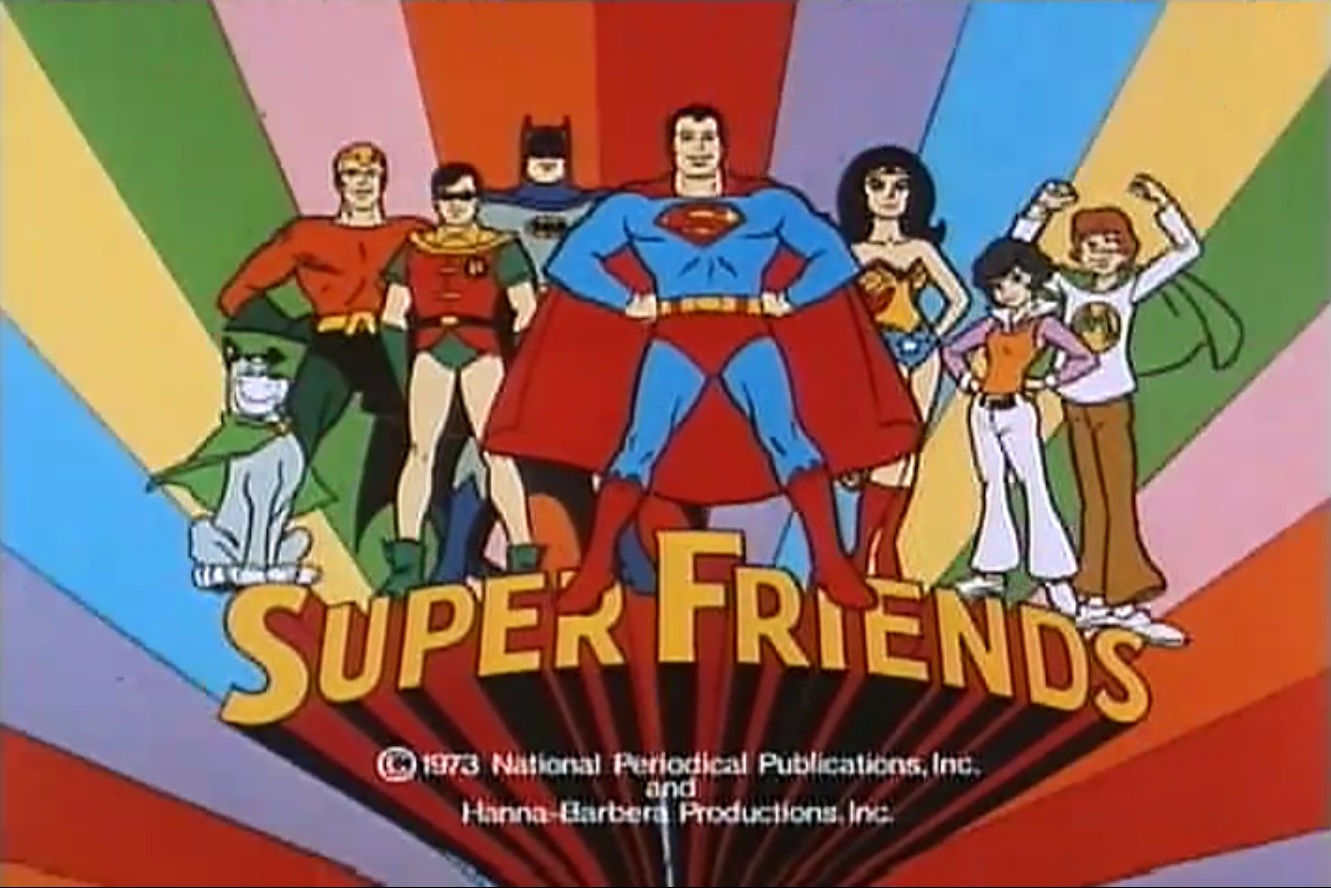 This junk. It may be time to take a second look at anything that matters in those decks before everyone starts building them. Five new decks with wonky mana bases, new mana fixing cards, strategic reprints and new spells is bound to lead to an uptick in the number of people saying “Screw it, let’s make a goodstuff pile” and for my money, you don’t get many better goodstuff piles than you do when you throw a pile of superfriends into said pile.

Superfriends have gotten a new cycle of helpers and some of them actually matter to superfriends decks and are decent in EDH. Some of them suck. 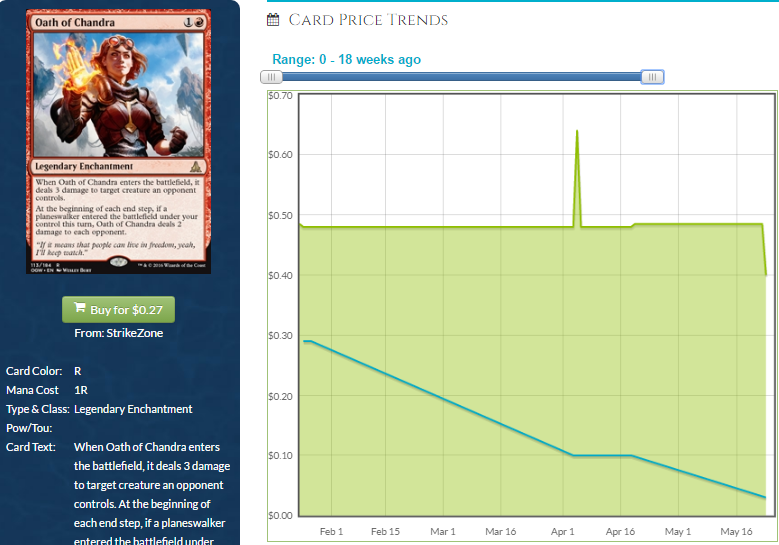 This is a pretty small effect for something that’s kind of tricky to trigger and dealing 3 to a creature is likely wasted a lot of the time (but very useful others) but I don’t know if this will get adopted enough to have upside. It’s at its bottom, though, so there’s nowhere to go but up. I see this getting jammed to complete the cycle more than anything. 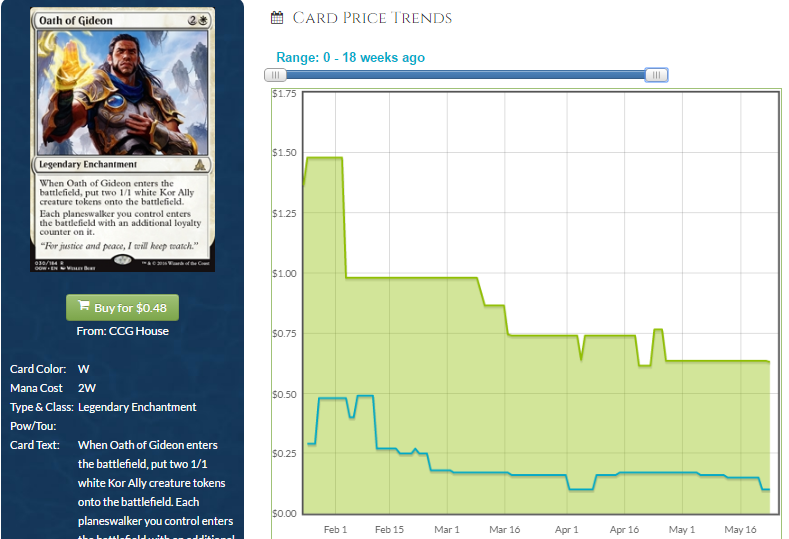 This has a very cool secondary ability and could be very solid for keeping your planeswalkers alive more often or sometimes triggering abilities sooner. If you have Doubling Season this is even better. This is also likely at its bottom, price-wise but the real play on this and Chandra’s Oath is to snag cheap foils in case EDH play increases the multiplier. There’s no time to buy foils that haven’t hit yet like when the non-foil is a bulk rare. 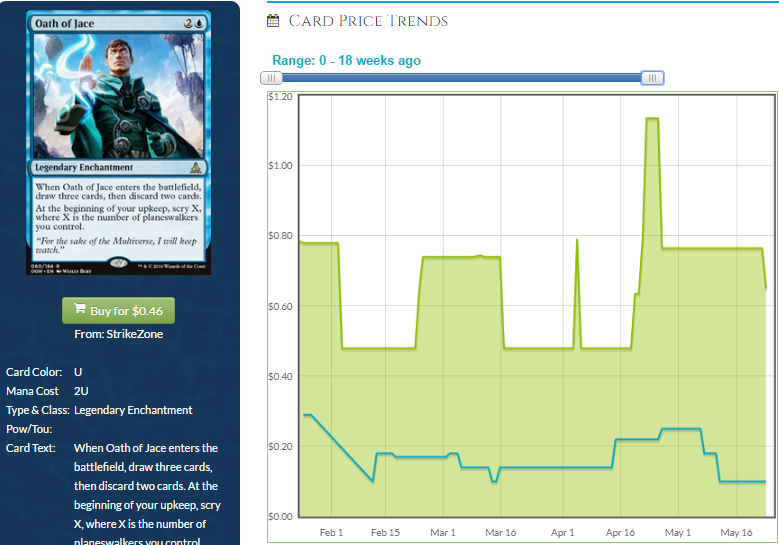 This is a card that isn’t bulk because people can’t decide if they’re OK paying 2U to do a weird Brainstorm thingy. The scry ability on the secondary is going to be great if you have 3 or 4 ‘walkers out and I think this probably is going to dip and will have to get adopted a bit to even hit where it is, now. All of them will have to climb a bit to hit $1. 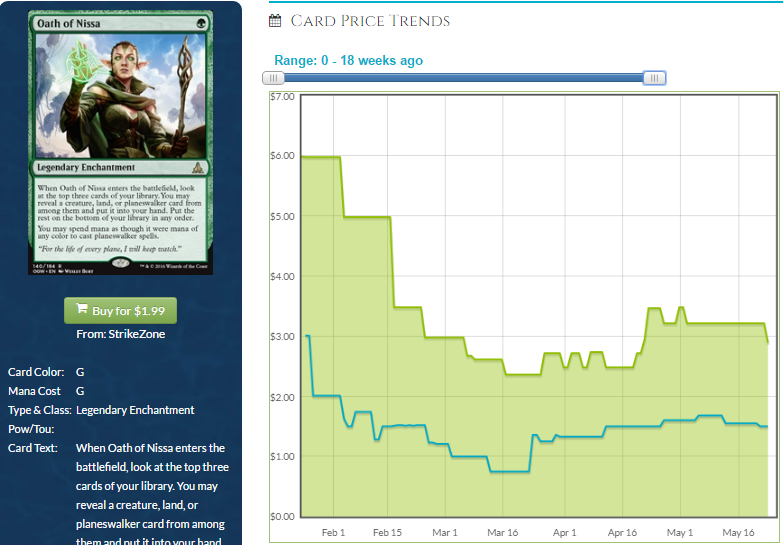 This one doesn’t really have as much upside unless it tanks soon, which I doubt. This is a green cantrip. The reason I’m so excited about this in Superfriends is that it’s a second Chromatic Lantern that draws you a card instead of tapping for a mana. The fixes your mana in a very profound way and replaces itself when you play it making it one of the least obtrusive inclusions in a planeswalker deck, ever. Are they going to waste a removal spell on this when you have Doubling Season and The Chain Veil in play? This is so much better than the other ones in a planeswalker deck that the only reason you’d play the others is to have the cycle going.  I say that with a healthy amount of respect for Oath of Jace. This is a card to watch – this could dip, maybe at rotation, but this is going to be a real card in Superfriends decks and doesn’t seem that likely to get reprinted. 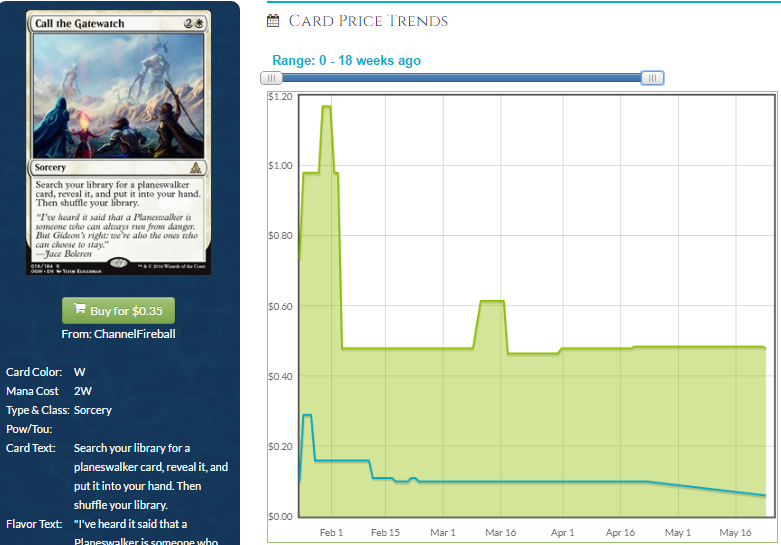 The plateau says everyone has forgotten about Dre. The price was only $1 initially because it was not going to have any impact on Standard and the players who wanted them got the 1 copy they needed, leaving a lot of unclaimed copies. The thing is, this card is going to go up over time. The farther we get from this card’s printing, the more cards are going to end up getting forgotten in boxers and binders. If this card spiked hard those copies would come out of the woodwork. We don’t want that. We want as many copies in the woodwork as possible because it makes it easier for our copies to go up in value. This tutors for a Planeswalker provided you’re playing white in your deck. Best of all, the foils are only $2.50. The foils are the play, I think. Still, both of these prices will go up over time and it’s never too early to pick these up in trade and throw them in a box. I feel like this is similar in obviousness to Dictate of Erebos, a card that was a bulk rare when it was in Standard. 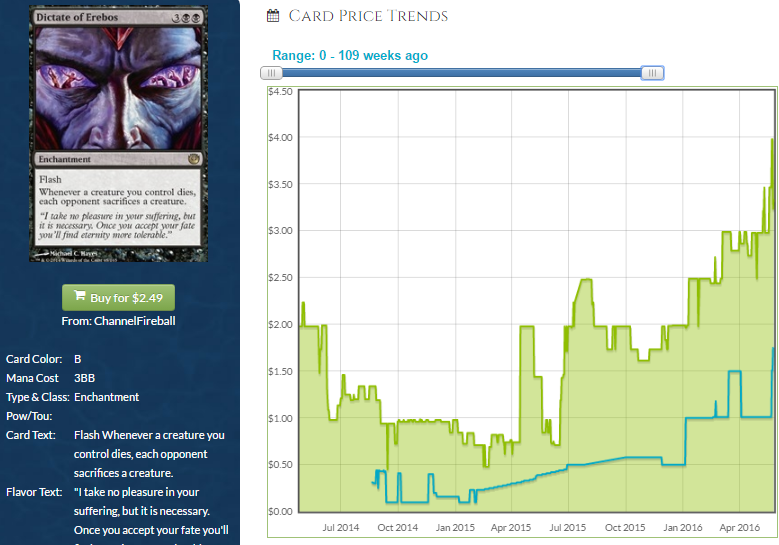 My hundreds of copies are making me very happy and I sold enough at $3 to pay off what I bought so the rest are pure profit. I feel like we’ll see a similar graph for Call the Gatewatch, albeit with a much more gradual slope, I think. Still, Dictate has a lot of other cards like Grave Pact (more expensive) and Butcher of Malakir (much less expensive) that do the exact same thing and Call the Gatewatch really doesn’t. I’m not in for cash on Call, yet, but I’m trading for them aggressively. Seems obvious.

I think it’s worth checking in to see how my call of “The Chain Veil” is going. 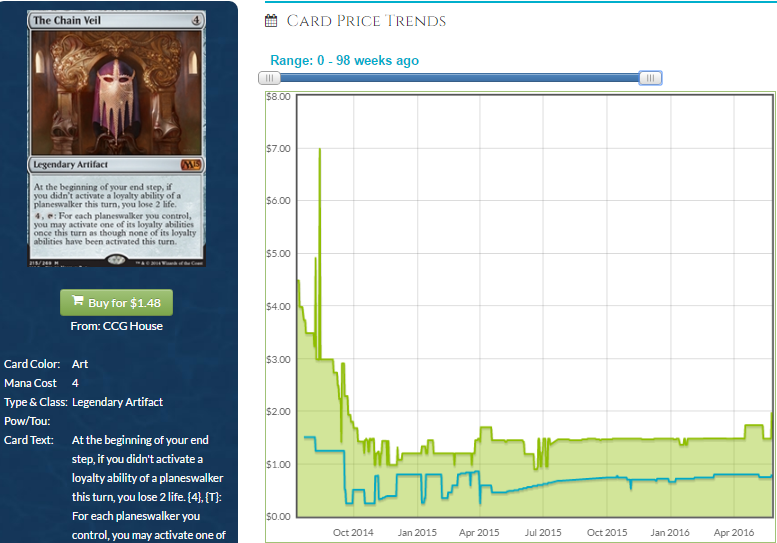 Hmm. The price hasn’t gone up much and online stock hasn’t gone down a ton. That’s not to say it won’t – I don’t think I’m saying anything controversial by saying EDH and casual both like effects like this. The farther we get from this set’s Standard legality, the more we’ll see this climb. It’s a mythic which means there aren’t as many copies of it as a card like, say, Sliver Hive. Sliver Hive is more likely to get bought as a playset, but I’m confident that The Chain Veil is going up. Are you also confident? Well, you have time to trade into these before anyone signals TCG Player by buying enough copies to trip anyone’s algorithms, so just target these as a throw-in when a trade is off by $1. Also, learn to make it your business to make trades off by $1. 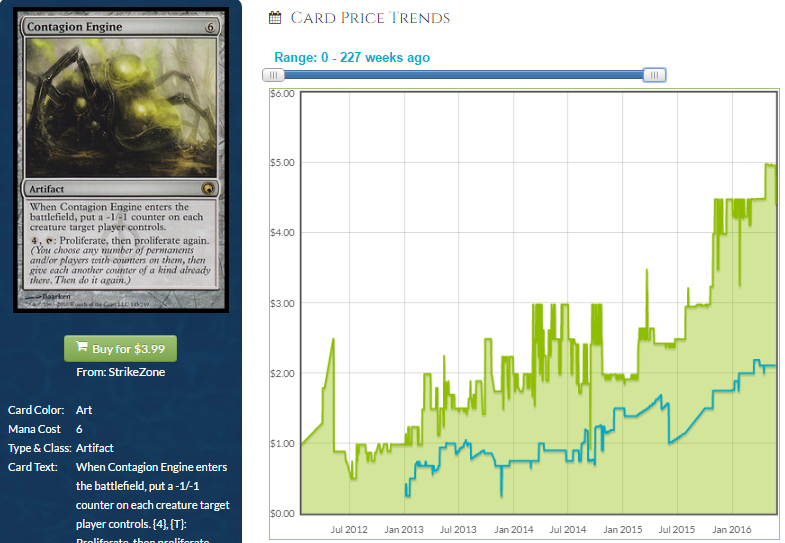 Everything people said about this card a year ago is still true today, except when they said this would be printed in Commander 2015 to facilitate Experience counters. That didn’t happen and the card has climbed even more since. At a certain point, this is going to be worth reprinting, but until then, pair this with Superfriends and don’t look back. This does everything you want a card to do. The price of this as it rises and the price of the $13 (down from $20+) foil are beginning to converge. This means there is still organic demand for the non-foil and that if the foil comes down, it will sail past the equilibration point. As the non-foil climbs, the higher it gets, the higher the foil multiplier will be, which means the foil price falling will hit a brief window where it’s lower than it should be and is good to be picked up. I don’t know mathematically what that number is but I know what I think those concepts should look like vaguely and shape-wise. I’ll sketch what the hell I’m talking about on a graph. 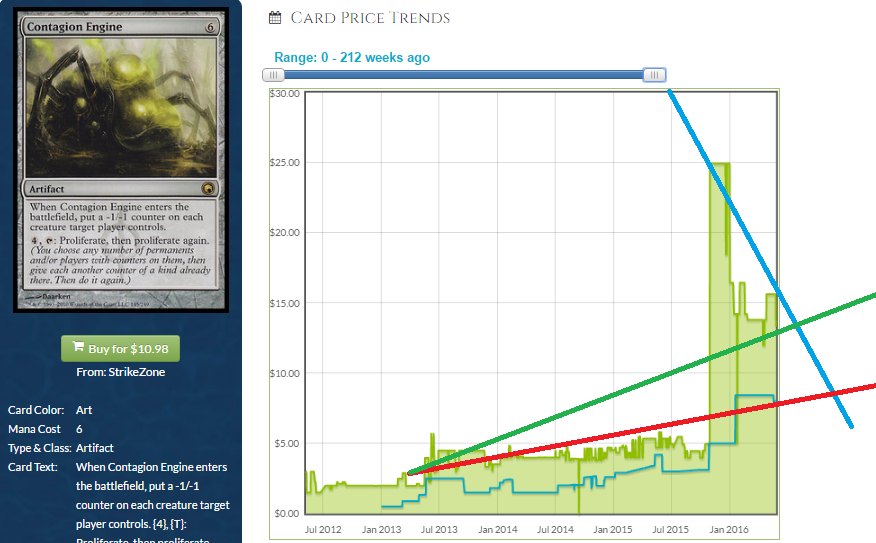 The red line is the vague slope of a non-foil that is climbing from organic demand. The blue line is the slope of a foil price that spiked too fast due to hype and is overcorrecting due to falling demand. The green line is vaguely what the foil multiplier should make the price based on organic demand for the non-foil. The better the card, the greater the demand for foil copies so the price should diverge. I think there is money to be made if the foil comes down too much more since the non-foil is still climbing. It’s still a good card. Wotc is still going to print creature tokens and hydras and planeswalkers. What isn’t clear is whether they’re going to reprint Contagion Engine. Commander 2015 was a very good time to do it. Will Commander 2016 be as good a time? We could see a reprinted planeswalker in every deck. We could see Dune-Brood Nephilim in the deck with no white in it. Then again, we could just see them not reprint it and then we’re another year from its standard legality and there will be more cards it interacts with. Hype made this card grow a lot, but that’s not to say merit wasn’t going to do so anyway. We even wrote about Contagion Engine in this series before we knew anything about Commander 2015 so everything we said then should still apply now, only now a lot of copies have been pulled out of the woodwork and are concentrated in the hands of dealers, which means one effect that would dampen the ascension of the card’s price a second time is already taken care of. 3

I think we can take a look at other ways to make our mana better in both Superfriends and also just generic 4-color decks (and 5 color, really – you could combine some of the C16 decks in a Progenitus shell or something) next week, so stay tuned. In the mean time, check out the Eternal Masters spoiler coverage and our discussion forums here on MTG Price. Hit me up in the comments. Until next time!

8 thoughts on “The Legion of Doom”