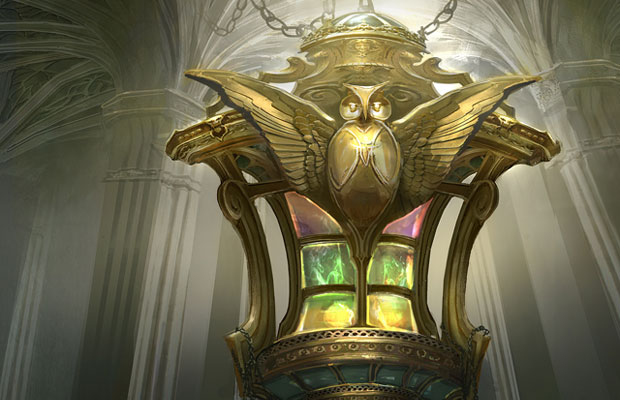 I spent a lot of time last week thinking about how we were going to build Superfriends decks in the future because our mana is going to be so crazy bonkers with the advent of a bunch of four-color decks that people will be able to be super greedy. While I think it’s true that Superfriends are about to get a bit of a bump, I think it’s also worth taking a lot at other ways players plan to play cards with their wacky new cards. I have a few different theses to cover so I’m going to launch right into it because I want to get all of my thoughts out before I hit my word cap. I mean, it’s a soft word cap. You’re not going to want to read a 4,000 word article, true, but I’m also going to hit like 2,300 words and think “I’m not getting paid any extra for this” and that’s going to sap my enthusiasm in a hurry. So, like I said, I’m not going to waste time – I am going to get right to it and cover what I want to cover. I think you readers are worth it.

And why not? They’re going to get new cards that are 4 colors. I have to imagine there will be at least one good creature and one good spell per deck that are 4 colors and if it’s that hard to cast that spell, the effect is going to worth it. Just look at the spells we have now that cost 5 mana – Coalition Victory, Last Stand, Conflux, Maelstrom Nexus – these are good spells. They’re difficult to cast because they require a mana of every color and they’re even more difficult to cast in EDH because we have to have a general with all 5 colors in their identity.

4 color spells are obviously easier to cast than 5 color ones but not all that much easier and, again, you can only play them in a deck where the general has all of those colors in their color identity. How are people going to cast those spells?

This one seems obvious, but it’s worth mentioning. There are a few ways I think people will try this. 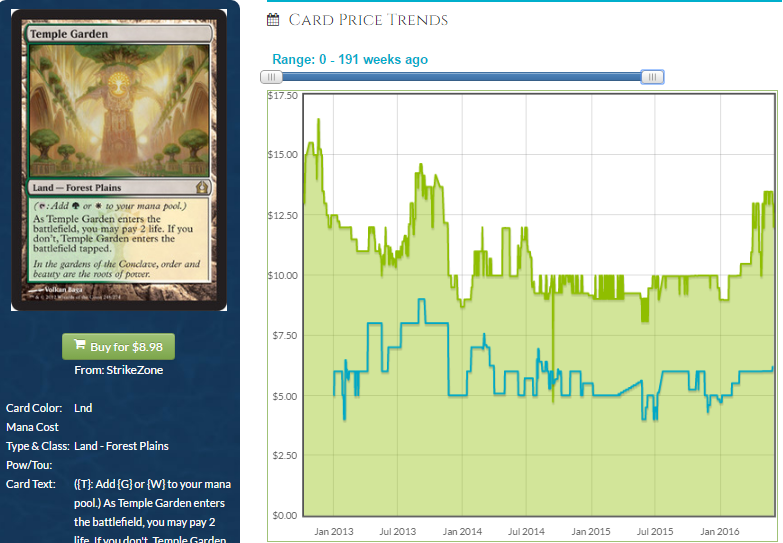 These would have been better to buy at their historic lows, but now that they’re starting to rebound, it seems fairly obvious that it’s time to get these if you need them. You can fetch these with fetchlands and Farseek and you don’t need to shell out for a Savannah to get basically a Savannah. Sometimes people put ABU duals in EDH decks. Super, go ahead and do that. Or, you know, sell them and build a new deck for basically every dual you sell. I’m not trying to tell you how to live your life, but I will tell you that shocks are going to go up more and people will need them. In a 4-color deck you can play a lot of them. You can play 1 in a 2-color deck, 3 in a 3-color deck, 10 in a 5-color deck and 6 in a 4-color deck. If every new deck that gets built means the builder needs 6 new fetches, they will be closer to $20 than $10 in a year or two if they’re not reprinted. Return to Return to Ravnica doesn’t seem all that close so I think we’re safe for a minute. 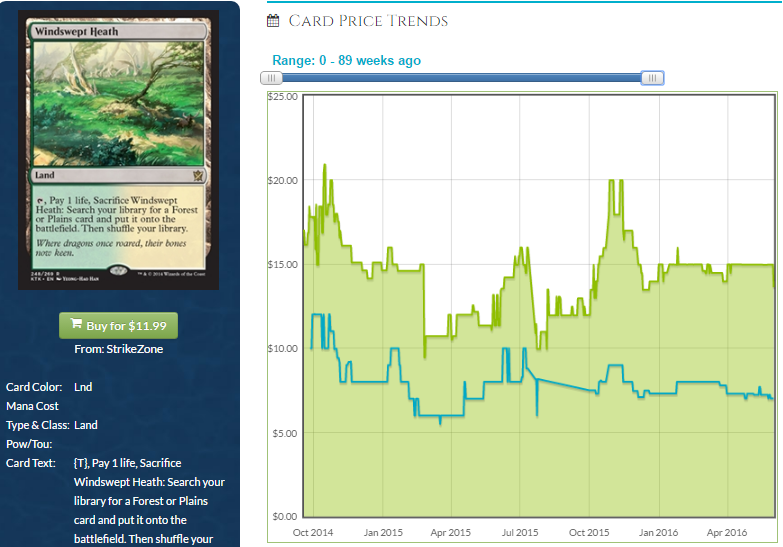 Ditto here. These aren’t at a historical low or high, but I bet this plateau means they’re not going anywhere for a minute. Dealer interest is waning, so I’d wait for these to crater and recover, but EDH demand could give these some upside, although supply is super high right now with everyone having them in their decks and binders, still. 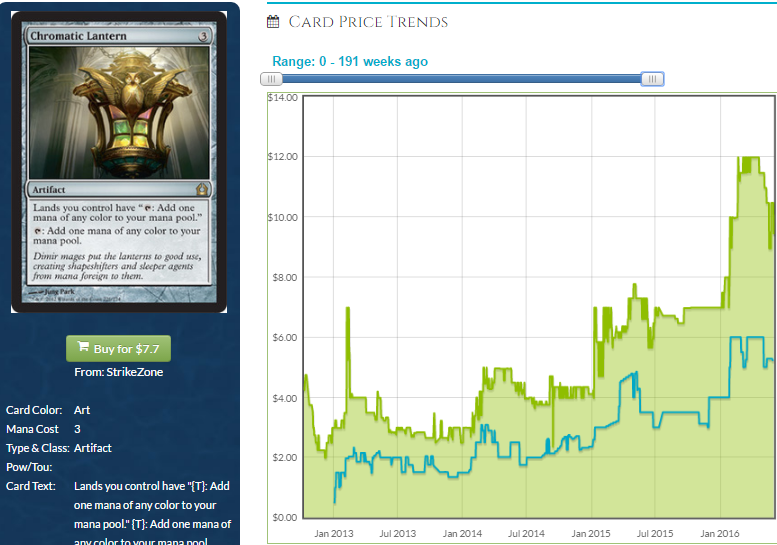 Them putting these in every deck seems as unlikely to me as them putting them in only some decks. I think this doesn’t get reprinted and I think the price goes up. Conspiracy might be a good venue to print this but I bet they won’t. I bet this card gets ridiculous before it gets reasonable. 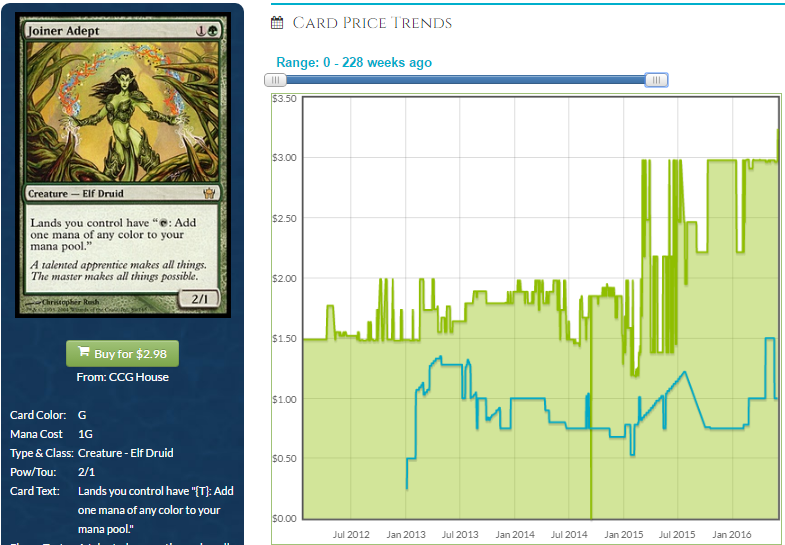 This card has some real upside. It is a creature that is also mostly a Chromatic Lantern and people are starting to notice. With a new focus on mana fixing, this is going to be a player if people remember to use it. This even lets you use utility lands for mana if you have something like Tabernacle (you don’t have a Tabernacle) or Maze of Ith that doesn’t tap for mana. 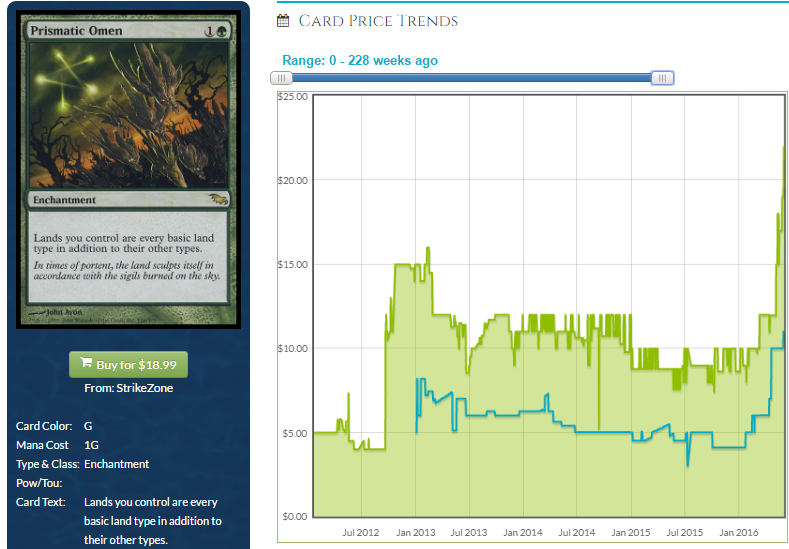 This probably won’t get bought more because it’s so expensive, but I bet it gets played more. EDH demand could start to make it disappear from Pucatrade which could signal other markets. 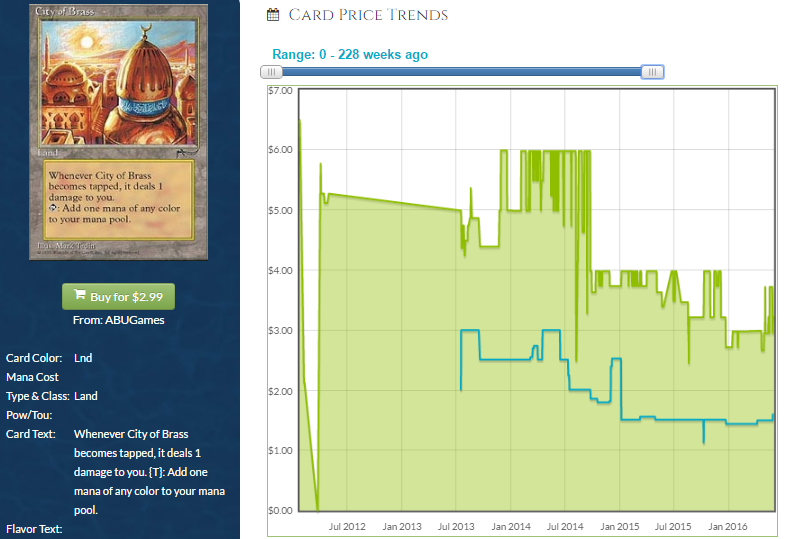 This are like $2 in other printings. That has to change the farther we get from the last time it was printed.

How else will people play stuff in 4-color decks?

Not at Magic, necessarily, I mean they’ll cheat stuff into play. There are a lot, lot, lot of ways to do this and they all have upside. 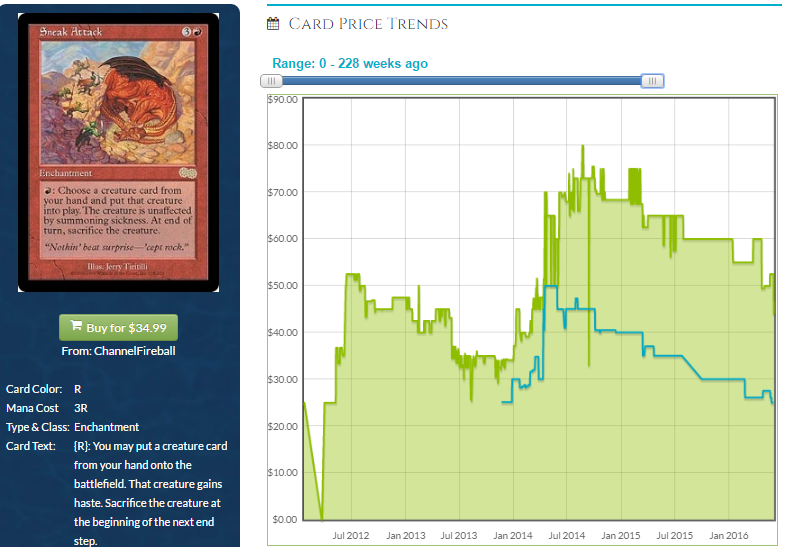 A guy with this in his Legacy deck isn’t going to trade it to an EDH player. He won’t want any of the cards the EDH player has. But some rando busting this in a pack in the LGS might be inclined. The new supply might hurt the price for a while, but if it gets low enough, EDH demand could buoy the price based on people who wrote the card of as unobtainable before now using it. This is a fine way to cheat. 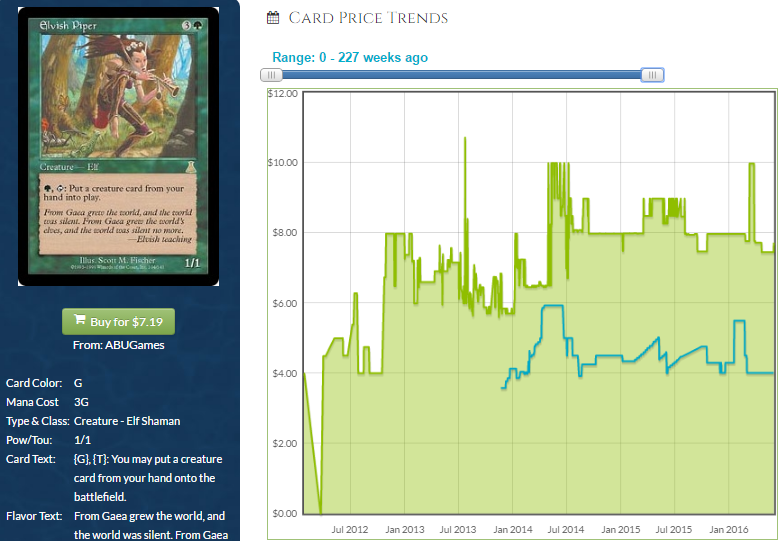 This has been printed a ton but the price doesn’t seem to want to dip below around $7. This has a decent reprint risk but it also has demonstrated an ability to mostly shrug off reprints. I like this as a pickup. 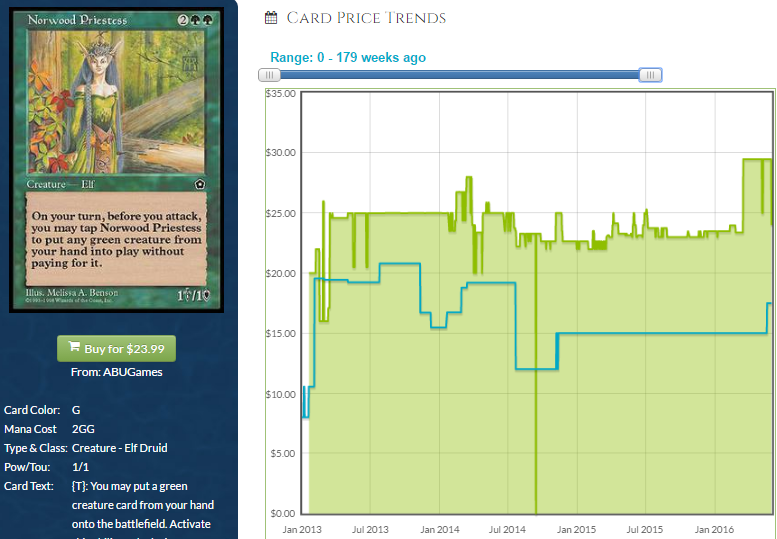 Meanwhile I bet this never gets reprinted. This is starting to move up and I bet if more people play it because the new creatures are savage and hard to cast, this could see movement. This is just a solid gainer in my view and it looks like markets and dealers are finally on board with that assessment. 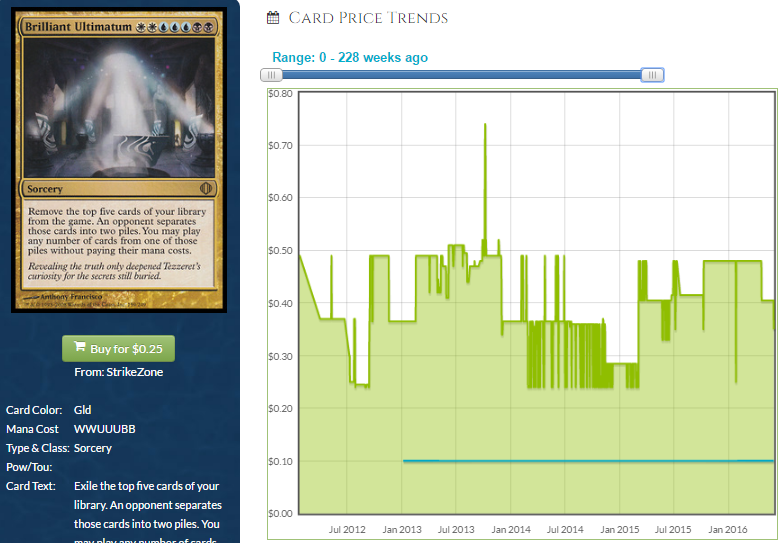 It would take a lot to drag this above bulk but it is worth remembering this card exists. It’s too good. 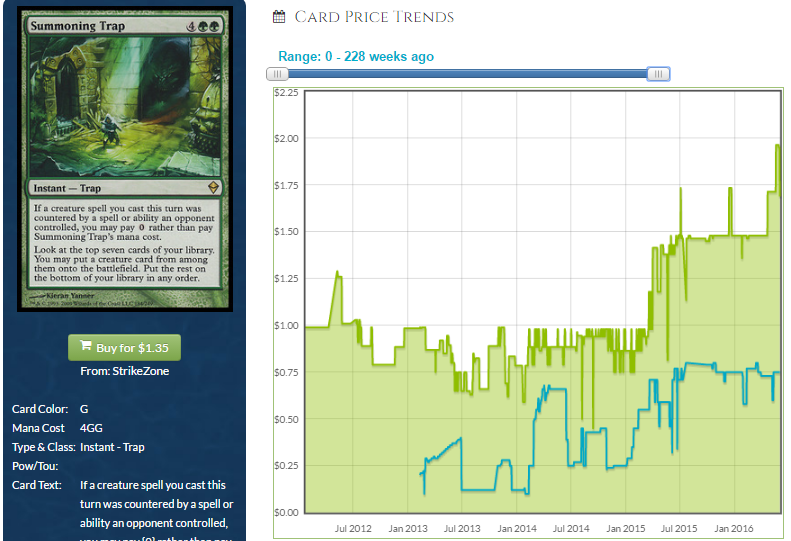 Bet you thought this was still bulk, didn’t you? Well, it’s not. The price has basically doubled in the last year and that’s good for business. This is on its way up and I bet this could hit $5 if it’s not reprinted. And why would it be reprinted? 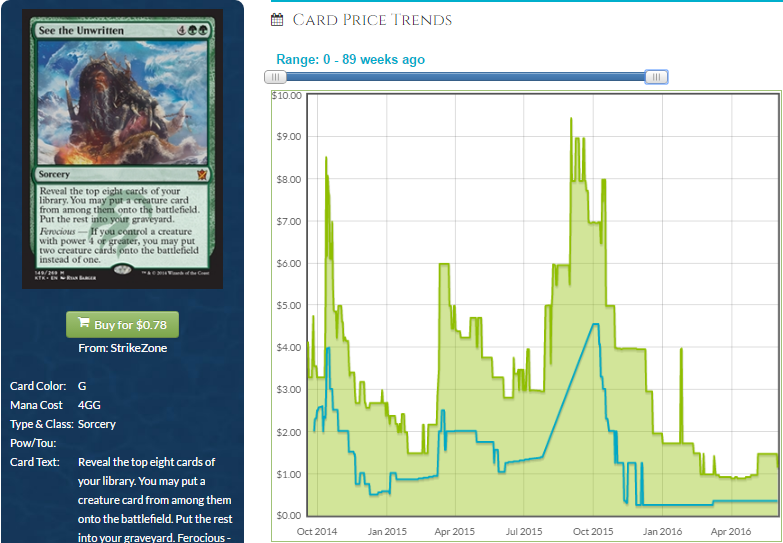 I’ve made money off of this card twice and it would please me to do so a third time. With copies concentrated in the hands of dealers, how easy would that be? Very easy, that’s how. Very easy. 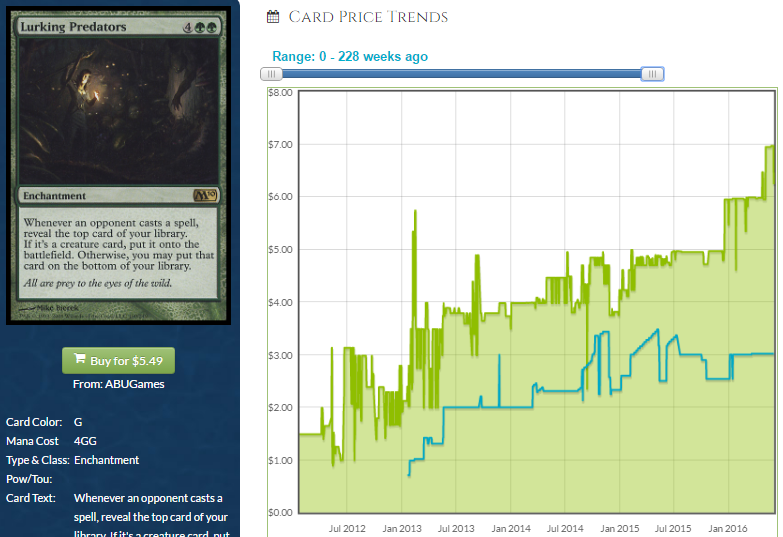 Mirri’s Guile, Sylvan Library and Sensei’s Divining Top are nice pairings with this spicy vintage. Cream of the Crop, too. All of those cards can go in a deck that can have green in it. Mayael, anyone? 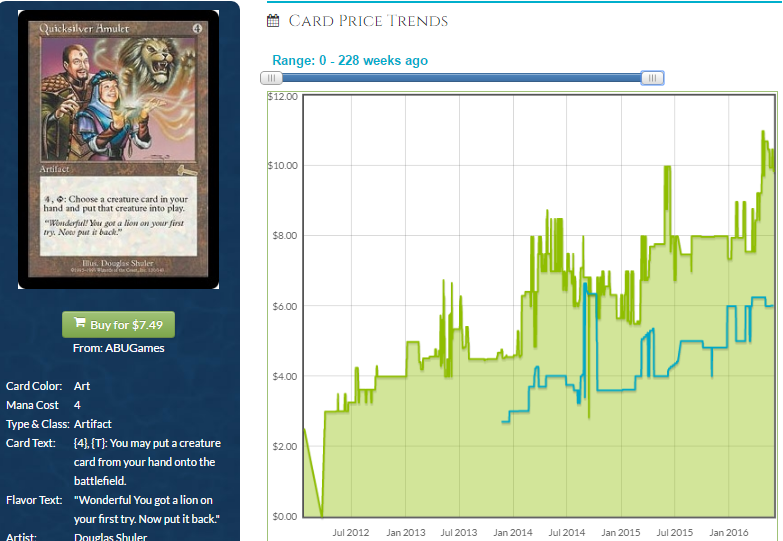 I bought all of the copies I have years ago for $2 each. That’s about as fair as putting something into play with this. Granted it’s not the best way to throw out an Eldrazi, but can you really complain about having a creature that big if you miss a few of its triggers? It That Betrays doesn’t mind getting tossed out EOT with this beauty. This card isn’t even close to being done growing. 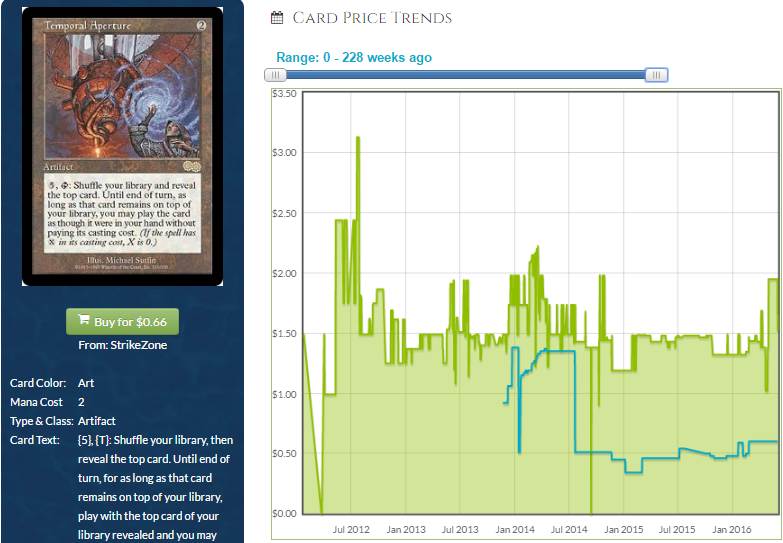 This may do it randomly, but don’t pretend it’s not cheating. This card is rare from an old set and it’s on the Reserved List. If this gets any notice at all it could hit $5 fairly easily and it would be pretty boss to chop into Pucapoints rather than buylist for $3. 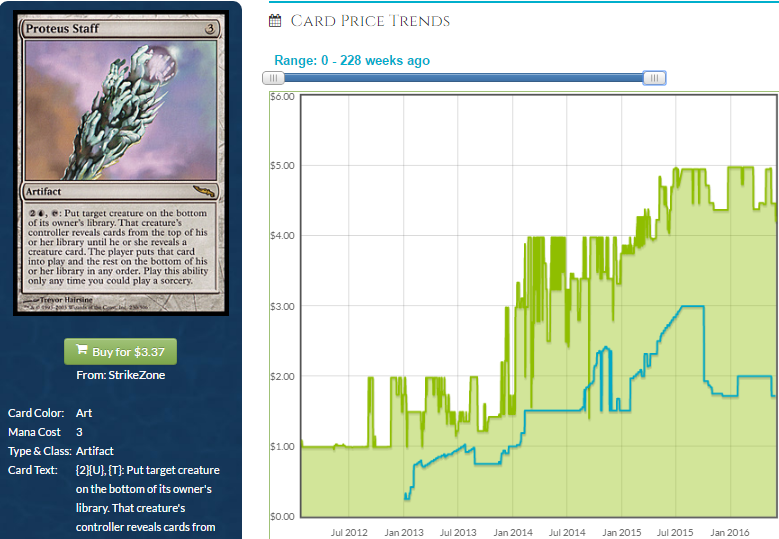 Everyone realized this would be nuts with Narset and the price went up accordingly. However, this is a great way to cheat creatures into play. If you have nothing but fatties and tokens, it’s even better. This is taking a break from climbing, but it will be back at it as soon as something else is printed that is saucy with it and there is only one deck from Commander 2016 that won’t have blue in it meaning you have 4 chances to find something saucy to go with this. 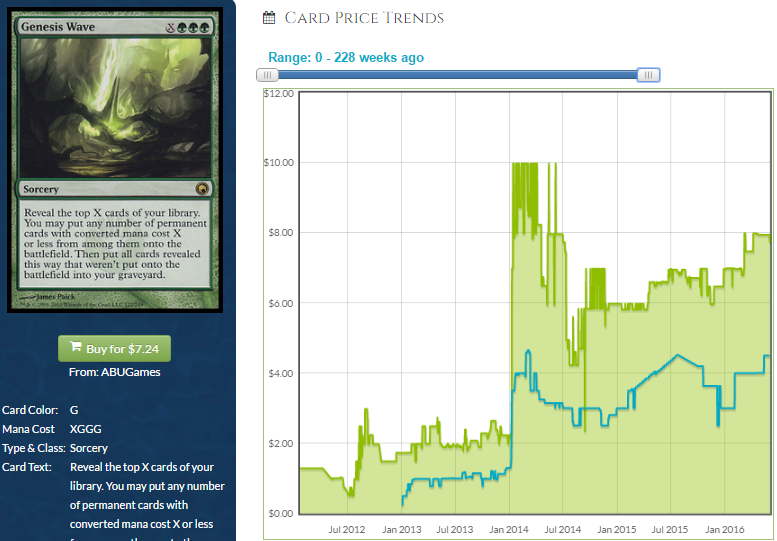 Modern spiked this card, which sucks because that deck doesn’t play it anymore, the price is really high for an EDH card and the copies are concentrated in the hands of dealers meaning a second spike will be much harder and faster. The only bright spot is that this seems relatively easy to reprint. Just kidding, that’s terrible because everyone who paid $10 for these will eat it in that case. I don’t know when they’re going to reprint this, or even if they will, but this is destined to go beyond $10 just on EDH demand and it’s too much fun to play this card. Dealer confidence is creeping up which means they’re selling copies which means the price shift is organic and predicated on real demand. This bodes well. Graphs that look like this make me want to buy. 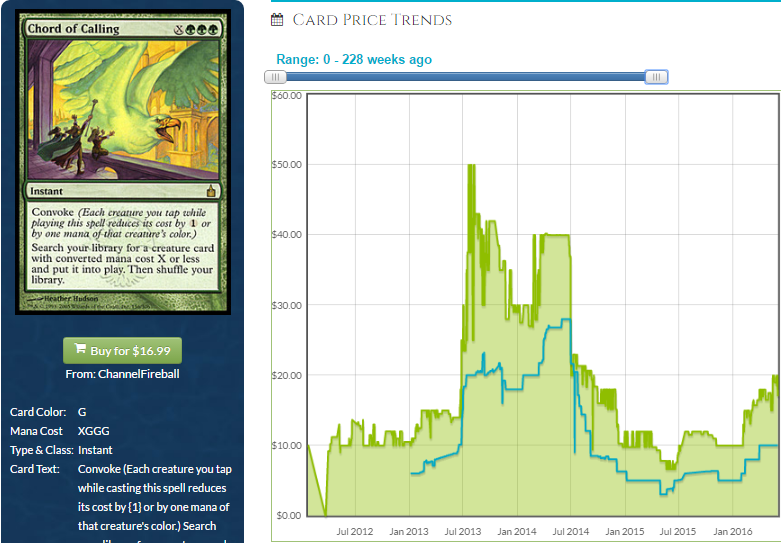 This is on its way back up. The reprinting made the price very reasonable but Modern hasn’t gone as cuckoo for this as they did a few years ago and the new supply did wonders for controlling the price. This is a very easy way to cast a creature with a nutty effect and goofy casting cost and you can even tap tokens to do it. What could be better? This is a fine way to cheat at Magic. 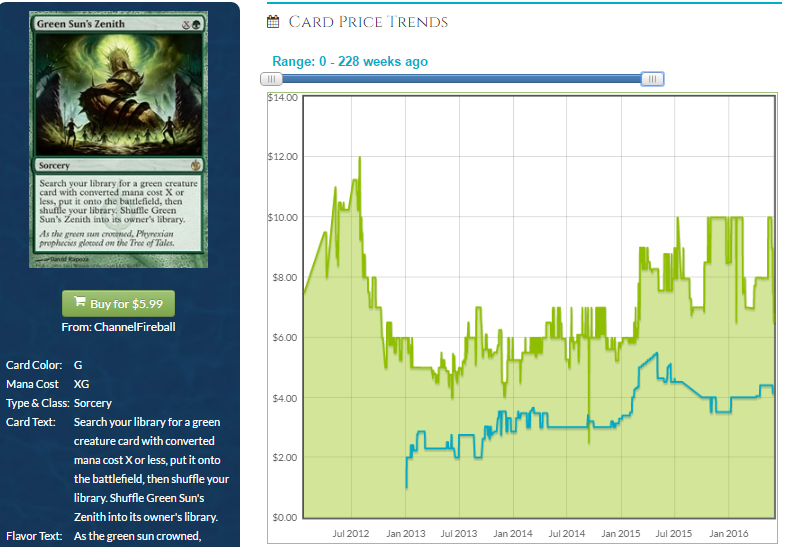 Legacy and EDH are keeping this card pretty expensive since it’s banned in Modern. Eternal Masters copies are going to make this dirt cheap and if this hits like $2 I recommend investing like $100. It could get reprinted again which will make it take a while before you can recoup your $100. More likely is that it recovers and lands around $5 because it’s so good in EDH. Less likely is that it’s unbanned in Modern and becomes like $15 overnight and then you look like Nostradamndamus. I’m not saying it will happen but I am saying that there are three basic scenarios and in the worst case you still break even eventually. 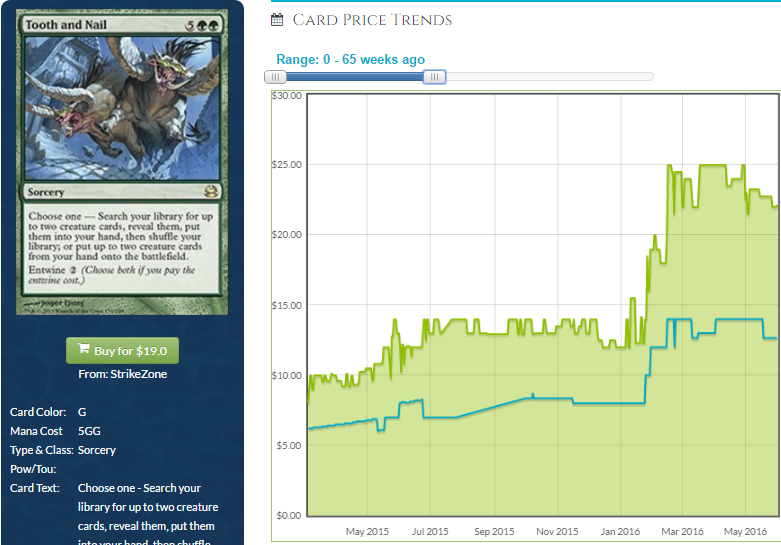 This card is very expensive. This card is also tailing down a bit and since it’s demonstrated the ability to be $25, you might want to watch it crash then buy in because it will go back up because how could it not? It’s Tooth and Nail. This is in so many EDH “I win” combos it isn’t funny. No, seriously, have you lost to this card? It isn’t funny. It’s annoying. I cast this entwined to get Kiki-Jiki and Zealous Conscripts on turn 4 one time. It wasn’t funny. I mean, it was to me, but when 4 out of 5 people at a table think something isn’t funny, maybe you’re the one who’s wrong. That’s Comedy 101.

At this point, I’m going to audible and save my second thesis for next week. We still have plenty of time before we start getting any cards previewed so we can look more at how players are going to cheat using the new cards next week. I have plenty to say on the topic and I really don’t want to load this article with too much information. Let’s reconvene next week and look at a second way I expect people to cheat using older cards to help them cast newer cards. It should be a hoot. Until then!