I’m pretty starved for spoilers, as are all of you, I’m sure. I was about to do a whole article about zombies with upside based on Gisa and Geralf or an article about lands you should get in foil because they’re harder to reprint in Commander precon decks and luckily I procrastinated a bit. I waited until it was 8 AM on the west coast and was rewarded with a juicy spoiler that made me happy that they’re finally spoiling Conspiracy cards, although waiting this long means they’re going to dump a bunch at once and they’re going to do with same with Commander 2016 which comes out in November. I’m not looking forward to getting one spoiler a week and then getting 300 spoilers in one day, but I guess what we want as players doesn’t really matter. What does matter is that the new card is sweet. 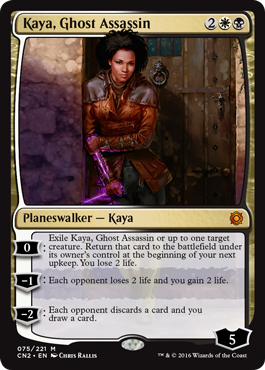 You’ll notice it doesn’t have any + abilities, forcing you to use her 0 ability to blink and reset herself if you want to keep using her other abilities. However, you can also use her 0 ability on other creatures and that’s what we should focus on because that makes her a great candidate for a few decks that already exist in EDH and which could see a bump in interest with this new tool and with other potential cards for the deck being a possibility in Conspiracy 2: Throne Boogaloo.

We have written a bit about blink stuff before but this spoiling is another event and events are worth talking about. Could this be this set’s Dack Fayden? If it is, what does that mean? Do I mean Dack Fayden in financial terms or just in buildability terms? Let’s look at implications of printing a BW planeswalker.

Last time we had a Planeswalker named Dack Fayden. While everything else in the set tanked, Dack soared. Non-mythic rares, even good commanders, sort of became bulk and a lot of expensive Legacy cards tanked, also. This meant Dack had to soak up a lot of value since it was the card in the set with the highest demand. 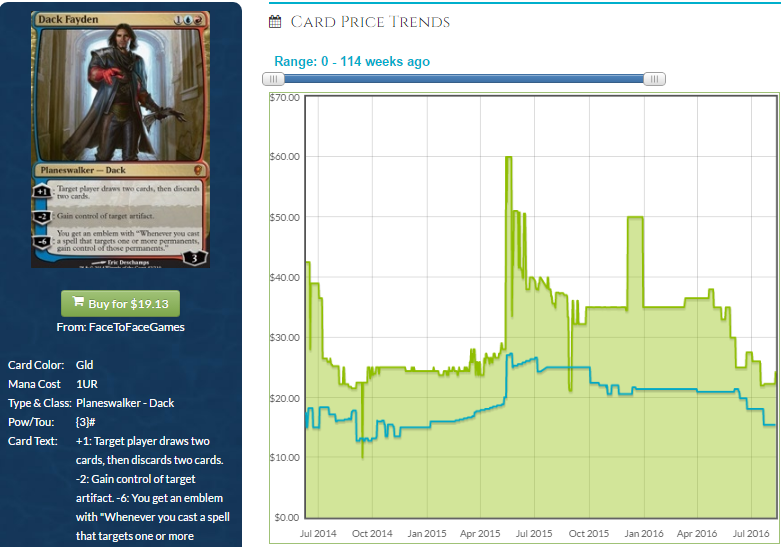 Even after an Eternal Masters printing cut the price in half, this is still over $25, which is insane. Before the reprinting, the foils topped out at $600, briefly.

Financially, I don’t see Kaya being anywhere near as financially relevant as Dack Fayden. She’s way less exciting and the value of Conspiracy Dos is going to have to come from other cards due to how exciting she isn’t in Legacy and Cube, etc. From  financial standpoint, calling her Dack Fayden is a little premature and probably super inaccurate.

But will she be the only planeswalker? If she is, will there be room in the set for another card that makes people excited about playing an Obzedat or Ghost Council deck in EDH? How likely is that? Could Obzedat or Karlov or something similar be in the set?

Based on the last Conspiracy set, we had one gold card at rare or mythic and one at uncommon for each of the ten two-color combinations. Can we expect the same this time around? If so, don’t expect anything to serve as a “tell” to players that they want to build some sort of Obzedat blinky deck because we’re more likely to get Unmake in that spot.

This was a Magic judge you probably all know spitballing about the set. Could Kaya being 75/221 mean every card after her is a land or gold card? A ton of gold cards in the set would mean that there is plenty of room to reprint Obzedat, Karlov, Teysa and any number of other Orzhov baddies that could lead to a run on Orzhov staples predicated on Kaya.

Bad news. If we again look at the last Conspiracy set, Dack Fayden was card 42/210, Brago was 41, Vampire Hexmage was 133 and 210 was Reflecting Pool. We simply can’t glean anything about how many gold card we’ll have based on the number in the set and I don’t think it’s reasonable to assume there will be more gold cards in Conspiracy 2. There will be 11 more cards than last time, but those are likely more conspiracies or some cards related to some new wrinkle in the rules. If there are 11 more gold cards (10 and a land or artifact, obviously) then there will be one more card in each two-color combination, possibly rare, probably common. I don’t expect more gold which means Kaya is on her own to get people excited about playing a Planeswalker that spend every third turn flashing herself out to reset if you’re trying to syphon everyone’s minds.

But Kaya still has the potential to be an exciting card and could be a benefit to decks in black and white that are already blinking stuff. Does anything bear looking at that didn’t bear looking at when we talked about blinky stuff when Eldrazi Displacer was printed? I bet there are some opportunities, especially in black. Let’s take a look.

Preparing For a Rising Tide 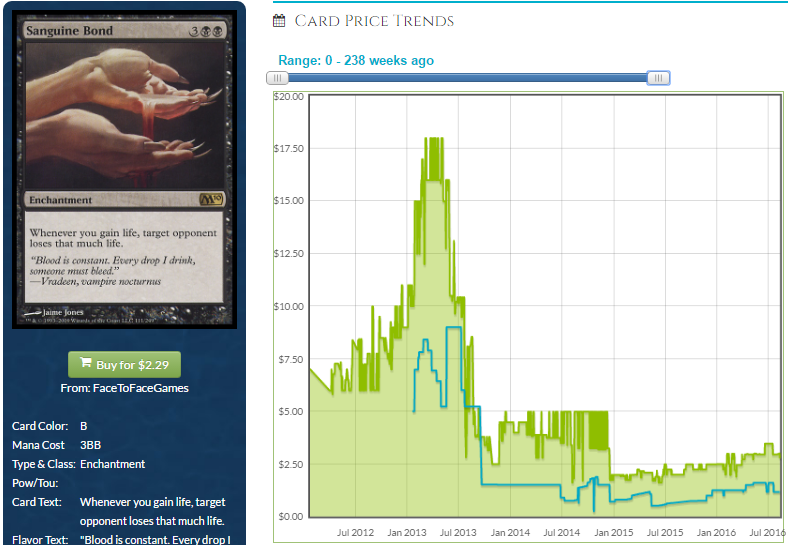 Sanguine Bond has been printed 3 times, I don’t see it being printed soon and I think it’s got upside at its current price. It’s half of a devastating “if life totals change, I win” combo and it’s already beginning to recover from its third printing. Exquisite Blood is the limiting reagent, here, and that has more chance of tanking from a reprint than going up and I don’t like advising people to buy $12 cards hoping to sell them when they hit $15. Instead, I think scooping a ton of the loose copies of Sanguine Bond, the card that’s better on its own, frankly, is the play. You’re going to ding them when you gain life, making your Exsanguinates even more saucy. Using Kaya to blink Gray Merchant of Asphodel? Turn it into an even faster clock. I see opportunity here. 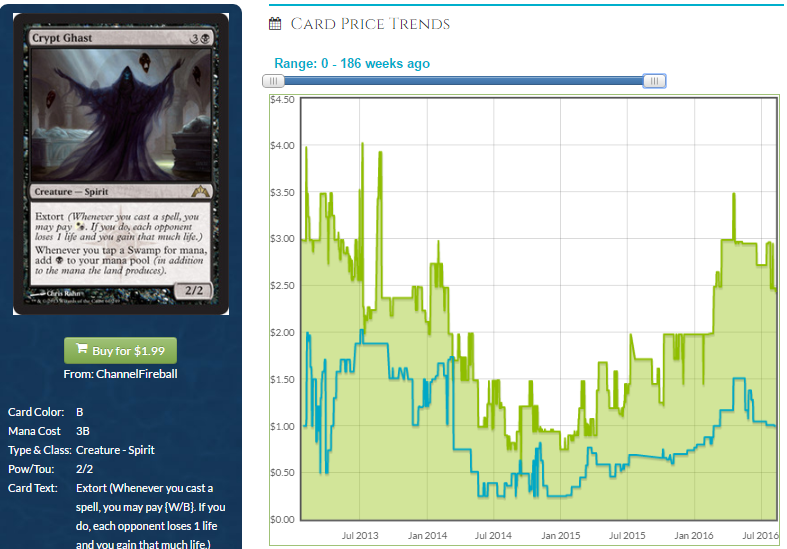 Now here’s a card that didn’t really seem to mind getting a reprinting and has already started to shrug it off. If you bought in at the floor like a smarty, you’ve already doubled up. This card has moderate reprint risk since it’s such a powerful staple, but we’ve had the Orzhov and mono-black Commander precons already and with 4 color decks this year and 2-color (Orzhov won’t be among them) decks likely for 2017, it could be quite a while before this is reprinted. There is always the risk it ends up in Conspiracy or one of those Planeswalker decks, but I think this is pretty safe and it’s going to go up. So far we’ve looked at two cards that were reprinted in Commander decks and are rebounding. The better a card is, the better an opportunity to buy becomes when it tanks after a reprinting. Maybe when we get the full Commander 2016 spoiler, I’ll look at some cards I expect to crater then recover. 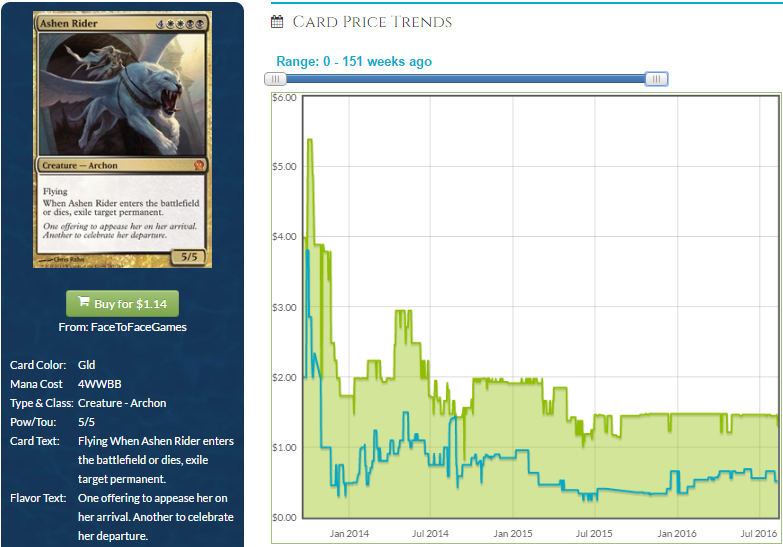 Hey, this guy works pretty well in a deck with a planeswalker that can remove creatures from play and then put them back into play later, doesn’t it? It sure does. This has been flat for so long I’m starting to think that maybe EDH can’t drive prices at all. Hundreds of decks on EDHREC employ this card and while EDH demand will be slow to move the price at first, once the market’s $1 copies dry up, these will be expensive to restock. Cheap copies gives you a chance to buy cheap foils for now. All in all this is a card I keep saying is going to go up, and it will. I don’t know how long it will take, but it’s going to be worth it when it does. 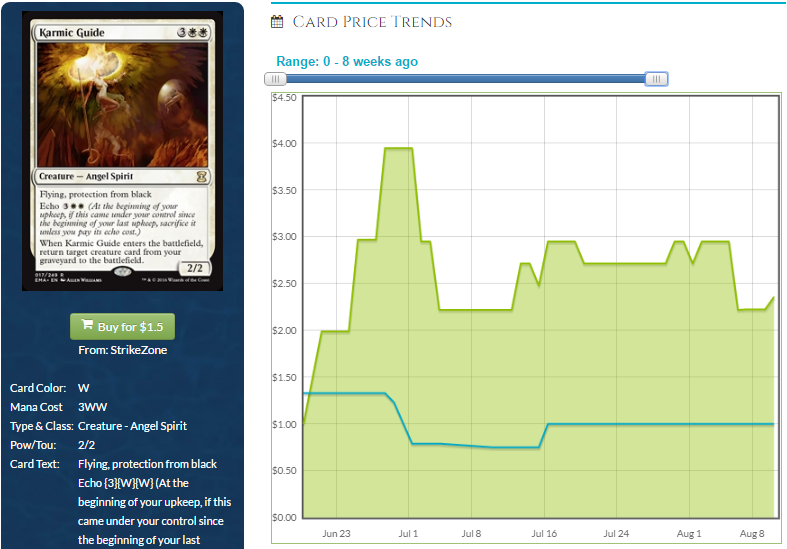 Nope. As someone pointed out in the comments below, Karmic Guide has protection from black, making it a poor choice to try and blink with Kaya. You can jam it in the deck and use Eldrazi Displacer or you can use Deadeye Navigator or Mistmeadow Witch but you’re not going to get up to any shenanigans with Kaya. How long has it been since I read the text box on Karmic Guide? I’ve mostly been gesturing at the card, grunting, tapping 1U for Deadeye Navigator and grunting again when I put something from my graveyard into play.

Sharuum, for example, has a lot of cards worth blinking.

Some cards, like Gilded Drake, aren’t worth mentioning because they’re expensive. Not that Sharuum plays Gilded Drake, but you know what I mean. Drake is good with Kaya. I could easily have just not included this paragraph, I guess. Oh, you agree? Well if you’re so smart, you write an insightful article about prices before they go up instead of after they go up. Let’s talk about Sharuum, fine. 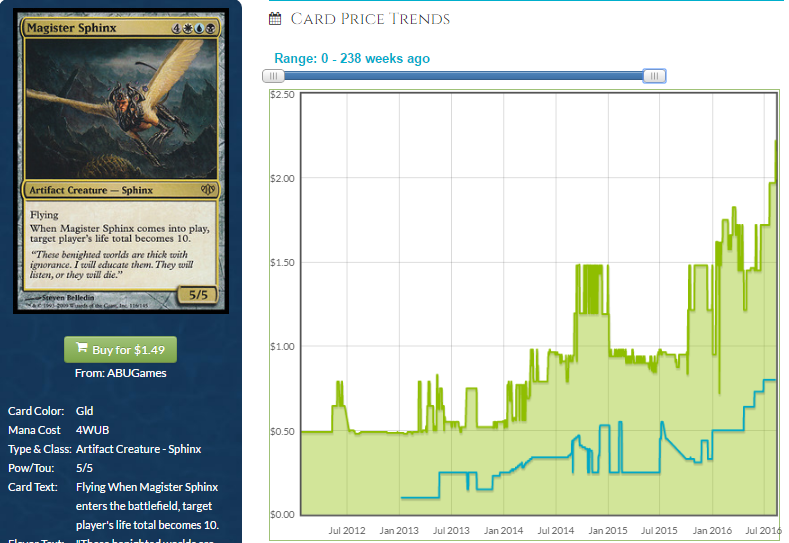 I’m pretty sure like a year or two ago I said “Man, that Archenemy printing ruined this card but this could go back up over time” then forgot about it. I can’t find the article where that would have been, but this did what we expected and it grew. This still has room to grow. Have you noticed it puts someone to 10 life? I’ve dealt trillions of damage with this card before, which felt really good. Infinite lifegain combos don’t always cut it, remember that. Some playgroups errata this to reduce their life to 20, that’s how bad this feels when you smash someone in the teeth with it. I’ve even used this to draw my whole deck with Necropotence looking for combo pieces, resetting my life to 10 as needed. This card is good with blink and we have more ways to blink it. 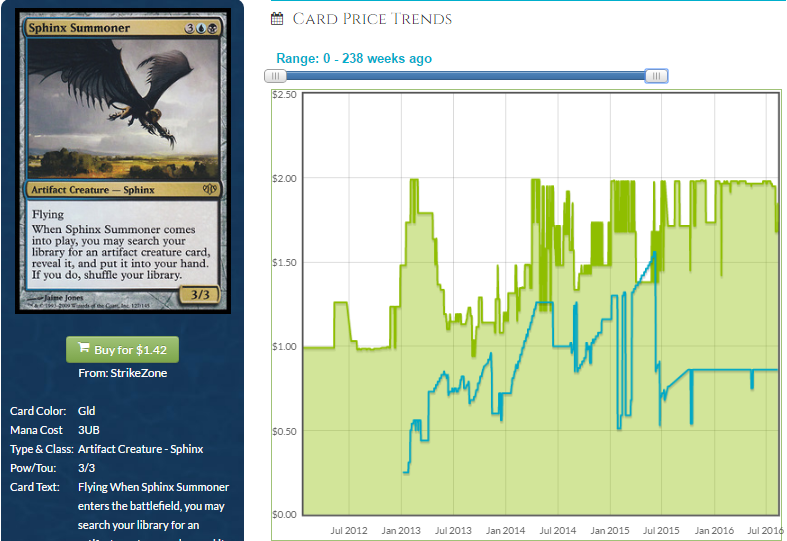 I think this must have been some sort of promo if the foil is under $4. I feel like I thought that last time I looked at this card’s price. I may have even noticed the recent arbitrage opportunity (the white area where the buylist price is above the retail price forming a white triangle under the blue line). This is a good card, it’s good to flash, it’s good to play in Sharuum and I like it a lot.

There are a lot of cards that interact with Kaya – Karador decks do some shenanigans, for example. The point is, we have some time before the card even comes out and people start testing with it in earnest and then start buying the cards. Some of these will go up because of Kaya, others will go up over time and some of these are cards I already said would go up and did and I think they can go up more.

I’ll be hopefully delving into some more spoilers next week. I’ll try to stay on top of the regular spoiler coverage you’re used to, also. I’m staying right where I am, continuing to give you guys the best EDH finance content you should all be reading irrespective of whether or not you play EDH. That is not and has never been the point. As sexy as it is to watch someone play Liliana on camera at the PT and buy a bunch for $23 and have half of your orders get cancelled on Monday and then when they do show up the price is already plummeting and you list them on TCG Player and lower the price a bunch of times and when you finally sell them you cleared $2 a copy after fees… actually that sounds terrible. I’ll stick to buying Squandered Resources for $0.25 and laughing when PT prices spike. Thanks for being loyal readers and I’ll try to repay you by continuing to be an equally loyal writer. You guys rock.