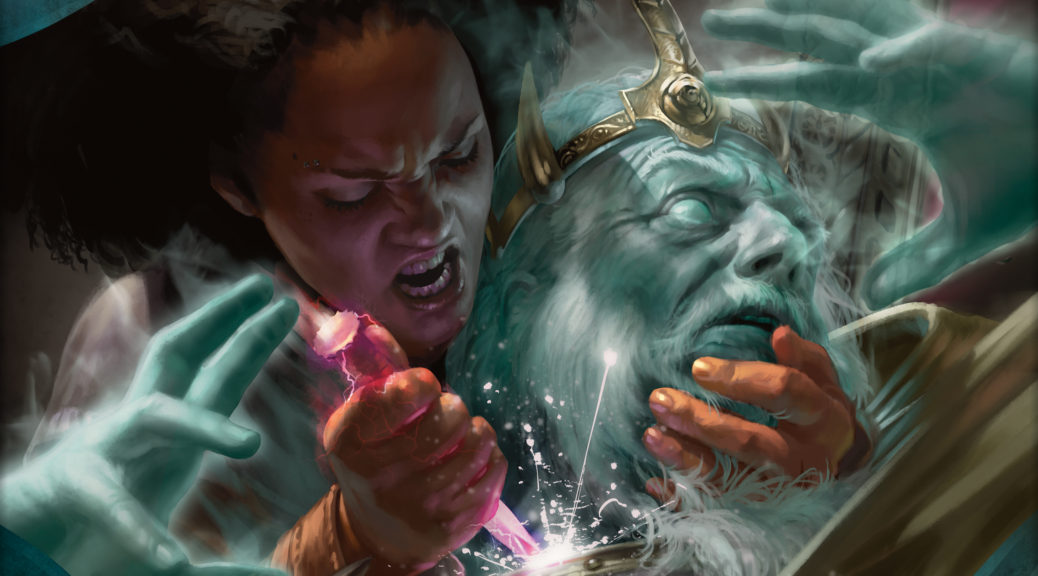 Spoilers for Conspiracy 2 have begun, and the early results are… concerning. I enjoyed Conspiracy 1 the few times I found people who were willing to play it, and the new mechanics so far seem to do a good job of addressing the inherent flaws in multiplayer Magic. On the other hand, there is a lot to be really nervous about from a financial perspective. Let’s start with the most obvious issue, one that we actually first broached when EMA was released.

EVERYTHING IN ITS RIGHT PLACE: When Mark Rosewater and company “discovered” the Magic psychographics (Timmy/Tammy, Johnny/Jenny, Spike/…Faye Valentine?), they were used as a means of explaining the various subgroups of players that particular types of cards appealed to. What has happened since then, however, is that we’ve seen a rise in smaller supplementary products which are geared more largely towards alternative types of play. In the big picture, this is a pretty good solution- too many big green idiots in a Standard set (an appeal to Timmy/Tammy) just makes green less playable in Standard. But printing a green Commander deck full of hydras and elves and ramp spells or whatever gives that type of player EXACTLY what they want (and all in one box!), without having to compromise standard for several months.

The system isn’t perfect, however. Some cards don’t fit neatly into one category or the other. Even though things like Lightning Bolt and Bloodbraid Elf look rather tame in Commander, things like Jace, the Mind Sculptor are still good enough to make the team. Additionally, and this is what we talked about with Eternal Masters, WotC wants to make sure that there are cards in these ancillary products for other types of players/formats. That’s where things start to get complicated. It’s easy to put a few splashy and interesting rares or “build-around-me!” uncommons in a normal set and keep people happy. For players who aren’t deeply entrenched in Magic or playing in sanctioned events regularly, it’s often enough to keep them interested. With things like Commander decks, supply-side factors like “making sure we print enough of them” and “maybe don’t make things like True-Name Nemesis anymore” have solved the problems that come with putting Legacy-defining cards in otherwise casual products. Ultimately, Conspiracy is neither of these things.

Let’s assume that there are three roughly equal markets for a product like Conspiracy: Constructed Magic1 players who want saucy reprints, Commander players who just want new stuff (and different flavors of saucy reprints), and people who play things like Cube or other casual formats. Because WotC can now direct entire product lines (in this case, an entire draftable set) at a subset of players that AREN’T tournament-oriented, they need to include cards that appeal to these other markets as a means of buoying interest among the underserved populations. Plainly, we want to make sure this sells, so some of the cards are not going to be for the people this product is meant for. In the first Conspiracy set, that was made obvious by things like this:

Only to be followed up by this:

And (BREAKING NEWS!) potentially this:

If all of these spoilers are true, then it’s going to be interesting to see what percentage of rares/mythics are playable in Constructed. Why? Because (and this is not a sleight against casual players) the demand for tournament-level cards is stronger. Not necessarily “higher” (although we can’t know for sure), but you definitely need four REAL copies of Berserk to play Legacy Infect. Because there is no true pull to make sure that there are no proxies or worse versions of a card in your Kitchen Table Commander League, there is no pressure to get them at a time or price outside of your existing comfort level.

SUPPLY: If we can expect the majority of the remaining rares/mythics to be Conspiracy (the alternative play format) centric, then it’s very likely that this set holds a tremendous amount of value in a very narrow percentage of cards. Show and Tell is currently sitting around $65 on SCG, and they sold out of new Berserks at $50. Inquisitions are available around $13 in their previous printings, and Burning Wish is available for about $8. Ignoring foil prices, there are only two cards in the first Conspiracy set above $10. The majority of the rares/mythics in the bottom half of the price spectrum are multiplayer-oriented and essentially unplayable in Legacy. There is still some CNS available in most stores that I pop in to, but it’s largely because there’s not a huge drive towards getting it.

We don’t know the print run size yet, but it’s safe to assume that because this is a smaller market product (aimed at a narrower band of players, is not going to be in mass retailers like Wal-Mart) that it won’t be produced as heavily as Eldritch Moon. I expect a little bit of the product (10% or so) to stay on distributor shelves in case the product sells really well so that it can act as a proverbial carrot to move something less exciting (those new intro planeswalker decks?). A lot of it will get opened by players trying to get a set of Berserks and/or S&Ts, meaning that most of the cards in the set will bottom out right away. I don’t know how many copies of Adriana, Captain of the Guard YOU need, but they will certainly be available. Because things like Berserk are (nearly) impossible to print, expect these marquee cards to not show up again for several years. This is going to buoy the price once printing stops, and they’ll slowly creep back up after that. Also, because all the cards people REALLY want are mythics, don’t expect your local environment to be flooded with them overnight. You’re still going to have to work to finish out your Sneak & Show list.

Tune in next week for the shocking conclusion of my Conspiracy 2 analysis. That is, if the GOVERNMENT doesn’t get to me first. Or is it just a shadowy cabal of people who work in the government? And who does that alien bounty hunter guy work for? Them, right? You know, the one played by that actor who was essentially TV Schwarzenegger in the 90s? And Alex Krycek died, right? Man, that show was crazy.

The truth is out there,

1Bearing in mind that this set doesn’t affect Standard at all, and has, currently, one high-profile Modern reprint (at a higher rarity!). Constructed here really just means “Legacy and Vintage”.

8 thoughts on “PROTRADER: A Game of Crowns, Part I”