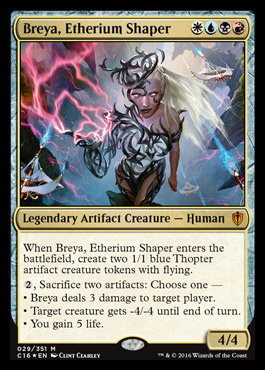 I was wondering there might be some overlap when I decided to steer this column into EDH territory since I’m already writing an EDH article. How would I differentiate the two? What I’m interested is not going to change day-to-day, is it? If I write about what I’m interested in, I’m obviously going to write about the same stuff and the two columns will bleed together. That’s what I thought, at least. The truth is, Commander 2016 has taught me that what I’m interested in when it comes to finance couldn’t be more different from what interests me as a deck-builder. When I build, I am super bored by the boring ways people are choosing to build Commander 2016 decks. The collective mass of all those stupid, boring, basic builds feels like a weight on my chest, crushing any creative impulses I have for fear of straying too far from the charted course and losing credibility somehow. When I buy cards, I like that weight. Heavy is good.

Boring means predictable. If everyone is going to build their stupid Atraxa deck the same way, we can predict what they’re going to do and get ahead of them and snag those cards for ourselves and a few extra copies to sell after they spike so our cards were free. If that is how you use M:tG Finance, you’re doing it just fine, in my view. You don’t need to be a hardcore financier to play EDH for free, you just need to think like one or listen to someone who is. Let everyone else build so basic that you could fetch their whole build with an Evolving Wilds. That just means it’s easier for us to figure out what they’re going to do before they do it and be ready for the cards they buy to go up. So what’s a build everyone seems to be doing the easy way?

How about the #2 most popular deck on EDHREC? Atraxa is #1 and we had a look there already, so let’s see if, unlike with Atraxa, people are being basic by adding cards that aren’t already in the precon. I think they will do some fairly predictable stuff and there’s money to be made. 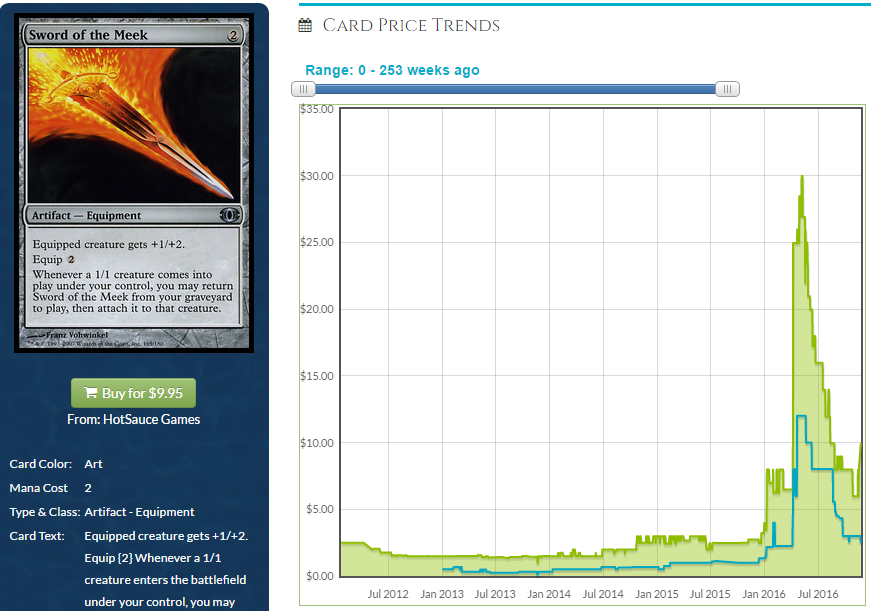 This is like $9 everywhere and Modern isn’t really picking up the slack we had anticipated it would when it was unbanned. Spiking to $30, this returned to reality quickly and might not be done sinking. So why are we interested in a card that may be overpriced at its current $9 and isn’t getting the play people expected in Modern? That’s fairly simple – Thopter Foundry comes in the same precon Breya does and Sword does not. Anyone who has been playing Magic long enough or who checks EDHREC to see that 43% of the decks that run Breya as a general are running Sword of the Meek (compared to 70% for Foundry so far. Even people who haven’t been playing long enough to know the Thopter Sword combo are smart enough not to take Foundry out of the precon when they tune it up) will want a copy to go with the deck; and why not? Breya can do a lot of work with a pile of thopter tokens and you can make as many as you have mana for and then use them to win the game. Make 12 thopters with your mana, sac 6 to Krark-Clan Ironworks and use the other 6 to blast someone for 9 damage to the face. Since you can get two mana for each token you sac to KCI, you can go off with these cards in play and gain infi life and hit infi faces infi times. Sure, it’s a 4 card combo, but one of those cards is your general and the KCI isn’t totally necessary since you can do the thopter sword combo with Breya and go non-infinite to generate a ton of life, damage or murder a ton of creatures. Speaking of which, 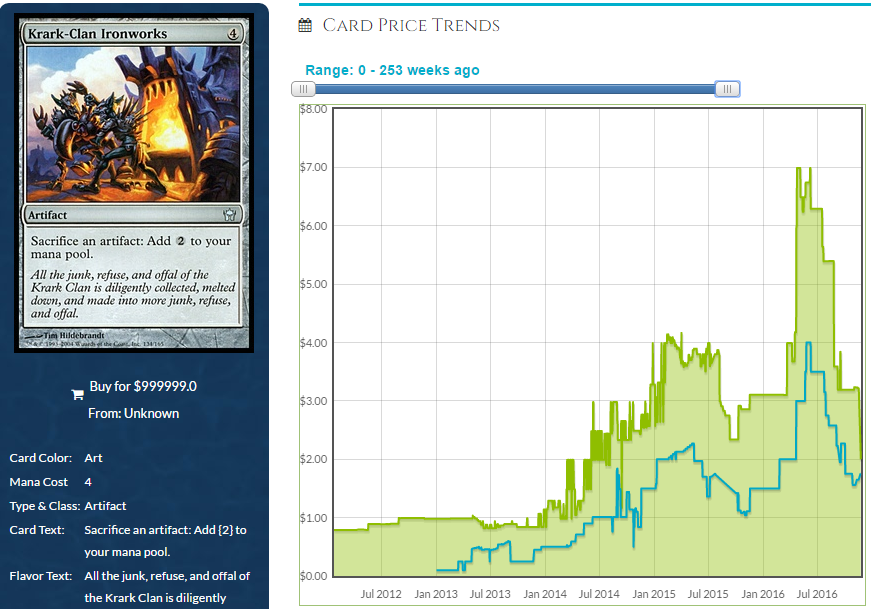 this is $4ish. I feel like this card is super reprintable, but it always seems to dodge reprinting. It’s unlikely a set that will be legal in Standard will print this because it’s so abusable and curtails the cards they can print alongside it. That leaves supplemental product and they’ve decided not to print this so far despite having lots of chances. I don’t hate this as a pickup at its current price but I feel a little hesitant. It just feels like it could get reprinted any minute. I realize that’s not a very anaytical approach to this, but I don’t like to buy in when I have a bad feeling even if data doesn’t bear it out. There are enough good opportunities I do feel good about, after all. If you don’t have some weird sense about this, I suggest buying a combo piece that goes in decks with artifacts. We’re getting Aether Revolt soon which means more artifact shenanigans which means every artifact EDH deck gets better and new ones will pop up. I don’t see a KCI reprint in Aether Revolt so I think this is safe-ish. This has seen $10 in the past and could again, so I feel good about this around $4 or $5.

Remember how much we like second spikes? Well here’s a card that’s due for one. 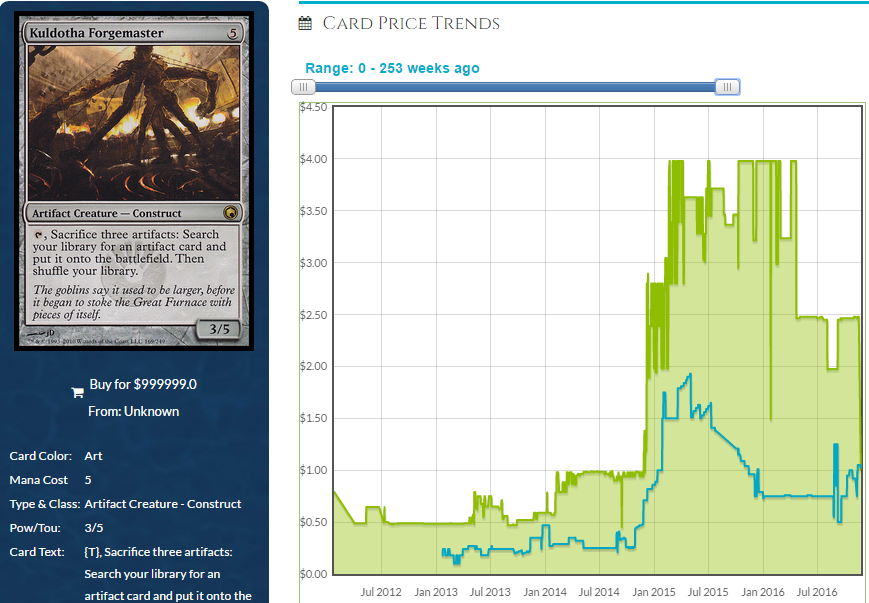 Some shenanigans in Modern made this spike a bit a while back to around $4 and I think it’s super reasonable for it to get there again. This is a very good card and does a ton of work in a lot of different decks. Artifact decks need sac outlets and tutors and this is both. A 4x multiplier indicates there is either EDH or Vintage interest (or both?) and while this is reprintable, it wouldn’t likely happen for at least another year. Breya plus Aether Revolt is pretty good for artifacts and this has spiked recently which means a second bout of interest in the card will increase the price more sharply. You want to get these now if you need them, and maybe buy extras. This seems like a fine target. 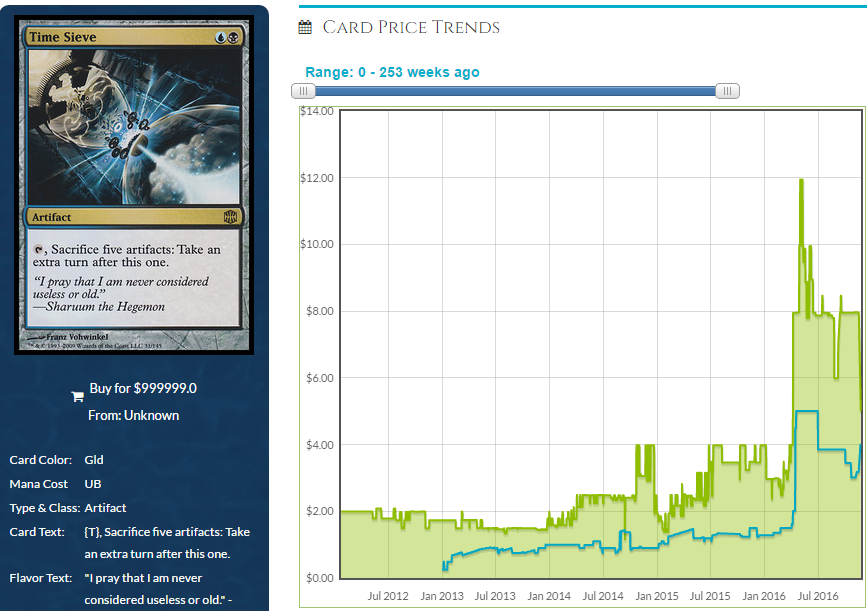 Thopter Assembly is a shoo-in for this deck, but with a million $0.40 copies of the stamped prerelease foil floating around, there isn’t much money to be made on that card. Still, its inclusion in the deck is natrually going to lend itself to people playing Time Sieve, another combo card. Time Sieve and Thopter Assembly go together like shocks and fetches and while there isn’t much money to be made on Assembly, it’s showing up increasingly in Breya decks (enough to make the EDHRCEC page at a 35% rate of inclusion – not bad for a card not in the precon) and that means cards that combo with it have upside. Again, Aether Revolt could give us some cards that combo very nicely with Time Sieve, also and by the time those cards are revealed, it will be too late to buy in because everyone else will notice, too. Accordingly, we’re not going to rely on Aether Revolt to give us stuff to make these cards go up, but we can allow for the possibility that prices will go up more quickly than anticipated and it makes me want to act on my artifact-based specs a little quicker than my general specs. 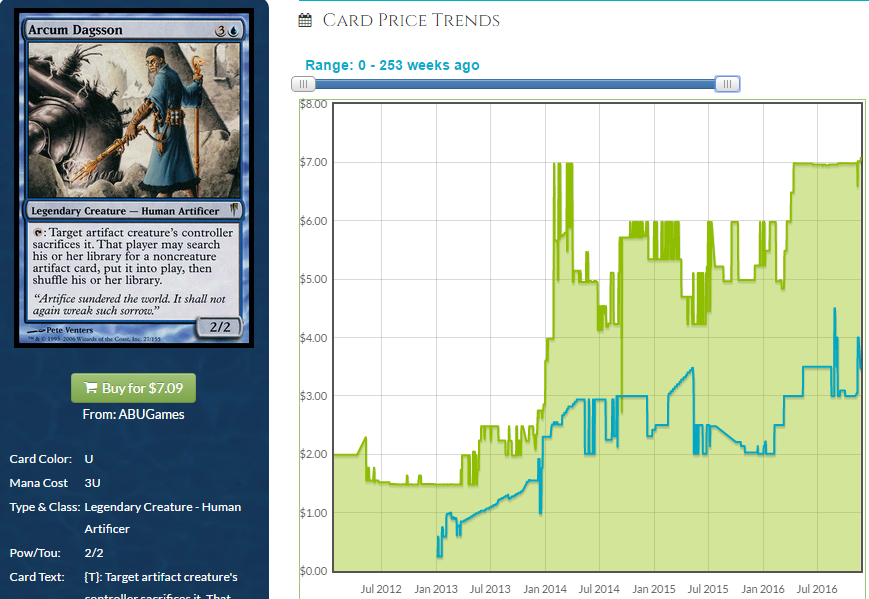 Out of everything we talked about today, this feels the “heaviest.” It has the most inevitability and the least sex appeal. No one is going to laud you as a genius for identifying this as a spec but you’re literally just going to make money if you buy this. This is your M:tG Finance 401k. It’s not very exciting but you can retire off of this. This is a card from Coldsnap. Coldsnap is a set they didn’t sell a lot of and which didn’t have any exciting cards at the time. Now Coldsnap is a $300 booster box (some on eBay are $400 and even $500 Buy it now) and has a lot of $5-$10 cards years later, including foil snow-covered lands. I’m not saying buy a box, I’m saying buying a box probably isn’t worth it. If Arcum isn’t reprinted and no one is going to pop those boxes of Coldsnap, $7ish starts to look like a great buy-in point for a card like Arcum. After all, he’s not just a great inclusion in artifact decks who can serve as a way to murder pesky artifact creatures like Steel Hellkite before they wreck you, he is also a decent commander in his own right, although EDHREC only has about 150 entries for him. He’s got combo potential, pairs well with cards like Umbral Mantle and Intruder Alarm and he’s only going to get more popular as we get deeper into another artifact block. His growth has been steady and consistent and I actually got a few of these in bulk rares sold to me a while back which goes to show that people underestimate this card. Demand isn’t the highest compared to other cards and the price still got to where it is now so any boost in demand should change the slope of the graph pretty precipitously. I like this as a pickup. 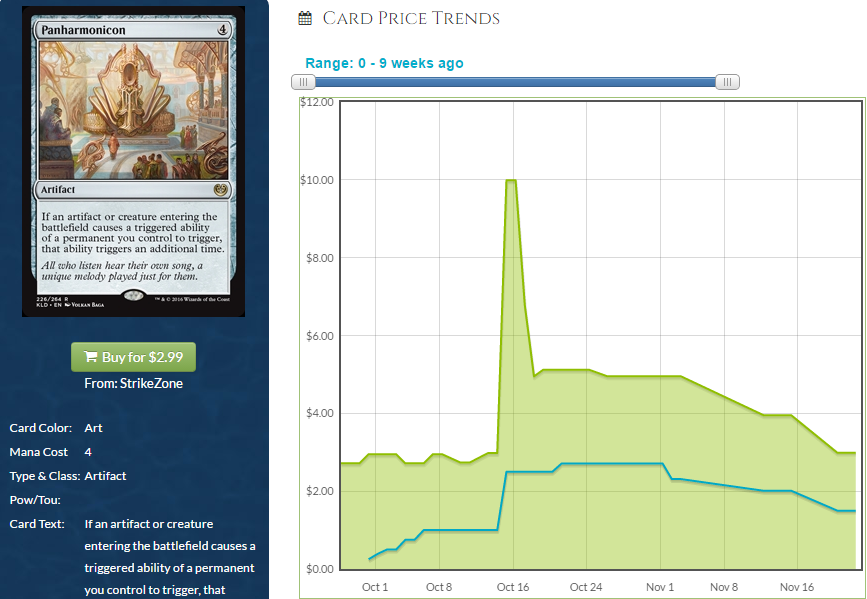 This is another card that’s obvious. I hope this gets cheap and someone doesn’t decide to go 3-1 on MODO with a deck that has this in it so we can scoop these affordably. This is Parallel Lives levels of obvious. It’s Hardened Scales reprintable, also, so watch that, but I feel like if you can trade any $2 Kaladesh card for this at $2 you’re almost certain to win in two years when the card you traded away is a dime and this is $5. Should I mention this card every week? It’s worth watching periodically because as soon as we deem the price to be cheap enough that it makes sense to buy in, there is real money to be made on a card this good. It does everything you need a card to do in EDH and it is even colorless so decks that don’t typically get effects like this can use it.

Obvious is good for us because obvious means a lot of people will all think of it independantly of each other. If you want an obscure card to catch on, someone has to point it out for that to effect the price and that person has to have enough reach and influence to make a big enough group all follow along to do anything to the price. Who needs that? Give me obvious any day. Let hundreds of people come to the same conclusion and fight each other for a limited amount of stock in obvious cards. Obvious means we’re less likely to miss it, also, and we don’t have to go to a bunch of obscure sources all the time to catch weird, obscure tech. Keep an eye on what people are doing and always remember, obvious doesn’t always mean there is no opportunity. WotC bundled a bunch of obvious cards with the Atraxa deck, which was frustrating, but one look at Breya shows us there are still a lot of avenues to profit. If they reprint half of a ridiculous combo, there is upside in the other piece. Half of a lot of combos are showing up in the Breya deck and it’s only a matter of time before people put two and two together. When they do, be ready.

That’s all for this week. Next week I’m sure there will be some more to look at from Commander 2016, so stay tuned, nerds. Until next time!

2 thoughts on “Heavy is Good”