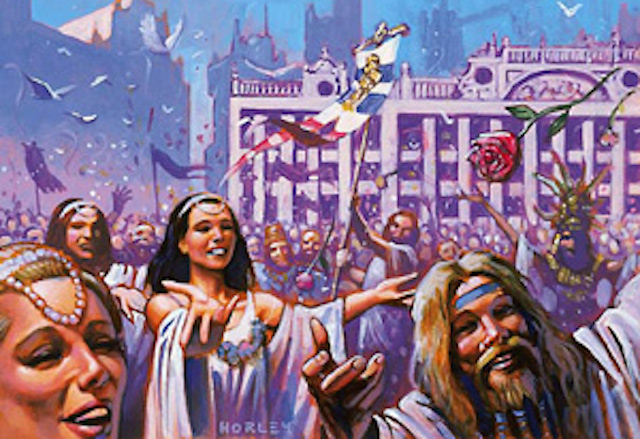 I’ve done it before and I’m bringing back the standby: The New Year’s Resolutions.

In case you want to delve into my past in this regard, here’s my list from last year, which includes a retrospective on the year before.

2016 was a pretty awesome year for me in Magic.

#1: Use PucaTrade to Acquire a Gaea’s Cradle.

Done! I paid a bounty, but my goodness, did it feel good to pick one up. I’ve chronicled my ups and downs with Puca in the past, but this year has been a very good one for me with Pucatrade. I’ve gotten a Cradle, multiple SDCC foils, a judge foil Sol Ring…yeah, it’s going well for me.

Like many others, I’ve had to work more at things since Future Site came along. There’s a lot of people who are trying to trade up via the site, and so it’s not as easy as it was. But I remain invested, and optimistic.

#2: Have a Regular Magic scene

Done! I don’t get to go as much as I want, but I’ve got good babysitters and an even better Commander group. Oh it feels nice, and there’s a healthy mix of insane combo and janky durdling.

Working on it. I did a lot more selling than buying this year, though, and I’ve decided to stick to playsets of things. I keep my stack of 50-odd Prophet of Kruphix in a clearly visible location. I’m not one for going deep anymore.

#4: Get and stay organized

Mostly done. I’m down to two binders. One for trading and one for long-term holds that don’t go into storage, as well as my signed cards. I just prefer keeping them in a binder, rather than a box.

I didn’t actually write this out here, I said it on Twitter, but podcasting is fun. It’s crossed off my to-do list, and I got to do casts with both James and Travis as they each went on warm vacations.

Ideally, I’d have the chance to do that more, but we will see.

So I’m going to have a couple of chances at this, in a variety of formats. I haven’t done it yet, and I don’t think any less of myself for it…but I really want it. I mean, REALLY want it.

It’s going to take more practice and more discipline from me. I know that I trade with a clear eye and a calculating demeanor, and I am good enough at Magic to make a day 2. I’ve been at this long enough to have come close a few times, and this is a goal I should be able to pull off. I hope.

It seems silly coming from me, someone who’s been writing about Magic finance for more than three years, but I’ve been taking a lot more profit out of my collection than I’ve been putting in. I sold my all-foil deck for a pretty penny this year, and that was satisfying indeed, even as it tore a piece out of my magpie of a soul.

Like many of you, I follow people on Twitter who sell cards every so often. I buy on occasion, when the value is there, but I know that I would be making more if I spent more. I’m not talking crazy stacks of money or cards, but I want to have a bankroll that is just for Magic, and not subject to the vagaries of how often I have to buy shoes for my kids.

One of the guys I play with has a powered Cube, and he loves it. He’s built and disassembled several over his career, and I want one.

However, I’m far too random for a stock list, and I am really leaning towards making mine an experience. I’m very likely to build the Reject Rare Cube, but I might pick a block.

It’s a nice feeling to know that there are enough people I play with regularly, that this Cube would see some play. I might foil it out, I might not. Foiling out something like this usually a profitable undertaking, but it’s so much work. I did it once and I’m not sure I have the patience for another go-round.

#4: Treat Magic as a social event, not just a game or a financial transaction.

I recently realized that a lot of my interactions around the game are ancillary to my primary goal: To have fun with other people.

Yes, I trade with an eye for value. I loathe being the one who gives up a $20 card for four $5 cards, unless that’s a playset of Eldrazi Displacer.

But what I get from this game hasn’t just been value. It’s been friends. It’s been fun. It’s been connections that I value highly, and I want a lot more of that.

You may have seen people recently questioning the EV of a Grand Prix Main Event. That’s valid, considering the prices. I’ll be writing about this exact issue as we get close to GP San Jose.

There’s a lot to be gained from everything else happening at these events, which really are conventions. Look around at a GP. Artists, accessories, a bazillion side events. Look at the people who got together for the first time in forever and rented a house together. Look at the kids and their parents playing alongside. Look at the sheer number of people having a blast, even the ones who simply measure their fun by how many unwanted commons they scoop up.

I want to keep my eye on everything that’s good about this community. There is a long way to go before it’s perfect, as we have too many players who aren’t welcoming or appropriate in their interactions, but the game is awesome and the people should be too.

Yes, 2016 has had a lot of awful things happen. Some are going to last for years.

Here’s to a better 2017, one filled with fun and Masterpieces and sweet brews and incredible stories.

One thought on “Resolutions, Past and Future”