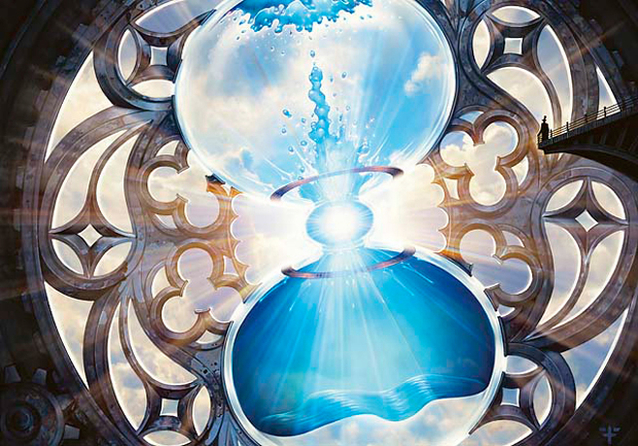 We haven’t even hit Pro Tour Aether Revolt and people are already concerned about this Standard. What do I mean? Well, here’s the top 8 breakdown from SCG Richmond.

From 9th to 32nd, there are 7 decks that aren’t either BG or Saheeli. That gives us 22% of the format that isnt one of those two decks. 78% of the top 32 was one of the two lists. I’m pretty confident in saying that if the Pro Tour doesn’t dramatically change Standard that Felidar Guardian is getting banned five weeks later.

While Saheeli and GB dominated the event, there were still seven decks that weren’t either archetype. Temur Eldrazi ended the day at 14th, looking a lot like the old builds that were popular before Kaladesh and Aetherworks Marvel were unleashed. They’ve got a newcomer in Metallic Mimic, pumping every other creature (and all those scion tokens!) along with mainstays Elder Deep-Fiend, Eldrazi Skyspawner, Matter Reshaper, and Thought-Knot Seer.

Elder Deep-Fiend is the most visually remarkable card in the deck, that is, the one that generates the biggest and splashiest turns. There was a particular sequence sequence where a player’s turn three and four were Saheeli and Nahiri, the Harbinger respectively, while the other player’s were Spell Queller and Elder Deep-Fiend. That’s the guy that won.

I’m a big fan of Thought-Knot Seer too. And while Thought-Knot Seer is arguably a stronger card than Fiend, and more appealing in other decks and formats, the price is easily triple that of Fiend, meaning that in the context of Standard, I hold out more hope the latter.

Fiend isn’t a direct counter to the Saheeli combo in the way that Walking Ballista is, but it’s a powerful threat that doesn’t die to Torrential Gearhulk, is excellent at tapping down an opponent so that you can resolve your own combo, and it plays both in the Temur Eldrazi deck as well as Saheeli sideboards. This coming weekend’s Pro Tour may herald the return of the Fiend, and even if it doesn’t, the seemingly inevitable ban that’s six weeks away as of today will open the door wide for the strategy.

At roughly a $1.50 to $2 buy-in, this is worth keeping tabs on. It’s a strong card that proved itself in the past, and could quickly become a role player in Standard in more than one potential outcome.

Lands aren’t particularly sexy when it comes to Magic speculation, but they tend to be work horses if you’re paying attention. With a consistent rise since the first of the year, Inspiring Vantage is exactly what we should be paying attention to.

Most or all of those Jeskai Saheeli decks were running a full playset of both Vantage and Spirebluff Canal. Even the 4-color lists are running a couple of copies; more than they are Canal. Aside from 50% of the format running it as a full set, you’ve also got WR Humans/Vehicles that want playsets as well.

While Canal is $8 and climbing, Vantage is still sub-$5 retail. WR is well represented in Standard, and as long as the Saheeli combo is legal, it will continue to be so. These are an easy trade at your local store, as they could easily by $7 by this time next week.

Standard may look like a train wreck right now, but out of the top 16 decks of the Modern classic there were only three repeats. That’s pretty good! There also wasn’t any Infect or Dredge. That’s even better!

It was mostly a familiar looking set of decks, with combo, control, and midrange all represented. That level of balance is typically difficult to achieve, and a pleasant change after several months of it being a turn three format. Of course, this is only a single classic, so we’ll see how it goes from here.

Sneaking into 16th place was Mono-Blue Turns, a strategy that relies on playing a mountain of Time Walk effects and killing with awakened lands from Part the Waterveil getting to attack over and over without your opponent having a chance to fire back. This particular list includes a 1-of Baral, Chief of Compliance, which is an interesting include. With a deck that has as many expensive spells as this one, there’s no surprise they’d be interested in cost reduction effects.

Both Part the Waterveil and Temporal Mastery are good choices at this point, though I’m focusing on Mastery because it’s so much older. There’s still more than a page of copies, but that could dry up real fast if people suddenly have a reason to start playing this. So far there hasn’t been a real key enabler of Mastery and the miracle mechanic legal in Modern. If one shows up, expect copies to drain extremely quickly. Supply is moderate to low with very little competitive demand, so adding that into this card’s profile would have a dramatic impact.

If people pick up on this deck, or an enabler is printed, this could jump to $20 or $30 overnight. With nearly five years between us and Avacyn Restored and no likelihood of a reprint on the horizon, what’s out there is all we’re going to have for awhile.