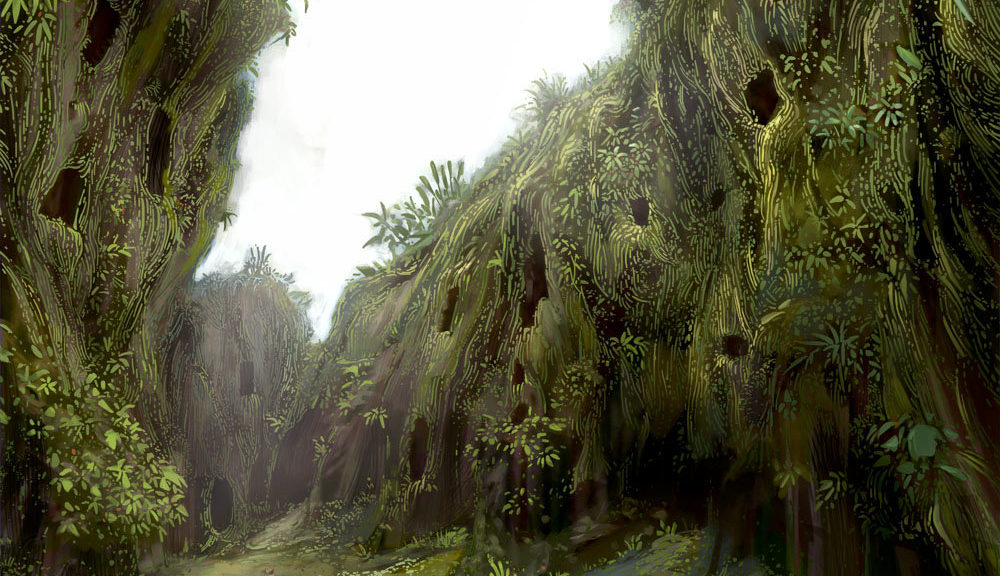 I would apologize for the clickbait title but it clearly worked, didn’t it? You clicked after all and now you’re reading the article. Besides, is there any clickbait title that can rival the irresistability of the phrase “Written by Jason Alt”? I maintain that, no, there is not. The reason for the title and for the departure from my typical format is that I was pitched this idea from management and I liked it enough to write it. I don’t know if we’re going to uncover any hidden gems here, but I do feel like there is value in looking at an albeit subjective list of must-have EDH cards that are getting up there in price (or which are already there, in a few cases).

To determine what I feel are considered “must-have” cards, I’m using a combination of EDHREC analytics and personal experience. I’m trying to make this as objective as possible but there maybe choices you don’t agree with or which you feel have been omitted in error. Feel free to make the case for your picks in the comments.

Some interesting things happened when I tried two different approaches and tried to reconcile them. The first thing I did was search for all of the most expensive cards that see EDH play at all and look at the number of decks they were played in (per EDHREC). EDHREC isn’t a perfect model for adoption but I use it because it’s as good a model as we have, it’s comprehensive and it’s a collection of lists from people who are registering both decks they have and decks they’d like to have. It seems like there would be danger in using a model like that because anyone can just register a $4,000 deck they’ll never afford and never build on TappedOut like a lunatic and if enough people do that, it will throw off the model. However, it’s not like those cards are expensive because a lot of people are pretending they’re in decks they’re not in – the cards are expensive because they’re old, rare and/or people are buying them and playing with them. You might expect the “money is no object!” fake deck crowd to juice the stats on expensive Legends, Arabian Nights and Antiquities cards but the opposite is happening. Players who can’t afford to drop $150 on a Forcefield don’t even seem to be aware it exists, or at least they aren’t making a decklist that EDHREC scrapes that claims they run Forcefield – its $150 price tag might make it a good candidate for this article but it’s in fewer than 250 decks.

Going the other way and looking at cards that were in a ton of decks yielded equally disappointing but less surprising results. Obviously we’re not paying Mana Drain money for Sol Ring because it’s been printed more times than basic Mountain at this point. The trick is finding cards that tick both boxes – they’re expensive but they also get played in a decent number of decks.

First, a few notable cards excluded from the list. 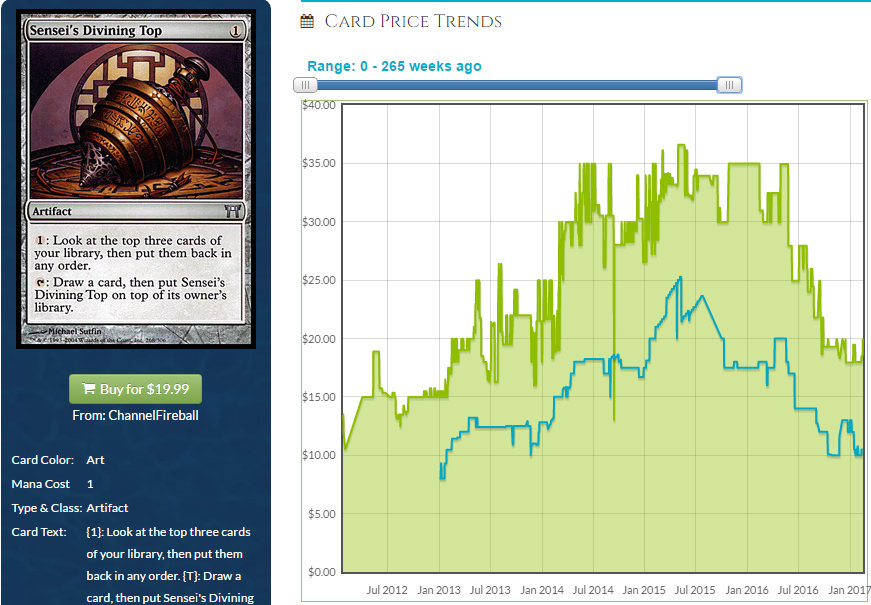 At a whopping 17,563 inclusions, this was included in a ton of decks. However, it was excluded because while it was the most expensive card in more than 10,000 decks, it pales in comparison price-wise to the other cards in the list. It’s surely a must-play card but it’s hardly the most expensive and thus didn’t make the cut. 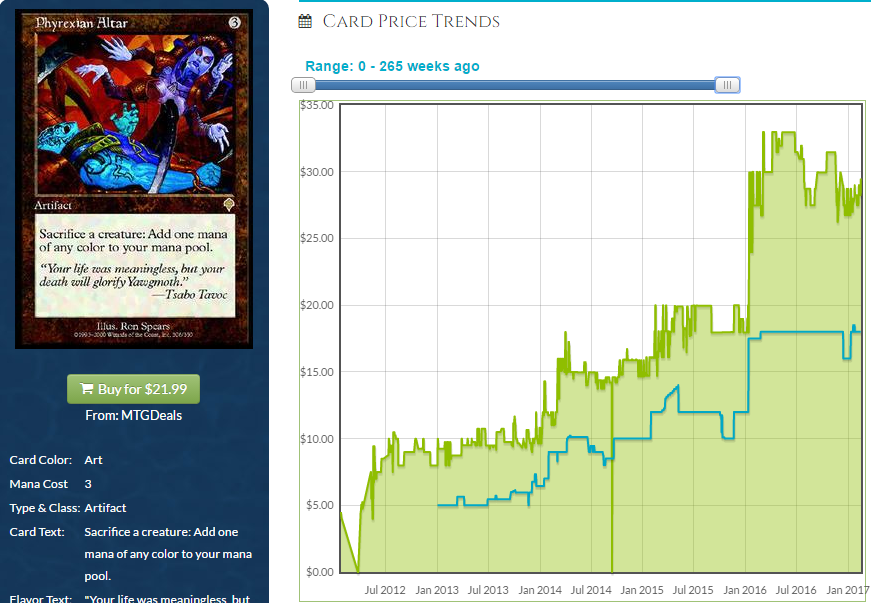 This is a card with a lot of potential and with no reprint last year when it would have done a lot of good, the card surged, gaining 50% of its value in a year. This isn’t in enough decks to crack the list, but it’s in quite a few and it’s going to be expensive enough to be a contender, soon. I really liked this as a pickup around $20 when it wasn’t reprinted in Commander 2015 but I think there is still money to be made here, given their apparent reluctance to give this a reprint. This didn’t make the list but bore mentioning. 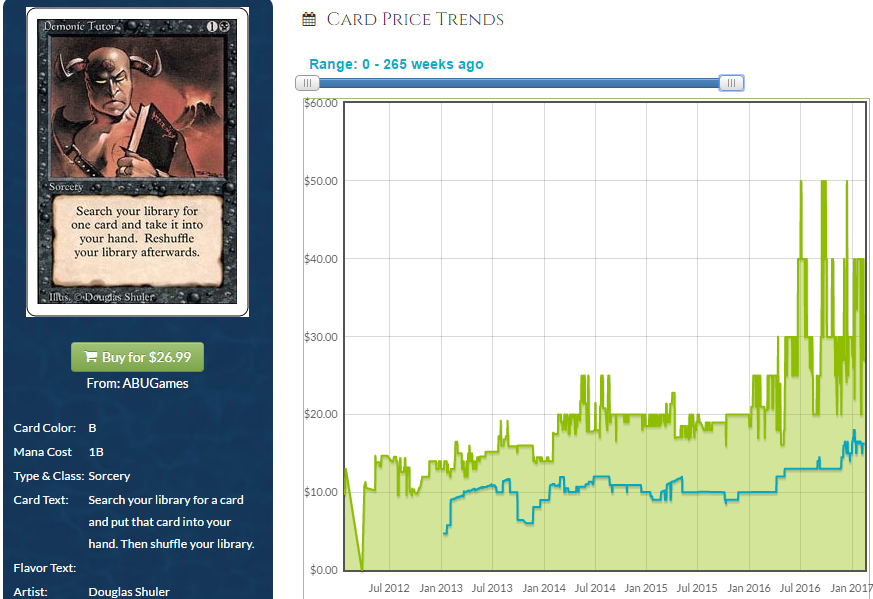 Included in about 20,000 decks, this is the definition of “must-play” but with so many cards worth much more in the $100+ range, I had to cut cards worth less than $40. If I balanced the list to favor inclusion rather than price, this likely would have made the cut. 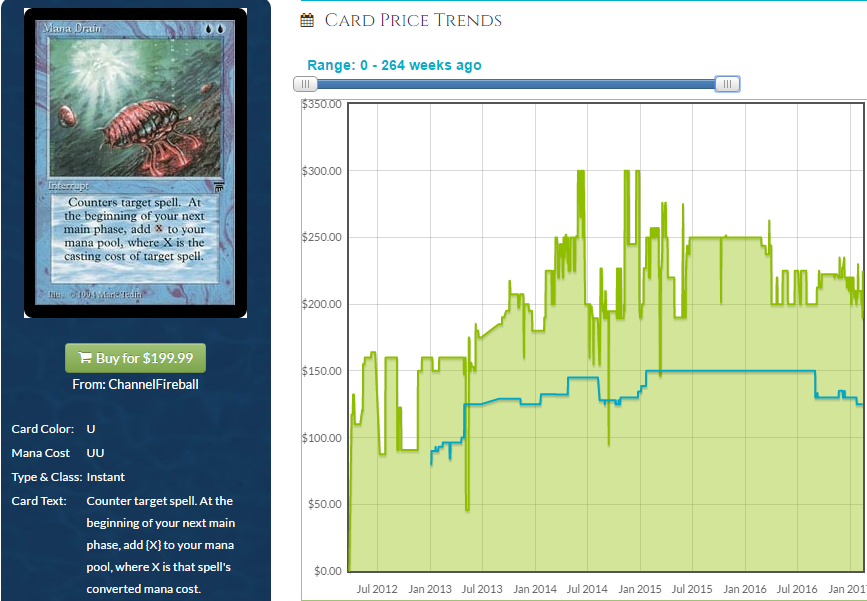 At 2,873 inclusions, this is the lowest-played card on the list and basically established the cut-off for “must-play” cards. If you look at inclusion, you have cards like Sol Ring in 88,000 decks and see a big drop-off right after with cards like Demonic Tutor, Counterspell, Brainstorm, Rhystic Study, Sylvan Library, Swords to Plowshares and Solemn Simulacrum all hovering between 40,000 and 10,000 inclusions. After that there is an even bigger drop-off and if you insist the cards in this list be worth at least $20, you have to include some cards that aren’t in quite as many decks. I think the amount Mana Drain gets played is adequate for our purposes and the price justifies its inclusion, here. 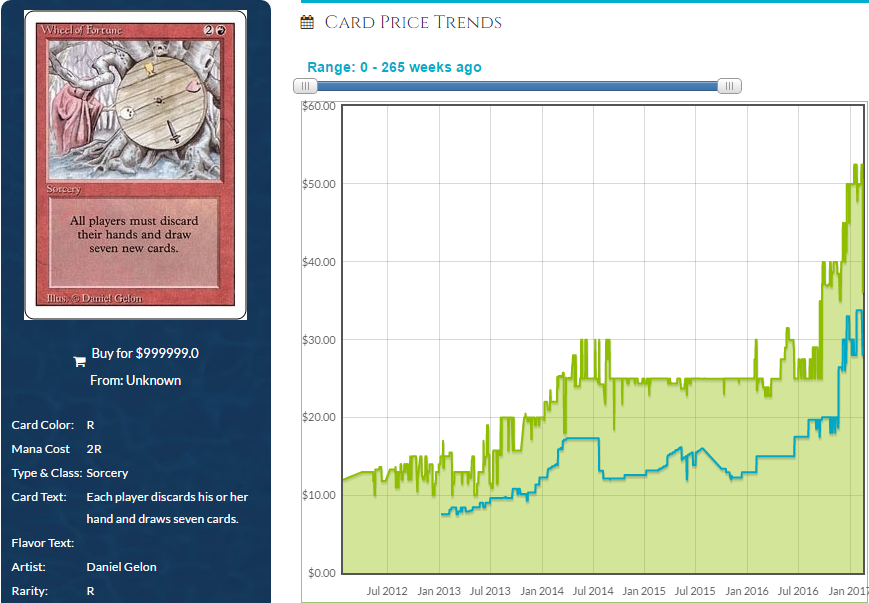 at 4,581 inclusions, and likely growing the more people build Nekusar and Yidris decks, this is an old card with a lot of printings but a lot of demand that has soaked up all of the copies under $50 in most places. Wheel effects are strong and this is the alpha wheel, the one that got us all started.  This is a Reserved List card with a lot of applications and it’s only going to get less and less affordable as more people play EDH and build decks.

#8 Survival of the Fittest 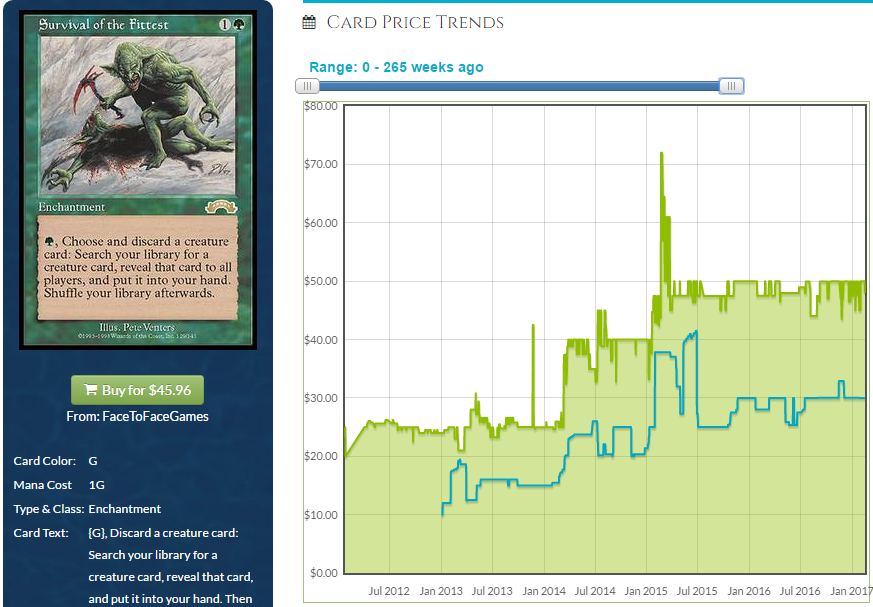 At 3,635 inclusions, this card is no slouch and has a lot of utility in a lot of decks. Legacy gave this price a lot of help and its Reserved List status helped keep the price high as well as its applicability in EDH. A Legacy unbanning would do ridiculous things to this price, but it’s pretty good right where it is, frankly. This card is going to hold its value quite well and is a mainstay in toolbox decks. 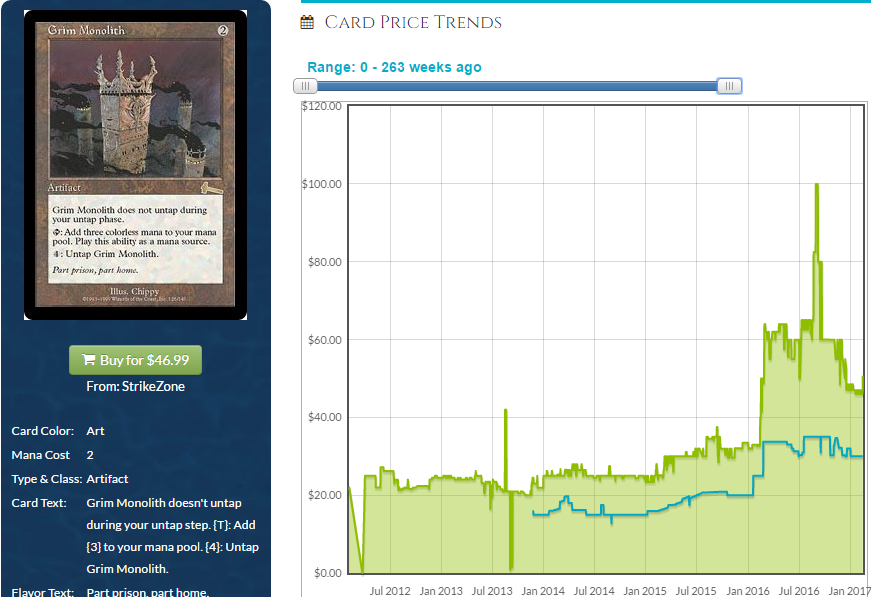 In 3,719 decks and counting, this is an allstar in decks that are greedy and want artifact mana early and don’t care about the consequences later. This is a mana rock that doesn’t deal you any damage (not that we care that much about a point or two of pain in a 40 life format, making Mana Vault much better) and while older formats give the price a boost, EDH still loves to use this card and it shows. 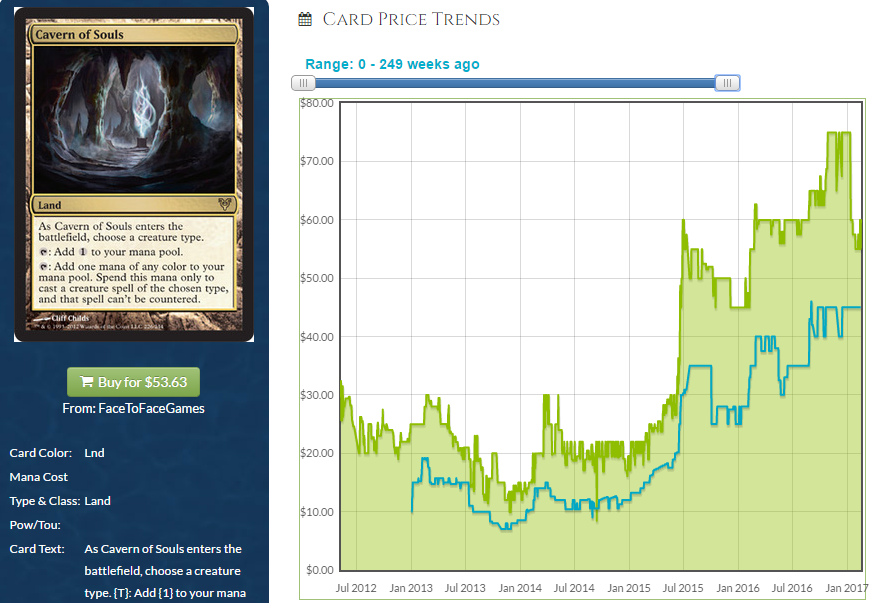 7,984 people jam this tribal favorite in EDH and that has helped the price ascend. If we’re very lucky, we’ll see a Modern Masters 2017 reprinting of this card to get a few more copies into the sweaty mitts of a few more tribal players (Legacy players can fend for themselves). This card might even get jammed more if it were more affordable. I still remember being laughed at for buying these at retail when Avacyn Restored came out because I thought Legacy and EDH could push them to $50. In general, if you bet on tribal cards, you get the last laugh often. 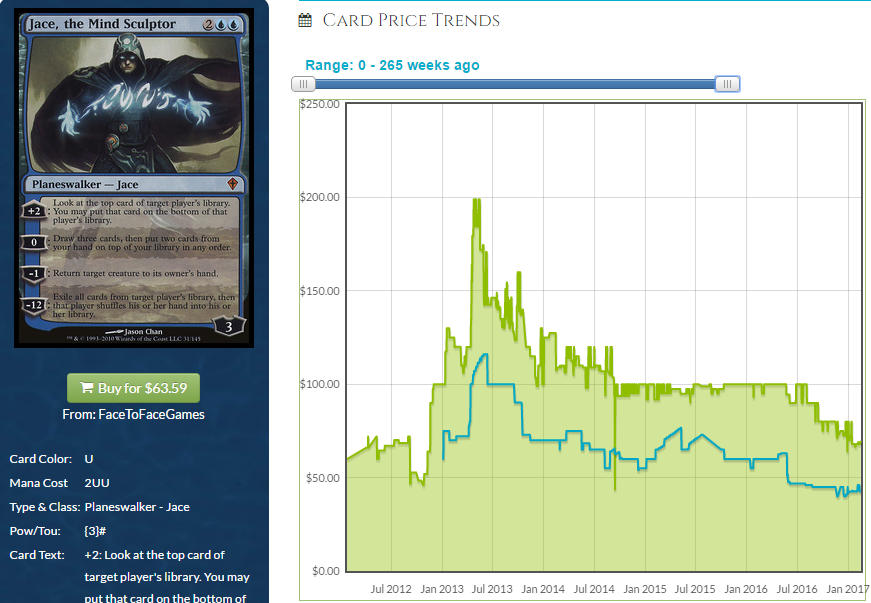 At 4,967 copies, this exceeded my expectations for how much play it would see in EDH. People love the idea of having a card like this in play and straight decking someone out of the game or just smoothing out every draw with the option of bouncing a troublesome creature. Even the Brainstorm function is useful, putting lots of counters on Lorescale Coatl or making Thought Reflection really good. Jace is this expensive with a Modern banning, so imagine what an unbanning could do to his price. The result is likely that it prices Jace out of a lot of EDH decks, which would be too bad. 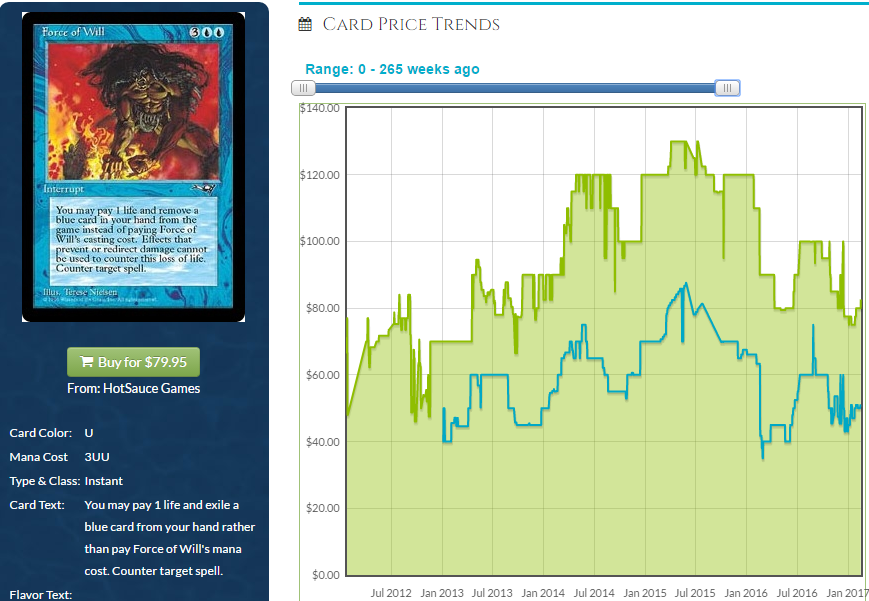 There sure are a lot of blue cards on this list. 4,696 players agree with the assessment that blue is one of the best or the best color in EDH by jamming this clunky, 5 mana spell that is card disadvantage. At least the art is cool, I guess. In all seriousness, some decks can’t sit back and watch their opponent play a turn 3 Kozilek and they have to have something to say about it because that’s what blue players do. This card is one of the most iconic Magic cards ever and it’s not going to go away. Be prepared to be blown out by this card that, despite its high price, is still an EDH windmill auto-include for a lot of people. 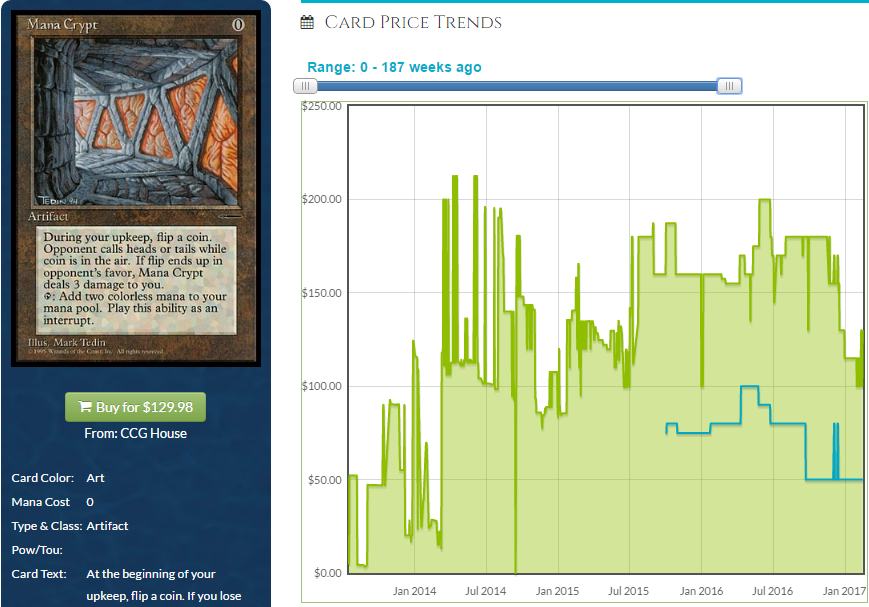 I can’t say I consider this card 100% necessary, but 8,896 deck builders disagree, opting to jam this in their list. And why not? This is better than Sol Ring on turn 1 and competitive players are all about good turn 1 plays and they’re also fine spending the money to win. You can’t say they aren’t real EDH players and if they’re voting with their wallets to play with this card, we should pay attention. Eternal Masters and Masterpieces  got more copies in more players’ hands and that is a good thing. If we see this printed some more, I think the price can withstand the extra supply because the demand is quite high. There’s a reason this was so close to the top spot. 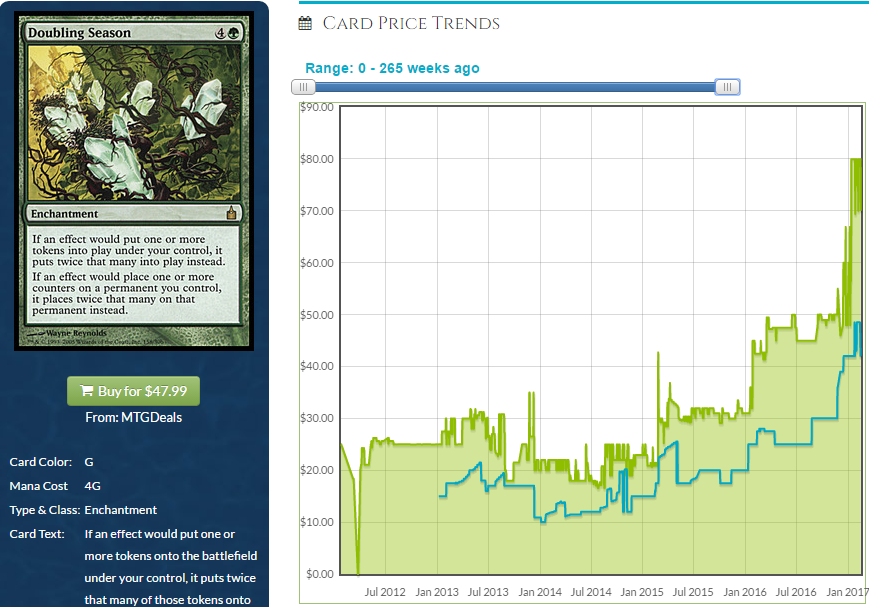 This used to be a bulk rare, as hard as that is to believe. EDH is the bulk rare format and the only problem with that is that players don’t tend to let things stay a bulk rare if they really want them. This is perhaps the card that best encapsulates what EDH is all about. It’s expensive, powerful, a good build-around and it was a stupid green bulk rare before this format came along. Casual players took notice before EDH was even official and the price began to creep up. This shook off a Modern Masters reprinting and really got nutty when Atraxa came along and captured the imagination of every EDH player on earth, though I’d argue if you build Atraxa you probably didn’t have much of one to begin with. This is good in nearly every deck that runs green because it’s bound to help you do something you’re doing twice as well. This card IS EDH as far as I’m concerned. 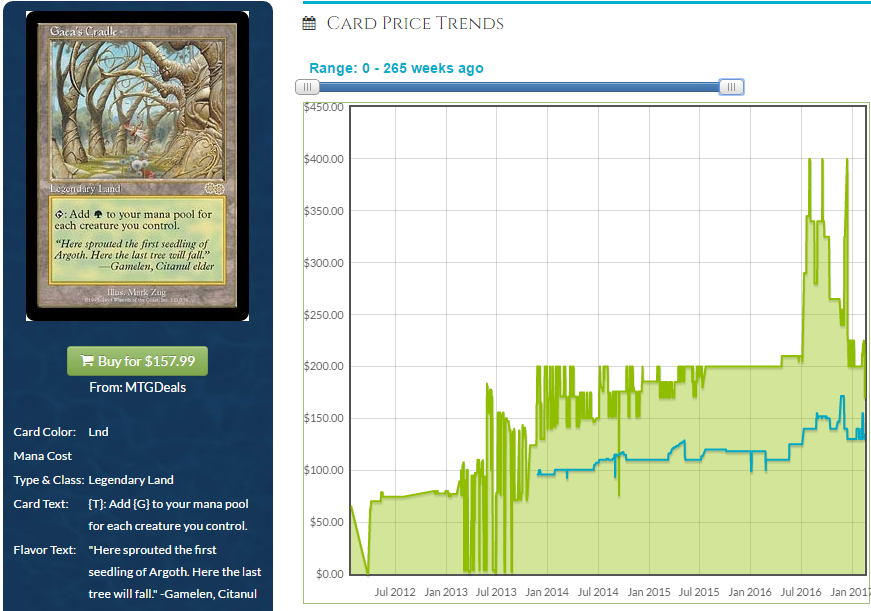 I was hesitant to rank the cards but even when I didn’t want to, I knew I wanted this card to be #1. This is pure EDH – rewarding you for filling up the board. While this is useful in Legacy to the extent that its largest price increase was predicated on the Legend rule change (and justified cum eo by its Reserved List status) this is still an EDH staple and gets jammed in lots of decks that go wide. It creates a feedback loop with cards that let you pay mana to put out creature tokens and casual players and competitive players alike have sworn by this card for over a decade.

I’m looking forward to all the comments on reddit saying “This lst iz trash he didnt even enclude ne white cardz this site sucks anywayz” and some more constructive comments in the comments section below. I really wrestled with these rankings and even with the 10 cards I included. How do you really objectively decide something like that? Do you weight it in favor or how expensive they are or how much they’re played? Is it fair to leave off cards in 10 times as many decks as some on this list just because they’re under $20? It’s hard to know. I’m happy with how this turned out and I got a few surprises looking through all of the data. I hope you found this valuable and if not, I’ll be back to my old tricks next week. We might even have some Modern Masters spoilers to look at. Until next time!

3 thoughts on “The 10 Most Expensive EDH Staples”