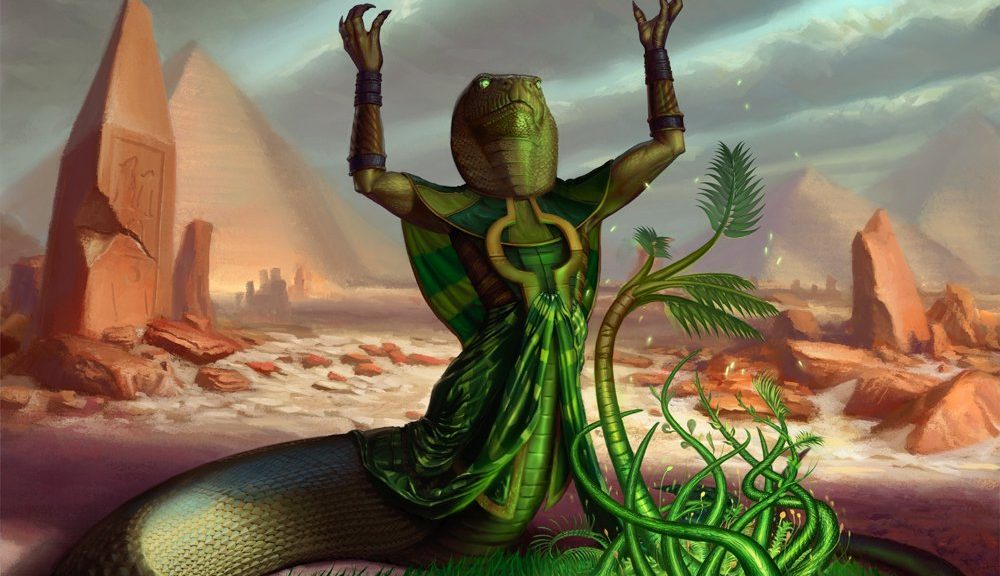 Hello and welcome to the new world of super-cheap cards that aren’t worth the cost of packs or boxes!

Well, that was at the beginning of this week, anyway. Not a lot has changed, either, but there are some cards that have changed price in surprising ways over the past few days, and I want to look at what’s happening.

A note: I’m not always sure why a card is moving, as we don’t have any tournament data to look at yet. We have a very small amount of 5-0 results from Magic Online, but the saga of Wizards and data suppression is its own lengthy article.

Still, price movements online and in paper can tell us some things, and I always like a clue on the first weekend.

The Scarab God ($15 now, up from $9 this week): Can we take a minute and reflect on how silly it is that no one bothered to give these Gods names? Is that part of the appeal or something? A testament to the power of the Moriarty-Dragon? It’s irksome to me, but I’m old and a curmudgeon.

The card has crept up about 50% this week probably because it’s a brutal EDH card and it doesn’t take much to have this be a game-defining effect. The ‘each opponent’ clause is pretty darn fantastic, and having a relevant graveyard ability is important in Commander as well. I think this price bump is not here to stay, as people will get their copies and the price will trickle back downwards.

Neheb, the Eternal ($4.50 now, was $2.50 this week): I cannot imagine a world where people are playing this over Glorybringer in Standard. Same mana cost, but one is far more impactful immediately than the other. I suspect this bump is due to the casual market as well, I’ve seen people trading for it at this price, and I’m staying away. Show me the combo in Standard, I know it’s capable of dumb things in Commander.

Razaketh, the Foulblooded ($6 now, was $10 a week ago): First off, the foil multiplier is nearing four on this card, so you can imagine it’s tearing up Commander games. I haven’t seen it in action myself, but it seems pretty degenerate and worst of all, it’s lots of tutoring and can be done at instant speed. I was really in on Griselbrand when it was printed, and that banning took a whole cycle to happen. If Razaketh survives the first banlist update from the EDH Rules Committee, then I’ll be listening, but for now, I’m staying away.

I don’t want to hear about reanimator decks playing this in Modern or Legacy either. The requirement of an additional creature just costs too much when you’re playing this on turn one. Griselbrand gets your seven back immediately.

Bontu’s Last Reckoning ($4.50 now, was $3 last week): Is this worth it? There is not a comparable card to look at, oddly, but I’m cautious. I suspect this is going to be a card that gets more play than we are first expecting…for the first couple of weeks. People are testing this card, and the price is going up. Usually that means it’s going to get played this first weekend, so I’ll be keeping track of events to see if it’s pulling its weight.

Fraying Sanity ($2 now, was less than a buck a week ago): You’ve heard it from a million writers: casual players love their mill cards. The list is long yet not consistent, though. Sure, Consuming Aberration is $2, but Mirko Vosk, Mind Drinker is still $1. I would be dumping Fraying Sanity at $2 right now, in trade or in what you can get in cash.

That’s my plan for right now. I’m expecting this card to drop like a rock, it ought to be fifty cents or less in a month. I don’t think the foils will ever drop below $5, though, and that’s where I would prefer to be. I get it that the effects stack, and the second is quad damage…but I can’t deny this:

Sometime in the next 18 months (this set rotates out in September 2018) there will be a mill deck featured someplace and this card will spike. I would plan on selling into that hype.

Hour of Devastation ($8 now, was $3 a week ago): This is the card that I first thought of. We already have some pretty good UR decks, and now those decks get a sweeper that can even deal with planeswalkers! This is going to make a big impact early and alongside Abrade, makes UR able to deal with the vehicle/walker cards that are usually so resilient to wrath effects.

I think this isn’t done going up. It’s going to break $10, and might even get close to $15 in the early hype. It won’t stay there, as this is too mana-intensive to be a four-of in the decks that want it, I’m expecting it to be a defining card of the format for some time, though. I’ll say that this stabilizes at a solid $10.

Ramunap Excavator (Now $7, was $4): Being the release weekend promo means that there will be more foil copies out there, but this card is just amazing in a format with fetchlands. I’m not sold that it’s Legacy-worthy, but I can see the appeal. Playing this alongside Wasteland is a repeated kick in the teeth. Yes, it’s amazing with Glacial Chasm too.

The thing is, though, I have a hard time believing that all the cards in this set are super-low-priced. Most cards are trending down, as they should, but it’s clear that the Excavator is getting enough value to invite purchases. I just can’t justify buying a promo rare at this price. I would be shocked if it bumped to $10, because it would have to start trending down from there.

Cliff is an avid Cuber and Draft enthusiast. He believes in keeping one, maybe two playmats max and tends to enjoy the side events more than the main attraction at a GP. Ever since getting his first Revised packs in 1994, he’s sold cards for a new transmission, a sweet bed, and even the security deposit when moving into a new place. Find him on Twitter @wordofcommander or Fridays here at MTGPrice.