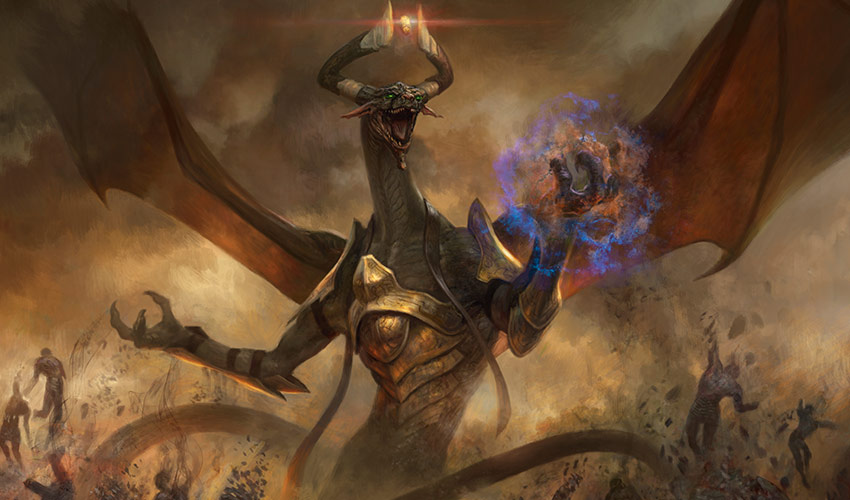 Eldrazi may have won the SCG Open in Syracuse (sorry I didn’t make it even though I tweeted that I would), but the far cooler deck was one that didn’t T25. It did get an early deck tech though, which was enough to spur interest in a dusty Rise of the Eldrazi mythic. Vengevine returned alongside Hollow One, which makes for an agreeable synergy. You use spells like Faithless Looting and Cathartic Reunion to dump Vengines (and Bloodghasts) into your graveyard, a process which makes those Hollow Ones free, so you cast them for no mana, which brings back the Vengevines. Then it’s into the red zone with you.

It’s a cool concept, and there’s possibly room for growth there. I find myself wondering if the deck wants Reforge the Soul or something like that. I also am guessing that we played far too few Street Wraiths in Modern before Death’s Shadow finally figured out that that’s a good card. Perhaps it’s because Gitaxian Probe is gone.

Standard looked more varied, although I suspect that it’s less that the format is all that balanced and more that many players didn’t feel like playing what’s inarguably the best deck in the room. There weren’t any impressive breakout strategies, but there was one card that caught my eye.

Sword of Feast and Famine

Commander 2017 spoilers start today, and at the time of writing, we’ve seen two cards sneak out of Europe. One is from the cat deck, and makes clear that there’s an equipment sub-theme to be found within. No surprises here; most of us figured that was in the pipes. It’s why several weeks ago I talked about Raksha Golden Cub. Cats typically lean on equipment to beef up their combat prowess, and this set will be no different.

Lightning Greaves, Swiftfoot Boots, and Skullclamp have long been and will continue to be the most popular equipment. They’re also impossible to make money on if you’re a spec & flip kind of guy. While they’re solid gold for guys with cases in their local store, those of us looking to do some speccing can’t get enough out of the margins to make it worth it. That means we’ve got to look a little deeper.

Masterpieces Sword of Feast and Famine was just bought out. I don’t believe this is in response to the Cat deck, although perhaps. Most impressively, they’re selling through at the new price of ~$140. There’s real demand here, and we could see that manifest in the cheaper copies as well. MM2 and MED copies are around in the $20 range, and while there’s a supply, it’s not massive. If a hundred people who pick up cat decks decide they want a Feast or Famine, that will drain nearly all of the TCG inventory. If I told you that Sword of Feast and Famine was a $40 card, would you be surprised? I doubt it, and I think that’s why this is on its way there.

Death and Taxes is a bad deck, regardless of what variation or format you’re playing. It’s a bad deck full of bad cards for bad people. Bad people like you, who keep playing and buying bad cards.

And yet, the deck still sells cards. In fact, Thalia, Guardian of Thraben has climbed to an impressive $12. It’s taken a lot longer than I thought it would have back when I was scooping them up during Dark Ascension. She’s finally arrived though, and almost entirely on the back of Death and Taxes. It also so happens that in virtually every deck Thalia is part of, Leonin Arbiter is part of. I’m sure there are lists out there that include Thalia and not Leonin Arbiter, but man, they are few and far between.

With Arbiter sitting at $5 and no second printing, nor a particularly deep well on TCG Player, he’s sitting pretty to hit double digits this year. A steady demand from D&T players over the years has sapped excessive supply out of the market too, so when this finally does pop, there isn’t going to be nearly the rush of copies available as there would be on a heretofore unknown bulk rare.

Did you know this card was this cheap these days? I didn’t realize. I thought it was still around $10, which would still be too cheap. What the heck? How is this reasonable? This card breaks open matches every single time it resolves. Abrade may have been printed, but just put the counters on a non-artifact creature and they’re still in for a world of hurt.

What’s most shocking to me about Verdurous Gearhulk is that Torrential Gearhulk, a card that sees considerably less play at the moment, is easily three times the price. What? Did these people not watch the same Pro Tour I did? You wouldn’t even know blue was a color of Magic had you watched Pro Tour Hour of Devastation. At the same time, Verdurous has been a staple of BG Constrictor for months, and made top 8 in Kyoto a few weeks ago, as well as the finals of GP Minnesota just a few days ago.

At $4, I’m in. What are the odds this isn’t a key mythic for green decks this October?