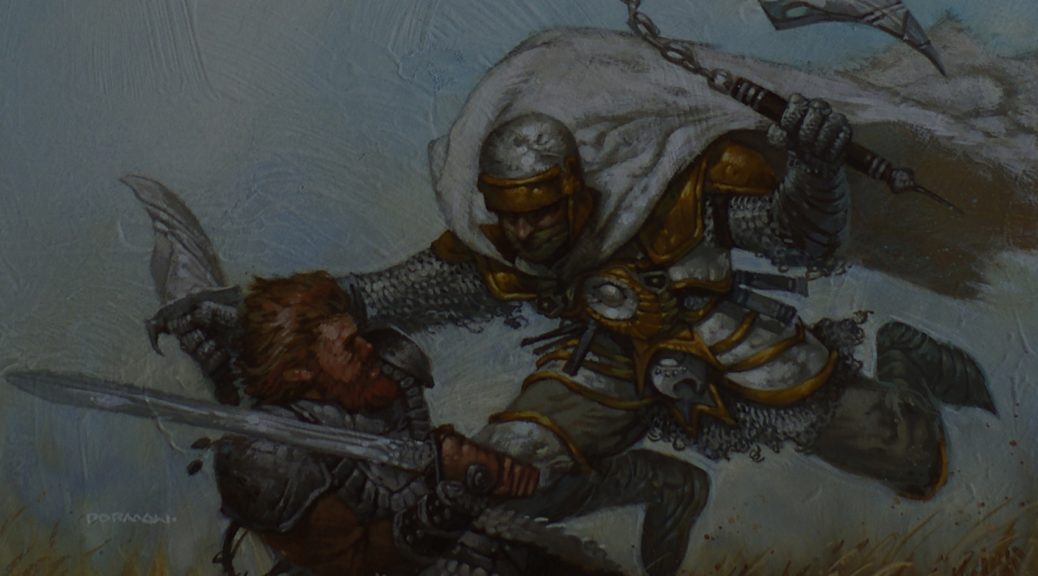 Since we last spoke there were four(!) Modern events; two Grand Prix, an SCG Open, and an SCG Classic, as well as the full Commander 2017 spoiler. Such action! Such excitement!

I’m touched on a card today that jumped out at me across all four Modern events, although I’m sure if you took the time to dig closely  you could find other appealing targets. Modern is a diverse and rich format right now, which is obviously excellent for players. It’s a little stickier for us, as there’s nothing dominating — and thus earning an outsized price tag — but it does keep the doors open to unknown decks spiking an event and spiking a price.

Meanwhile the Commander set this year is reasonably linear, which makes finding the specs much easier, and there are several key omissions. My favorite is Cryptic Gateway, which has no reason not to find a home in every single tribal deck ever built, and is especially powerful with the new Mirri. Wizards has also sparked a lot of interest in the financial sector, but overall, all four are appealing to many players, and there’s no arguing that C17 is one of the best-designed sets we’ve seen from Wizards in awhile.

Champion of the Parish

Both a Grand Prix and the (admittedly smaller) SCG Classic both found themselves with a humans in deck in their top eight, and each contained a playset of Champion. They weren’t even the same deck, as one featured the Knight of the Reliquary/Retreat to Coralhelm combo, and the other one eschewed it for a more direct “I’m going to shove creatures down your throat until one of us is dead” strategy.

Many useful creatures in Modern happen to be humans. Thalia, Noble Hierarch, Eternal Witness, and Knight of the Reliquary are all the same tribe, and they’re all cards you’re happy to play regardless of that vector. Once you’ve already got a pile of humans, it’s not a leap to add in one or two humans-matter cards to turn up the pressure. Champion of the Parish is one of the best of the bunch in that regards, with a copy on turn one representing a serious threat through the entire game. It rapidly grows out of Lightning Bolt range, and while it’s always vulnerable to Fatal Push and Path to Exile, that’s hardly enough of a reason to not bother at all.

At the moment you can find copies in the $3 range. There’s a fair bit, but it’s been a long time since it was printed, and humans seem to be ever so slowly growing in popularity in the format. Bant Knightfall continues to put up results every now and then, and the latest printing of Thalia seems to have encouraged more tribal strategies as well. So long as Humans continues to see success on the larger stage, I’d expect the price on Champion to begin moving north.

It’s worth pointing out that foil copies are also appealing, with seemingly far less supply and an attractive multiplier.

Patron Wizard may have been the buy-out target after last week’s Commander 2017 lists were released in full, but Riptide Director is the card I’m more interested in. When there’s a new commander that just straight up domes people for seven when you tap a bunch of wizards, there’s clearly an existing appeal to put as many of them into play as possible. Director is going to make sure you keep the fuel up by just being a Concentrate – or easily better – every turn.

What’s especially appealing about Riptide Director is that it doesn’t feel like people have quite caught on yet. I’m sort of shocked prices are still below $1, actually. After all, there are two banner “wizards matter” cards – Patron, and Director. Patron Wizard’s market price is $10, Director’s is $.89.

Continued insistence on my part isn’t going to help much, so I’ll wrap it up. Four mana, draw a bunch of cards, do it every turn, $.75. Where’s the hesitation here?

A subset of dragon support cards exist that are in virtually every dragon deck. Dragonspeaker Shaman. Dragonlord’s Servant. Crucible of Fire. There is, however, one that seems to have gone mostly unnoticed. I’m speaking of Krosan Drover.

Even to me this is an unknown card. I’m sure I’ve seen it before — like, laid eyes upon a piece of cardboard with this printed on it — but I didn’t at all remember that it exists. Which is surprising, because I played a lot of Magic during the Onslaught block. It makes basically all your dragons cost two less, which is a huge boon with such expensive creatures, and makes it a lot easier to pump out two in a turn.

Nonfoil copies are a trap; there are far too many out there, and far too many that could be added if there were reason. Foils from this block are increasingly rare though, and these are no different. What’s especially appealing here is that even if they are reprinted (and we have no reason to believe they would be, especially given that they list a specific Magic location), the old border foils will retain their appeal. With a price tag of a whopping $.50 per copy, if you can score several at a time they strike me as particularly appealing.