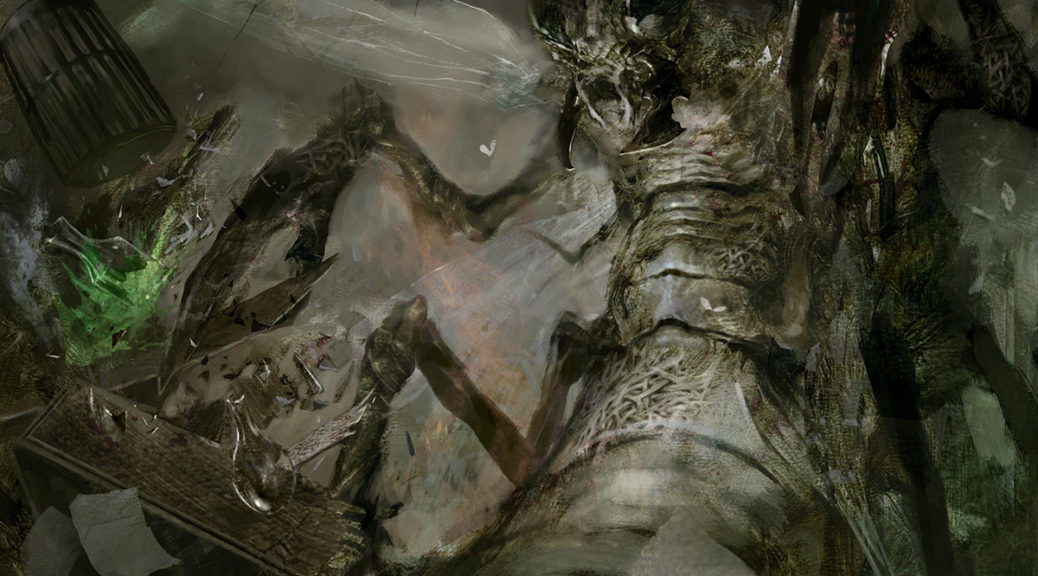 Ixalan is going to be awesome, and while we are getting previews at a relatively glacial rate, there’s a few super-unique cards that I’m staring at and thinking about: the transforming lands.

I’m not thinking about if I should buy them (yes, totally in foil especially!) but I’m keeping an eye on something that’s two months out: From the Vault: Transform.

Today, I’m going to go over a few cards that have changed in price, and some that haven’t, to see if they need to be sold right the heck now, or if they are safe to pick up.

I hate making predictions about what Wizards will do, but there’s something else to note: We’ve been told in the past that transform cards are hard to add to a pack randomly, but if they want to they can. We’ve had Magic Origins, with a mythic cycle of transform cards, and now we are getting ten rare ones in Ixalan. (This number could be wrong, we don’t have the full set as of this writing.)

I want to explain my fear, with some illustrations. Being printed in an FTV: is bad for the long-term price of a card. Some cards do recover over time, but the pack foil generally takes a hit and trends downward. Let’s look at some examples. 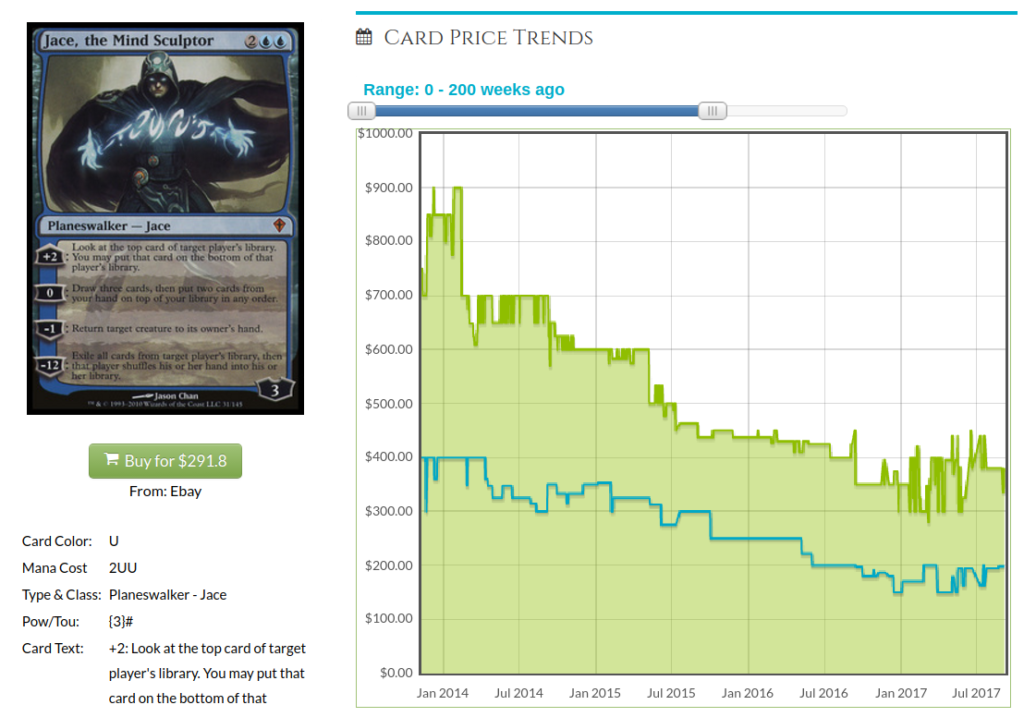 Before being printed in FTV: 20 in August of 2013, pack foil Jace, the Mind Sculptor was more than a grand. I would have thought that this price would hold firm, given that the pool of people who want a foil Jace is relatively small…but there’s the chart. There was a minor bump after, as people thought the price was falling too far, but the downward trend was beginning. Eternal Masters in June 2016 gave this price another hit, but the FTV did a lot of the damage. 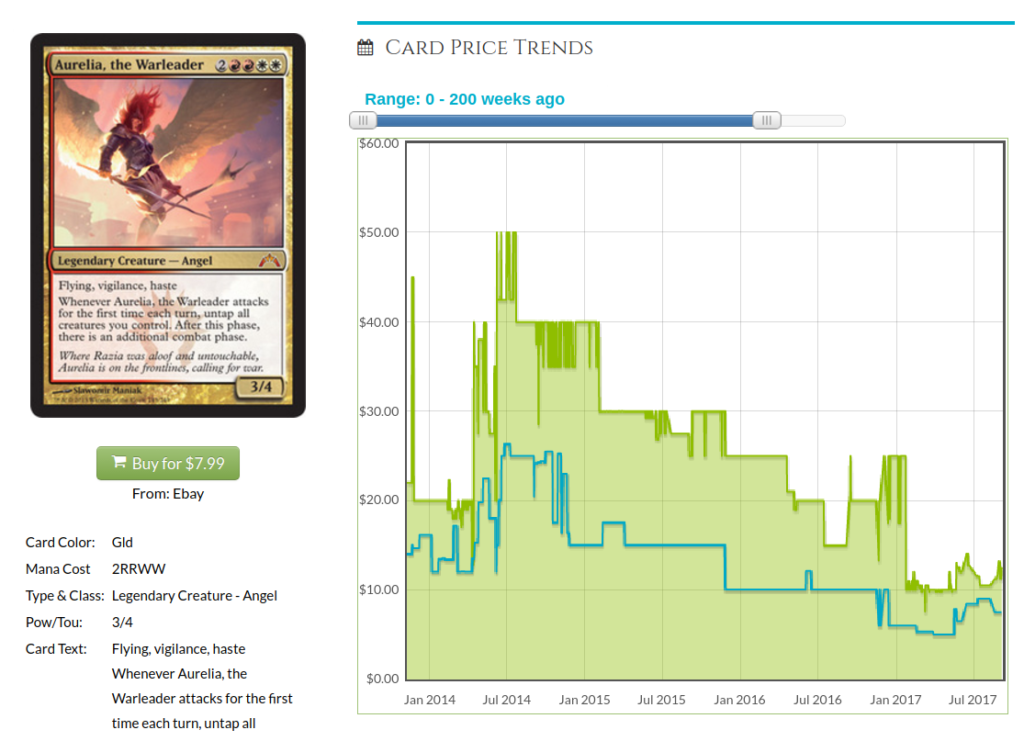 Aurelia, the Warleader, is a powerhouse in Boros Commander decks. You’d have to work hard to convince me to run someone else as the commander. She was in FTV: Angels, and that was the beginning of a downward trend that has continued for the pack foil. The FTV release for her was August 2015, and it took a couple of months for the decreased demand to set in, but you see how the buylist price dropped in November of that year.

Now, onto some new prices for old cards.

Bloodline Keeper ($14, up from $6) – This is the card that inspired me to write this article. If you need a copy for your new Vampire deck, understand that this is very very likely to be in the FTV that’s on the way, and it’ll cost you $5 or less. I would be selling every copy of this that I had, and I’d be giving serious thought to selling copies in decks now, and rebuying it after the FTV lands. If you have to have it right now, do so with the knowledge that you’re paying for the immediacy.

Jace, Vryn’s Prodigy ($24 now) – If he’s reprinted in this set, then I’d expect the nonfoil to take a bigger hit. ‘Infant Jace’ already has a promo from SDCC to be an upper-limit to the foil versions, so I don’t think those would lose value at all.

Nissa, Vastwood Seer ($7) – I’m not sure that this will get reprinted, but it’d drop by at least half if it did. However, if she dodges the reprint, I really like her as a long-term hold.

Garruk Relentless ($6) – He feels like a lock, and this is going to hit his price hard. There’s two transforming Planeswalkers, and Arilinn was very recent. I’d be surprised if his price stayed over $3.

Archangel Avacyn – ($6/$20) – Her price has been falling for the duration of her time in Standard, and I don’t think rotation would have lowered her price much more. I would expect the FTV version of her to end up about $8, and the original nonfoil about $4.

Westvale Abbey ($6/$9) – As a transform land, it’s one of a kind, and rotation is going to hit this card like a hammer. This will be $3 without the FTV, and might push down to $2 if it’s in this special set.

Startled Awake ($4/$8) – This has come down from the crazy height Fraying Sanity pushed it to, but it’s a unique effect that casual players love. I’m hoping some version of this can be picked up in the $2 range, and that’s a great price point for buying in.

Thing in the Ice ($4/$10) – Being a fun one-of in some Modern and Legacy sideboards is just barely enough to keep this price solid past rotation, but if it’s in the FTV, expect that value to drop by half.

Elbrus, the Binding Blade ($4/$12) – Sorry, big guy, but your price is completely a factor of your scarcity. It’s even possible that there will be more copies of you as an FTV card than there were of originals, considering that Dark Ascension was early 2012.

Duskwatch Recruiter ($1/$6) – Being in the FTV won’t make a dent in the pack foil, though the original might go down to fifty cents. It’s a bonkers card in heavy creature decks, and an outlet for infinite mana from Devoted Druid and Vizier of Remedies.

Mayor of Avabruck ($2.50/$6/$3 release promo) – There’s already a special version of this card, but I put nothing past Wizards at this point. Oddly, I doubt being in the FTV Would the price of any of these much. It’s a four-of in the niche Humans decks that pop up in Modern from time to time, too, and it’s funny that you rarely want this card to flip.

Bruna, the Fading Light ($1/$8) and Gisela, the Broken Blade ($7/$17) – I expect there will be a Meld pairing in the set, and these are cheap enough to merit inclusion. Plus they are thematic and awesome. I think it’s more likely that Wizards goes cheap and gives us Hanweir, the Writhing Township or Chittering Host. At that point, I will like these ladies as a long-term buy and hold.

Delver of Secrets ($1.50/$9), Perfected Form ($0.25/$0.50), and Docent of Perfection ($.50/$6) – I think this an excellent inclusion in the FTV, due to the flavor text and the amazing Nils Hamm art. It’s also a pair of Wizards, including Docent which is just amazing when put into the Wizards deck that they just happened to start selling last week. Delver wouldn’t flinch in price at all, and I’m not sure about Docent. There’s a tiny number of foils for sale, and much is going to depend on the demand going forward. The assorted Wizards are popular commanders out of the gate, so these seem like a good idea, but the price might not pick up for a couple of years.

Bonus section! My picks for the set, with the caveat that I’ve been super terrible at predicting what WotC will do.