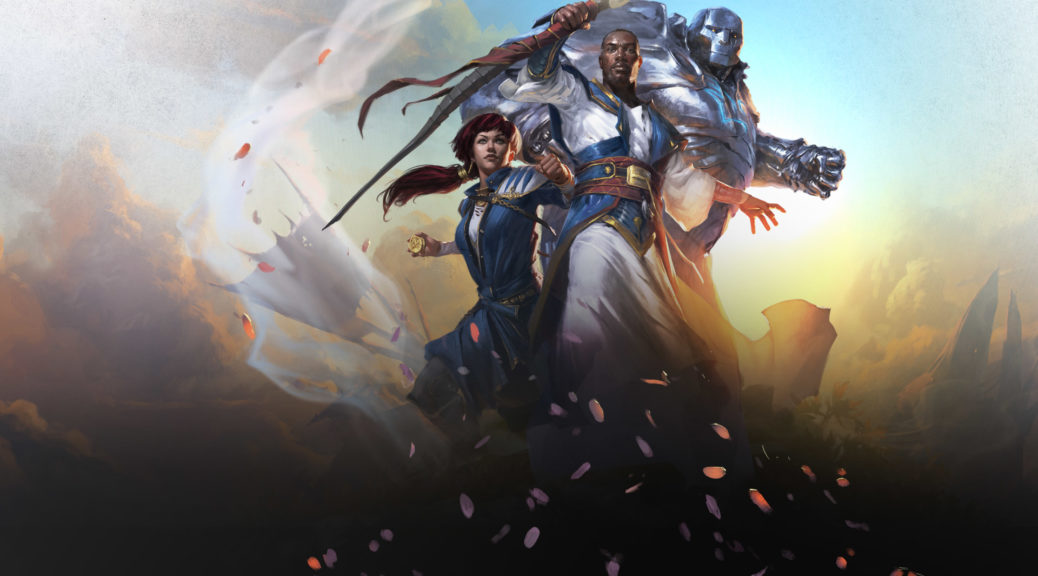 Pro Tour Dominaria, the second Pro Tour of 2018 got rolling this morning in Richmond, VA, USA.

As per usual the world’s best players have been holed up in east coast hotels and rented homes for the last week or two, all seeking to answer the only query that matters: is there a fresh deck or reconfiguration of existing archetypes out there that will allow them to catch the field off balance while offering consistent play against the known quantities in the field?

Six weeks after the release of the ultra-popular Dominaria set, we find ourselves well entrenched in one of the better Standard formats in recent memory.  With a relative dearth of major Standard tournaments over the last few weeks due to significant Modern and Team Trios representation, our hard data on the best decks of paper Standard is more scarce than usual. Perhaps the most relevant recent result can be drawn from the Standard decks of the Team Trios results from GP Toronto, two weeks ago, where the following decks made Top 4:

Entering into this weekend, the online meta would suggest that the top decks sync up with what we saw at the recent IRL team tourneys:

By any standard that is a fairly diverse and healthy looking field.

It is worth noting that the Pro Tour currently requires that players succeed in a mixed schedule of booster draft (DOM/DOM/DOM) and constructed play with 3 rounds of draft this morning at 9am , followed by 5 rounds of Standard starting around 1pm EST/11am PST, Friday.

For we finance types, this is going to be a tricky tournament to make or save money on, given the various factors in play. Firstly, Dominaria’s popularity has resulted in demand exceeding supply on the first wave or product allocations. As a result, heading into this weekend, we still have five mythic rares from the set commanding prices over $10, including Karn, Scion of Urza, Teferi, Hero of Dominaria, Lyra Dawnbringer, History of Benalia and Mox Amber. Of the rares, the most relevant thus far is Goblin Chainwhirler, a consistent four-of in the red decks that is holding $5 at present. On the other hand, additional supply is now making it’s way into the supply chain, and we’re also heading into the summer season that typically leads to a general collapse in card prices, especially for Standard staples, and even more so if they are rotating in the fall. As a result, our focus is likely to be most productive when used to identify the cards that may be set up to spike after the major fall rotation and that we may be able to get on discount during a summer vendor sale or Ebay coupon day.

Initially widely underestimated, the new Karn with pants immediately started putting up results in multiple formats as soon as he was released on the unsuspecting Magic population. In Modern, Frank Karsten has been advocating Karn, Scion of Urza as a 2-of in Affinity lists, and we’ve also seen the big metal planeswalker show up in Legacy Mono-Red Prison, Eldrazi and Affinity/Prison hybrid lists where the presence of City of Traitors and Ancient Tomb make Turn 2 Karn a real possibility. In Standard, Karn is in the top 10 most played cards in the format, most prominently appearing in WB Vehicles decks as a 3-of. UB Mid-Range & RB Aggro decks also have been spotted running Karn, though not as consistently. Generally speaking I am most interested in Russian or Korean foils as close to $250 as possible, since they are highly unlikely to see a reprint in the next five years, and should enjoy some strong multi-format support rolling forward that pushes rare original printings sky high. If you have been looking to acquire your personal play set, your position is uncertain. In theory, summer doldrums and additional Dominaria supply should lead to downward price pressure, potentially opening up access to sub $40 copies. On the other hand, a dominant showing this weekend might encourage even more players to pile onto the card speculatively, which would open up a chance for the card to top $60 in the short term. Net, net, I’d recommend holding off for the summer sale season.

Oddly enough, we have not one but two planeswalkers from Dominaria showing early signs of multi-format utility. During spoiler season, players also widely underestimated Teferi but just a month later pro players are now wondering aloud whether the classic character is actually better than the recently unbanned Jace, the Mind Sculptor in blue-based Modern control shells. In EDH, the interaction with Doubling Season in Atraxa super-friends decks will set up a solid support base for the card longer term even if he won’t see the kind of Legacy/Vintage play that Karn does. In Standard, Teferi is only really showing up in the U/W control builds, where it is a rock solid 4-of. As such, price movement over the weekend on Teferi is likely to hinge on that archetype making waves in the Top 8 and winning the tournament without triggering any serious calls for a banning. That’s a narrow tightrope to walk for short term gains, so as with Karn, I am more interested in targeting rare foils and personal playsets of non-foils a bit later this summer.

Goblin Chainwhirler is a hyper efficient aggro card, presenting a significant body, dueling prowess via first strike and the ability to needle the final point of damage against your opponent or pressure Karn or Teferi from outside the red zone. That being said, it’s pretty tough for Standard only rares from a popular set to hold price tags over $5. As a result, I am more interested in this card to potentially top $10 in the fall once supply has drained, on the assumption that there will still be a red or Rx aggro deck that wants this card in the aggro friendly early days of the fall post-rotation format. If a red aggro deck wins this Pro Tour or dominates the Top 8, there is a chance that Chainwhirler could briefly push $8-10, but supply pressures will likely force a retrace in the coming days or weeks.

Mox Amber was perhaps the most hyped card of Dominaria, with pre-order pricing topping $30 a copy. It’s a mox! Buy, buy! Thing is, this is one of the tougher mox incarnations to reliably squeeze early mana out of, and since a deck hasn’t emerged in either Standard or Modern, we are likely to get a good shot at a solid long term spec here. Later this summer I would expect to be able to snag regular copies under $10, and foils under $20, which is something I feel confidant will pay off over a long enough horizon. Eventually, EDH demand is likely to be supplemented by a tipping point of one and two mana legendary permanents, and an interesting Modern deck should emerge that wants the full four copies. Of course there is also a decent chance that your funds get buried in the spec box for three to five years when you could have turned your funds over multiple times in the interim, so you really just need to decide how much of a pet spec this one will be for you.

At this point, we should all be fairly suspicious of any XX colorless creature that WoTC deigns to print into Standard. Ballista is another multi-format all-star, with significant play in Modern, Legacy and Vintage. Showing up in 40% of decks in Standard at present Ballista has a very good chance of winning the trophy this weekend, in any of GB Constrictor, UB Control, Rx Aggro or WB Vehicles. This card has more than proven it’s mettle at this point but none of that is likely to overcome the gravity exerted on non-foil copies as we head into the fall rotation of Kaladesh block. Consequently you should almost certainly be trying to unload your non-foil copies. Longer term I like foils (especially Russian/Korean copies) as a hold or rotation period acquisition, but for now you should be looking for the fire exit.

Vraska’s Contempt has seen a surprising amount of play in recent Standard decks given that it carries a CMC of 4. Turns out that in a format that revolves around powerful planeswalkers and threats that need to be exiled to be handled effectively, flexible removal that also adds a bit of a life buffer is at a considerable premium. This card has been as high as $16, and may fall closer to $8 this summer. There is a chance that post-rotation in October this is still one of the best removal spells in Standard, and that that fact pushes the card back over $14, but I think I’ll elect to stay clear in favor of safer plays. I think this is also a sell call, especially if you have copies beyond your personal play set.

We have seen expensive mythic angels on the back of strong Standard play patterns before in both Archangel Avacyn and Baneslayer Angel. Lyra however has so far been on a downward trend, starting out around $30 and falling 50% or so since release. With 20% of Standard decks running Lyra, and in a couple of different archetypes, there is a shot that she can recover and push higher if her pilots start putting up big wins this weekend. Overall however, I feel safer with selling Lyra now, and potentially looking to reacquire in late summer once we have a sense of how the fall Standard meta will shape up.

History of Benalia is an interesting spec. This is a mythic card that is showing up in 20% of Standard decks, and the play is supported by  3-4 of inclusion in both UW control and Wx Aggro shells. That’s a strong pedigree, but in just one format. The real question is whether this can be just as good after rotation. If it is, this could be an excellent fall payoff, with the card spiking over $30 at some point in the next year. On this premise, I suspect I will be interested in $15 copies later this summer. On the other hand, if the white enchantment posts up strong Top 8 results and/or wins the weekend, the spike could come a lot sooner. Keep an eye on the Day 2 conversion rates to decide if that’s a decent play in the shorter term.

Will any of the teams find a way to unlock a hot new deck with solid game against the entire field? Will a fringe deck from the early weeks of the format suddenly end up perfectly positioned to take off? Will there be a chance to get in on a must-have card that shows early promise or will the hype train leave the bandwagon speculators out in the cold without enough buyers come Monday morning? Follow along as we explore Pro Tour Dominaria!

Editor’s Note: We will not be providing round by round coverage this weekend but we will provide relevant notes as the weekend progresses.