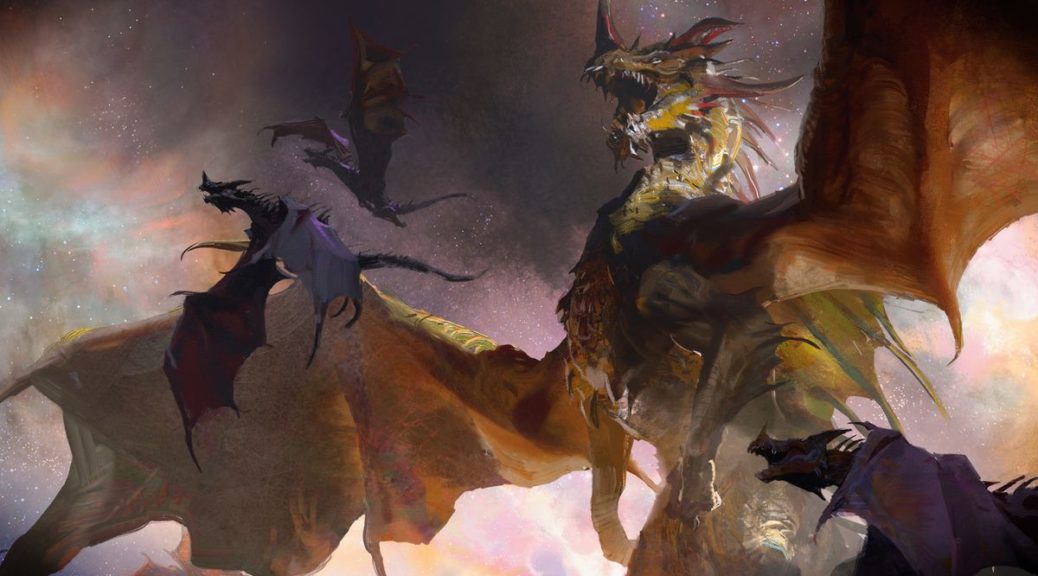 So here we are, neck-deep in Core Set 2019 previews and I’m trying to recover from Vegas.

Hopefully you saw me, my sign, and my love for Cube Draft.

What I also did was some serious work on upgrading the manabase of my favorite Commander deck: The Ur-Dragon.

Happily, Wizards decided to reward me, by giving us a Core Set with lots of draconic goodies. Dragons have to be one of the most popular tribes in Magic, and today I want to look at the previewed goodies and the effects on some older cards.

This is, in a lot of ways, an upgrade to Dragonspeaker Shaman, a card I already love dearly. I rarely get to cast two Dragons off the Shaman, and a planeswalker tends to be much more resilient than a lowly 2/2.

I doubt I’ll replace the Shaman with Sarkhan, but more immediate is that this price is garbage. Standard doesn’t need this for Glorybringer or other five-drop Dragons, though you’re going to see builds where he’s a four-of and enabling all the Dragons of all the colors. He’ll be lucky to maintain a $7 price tag, being so niche, but the foils are going to top $25 and stay there.

This is a future bulk rare/$3 foil that is in the vein of ‘how many red Enchantment payoffs can a deck have?’ Where Ancients Tread. Warstorm Surge. Sunbird’s Invocation. Flameshadow Conjuring. And so on, and so forth.

Is this good? Absolutely. I’ll let you do the math and the decisions about your deck.

This won’t be bulk–she’ll be a terrifying Commander in her own right–and the foils are worth stocking up on. Do be aware that this is the definition of a win-more card, as you’ve got a big Dragon in play, and you have to cast more Dragons to get even more Dragons! Utvara Hellkite can at least come down and give you some Dragons when you move all-in.

Crap: Chromium and Arcades: These two do unique things but they aren’t lining up well with what Dragon decks want to do. I’m not going to play them, but I can see Chromium being a Standard finisher.

Meh: Palladia-Mors: Interesting, but not powerful. The hexproof loss is permanent, and triggers even if you’re just blocking or using it in a fight.

Auto-Include: Nicol Bolas and Vaevictis the Dire: Nicky v.5 is just a huge beating. Yes, you can respond to his ability with removal, and yes the walker version of him costs 11 mana to get to. Holy crap is he powerful and worth all the problems. I strongly suspect that we’ll see many EDH decks devoted to him. Vaevictis is Chaos Warp for each player, and that’s an effect I love. Do you enjoy it as I do? Likely not, but play with it for a while and see.

Nicol Bolas the Ravager is already $30 and is likely to hold a lot of that price. The casual appeal will be quite high, and that’s a market which will drink up supply and not circulate copies. I think $20 is the reasonable ending.

Dragon’s Hoard ($2 right now, but going to be bulk and a $6 foil): I couldn’t ask for a better combination of abilities. This is so damn fantastic, a tribal enabler that every other tribe will be jealous of. I hope foils have a chance to get cheap but I doubt they will.

Old cards that are due

Sarkhan Unbroken (currently $10): Dealers had posted this on their buylists for $8 by the end of GP Vegas and I suspect it’ll be $10 this weekend. Small supply, a lot of Dragon players already have theirs, and he’s just awesome in this sort of deck. He’ll be doubling to a $20 retail pretty soon, and please keep in mind that the reprint risk is real. Foils at $24 are a prime target, and given that there’s less than 40 on TCG, that supply could vanish real fast.

Dragonlord Silumgar ($6/$17): Cube-worthy, really awesome, requires a Dragon deck with these colors. About 60 copies on TCG for the foils, a card I want to have a few of in stock when they spike.

Temur Ascendancy ($3 in foil, for now): Look, just go buy one right now. There’s 27 on TCG, and this is in 5000 decks on EDHREC, and it’s the card I want most in my deck, with the possible exception of Dragon Tempest. The combination of playability and low supply means that someone is going to spend about $100 (plus the kickback!) to sweep these up. Get yours first.

Kindred Discovery ($8): You know this is a good card in any tribal deck which has blue. It’s an incredible source of cards, it was in one Commander 2017 deck. Get yours now.

The Ur-Dragon ($4): I’m pretty stunned that this is so cheap, and only the head of 700 decks on EDHREC. I get that it’s nine mana, but it makes everyone else cheaper! I strongly suspect this is about to pop to $10, and that’s going to be very good for the value of the sealed deck.