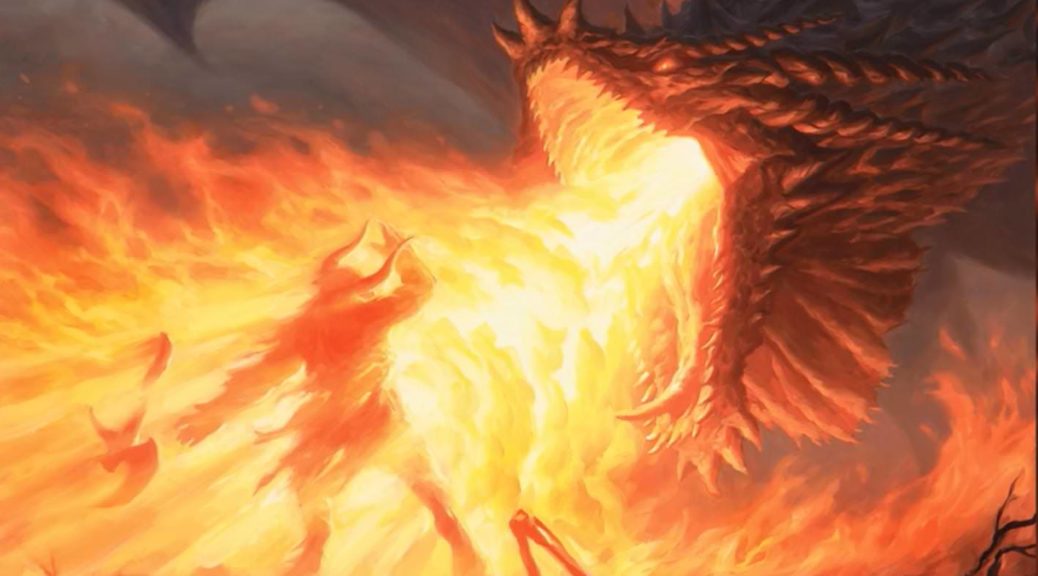 M19 has been added to EDHREC and it doesn’t really surprise me that much. I thought there might be some more Vaevictis Asmadi decks than there are but while that is going to happen over the next few weeks, it also feels like favorites have been chosen and historically, the way things pan out the first week or two is how they end up long-term. The top 3 EDL cards are spread out and while they’re ten or twenty decks apart, it also feels like they’re orders of magnitude apart, too. 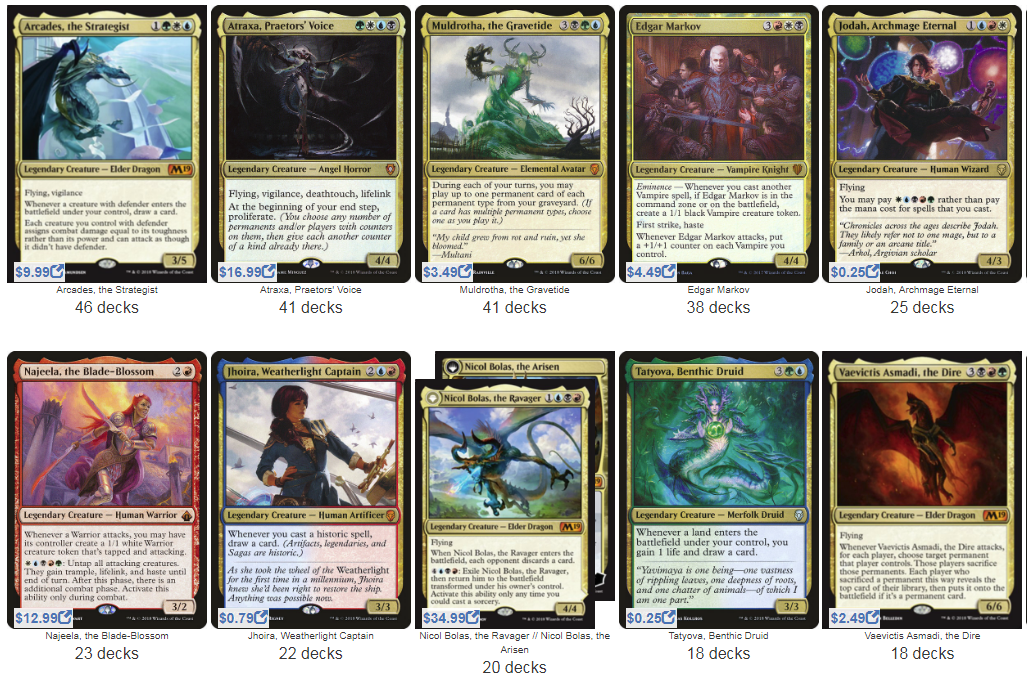 Arcades is coming in at basically twice as many as Nicol Bolas and Vaevictis. As much as I love Vaevictis, I’m really surprised we’re seeing nearly as many registered decks as Nicol Bolas, who I expected to be a clear #2. That’s good news for Vaevictis, who is a fun commander and who I expect to be less popular than the linear and boring Arcades who has the clear benefit of being so obvious that it makes people with no imagination feel like geniuses because they figured out you should put a bunch of walls in the wall deck.

I think I’ll do a bit of a hybrid piece today because while I plan to mostly talk about Vaevictis and the opportunities in that deck, there are a non-zero number of Arcades cards that may have been missed that are just starting to emerge now that we have more data to sift through, so let’s start with the Arcades cards that you may have a chance at and move on. 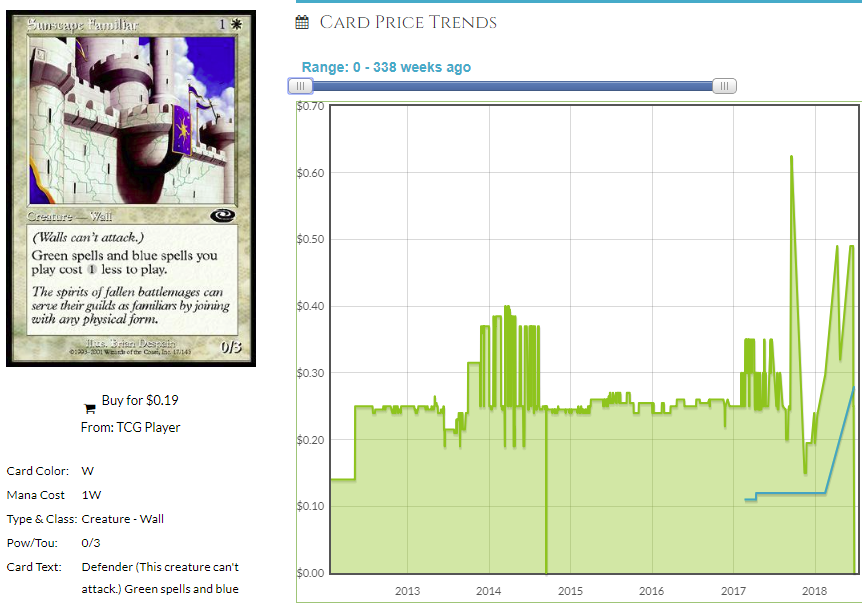 This has crossover pauper appeal and supplies are drying up. I won’t say anything crazy like that a Planeshift common has a similar supply to a Dominaria rare because I don’t know the stats on that. What I do know is that there is a lot of demand for this card, supplies are dwindling online and this is a card that wasn’t originally targeted by team obvious. I am not a fan of the hand-waving that seems to accompany saying “just get foils” as if that’s some sort of panacea for every factor of supply and demand surrounding a card that you have no way of knowing but let’s at least look at foils so we can say we did a thorough job, here. 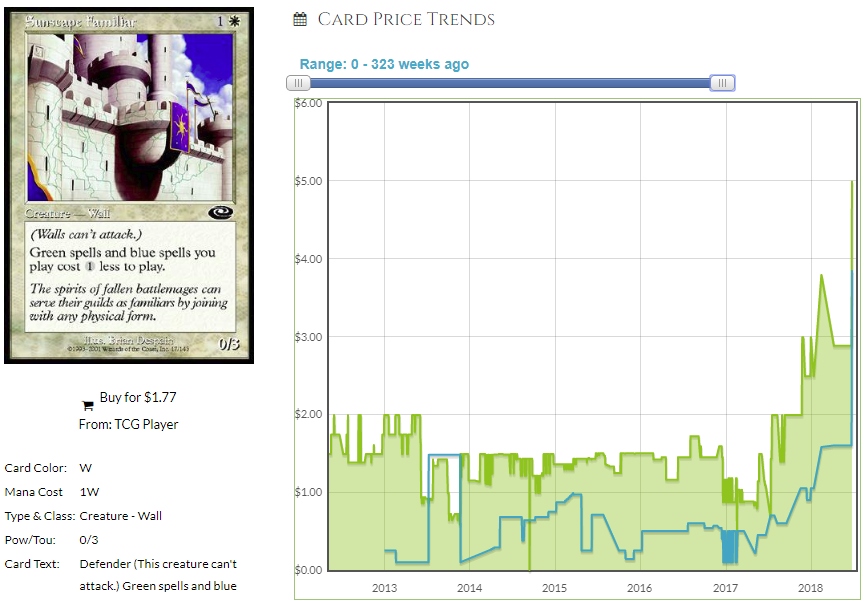 And there you have it. $5 in future bucks and under $2 on TCG Player for the time being, probably because the foils at $1.77 are damaged and also because the $2 minimum on TCG Player tends to strand cards there because the minimum for an order is $2. This will be $10 on Card Kingdom and there will still be a torn copy on TCG Player for $1.77 and half the scrapers programmed a few years ago will call this a $2 card. Let people think this is cheap, I guess. 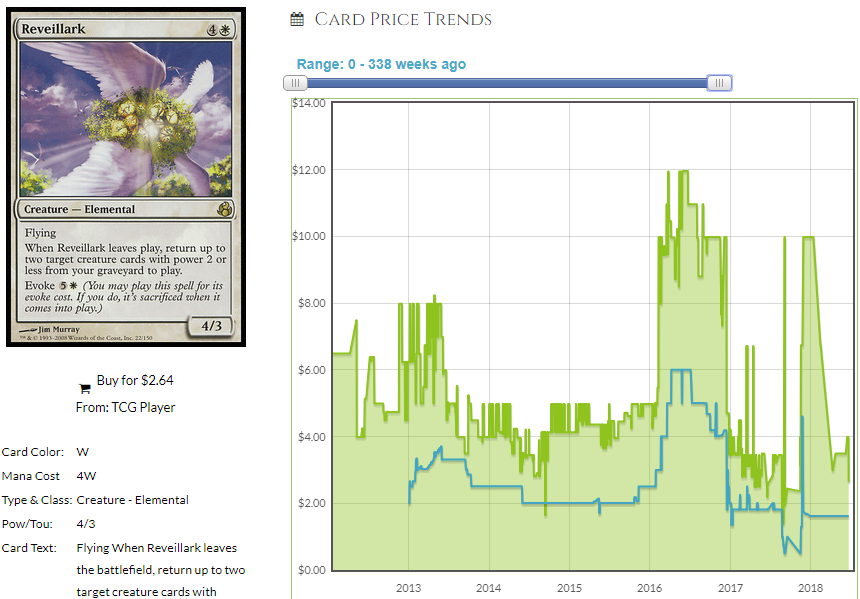 This card may be dead due to its repeated reprintings, most recently in the mass-produced Commander decks. The demand for this card is going to increase with its ubiquity (if people are smart, anyway, which they demonstrably are not) in Arcades decks which could give it a boost. Commander 2016 stuff has been around long enough that a lot of it’s popping, even high-supply stuff that had multiple reprintings. 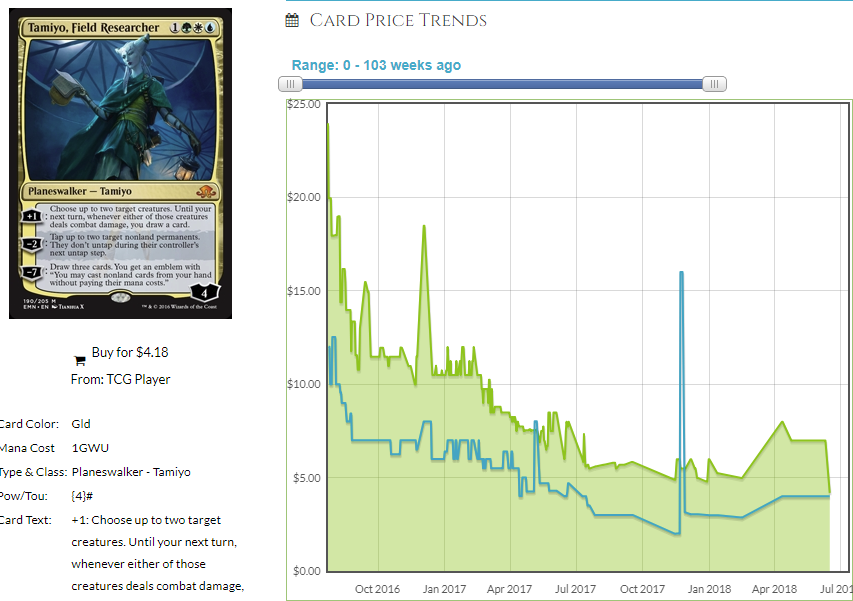 This is a $10 card waiting to happen. Supplies are drying a bit and this isn’t just in Arcades decks, although the emblem wins you the game in Arcades decks unless you get supernaturally unlucky. You should be able to draw a card or two for every wall you play for free which will let you draw your whole deck, lands and all. It’s a boring-ass Lab Maniac win but, whatever, people like that. I think if you literally only make one move based on my articles this year, buying a ton of copies of Tamiyo as close to $4 as you can find them is bound to pay big dividends. Make sure to buy a one year Pro Trader subscription when these hit $11. Don’t quote me on that. But these look positively poised. This is the 27th-most-played multicolored card (All 10 signets are in the top 25) card on EDHREC and no other gold Planeswalker sees more play. I will write about this every month just so I can look back in two years and see how it’s a dollar or two more every time I talked about it. 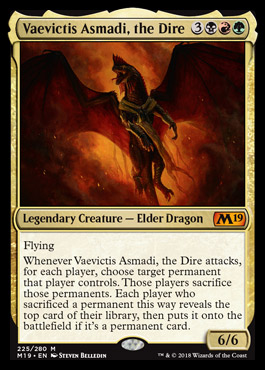 Let’s talk about the stuff that our new Dargon overlord is going to give us. 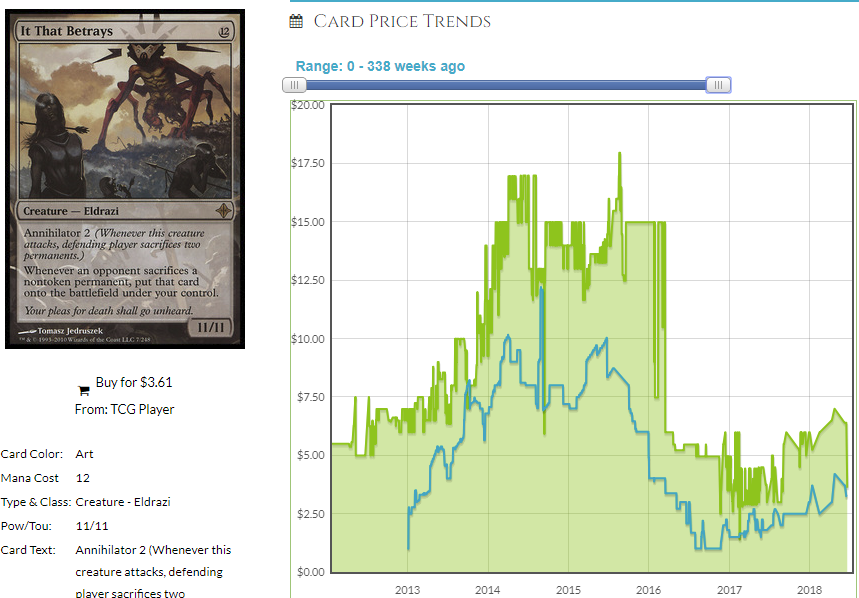 This card was made for Vaevictis decks. The power from this card doesn’t come from casting it so it’s the perfect Eldrazi to cheat into play with Vaevictis’ ability. After that, your opponents being forced to sac something whenever Vaevictis attacks just puts a ton of gas into play on your side of the battlefield. These are currently cheap because of a printing in a duel deck but the new demand for this and the historical demand for Eldrazi will combine to buoy this price pretty easily. If you can get these under $4, do that. This has shown a willingness to flirt with $20 in the past so there’s no reason to think a Duel Deck printing can keep this under $10. Other decks that cheat big creatures into play like Mayael and Jhoira can benefit from this card as well. This is a solid buy at TCG Low, especially since Card Kingdom is selling these at $5.50 pretty swiftly. 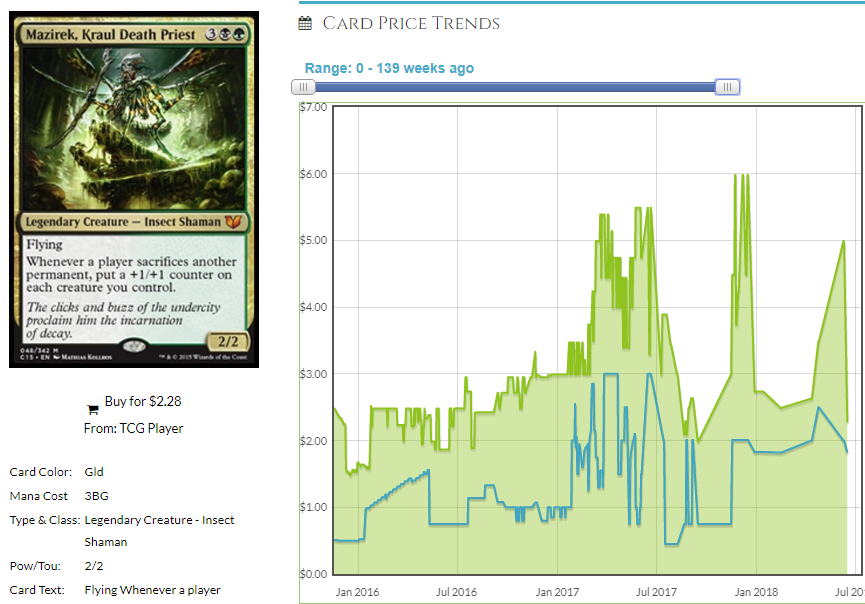 I don’t think the Commander Anthology printing had a ton to do with anything and I think if Vaevictis gets more popular, Mazirek has serious upside. A fine commander in its own right, inclusion in a popular new deck only bodes well. I don’t know how high this can get but it’s flirted with $6 in the past and if TCG Player truly has $2 copies, that seems like a pretty safe bet. 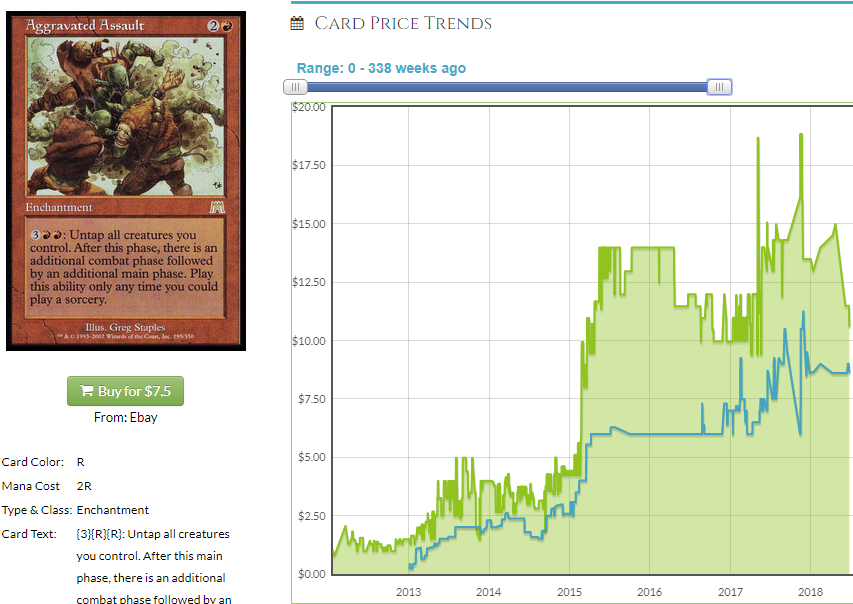 The Explorers of Ixalan game gave us a lot of new copies of this card but demand has shown that it’s willing to increase at a much faster rate than supply, barring another reprint. This is a card that’s not liable to get cheaper than it is right now and considering how important it is in decks like this one, I think it’s a fine time to pick these up, knowing you’re secure in your investment in a card that will be good as long as attacking with creatures is good. 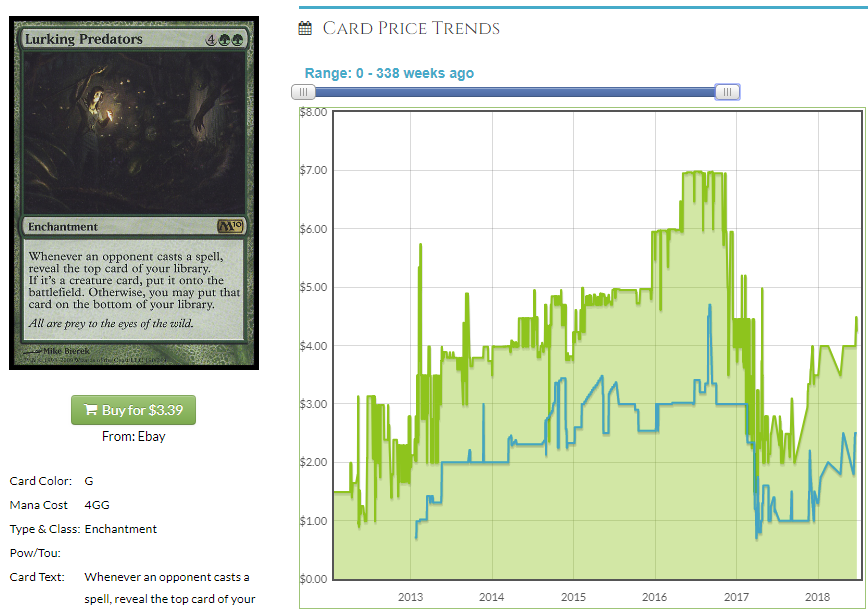 I’m 100% positive I said (if not in one of these articles, then on the podcast or in a tweet) to buy these when they bottomed out right around a few months after Commander 2016 coming out when these hit $2. I hope you did. If not, I think it’s about halfway to where it’s going so there is still time to make some money. This is a great card and if you’re stacking the top of your deck like you need to be with Vaevictis, then you’re going to benefit from them giving you free creatures. 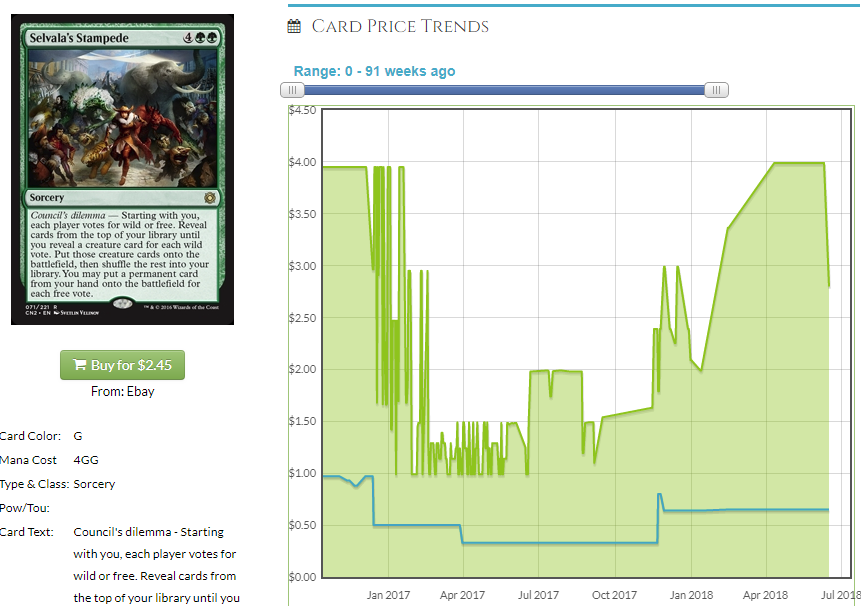 If you’re manipulating the top of your deck a lot, your opponents are likely to choose the option that lets you play from your hand, which you’ll need, because you’re liable to draw some fatties and this is a great way to play them easily. This card is perfect for decks with a ton of big creatures and it’s also just a green card that should be in more decks. It’s from Conspiracy 2 and supply is basically dried up since no one wants to buy booster boxes where there are useless cards so this is just going to go up. Dealers don’t seem excited by this but I am. This is a solid card and considering Rishkar’s Expertise is going up, too, I’m excited for the future of this card which is a more fair Tooth and Nail.

I think there’s a lot to mull over here. Next week I’ll take a look at any of the half dozen new deck archetypes that are springing up, probably the new Nicol Bolas. In the mean time, keep watching EDHREC for emerging archetypes, or popularity orders swapping. If you spent 5 minutes reading this article I’d recommend also spending 5 minutes a day on EDHREC poking around. I find it just as good an investment of my time as the time I spend poking around on MTG Stocks or the Magic subreddits. Until next time!