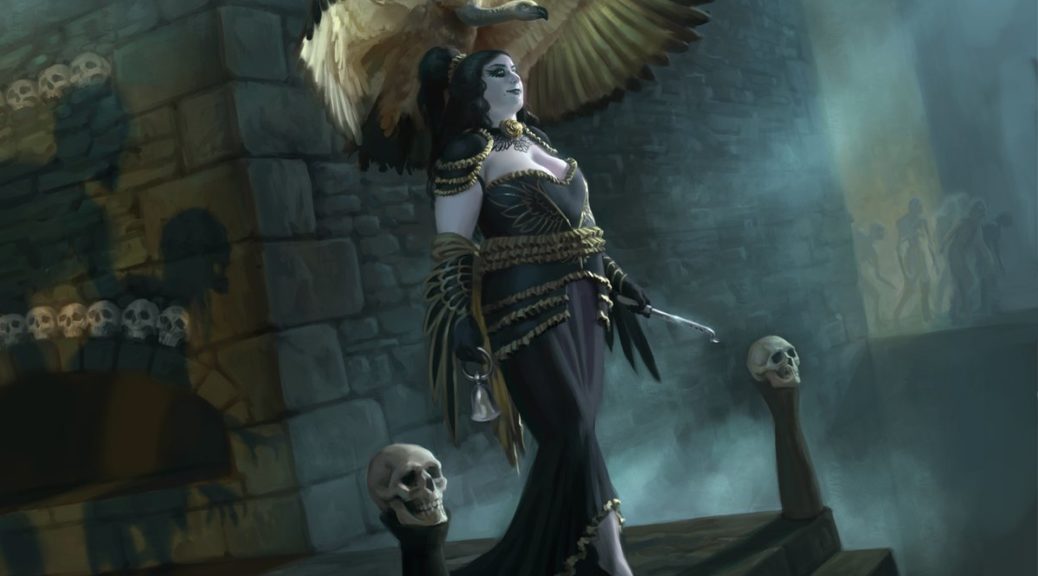 There are not many weeks that are as exciting for the Magic market as Commander preview week. Standard preview weeks are fun and exciting of course, but they don’t move too many needles outside of that format, and it’s not a particularly profitable format at that. Commander previews though? Hoo boy. Here’s an example: Varchild, Betrayer of Kjeldor. She’s got the odd ability to create tokens under your opponent’s control, and then even odder ability to take them all when she leaves play. (Most odd of all is that they’re 1/1 survivor tokens. Probably not finding those in that new minifig run Hasbro is putting out.) A card like Varchild is going to draw attention to all sorts of cards that otherwise have gone unnoticed.

A lot of cards are going to get bought up this week. If you’re quick on the draw and have a good read on what people will find popular, you can clean up over the next few days. Even if you aren’t paying attention, some of the stuff in your bulk box may suddenly be worth pulling out.

I said last week that the Esper ‘top of library’ deck was the most curious, and with the reveal of all four commanders, I still think that, although in a slightly different way. Each of the other three — Jund’s Lord Windgrace, Bant’s Estrid, the Masked, and Izzet’s Saheeli, the Gifted track closely to their ascribed theme. It’s not to say that they won’t be popular, but rather, looking at them, we can see what the deck inside is (mostly) doing. It’s fairly spelled out. Aminatou, however, is still somewhat of a mystery.

We can read the text on the card, and see what she does, but extrapolating that through the rest of the deck falls flat. Her +1 allows you to swap the top card of your library with one in your hand, which of course is what’s behind me talking about Temporal Mastery here. Following that is a generic blink effect, which on its surface, doesn’t do much with the top of your library. What’s going on there? (Aside from being an infinite combo with Felidar Guardian, and an easy turn-four win if you toss Altar of the Brood in there.) Finally her ultimate is one of the most curious in the game’s history, which picks has every player pick up all their nonland permanents and pass them one seat to the left or right. What? (Also: Teferi’s Protection lol). Reading through Aminatou, it’s still tough to understand what’s happening in the 99.

Anyways, Temporal Mastery. There’s no more obvious auto-include if you’ve got Aminatou as your general. Putting cards from your hand on top of your library is the entire reason to play miracles in your deck. I would have picked some others too, but you’ll notice that basically every rare or mythic miracle has been reprinted enough to make sure there’s no real slam dunks in there. Devastation Tide foils are the closest, but eh.

Temporal Mastery though — about $17 or $18 for Modern Masters 2017 foils right now, and not many out there. It’s an already reasonably popular card that sees action in a variety of places, and now we’re getting a commander that demands you use this card. Supply should dry up fairly soon.

Bant’s commander is Estrid, the Masked, and as promised, she’s all about enchantments. Truth be told, Estrid doesn’t do much Eldrazi Conscription on the face. Sure you can untap whatever creature it’s on, but like, whatever. Conscription itself doesn’t make untapping the creature particularly thrilling in the way that something like Burning Anger would. (Which you can’t play in this deck.) Her minus ability doesn’t do a lot with this either. And really, even her ultimate only interacts with it inasmuch as it does for all other enchantments.

Still, that’s all beside the point. Here’s what matters. There’s a new commander that wants you to play with enchantments, and as far as auras go, Eldrazi Conscription is as big and bad as it gets. (Bonus mid-paragraph pick: foil Sovereigns of Lost Alara.) Your dude is huge, you get annihilator triggers, they trample, it’s the whole package. The only thing that’s going to be annoying is that there’s rarely going to be a creature on the battlefield that’s more of a target than the one that’s been Conscripted.

And that’s where the Estrid, and the deck’s theme comes in. There’s going to be plenty of support in this deck for returning enchantments from the graveyard, cheating them into play, and in general getting as much use out of them as you can. Just like graveyard reanimation means you see the best creature at the table over and over again, a deck built around enchantments is going to mean you see the best enchantment over and over again. Thus, your support for Eldrazi Conscription.

Someone bought a foil copy from me recently which is what got me thinking about this card. It’s a little tough to tell you to buy in at $25, which is where the foils are, mostly because even if they hit $50 or $60, they’ll move slowly. (Still, probably not terrible.) I like the non-foils more, since everyone that plays this deck will want a copy, and even if they only go from $12 to $20, that’s still a healthy move, and you’ll sell a lot more non-foils than foils. All of this with the caveat that it doesn’t show up in the Estrid deck of course, which may certainly come to pass.

Over on the Jund side of things, Lord Windgrace dumps lands into your graveyard in exchange for drawing more cards. A couple of +2s and suddenly you’ve got an entire extra mana base in the yard and you’re almost at ultimate. Fire off a Splendid Reclamation and you’re getting a huge boost in mana production at the low cost of having drawn a bunch of spare cards.

We don’t have to work hard to figure out that Reclamation is good; it’s in over 6,000 decks on EDHREC at the moment. It’s one of the most popular cards in The Gitrog Monster, a commander with a similar engine. You’ll find it in various other places too, although it’s certainly at its best in the frog horror deck.

Eldritch Moon product was sparser than some of the other sets that year, in part based on when it was released, popularity of Standard at that time, etc. Other cards from the set, e.g. Collective Brutality, have done quite well. As far as sets go, it’s more fertile ground than most other recent releases for valuable cards.

With Lord Windgrace coming in a month or so and a new batch of players on the Jund land lifestyle, there will be another pile of players looking to pick up Reclamations. Foils at $4 are going to dry up with no new line of supply, and we should see them land comfortably around $10 sometime later this year.