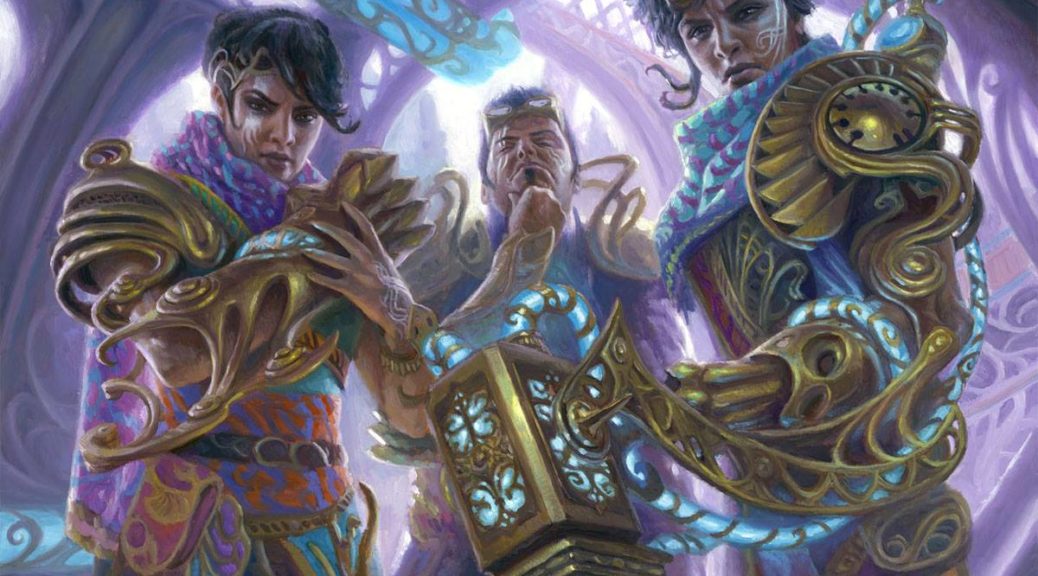 One week out from Pro Tour: Nexus of Fate, and things are mostly ok. One Turbo Fog deck made the top 8 of Brussels, but none cracked the ceiling of Orlando. There were three and four lurking in the top 25 and 32 of each event though, so it’s certainly clear that despite what I imagine is every single player showing up to those events with clear knowledge that it would be the deck to beat, Nexus of Fate is still powerful enough to (reasonably) overcome. Prices aren’t too absurd at the moment at $25 a copy, which makes it one of the most expensive cards in Standard, but not the most, and not a seemingly unacceptable rate for for the format in general. We’ll see how October goes.

If anything, the real problem is Teferi. I’ve seen several pros on Twitter lately remark that every single line of text on that card is poorly designed. His +1 is deceptively protective, since while it doesn’t give you a direct blocker, it provides resources to thwart attacks, and his ultimate (which is your plan A with Teferi, as I understand it) is one of the most miserable ways to lose a game possible.

I was curious to see if I could include him this week as a card to watch despite an already-high price tag, but that just wasn’t going to fly. You’ll pay $35 on TCGPlayer to take home the cheapest copy on the market. For comparison, Gideon, Ally of Zendikar was only more expensive than that for a week or two immediately after release. He was south of $30 for like, 95% of the time he was legal in Standard. Interesting.

EDHREC has got the new Commanders up, and we’re getting an idea of relative popularity, and what people are planning on including. For the first time in awhile Atraxa fell out of first place, and Aminatou took the top slot. (Let’s be clear though, this is temporary. I fully expect Atraxa to reclaim that throne (of Geth) soon.)

Initial builds of Aminatou are going hard on the flicker line, as evidenced by Cloudblazer as the top creature of the aggregate decks. And of course, if you’re on that plan, then you certainly want the king of flickering, Brago the Braggart. He’s not a tough include. There’s no single card that can repeatedly generate as much flicker action as Brago can. He’s made even sillier when you can use a permanent — perhaps a Gilded Lotus — flicker it with Aminatou, use it again, attack with Brago, and then flicker Aminatou to reset her loyalty and +1 her. That type of thing is a lot of fun, let me tell you.

If there’s any interest in flickering permanents in an Aminatou deck, Brago is going to be there. Originally from Conspiracy, his first run of product is particularly shallow. We saw him return (heh) in Eternal Masters last year, which added a fair bit of product to the market. Yet the foil supply isn’t particularly deep. Conspiracy copies start at $10 or so, and you’ll find maybe 25 copies all said and done. (You’ll also find a few foil Japanese copies for sale by yours truly.) EMA copies start cheaper; around $6. For less than $150 you could buy every single NM Foil EMA copy of Brago. Somehow, EMA supply is even lower than Conspiracy. I don’t exactly get that, but it is what it is I guess.

Brago is in a respectable number of decks as a single card, and as a commander, he’s a top 10 all time. Aminatou is going to add a new batch of players looking to reign eternal, and there’s no better option. Barring any more reprints, foils are not going to be much under $15 by next year.

Continuing down the Aminatou page you’ll find Gonti. I’ve mostly been disinterested in Gonti, both as a player and financier; he just doesn’t do it for me in either capacity. I’m not blind though, and I’ve noticed his popularity with others. This was further confirmed when I popped over to his own page and found that he’s in nearly 6,000 decks. That doesn’t sound like a lot, but Kaladesh is still relatively recent, and it’s not easy to push into that many lists in that time frame.

Supply is sort of middle of the pack right now. Three people buying a playset each isn’t going to empty the market, but then again, ten people will. You aren’t going to sell these as sets very often, of course. It shouldn’t be hard to push a sale or two a week once they climb though, and they’ll make great binder fodder for your local store.

What appeals to me here is the price tag. Cards around $2 to $4 are in the sweet spot of cheap enough to actually buy a chunk of copies, and not miss a mortgage payment because of it, and yet still have enough weight that if they quadruple up you’re making more than $1 a copy. At $3.50 or so, these can hit $10 for a solid $5 to $6 profit on each card if you’re selling through an online vendor. They’re also still going to remain fairly liquid, unlike $300 reserve list cards, which can take awhile to find a buyer.

On the bottom end of the scale this week is Vanishment, which is about a magnitude cheaper than Brago. It’s not often that I like cards at this price point, since it’s so tough to realize the gains, but I’ll make an exception this week.

Miracles in EDH have been “ehhh” for awhile. Sure you can do the work to set them up, but even if you did, they weren’t even a major payout. Other than Temporal Mastery and Entreat the Angels, they’re…fine. Then Aminatou came along and is all about manipulating the top card of  your library, including a feature important to miracles: an easy way to put cards from your hand back on top of your library. If you’ve ever tried to brew with miracles in Modern, you’ll know it’s annoyingly difficult to find reasonable ways to put the excess miracles back onto your library. Not a problem any longer!

Most every Aminatou player is going to try and put in as many miracles as they can, because uh, it’s cool and why not. It’s never really worked before, so it’s fun to finally have that as a semi-reasonable option. Which means that while demand for foil Vanishment basically hasn’t existed up until now, it’s going to get a bump.

If you’ve got a pile of these you scored in the sub-$1 range, you’re not going to want to sell them individually if they hit $5. That’s going to be miserable. You’ll either only have four, in which case the effort wasn’t worth it, or you’ll have forty, and you’ll not want to stick every single one of the damn things in an envelope. No, your plan here is buylists. Grab a good chunk of them, wait for them to hit $2 or $3 on buylist, then send them in for store credit with a 30% trade-in bonus. An investment of $25 could turn into nearly $200, if things go your way.