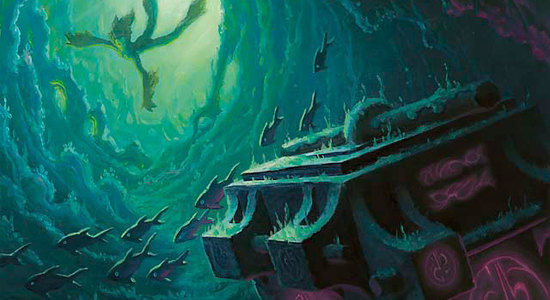 I feel like 5 or 6 years ago I wrote an article called “Foiled” with a bunch of Blue October references in it and the biggest difference between now and then isn’t that back then I would argue if someone said Blue October sucked and now I won’t and it’s less that I don’t think they suck (they probably suck) but now I am not going to bat for bands I like that apparently I’m not supposed to (Can you imagine if I took time out of my day to engage every person who said 311 sucks? Whatever, I like 311 for some reason and I’m too old to care what some 23-year-old hipster with a tattoo of Jeff Magnum lyrics or some other pretentious BS thinks) and it’s more that I just don’t have the energy to try to fit a bunch of Blue October references that no one is going to catch into an article.

I wrote an article about Mairsil on Gathering Magic (sorry, Coolstuffinc) a year ago where I jammed like 25 references to Pretenders songs into it and no one caught on and that felt like a huge waste of time, so screw it. You don’t read my articles because you find me clever, and that’s the second biggest difference between me now and me 5 years ago. I used to think people read my articles because they thought I was smart and good at finance and now I realize you just want me to think thoughts so you don’t have to and you’re paying me a small portion of the money you make using your time more wisely and I’m actually super OK with that. So, yeah. No song lyric references (I mean, not that you’d try to catch them either way), just cards I think this year’s crop of EDH decks could nudge in the right direction. This will go quickly and I’ll probably cover more than one commander but I think there’s value here which is how I get away with how I structure my articles.

I normally am not a huge fan of foils because I think the demand for EDH foils is overstated but when there is a large multiplier already, I think it’s fair to assume that there is room to grow. Let’s look at some I like predicated on C18.

I catch a lot of heat for referencing Card Kingdom prices and I do it for several reasons.

Card Kingdom isn’t TCG Player but they’re down to their last $4 copy of a card that goes in Atraxa, which should be enough. The fact that it’s a good fit in Aminatou, also is great news. Nearly 2/3 of the decks registered run it. 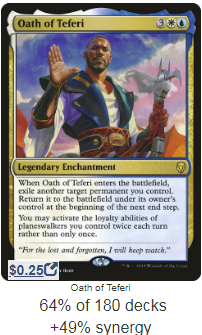 Now a bulk, non-mythic rare in the best-selling Magic set of all time isn’t super exciting, but there are significantly fewer foils and this has a 16x multiplier already and is still selling out. I predict this could hit $10 in a year or two and $4 seems like a pretty reasonable entry point to me. I don’t know foils as well as James does so I’m not going to tell you what I think of Combustible Gearhulk Masterpieces (Actually, no, I will tell you. Combustible is in a mere 800 decks fewer than Noxius Gearhulk’s 6,350 decks [just under Massacre Wurm and just above Painful Quandary in the EDHREC Top 100 Black cards] and Noxius Masterpieces popped already, so I guess I do have an opinion) but I will tell you Oath of Teferi is in 685 decks between Aminatou and Atraxa and that’s not bad for a card that was printed AFTER Atraxa. This has legs.

This is a double threat given its efficacy as a standalone commander as well as an inclusion in many decks. 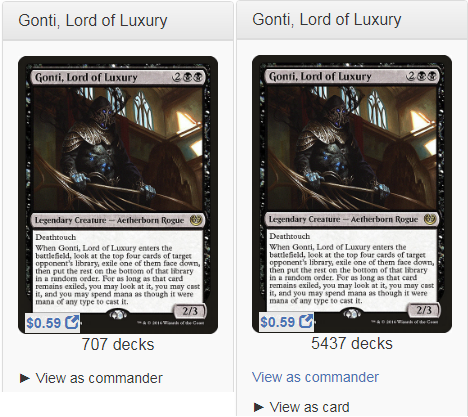 I like the underlying metrics here, I don’t think Gonti is particularly reprintable and even less so in foil and I think $4 is pretty cheap for something like this. Again, it’s a 16x multiplier but we’ve seen wider divergences than that and I think this has real legs. If I’m totally off base, I’m sure I’ll hear about it but despite my relative inexperience with EDH foils, I think this is pretty solid.

Can you try to guess how many decks this card is it? It’s a Counterspell you have to pay mana for and it draws your opponent  cards. Probably not too many, right? 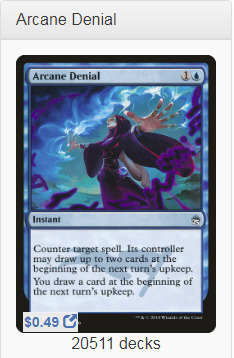 It turns out a lot of people like this card. It’s the 12th-highest-played Blue CARD on EDHREC. Not Instant, CARD. At $2 for a foil from a set that’s at peak supply currently that was the first time to print this card in foil despite there being 5 other versions of it, I think we could see a 2.5x increase pretty trivially. I am surprised it’s this low. I know it’s common but this is also the only foil version of an insanely popular spell from a set with expensive boosters.

Guess this method has some legs. Speaking of legs, we saw Dramatic Reversal go from $1 to $4 in under a year, how many decks is Reversal in compared to 20k for Arcane Denial? 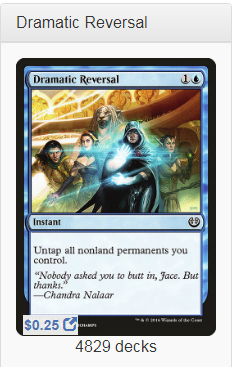 Lol. Ok, then. So we have confirmed 400% growth on a card in a fifth as many decks? That would seem to indicate $8-$10 for Arcane Denial in about a year is pretty reasonable but I don’t really know what foils do. I do think there is a 0% chance you don’t make money buying foil Arcane Denial at $2 and I don’t care that there’s a foil in every M25 pack. I don’t think you can lose at all here. I’m inclined to throw a couple hundred  bucks at this just because I always forget to buy my own specs. If my articles had the power to spike cards on their own, Seance would be $10 and I could afford to retire.

Let’s look at another commander.

This isn’t all that likely to get a reprint in foil and I don’t even know about a non-foil reprint either. All of this could get nerfed by them deciding that there is no good reason not to do a Commander’s Arsenal every year at Christmas but until they come to their senses, this seems safe, it’s in both Estrid and Tuvasa, tutors for Sanguine Bond and Exquisite Blood in decks with access to Black and White and generally does work. 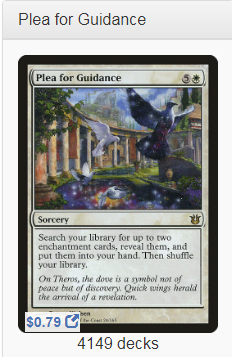 That’s not exactly 20K, but it is pretty close to what we saw for Dramatic Reversal and that showed some nice gains. CK has 1 copy left and as much as I want to buy it, I’ll leave it for one of you. They can only increase their buylist so much before it becomes possible to arbitrage from TCG Player and if it gets even close, the price will adjust. This seems like an obvious buy at $3.

This used to be more than a 2x multiplier but with more people playing Enchanted Evening (which spiked to $35 based on its status as a kittycat more than anything else) the non-foil went up so much the multiplier is 2x. One of those prices will correct. Let’s try and guess which one.

This is old, low supply, powerful, part of a try-hard combo played by people more likely to do shenanigans like this and also foil their decks and in general, seems underpriced at 2x. Card Kingdom’s last copy being EX rather than NM may be the only thing keeping the price from changing already – TCG Player has one seller trying to get $25 from a NM foil. If you can get there around $10 in good shape, which may not be possible anymore, I would.

This is pricey a bit but it’s also barely a 2x and with the reprint risk of this being very low, I think this climbs. I don’t know how much – I can’t imagine someone shelling out $50 for this, but I sold a Ydwen Efreet for $100 this week so I don’t even know what to think anymore.

Foils. They’re harder to reprint, WAY harder to sell and really hard to predict. I can pick boxes of commons and uncommons all the way down to a nickel without having to refer to the sheet more than a few times a minute and I look up every. Single. Foil. Good stuff is usually worth a lot in foil, but it’s the stuff I had no idea about that really gets me. Foil Sea’s Claim is worth more than foil Thirst for Knowledge? OK, then. Until I learn a bit more about foils, I’m going to continue to challenge myself to find these picks using my traditional method. In the mean time, hitting on a 3x gain on 15 copies of Arcane Denial will pay for a year of Pro Trader and I think it’s a really low risk scenario. Thanks for reading and I’ll be back next week with some Jund and Izzet picks. Until next time!