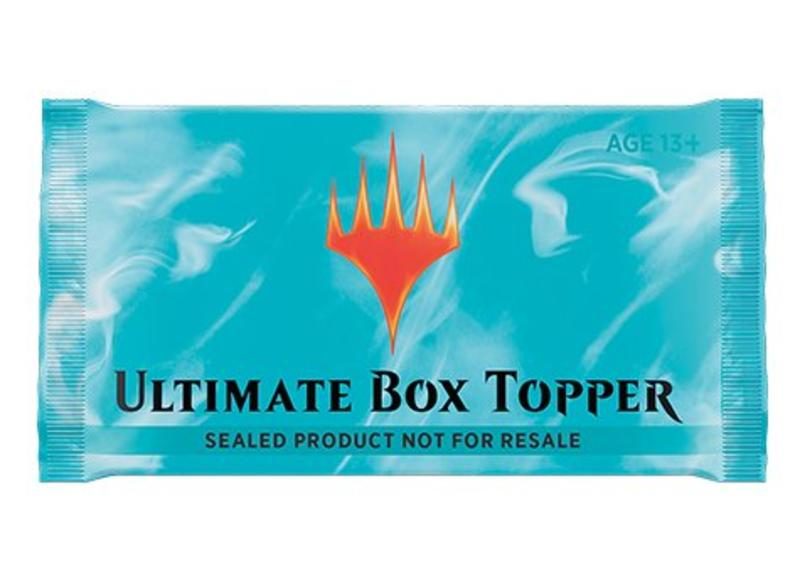 Ultimate Masters is the latest attempt by Wizards to find out how much we’ll pay for new cardboard. It’s well established that we’ll pay a lot for old cardboard, and they got a glimpse of our madness with Mythic Edition, but UMA is the logical next step.

What they mean by ‘It’s the last masters set for a while’ could mean any damn thing they want, but the Box Toppers are truly a well-designed attempt to drain our wallets dry.

This week, I want to go over the list of those cards and see where they are starting, and offer my thoughts about where they will go.

I do think there’s going to be more of each Box Topper (which I’m going to call a Boxterpiece from now on) than there was for each Mythic Edition planeswalker, but I also think that the demand for these will be much higher, since Wizards basically took the list of the most expensive cards in Modern, deducted Jace, Mox Opal, and the fetchlands, then reprinted the rest.

For current numbers, I’m looking at completed sales on eBay, as we only have a small trickle into the major card sellers.

Karn Liberated – Selling for $430-$200 – Going to hold in the $200 range, big mana and fabulous prizes are always going to be a big draw. Not the most popular in Commander but still sees a lot of play (8k decks on EDHREC).

Ulamog, the Infinite Gyre – Selling for $90-$200 – The last three sales have all been sub-$100, indicating that there’s farther to fall, likely into Kozilek’s $50-$75 range. Keep in mind there’s FTV versions of this card, and not of the other two big Eldrazi. The trio is getting their third printing together, too.

Snapcaster Mage – Selling for $200 – I can see this keeping its price and even trending upwards. It’s one of the most popular creatures in Constructed Magic, in both Legacy and Modern, and is in 12,000 Commander decks online. I won’t be shocked when this is consistently the highest-value card out of all of them.

Bitterblossom – Selling for $150 – Six copies have sold, five accepted best offers, and the one auction ended at $150. It’s not terribly popular in any format, so I think it’ll settle down and be $60 by Valentine’s Day. Yes, that’s less than the pack foil or the 2011 judge promo.

Demonic Tutor – Selling for $175-$300 – I’m very torn on this card. It’s super-iconic, but there’s also a Judge version (which was in the Helvault promo, if you were playing back then) that’s already at nearly $300. That’s a much scarcer version, so I think the Boxsterpiece will end up between $150 and $200.

Goryo’s Vengeance – Selling for $115 – $150 – A rare in Betrayers of Kamigawa, the pack foil is currently $70. I don’t think this will exceed that price, and given that demand is relatively small (There’s really only one deck that plays it) a price of $50ish sounds about right.

Liliana of the Veil – Selling for $300+ – Three people listed this card on eBay for $500 and took best offers. Her pack foil is $250, and the MM17 foil is a paltry $170. She’s not as widely played as Snapcaster but she’s never really had a strong supply. Keeping at $200+ sounds reasonable, and I think the Boxterpiece will end up near the pack foil’s price.

Mikaeus, the Unhallowed – Selling for $80 – $150 – I tried to trade for one of these at $150, knowing the price was high, and all I feel is relief that he found a bigger sucker than me. A super-awesome Commander card, this is his first reprinting. He’s got further to fall, though, and will be in the $40 range.

Reanimate – Selling for $60-170 – This is falling quite quickly, and that makes sense, since it’s only playable in Commander and Legacy Reanimate. There are no pack foils, just an FNM version from quite a while ago and the Graveborn Premium Deck. This will end up being one of the lowest-priced Boxterpieces at $30-$40.

Balefire Dragon – selling for $60-$70 – This has remarkably been the price for all the completed auctions. I think this is a good price, too, given that it’s a mythic again and the pack foil is about $30. Dragons are super popular right now! It’s going to drop a little, but not below $40.

Through the Breach – Selling for $200-$300 – My favorite new art, as it shows both a story moment AND a frequent tournament play. The first three auctions ended at or near $300, the more recent three took best offers under $250. It’s not popular enough to hold this price, and frankly, I don’t expect it to go much over $100. The people who need it need a playset, but no one else is going to be interested. The pack foil is $100, and the Invocation is $80.  This is so much more awesome in art than either of those, though.

Eternal Witness – Selling for $120-$150 – I’m pretty shocked at this price, given that the pack foil and the early FNM version are both near $40. This will be the most expensive Witness, that’s a given, but more like $75. It’s the most popular creature in EDHREC’s database, being in 43% of all the decks ever posted there. Fifty-five thousand and change.

Life from the Loam – Selling for $100-$150 – Dredge is ascendant in Modern right now, and Legacy Dredge is a thing of beauty too. Loam is also a delight in the Lands decks, and seeing enough play to spike the nonfoils to the $30 range. Pack foils are $100, MM13 foils are $50, and I’d expect this version to settle in between those.

Noble Hierarch – Selling for $150 – This is one of the most popular cards in Modern, and the most popular creature overall. There’s also a range of foils to choose from: the pack foil in Conflux, the MM15, the Pro Tour foil, and the sweet old-border Judge version. The good news is that if you’re playing this card, you don’t shave to three of them, you’re playing four or none, so demand is real. I think this price will tick downwards a little, but not too far.

Tarmogoyf – selling for $500ish – I believe this is the only card to be in all three Modern Masters sets, but if there’s others, do let me know in the comments or on Twitter. Three of these have been listed on eBay, all asking more than $500, but they all took a best offer. Pack foils are $700 or so, and the cheapest foil is the most recent, the MM17 at $100. Is this a $500 card? Maybe. I genuinely have no idea where this will end up, but it seems a given that it’ll be more than the $200 of the MM13 foil.

Vengevine – Selling for $75-$150 – The pack foil, from way back in Rise of the Eldrazi, is at $80 and the WMCQ foil is about $50. Vengevine has had a real renaissance lately, and this is another one that people tend to play the full set of. I think this will be neck-and-neck with its pack foil, around $75.

Come back next week for the other half!