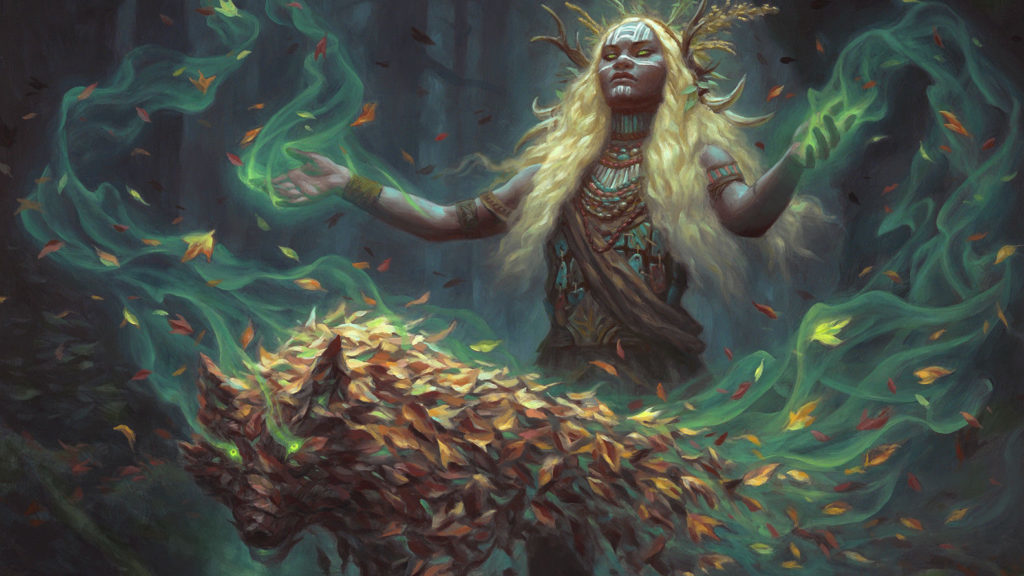 Don’t expect a lot of excitement over the next several days. Our western pagan holidays slow everything down considerably. While players are still enjoying Magic at home with friends, and are certainly capable of placing orders, the lack of tournaments and gaps in content creation tend to slow the market down. It’s only temporary though, as late winter tends to be a watermark for prices each year. Somewhere in February, the entire Magic index will likely hit its peak for the year. I wonder how much of this is due to people just being excited about being able to leave their homes comfortably, although I admit I may be projecting, give I’m in upstate NY. 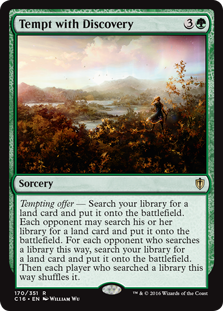 If you’re anything like me, your eyes sort of glaze over this card when you browse an EDH deck list. Tempt isn’t what I’d consider a particularly sexy or fun card. It’s heavily political in nature, and at its best, is just tutoring for a few lands. Now, don’t get me wrong. That’s a powerful effect at a great rate. I’m simply not one to care much for tutors that get non-typed lands, especially multiple at once. Anyways.

There’s no denying Tempt is popular in EDH. You’ll find it in well over 11k lists on EDHREC, so we know there’s plenty of fans. Some of the top commanders for the card are Omnath, Locus of Rage and Gitrog Monster, two fan favorites. And while it doesn’t show up on Lord Windgrace’s page, I find that suspect. This effect would be great in that deck. Basically I don’t believe it’s not finding its way into a pleothora of Windgrace lists as well.

You’ll find copies of Tempt with Discovery at $5 and $6 right now. It’s commonly found with two well-regarded commanders, and will almost certainly show up with Lord Windgrace in the near future. There’s some supply out there, but we’re not talking hundreds. At a glance, there’s maybe 70 copies below $8, with not too many more above that either. If you fade another reprint this year, I suspect we’ll see a $10 floor on these in the future. 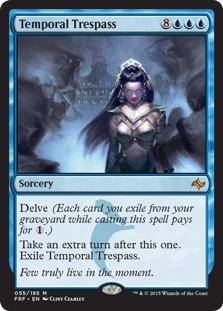 TCGPlayer gave Seth  Manfield a fascinating article a few days ago, in which he looked at the top ten best-selling cards on TCG in 2018. Most of them were Standard commons and uncommons, unsurprisingly. By volume, there’s no doubt that those sell exceptionally well. There’s also no doubt that you’ll go insane trying to grind a profit on $.08 Knight of Graces.

Without question, what stood out most to me was Temporal Trespass. Of all the casual and EDH-oriented cards, Trespass sold better than everything else? It’s not like it just came out this year and people are stocking up. It’s from Fate Reforged, which was a few years ago now. Why would this be so popular this year? This is also TCGPlayer we’re talking about. They’re no small organization. A few guys deciding to try to corner the market on Trespass wouldn’t be able to buy enough copies at once to put this into the top 10 sellers. Anything on that list needs to be a sustained effort. 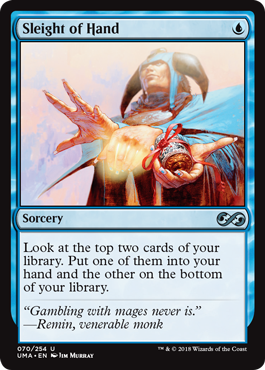 While Sleight of Hand has been in Magic since 1998, there’s not that much of it out there. It started in Portal Second Age and Starter 1999. It made an actual return in 7th and 9th editions, the latter being how it ended up Modern legal. Those two sets were also previously the only foil copies. If you’re reading this article you’re probably aware of what 7th foils tend to look like, and 9th isn’t that much better. Fast forward to 2018, and Ultimate Masters brings us the first foil since YouTube was created.

I don’t feel like telling you about Sleight’s popularity is necessary. It’s been a staple of Modern for a long while, and I wouldn’t expect that to change anytime soon.

The cheapest non-UMA foil Sleight is about $60, so $8.50 certainly looks like a steal. I’d be happy to snag copies at $8 to $9 all day, especially in trade. They’re plentiful now, but I bet it’s going to be a very different story in six months.