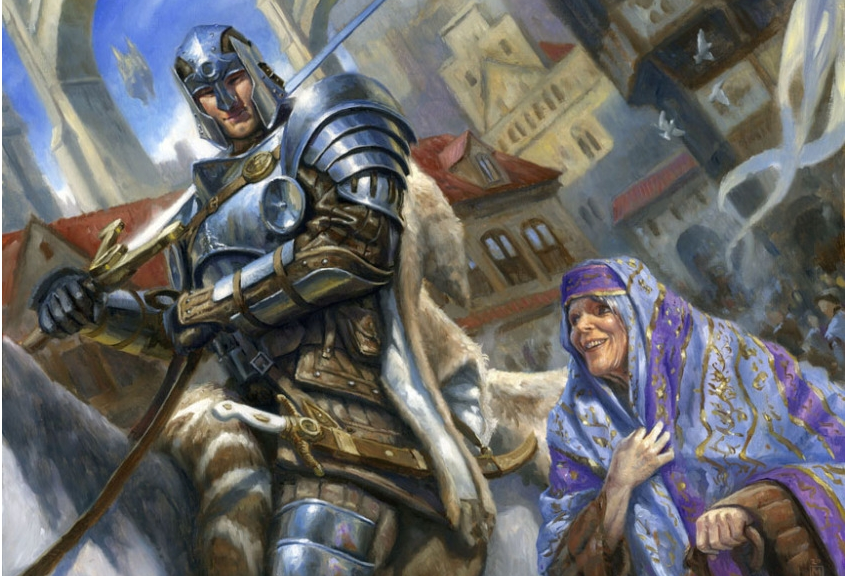 As much as I enjoy rambling about Modern and all the wild possibilities that the format is never kind enough to materialize, it’s not too exciting to look into at the moment. GP London saw Izzet Phoenix absolutely take over, with something like 23% of the field on day one. That’s an absolutely staggering percentage for a format like Modern, when 5% of a day is typically indicative of a tier one list. Pair that with Modern’s forthcoming upheaval (perhaps including Upheaval), which while exciting to consider, has rendered today’s Modern fairly meaningless. As Modern cards that I suspect will remain relevant cross my path, I’ll be sure to mention them, but for now, we’re keeping our sights on EDH.

This is the third time the building our apartment is in has sold while we’ve been living here, so we didn’t think much of it when we received notice. We straightened out our security deposit on the new estoppel, signed the document, and got back to the standard tenor of our everyday lives. It was only when one of the business tenants of the building came to speak with us because they had learned that the new buyer had no intention of renewing anyone’s leases. Ours was the first on the chopping block, with an expiration date of August. Phone calls were placed, and the sum of it was resounding uncertainty. Left with no clear idea of whether we’d be allowed to live here past August, we had to reconsider our heretofore, uh, relaxed pace of home discovery. Faced with the possibility of needing to come up with a down payment a year earlier than expected, I took to my collection to see what I could begin liquidating. A box of Masterpieces found its way to the front of the line, and up a few went to test the waters. Within 48 hours the first sold; a Mana Crypt for $315. This recent sale was on my mind when I went exploring for this article, as it had been awhile since I had perused the Inventions from Kaladesh.

That chunk of filler text aside, Rings of Brighthearth jumped out at me as one of the better positioned Inventions. Stock is low, perhaps the lowest of all the NM Inventions right now, with only 10 copies available for purchase at TCG (with zero left at SCG). Checkmark number one. Sorting the Inventions by most popular, you’ll find Brighthearth in sixth place. Checkmark number two. (Now, I take that to mean that Rings as a card is the sixth most popular within the list. Given that Cataclysmic Gearhulk is the second most popular, and there are 32 copies of the MPS left, I don’t believe it is looking specifically at the MPS copies.) Third, the pack foils of Rings have just about exceeded the Inventions copies. While the market price on those pack foils hasn’t caught up to the lowest listed price, that just means there’s a lot of attention on the card at the moment as it is. If people are buying out the pack foils and driving the price upwards of $100, what’s going to happen to the MPS copies?

Niv Mizzet has been enjoying some time in the sun over on EDHREC, which sent me perusing for anything worthwhile. It’s a lean build from our perspective, as there’s a lot of “dead” cards – Opt, Ponder, etc. Excellent for the build, terrible if you’re looking to make money. One card that’s not so poorly positioned though is Primal Amulet. As an enabler, it’s obviously excellent in Niv Mizzet, as well as any EDH deck looking to cast spells. It’s also going to be a lot of fun at home, where cards like Cloud Key always entertain reasonable popularity.

At 4300 decks, it hasn’t exactly exploded into EDH. At the same time, it’s from Ixalan, a relatively new set to EDH. It’s the sixth most popular from that set as it is, and the gap between it and the first card is reasonably narrow. Given that it’s about 2/3rds as popular as Growing Rites of Ixalan, a “fixed Gaea’s Cradle,” I’d consider it a well-positioned card.

You’ll find a few pack foils hanging around at $5, though not too many. Prerelease foils are around $7 or $8, and the Buy-A-Box promos are $8 or $9. Pack foils at $5 are solid, though I certainly also like the BaB copies. If we see pack foils get to $15, BaB copies to $25 seems entirely plausible.

There’s nothing too revolutionary here, but Utvara is worth keeping an eye on. As a dragon that makes dragons, you can see how he would strike a chord with certain players. He doesn’t need to attack to trigger, either. It’s so long as any dragon attacks. Plop Utvara down on the table, swing with two or three other dragons, and you’re in business. (This gets even more fun if you have Dragon Tempest in play along with an effect that lets you attack more than once in a turn, as the dragons you create on the first attack get to swing on the second, generating even more.)

At 8300 decks, Utvara Hellkite is solidly popular, if admittedly not an Eternal Witness. However, popularity within the tribe is remarkable here. Dragons are the second-most popular tribe in EDH according to the numbers, behind only Zombies. And within Dragons, Utvara Hellkite appears to be the single most popular card of the tribe. While the overall number of people playing Utvara Hellkite may be middle of the road, if you decide to play tribal, there’s a good chance it’s dragons, and if you’re playing dragons, you’re almost definitely playing Utvara Hellkite. And we both know Wizards isn’t going to stop supporting dragons any time soon.

Pack foils of Utvara Hellkite are floating between $10 and $11, and supply is well past a tipping point. There are maybe six foils left on TCG? And two of them are $18 or more? SCG has one. You won’t sell multiple a day, but it’s tough to imagine losing money on $10 foil Hellkites. [/hide]