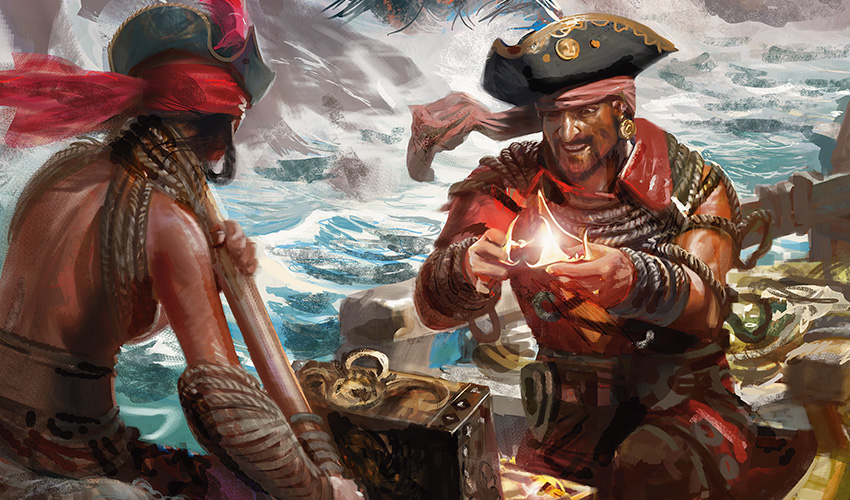 I’ve played a lot of Magic Online. There was a two-year period, from about 2007 to 2009, when I could only play online, as there was no good card shop near to me. Even after repeated culling of the collection, I’ve got something like 50k cards online that I’ll never be able to use in person.

I’m all too familiar with the financial model of MTGO, where you buy digital packs for the same price as paper packs, because there’s a time period when you’re able to collect a whole set and then redeem it online. Some card shops/vendors exist off of that model alone, managing their ticket inventories and buying sets online for the sole purpose of redemption.

I’ve pretty much stopped playing on MTGO, except for Momir Basic, a format that speaks directly to who I am as a gamer. Random, swingy, with just enough skill.

With all of that said, I can’t believe what I’m about to say: Magic Arena is phenomenal value, and let me explain why.

I have been resistant to Arena pretty much from the beginning, dismissive of the weird shapes, unnecessary animations, and apparently frenetic pace of games. I like watching drafts on MTGO; couldn’t stand it if that event was Arena.

That changed a few weeks ago when the Omniscience Drafts were held for a couple of days. Arena’s able to fire off short-term format variants, and those can spike interest from players who aren’t otherwise interested, like me. OmniDraft offered a combination of two things: Dominaria, a set I had done well with and knew the card pool well, and the potential for doing a lot of broken things very quickly.

So I decided I’d try.

I downloaded it, picked a username, sat through the tutorial so I’d understand what was popping up, and bought the Welcome Bundle of 2500 gems and five packs for $4.99.

Having been trained on MTGO, I thought packs I won/bought would be used for drafting, and part of going infinite, but nope. (More on that in a sec.)

The OmniDrafts were 750 gems and my first one went well, but I got crushed a lot and some on the first turn, an experience I dearly wanted to give others. I did some research, reviewed some strategies, and went on a tear.

By the end of the event, I’d done eight drafts, I had 3000 gems, and a couple dozen packs.

More importantly, I’d gotten a whole lot of hours of fun for a mere $5, and I had a collection with some excellent Dominaria cards to start me off.

Now, let’s pause here and reflect on what I’ve spent and what I’ve gotten, but most important, what I’ve discovered.

I’ve said repeatedly that there’s no better ratio of money to amount of enjoyment than Cube drafting, and I stand by that statement. It’s a fantastic investment, and depending on the format and your willingness to print out a picture of a card and slide it on top of a land, can be exceedingly inexpensive.

Arena is in the ballpark for me, and I’m quite impressed.

Since that weekend, I’ve done three more RNA drafts and I have to say that they offer delightful flexibility on timing. I can do the draft, choose all my cards, and then not play for two days if my schedule doesn’t allow it. That’s a level of convenience that I’ve never experienced before.

I love drafting. I’ve been doing it long enough that I’m rarely going to draft a clunking monstrosity of a deck, and I can usually squeeze a couple of wins out of a deck. That’s helped me not have to spend more money so far, but what I’m finding is that I’m interested in playing Standard for the first time in a long time.

I’ve written before about the Gates deck, and the existence of such a good deck that has such a minor cost in paper Magic. Hydroid Krasis is a nice touch for a ramp deck, and a couple of those are as expensive as the rest of the deck.

On Arena, every card of the same rarity level is worth the same, and this is blowing my mind. I did well in an RNA draft with a Gates deck, and then immediately moved it to Standard. I added a couple of wildcards, and boom, I’ve got a mid-tier deck that I enjoy playing and is helping me win. I’m not cleaning up in events, but my goal is to grind some free-to-play action, get more gold, which I’ll use to enter drafts.

I had really low expectations for Arena, having been trained to the mediocrity of MTGO, but I’m a convert now.

I haven’t yet had to buy packs, and I’m not hardcore enough to try and grind up to a tier deck in Standard, but I am having a delightful time playing Magic at home, and that’s an experience I haven’t had in a while.

One thing I didn’t notice until I played Arena: there’s a lot of downtime in games, and Arena games just go faster. It’s difficult for me to put a finger on exactly why. Is it the auto-tapping and triggers that have just one target? There’s less clicking than in MTGO, that’s for sure. Is it the fuse-timer system? Is it something else? I’m not sure but my goodness it’s noticeable.

This is a lot to say but here’s the most important thing: Arena is a good enough program and ecosystem to win me over, and I was a skeptic. I didn’t think it was possible to have a good Magic game online, and now, I’m impressed.

It’s worth noting that this is still in Open Beta mode. There’s ideas and functions they haven’t gotten to, ideas they are tweaking. Most notably, the game was built on Unity, an engine that allows for cross-platform gaming. That means not only will there eventually be a version for Mac, something MTGO hasn’t had in its 17 years, but a mobile version seems quite likely too.

Good Magic games on my phone would be both very good and very bad for me. I sense screen time limits coming!

2 thoughts on “The Value of Arena”