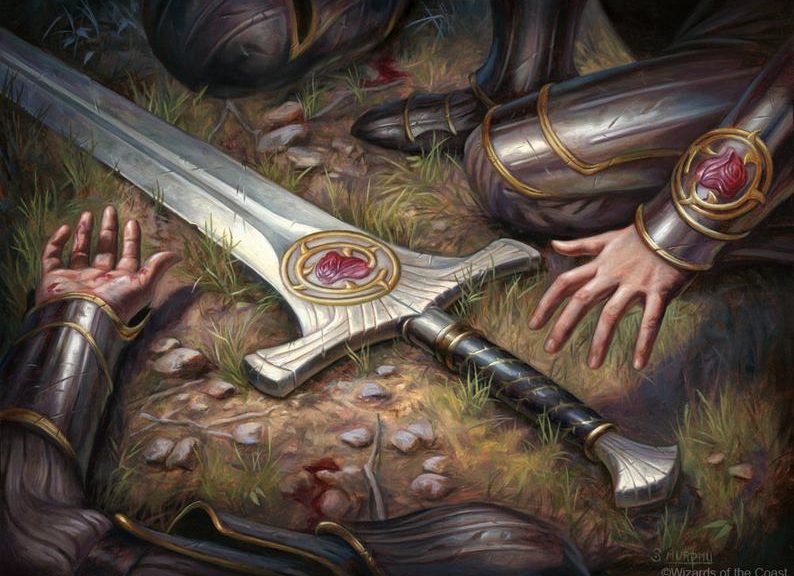 Commander 2019 previews have finally finished, and I hope you took my advice and bought plenty of the foils I told you to buy a month ago.

The headliners for all the decks are three colors each, but one of the odder things about these decks is how the secondary legends can cause spikes all on their own, depending on the mechanic involved. So this week, I want to look at these cards and see what jumps out at me. I wish I could say with confidence that these are all going to go crazy, but at the least, they work well with what each of these Commanders is trying to do.

Greven, Predator Captain is a fun card, very thematic, and someone we ought to hear more from. I like the ability that draws cards and plays into what the deck wants to do. The question is, how can we make this hurt as much as possible? Rakdos cards often focus on the opponent losing life, but there’s a lot of cards that can really pay off for us.

My favorite accessory is even on theme: Hatred. Only costs half your life to kill someone now. Unspeakable Symbol can get you there too, but requires a little more math.

Or, if you’re absolutely sure that no one at the table is playing with Lightning Bolt, then Soulgorger Orgg is your guy. Have a sacrifice outlet ready if you really want to impress. Black and red offer some fun ways to discard/reanimate creatures too, and I will respect you greatly if you pull off the Orgg tricks at instant speed, or even twice in one turn!

Bond of Agony also is good for a laugh, Dire Fleet Ravager says hello, Havoc Festival is truly nutty, and you have both Necrologia and Necropotence to have your life loss lead to more good things.

Doom Whisperer, Erebos, God of the Dead, Kuro, Pitlord, Vilis, Broker of Blood all have fun effects too. There’s a whole deck to be made out of paying life, just be sure you can do the tricks more than once.

Elsha of the Infinite is a Jeskai card built around noncreature and nonland spells, but what are we going to do that’s better than just plain old Talrand, Sky Summoner plus cantrips and spells?

One way is tokens. Mastery of the Unseen is my favorite way to turn the unneeded lands on top of your library into semi-useful creatures and get them out of the way. Sure, you could play Ghoulcaller’s Bell and other such things to just mill them away, but get your value!

The standbys of Soothsaying and Sensei’s Divining Top are going to be very good here, but let’s really dive in. Think Tank is slow, but it does some work as a backup to the really good effects of this type. You know what’s on top anyway, why not arrange things appropriately? Search for Azcanta is going to draw you a lot more heat but is also good. You’ve got to balance power and efficacy here. Yes, Elsha allows you to cast planeswalkers at instant speed but thankfully, only Teferi, Temporal Archmage allows that to give value.

The Mirari Conjecture is an excellent way to regain value off of the instants and sorceries you’re casting, and has that 10x foil multiplier that all the Sagas do:

Off the top of the deck for value means Oracle’s Vault has a lot of potential, but it was a promo and all the versions are cheap, so spec carefully. A much better spec card, because it’s on the Reserved List, is Bosium Strip:

Basically, it’s going to give flashback to any instant or sorcery in the yard for three mana. It’s harder to kill, being an artifact, but the buy-in of only $3 is exceedingly tempting and quite safe since it’ll never ever be reprinted.

Tahngarth, First Mate wants to attack. A lot. So how can we make sure he does so safely, or at least hits like a truck?

Whispersilk Cloak is the clear winner here, but there’s EIGHT printings and four foils. This is going to be hard to make money on, especially because the oldest one comes from a block with crappier foiling. Tahngarth also kicks butt with a Sword of Anything and Anything Else, but I don’t expect those prices to move too much based on his use.

Fireshrieker has potential to kill a lot of players, but at three printings and three foils, big gains are unlikely. Hot Soup, Prowler’s Helm, and Hammer of Nazahn all have potential too, or maybe you want to get galaxy brain and pick up the equipment assistants: Stoneforge Mystic, Steelshaper’s Gift, Stonehewer Giant, and Steelshaper’s Apprentice.

You’ve got choices when it comes to enchantments too, but I don’t like those as much because of the one-use factor. Wrecking Ogre is particularly hilarious though. Be careful about the instants you select, because sometimes, you won’t have control of Tahngarth and things like Temur Battle Rage might not be game over.

Volrath, the Shapestealer is something that cares about counters and while some of these cards have already gone crazy, having the third color of blue allows for some real shenanigans.

Necrotic Ooze is a pet card of mine. Any time we want to do fun things with abilities, this should come along for the ride. Also fun with Body Double. Crumbling Ashes has spiked more than once and yet hasn’t been reprinted. If Volrath shows up on EDHREC as a top new commander, I’d expect this to blast through $10 and approach $15.

Flourishing Defenses is a lot more mana but free tokens are free tokens, especially when combined with something truly busted like Contagion Engine. Double up on the effect with Nest of Scarabs, and thank me later.

Cytoplast Manipulator and Simic Manipulator are a fun way to go if you want to control things instead of destroy them. Beguiler of Wills can be a very fun thing to copy with Volrath too. Finally, the old standby of Cauldron of Souls is pretty great in a deck where putting those -1/-1 counters can be a benefit. Save all of your things as well as the things you want to copy!