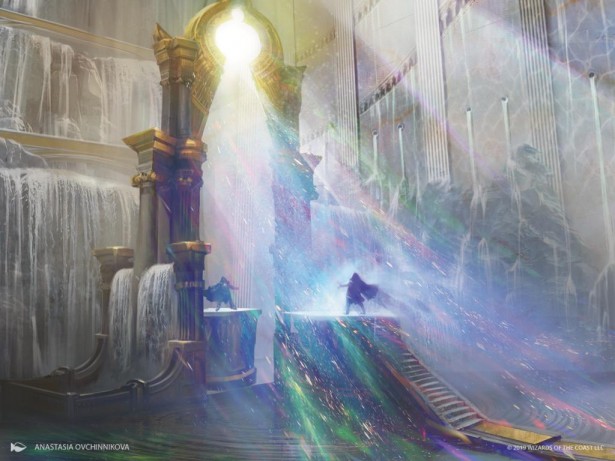 Preview season means all sorts of new goodies, and there are some showstoppers in Thrones of Eldraine.

Today, I want to talk about the dozen mythics we’ve seen, and where they are likely to end up. Some of these are available for preorder, and as I’ve stated many times before, preordering is a bad idea in almost every circumstance. There are a few more mythics coming, and we will catch up with those next week or so.

One other factor I’m noticing: I’m not sure how strong some of these will be in Constructed, but holy hell, almost all of these are going to have powerful followers in casual circles and Commander pods.

The preorder prices I’m citing are a combination of eBay and a couple of other prices. If you find different prices, forgive me or jump on them.

It’s six mana for 10/11 worth of stats, and I can see this being a pretty strong card in assorted token decks. It’s probably not great in Constructed, though flickering it for a pair of 3/3 creatures is pretty strong.

I don’t see this as becoming a lot more expensive. It’s got a high mana cost, multiples are less than impressive, and there are situations where it’s bad. I’m not planning on buying these unless they drop to nearly-bulk prices.

I completely expect this card to be a player in Standard, and it’s pretty amazing in the other formats too. I think a lot of decks are going to try this out as a one-of, a late-game advantage engine. It’s very difficult to land this super-early, but turn 7 or so, a control deck can put this down and still have Cryptic Command open.

Standard is really going to like this too. We don’t have big Teferi to end games anymore, but we do have space open for a card-advantage engine. Being legendary, and a mana cost that is impossible early, it’ll never be a four-of.

I like this card to end up about $7-$10 based on casual demand alone, and if enough decks in Standard (and perhaps Modern?) pick up one or two, that will go significantly higher.

I don’t think there’s a deck waiting for Rankle, but this is a set of abilities worth building around. Being able to make every player do something is a ‘drawback’ that some very powerful decks have exploited. Keep in mind that you can do none, or all three, all on a 3/3 flying haste body. Eight bucks feels high for a legendary rare creature, and I expect this to fall by half or more. Even an aggro deck isn’t going to play a full set of these, but the dedicated combo-like decks will. Commander players will add this to the Faerie decks, but likely not much else.

What this is NOT is ‘draw a card’. You’re getting the ability to conditionally cast the card that was on top of their library. The good news is that you’re almost always going to have less cards than your opponent, since you’re playing a more aggressive build. The timing restriction makes it less hard to break, but much depends on how many cards you need to cast before you feel you got a good deal.

We know mono-red was good before rotation. We are getting some amazing tools for aggressive decks, and this is a card you will absolutely play all four of. In multiples, this is breathtaking to watch, and that’s a factor in the price as well.

What I don’t know is if this has legs in Modern. If he does, if he fits into Burn or strategies like Jund or Death’s Shadow, then this is a $20 card. If not, it’ll stabilize in the $10 range. This is not going to see much play in Commander, even with the difficulties Red has with drawing cards.

My problem with this price is that it’s a legend, and extra copies will rot in your hand. That said, holy crap is this card pushed. To start, it’s a 4/4 for four mana with haste, it’s difficult to imagine anything else (sans deathtouch) being able to block profitably. And even if they have a wall, or a five-toughness creature, it’s got deathtouch! Can’t race it, because it’s got vigilance! Can’t chump block it! And now you don’t have to choose between taking out the planeswalker or attacking their life total!

Planeswalkers have that inherent pseudo-life-gain mechanic baked in when it comes to creatures: Yes, you can attack them but that’s an attack which didn’t go against the life total. Would you play the following sorcery: 1WU: bounce a creature or artifact, draw a card, gain four life. Seems pretty strong, and that’s why Teferi, Time Raveler is so good.

The only drawback here is that the Beast is a legend, which is probably going to stop this from being the most expensive card in the set. I don’t think it’ll hold at $20, but right now there’s a dearth of board wipes. I suspect this will dip a little in price and then climb back up slowly, but never get below $13-$15.

I want to see this card get broken, I really do, but I am doubtful. It’s got a lot of abilities, and is great on an empty board, but it’s fated to be a niche player. $5 feels about right, maybe a buck or two lower.

This is pretty overpowered as Equipment go. It’s giving that magic combination of double strike and trample, and plays a lot like a combat trick which sticks around. I don’t know if the goal here is to stick it on turn three (presuming 3 one-drops to start the game) or if it’s better as a “Surprise! Take ten!” sort of play in a midrange/tribal deck.

If I was preordering, this would be my early pick. Aggressive red decks are going to want to play this card, probably with 3-4 copies, and that’ll cause an early spike above $10.

This is pretty absurd, three mana to plus right up to six loyalty. That’s a lot, and thankfully, these two can’t protect themselves at all. Clearly, this is pointed at a control strategy, but in a UR aggressive deck, the middle ability makes blocking nigh impossible. The ultimate is certainly worth building towards, with a worst-case of draw four and deal four anywhere you need to.

It’s hard to see this as dropping below $10. Three mana is a pretty sweet spot for planeswalkers, and while I don’t think it’ll maintain at nearly $20, the decline will be a slow one.

This Garruk is am amazing finisher, and a clever design. Making two 2/2 creatures as a zero is rather powerful, and making those be the method for gaining loyalty is an elegant design. The minus ability is everything you want in the late game: Get rid of something and get ahead on cards, and the emblem might not be an immediate game over, but it is going to speed up the game impressively.

This feels like a $15 card by the end of the year, but it’s not going to go crazy before then.

Again, we’ve got three mana for what could be six loyalty when it comes down, and that’s solid. Being able to upgrade what you’ve already got into a 3/3 feels good that early in the game, and hopefully you’re not overwriting anything too powerful. The turn four play of “Here’s a Food, now give me that creature of power 3 or less” is going to be delightful too.

This is surprisingly underpowered for such a high preorder price. Oko can’t win on their own, nor solve a problem with power 4 or more. Yes, it can downgrade everything they make into 3/3 creatures but then you still have to remove it. I think the fall will be significant, and the price here will be trending downwards slowly until it hits the $5-$7 range.

If this was not a random choice, this would be a very powerful card indeed. As it is, you’re getting a haste creature of varying abilities, but the combination of that unknown plus not getting a creature until the following turn means that this is never going to be in high demand. It’s neat, and cool in multiples, and an adorable theme, but this is a bulk-rate mythic by itself.