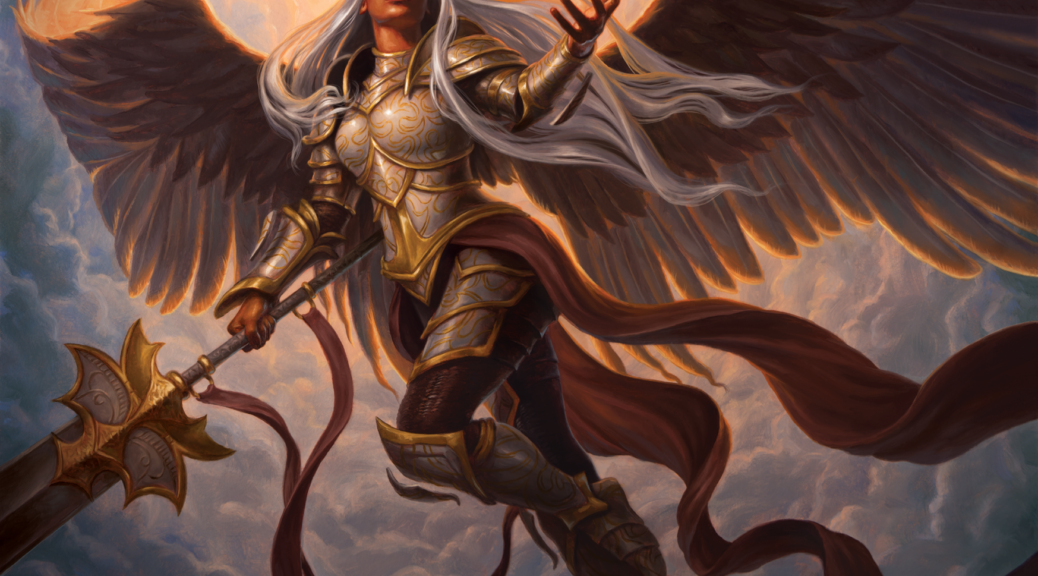 A few hours after this article releases we’ll be getting an update to the Pioneer Banned and Restricted list. I’ve no more information than anyone else, but I’d wager that Smuggler’s Copter and Field of the dead are at the tippy top of the list, and while I can’t be certain they’re both going, smart money is on their exit today. That will unlock a lot of new movement in the format since, at the moment, it’s gated fairly hard by Mono-Black Aggro and the few flavors of Field. Be sure to keep a close eye on the 5-0 results after today, since that will give you an early indicator of what my have gained ground in the vacuum. We’ll check in next week to see what’s blossoming.

I did a double take when a retweet crossed my feed a day or two ago regarding a Lotus Field combo in the Pioneer PTQ taking place. The build uses Lotus Field, Vizier of Tumbling Sands, and Hidden Strings. It’s not a full loop, as encoding Hidden Strings on the Vizier doesn’t do much, since it requires dealing combat damage. Rather, it’s sort of like playing with a fast mana engine. Field isn’t “fast” of course, but once you pair it with Vizier, you’re now getting six mana a turn from one land and one creature. A single Hidden Strings allows you to double dip on both, and now you can make twelve mana. That’s the gimmick, since at that point you cast Omniscience.

It’s no surprise that a land that casts a Black Lotus every turn is going to show up in some Pioneer combo decks. Playing it fairly is mediocre, but once you’ve got any sort of effect to take advantage of it, it’s going to get silly quickly. While the package described above is one way to approach it, I saw some other builds in the 5-0 collection using combinations of Kiora’s Follower and various Kiora planeswalkers to add additional untap mechanics.

Flip over to EDHREC and you’ll find Field in just over 2,000 lists too, which isn’t insignificant at all. It’s quite a new card to the scene, as Magic 2020 has only been on shelves for a few months. Looking at M20 further, you’ll see that Field is the fourth or fifth most-played card from the set. Not all builds are going to be interested in Field for sure, but there’s no color restrictions on it, and anyone trying to capitalize on untapping lands is certainly going to make sure to toss a copy in.

Non-foils are still far too deep in supply to think about today, although I do suspect they’re going to be worth revisiting in the future. As for foils, the supply isn’t low by any means, sitting at around 90 vendors. Prices have been coming down, with the market over $11 and the cheapest copies at $8 or so. We could see these bottoming out in the very near future, with non-foils sitting at $4 or more. That will put foil Fields on an upwards trajectory, feeding both Pioneer combo players and the EDH crowd.

Had I written this article tomorrow, I’d be calling it Two Lands Tuesday. But I didn’t, so it’s still called The Watchtower. Sorry to disappoint.

Cataracts, aside from a problem with your eyeball that old people get, is a useful tool in any EDH deck looking to cast five color cards. Five colorless in, any five colors back out. You pay a mana for the privilege, but generally, the color fixing is going to be worth the cost. Being able to hit those WUBRG cards early and reliably can mean a great deal to those decks, especially ones that can’t come to the party with a $3,000 mana base to ensure they’re always getting there. Tossing a Cataracts in is much more cost effective than scrounging up ten fetches and ten duals.

While I’m sure it’s not terribly common, I imagine that 4c and even 3c decks may occasionally want to run Cataracts. It’s been my experience with 3c decks that I was more likely to be hamstrung on type of mana than volume of mana. Being able to convert some of your Gaea’s Cradle mana into black mana, for instance, could be quite useful.

At $5, foils are tempting. The issue here is the two big walls of about 50 copies each. Those two vendors alone seem to have more inventory than the entire rest of TCG combined. I’d consider this to be superior to those copies being distributed across the seller market, since as $5 copies begin getting bitten from one of the two vendors with deep supply, they’ll begin raising the price, effectively increasing the price on 30 or 40 copies at once. Were those copies distributed, there’d be more copies racing to the bottom. Anyways, $5 foils of a 7,000 EDHREC land are worth keeping on your radar into 2020.

I worked hard to find you guys a non-foil this week. While Korvold has been holding steady as the most popular Throne of Eldraine commander, Syr Gwyn has been quietly putting up numbers back in third or fourth place. As a knight and equipment themed deck, she’s adding demand to two subsets of cards that don’t always see a lot of love. Digging into the equipment theme we find Masterwork of Ingenuity, a once very hyped card that’s been quieter since the initial release, but has seen its stock drain over the years.

Masterwork is, of course, an equipment clone for one mana. Oftentimes that’s going to be a solid mana savings. Pair it with the swath of abilities that allow you to equip for free or at a discounted rate, and you can get some real cheap equipment going. To that end virtually every equipment-based commander finds copies in their lists. The reason Masterwork is still only at 2,200 lists despite having been released some five or six years ago is that there simply aren’t that many appropriately themed commanders released regularly. Syr Gwyn is the latest, and prior to that it might have been 2017? With 2020 the year of Commander, I suspect we may see a new leader pick up the mantle, which would put a great deal of strain on a now-depleted supply.

We’re down to 25 vendors on TCG, and nobody has a deep well of copies. Without any changes a few copies will sell each month, eventually pushing this up towards $10. As soon as another equipment commander is printed, the last of the liquid copies will go, and you’ll be happy you had yours prior to that.