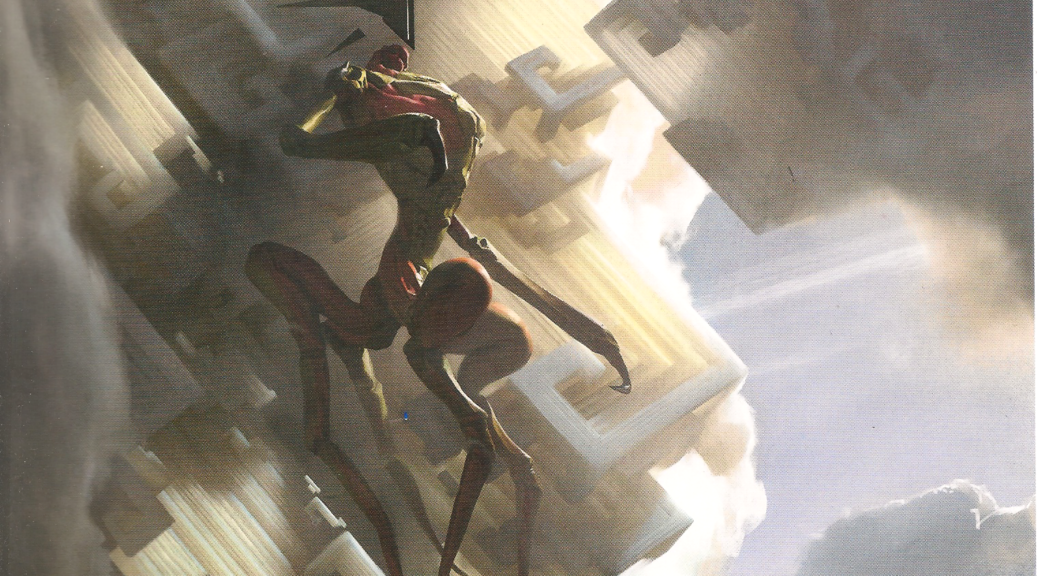 I know I focused heavily on Pioneer a couple of weeks ago, but this week we’re heading into a triple Pioneer GP weekend which means there’s going to be a big spotlight on the format, and we could definitely see some more price spikes. I was planning on talking about Inverter of Truth today, an integral part of the so-called ‘Splinter Twin’ deck with Thassa’s Oracle and Jace, Wielder of Mysteries, but it seems the best action on that has already gone. Never fear, I’ve got some different picks lined up for you to take a look at instead!

Izzet Ensoul was one of the earlier decks to do well in Pioneer – it was fast and aggressive, but also had multiple angles of attack and could close out games with Shrapnel Blast after getting a couple of hits in with an Ensouled 5/5. However, once everyone realised how broken Oko was, artifact-based decks just weren’t a viable thing to be doing in Pioneer. Walking Ballista? It’s an Elk. Darksteel Citadel? That’s an Elk too. Everything’s an Elk. Even you.

But now that he’s gone and the deer have been set free, we’re seeing Izzet Ensoul come back to the forefront of the meta. One of the most powerful and flexible cards in the deck is Stonecoil Serpent – it can be played as a 1/1 on turn one ready to grab some scissors on turn two, but is also great in the late-game when you can pump more mana into it. The best thing about Serpent is the abilities on it, and the fact that people always forget about at least one of them (the number of times I’ve seen people chump attack their fliers into it is quite something). The Trample is great for getting through damage when it’s been Ensouled, and the combination of Reach and Protection from multicoloured makes it one of the best Niv-Mizzet blockers in the format, as well as fading key removal spells like Abrupt Decay and Kolaghan’s Command.

I really like buying the non-foil Extended Art version of Stonecoil here, for three reasons:

1) There are far fewer copies around than the normal versions, and are only a few dollars more.
2) EA cards are one of the most tournament-friendly ways for players to pimp their decks out without using foils.
3) They really do look great.

The EA Stonecoils were once up at $15 due to their use in Ensoul and Hardened Scales, but have since fallen by the wayside a bit. I fully expect them to be able to reach that price point again, and if you fancy foil EAs at $22 I wouldn’t blame you – they’re in even shorter supply and also look fantastic.

Leyline of the Void

Leyline of the Void has had its fair share of days in the sun, most recently during Hogaak’s reign of terror over Modern last year. Incredibly, even as mainly just a sideboard card, it was the most played card at Mythic Championship IV, showing just how powerful it can be against graveyard-heavy strategies. Dredge is still a good deck in Modern, and might be getting better with the inclusion of the new Ox of Agonas from Theros Beyond Death.

Leyline of the Void hasn’t been particularly relevant in Standard, but it’s still a powerful hoser in Modern and has started showing up relatively frequently in Pioneer too. Mono-black aggro is still one of the best decks in the meta, and Leyline is good both in and against the deck. It’s generally seen with 2-4 copies in the sideboard, for the mirror match as well as against other graveyard-based decks like Dredgeless Dredge, Breach Lotus Storm and Golgari Soulflayer.

For a card that used to be well over $50, the reprint in M20 (along with Hogaak getting banned) tanked the price quite a bit, and now they’re sitting at around $9. I think this is most likely the floor for this card, and it’s going to creep up steadily until it’s doubled before you know it. Particularly for Modern and to a lesser extent Pioneer, it’s a card that is mostly played as a 4-of, which means that supply will dry up much faster than an EDH-only card, for example. If you think you’re going to play with this card at some point in the future, pick your copies up now. If you’re not, pick some up anyway!

I’ll round today’s article off with a small-ball pick: Paradise Druid. Yes, it’s an uncommon, but this is a card that’s seeing quite a lot of play in multiple formats. It’s a Standard staple (although that won’t be moving the price much), but it’s also become a key card in a couple of Pioneer decks too. Niv to Light and Ascendancy Combo decks both use it in the same role as Sylvan Caryatid – a hexproof dork that makes any colour of mana. Without Birds of Paradise in the format, Druid is the next best thing after Caryatid, and having Hexproof means that it can reliably survive to produce the mana you need in these four and five-colour decks.

We’re also seeing a small amount of play from this card in a new Standard deck – a Bogles type shell with Setessan Champion. This plus inclusion in around 3000 decks on EDHREC means that a fair few players need copies of this.

As FNM promos go, this is one that a lot of players will slots into one or more of their EDH decks, or complete a set to play with in Standard or Pioneer. This means that there are lots of copies being played with and fewer copies in the hands of vendors, making for a shallower supply. If you grab some of these at $1.50 and give it 12 months, I could see buylists heading towards the $3 range for a nice double up.

That’s all from me this week, and I promise I’ll have some non-Pioneer specs for you next Monday.