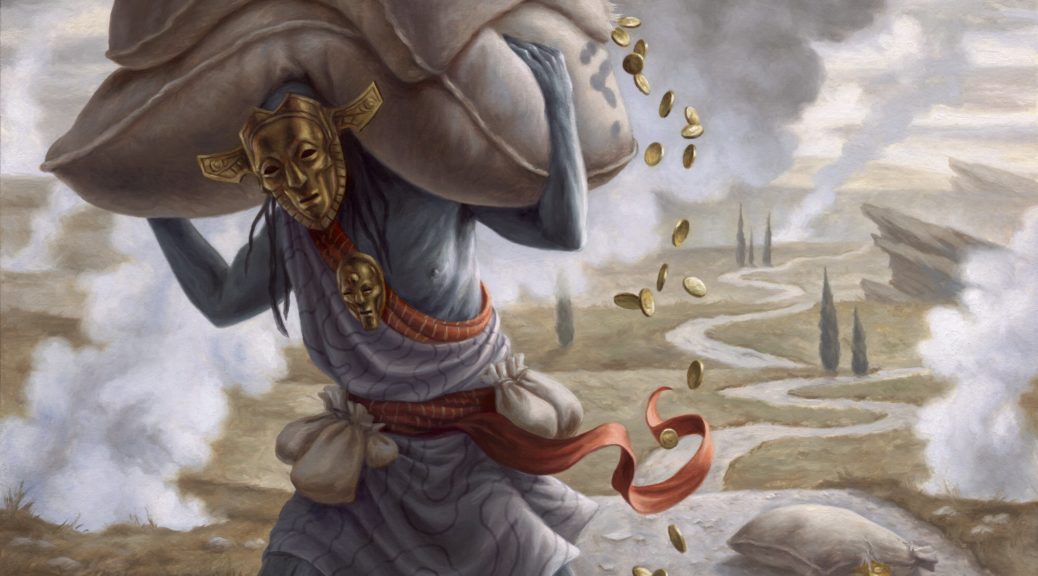 If you were bracing yourself for a second week or musings about Siona, or a boring dive into Simic Goodstuff with a look at Uro, I have news. We’re doing not that. You probably knew that already because of the picture and description and first paragraph and hopefully you check EDHREC by yourself by now, but still, I’m going to pretend I buried the lede here, so play along. There’s a new Sheriff in town and he has two mouths, I think. Not really sure what’s going on with the art but what I do know is that Siona was unseated. Take that, uncommon.

Siona is still ahead in absolute terms on the strength of a good week one, but there’s another place we need to look, and that’s the Top Commanders of the Week where Siona just got passed up.

This is super fine with me because I actually really want to talk about Kroxa, having just brewed with him this week. Here’s what I think matters.

It’s pretty clear I dropped the ball and missed the nice reverse-J shape we love. This has gone full u-shape, except it’s threatening to go higher than it was before the reprint. A lot of decks are making good use of making them discard. Waste Not was in Entropic Uprising, the Yidris deck that had a ton of good cards in it and if your Target is like mine and randomly restocks the old decks, snap these off. Basically any 4-color deck is good but Yidris had Burgeoning and Vial-Smasher and Thrasios and all kinds of other value-laden cards. A card in a precon that just sold for $80 on eBay might as well not have gotten reprinted. Waste Not is a $10 card that doesn’t know it’s $10 yet and if you can scoop these around $5 on TCG Player, it’s a no-brainer. Curiously, MKM is bought out under 7 Euro which surprises me considering this is an EDH-only card. That said, this is really strong, and while reprint risk is there, it probably shakes that off, too.

A card that has demonstrated a willingness to flirt with $12 should be respected when it’s gettable around $6. This is a strong card – perhaps too strong for an EDH precon that’s designed to get new players interested in playing the game. That lack of reprint risk makes me feel more secure about the future of this card. I’m not sure if this is the floor but it’s definitely not the ceiling so worst-case scenario, this drops another couple of bucks. If it does, I buy a bunch more copies until I’m happy with the average price I paid then I get out when this crests again, which it will do.

GG is an uncommon but it’s old enough that there are fewer copies of Grimoire than there are mythics from Kaladesh, so I’m happy to buy in at $2ish considering this recently flirted with $4. There has never been a better Grimoire deck than Kroxa, not even Nicol Bolas, the deck that made it go up last time. Second spikes are harder and with all of the cheap copies in the hands of dealers, people will have no choice to pay retail on these. I like it at its current price for sure, especially since it’s better in Kroxa than it was in Nicol Bolas.

If you remember last year, I used to really like this as a spec. I still do, but I used to, too.

Bummer. We missed this boat on this for sure since all of the regrowth happened in the last 12 months. Could this go higher? For sure – Planar Chaos was a profoundly bad set so it didn’t get bought much and I bet cards from it are pretty rare. This is a meme card and I wish I had collected more of these back in the day.

Ultimately, you’ll be able to look at Kroxa’s page and find a few cards of your own. If you have specific questions about why I skipped something you like, hit me up in the comments or, if you don’t want to tip others off, message me in the Pro Trader Discord group. That’s it for me – until next time!