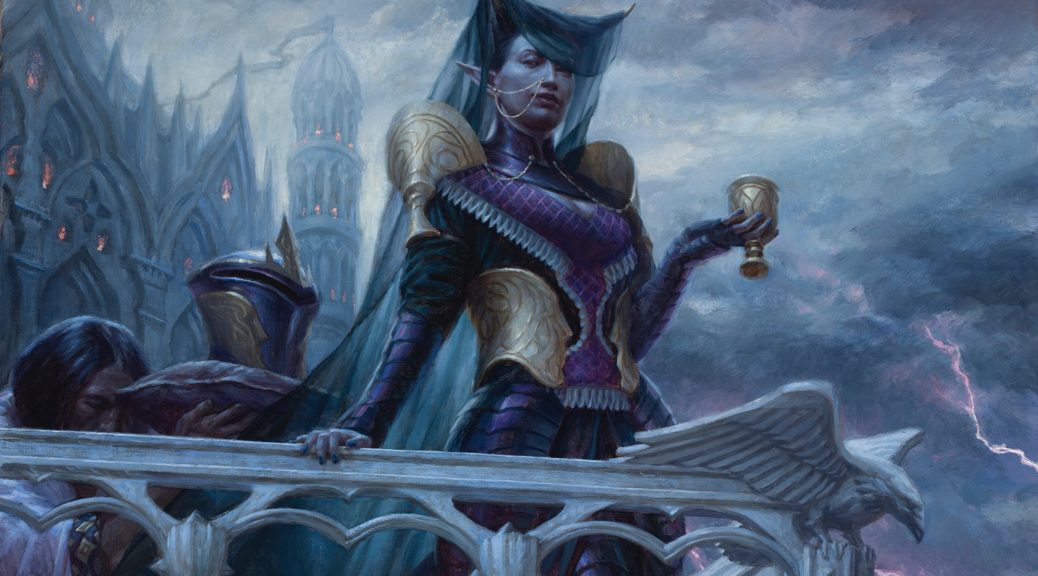 I’m really not a fan of the huge lag between the reveal of cards and the time when they can begin shipping. I also don’t enjoy that I can’t do paper drafts during prerelease weekend, or the time after prerelease. Making me wait a whole week for updates to my Commander decks, my Cube, and anything else I have going on is just plain cruel.

And now that I’m done yelling at clouds, let’s look at the things that jumped up in price this week!

Before we get too deep, there’s some caveats to make about these prices. Since it’s only allowed to ship these starting today, the TCG prices and the other vendors aren’t in alignment. Also, some prices have changed since I reviewed them Thursday evening. Please, be kind.

I liked Elspeth last week at $7 but I should have seen Ashiok as the finisher in UB control or some Esper build. I’ve had the privilege of losing to this card in Limited, and I love any planeswalker who gets a card from the plus or the minus ability. It’s not difficult to get them into the ultimate range, and while I don’t think it’ll hold at $17, this is a nice bump and a sign that the format isn’t too aggro yet.

Speaking of finishers, can I interest you in a Time Wipe or bust? I’ve won Limited games with this, and I won’t be shocked if it’s the finisher du jour in formats besides Standard. You’re gaining five on the attack, plus the extra card. It’s very difficult to beat in combat, it’s extremely difficult to race, and that mana requirement is the only thing stopping this from being $10. Decks aren’t playing a full playset of this (yet) and that’s to be expected on a six-drop. I think this price is going to recede to $3 or so, but more likely is that everyone starts playing the heck out of this card and it pops to $7 this first weekend. It’s very difficult to make money on a short term jump like that, I don’t recommend you try.

Look, you can name your own combo with this card. It’s not difficult to figure out the game state that ends up with you victorious after a certain amount of silliness. Commander players eat this up, and let’s not overlook that we’ve not got this bad boy and Jace, Wielder of Mysteries in the same Standard. I’m exceedingly leery of trying to make that work when Murderous Rider and Mystical Dispute are everywhere, but I appreciate the optimism that people are showing.

I do not think the Oracle can hold $4 long-term, but what I’m going to be watching is the price of the EA foils. Right now those are in the $80 range on TCG, and supply is appropriately tiny. “I win the game” cards always have a certain cache to them, it’s a challenge that a large number of people can’t ignore.

There’s a Bogles deck in Standard! Thankfully, there’s only one real hexproof creature in the deck, not two, but this deck will wreck your face if you’re not prepared. Season of Growth plus this card is a card advantage nightmare if you don’t have the right tools, not to mention the Alseid making everyone hate the little 1/1 for 1. All that Glitters is a superstar here, you’ve got a Rancor replacement in Setessan Training, and really, be thankful that there’s nothing else in this environment with Hexproof under five mana. Be very aware of this card, because if there’s anything with hexproof in the next four sets, this is an automatic four-of and will jump in price accordingly. I’m not buying now, but when it settles back down, I’ll be considering buying a brick of them for later buylisting.

It seems inevitable that someone will break this card. Yes, it’s infinite milling with Brain Freeze and Lion’s Eye Diamond as long as you mill yourself a little. You’ll buzzsaw their deck first. There’s three Extended Art foils under $60 on TCG and I think that’s good value, especially with the ramp up to the $80 range. I also think this is easier to abuse than Thassa’s Oracle, so we will see where the relative values land.

Going up to $5 is no big deal at the moment, but when word breaks of someone who crushed a PTQ using this in some weird combo, it’ll jump again, hard. Happily, as a key combo piece, it’ll always be a four-of and you’ll be selling these by the playset instead of just the singles.

I also like the flipside of the card’s potential: If it does nothing for the next three months, then it’ll be dirt cheap when Ikoria comes out and I can vacuum up lots and lots of copies.

Finally, the mayor of valuetown. I don’t know if I have the courage to play this in a Commander deck, but I would certainly love the feeling of knowing I’m going to get all my triggers all over again. Your combo choices are many and plentiful, in Standard and elsewhere. The favored thing to do will be to curve Ayara into this and then Gary the Grey Merchant, which should end the game relatively easily. Don’t forget that it’s a 4/4 flier for four, with no drawbacks at all. No random discards, no “you can’t win the game,” or other such problems. Just a steady and delicious stream of unending recycled creatures for maximum value. Korvold’s new best friend.

One more thing about Theros: I’m not picking up the foil lands yet, because I want to see what the supply will be like. Right now, they are going for $6-7 on eBay in foil, and that’s kind of absurd. The early box openings are showing that there’s just one or two foil lands per box, and if enough people dump copies down into the $3 range, I’ll be listening. It doesn’t matter if you like the art personally, don’t let that get in the way of the profits to be made.