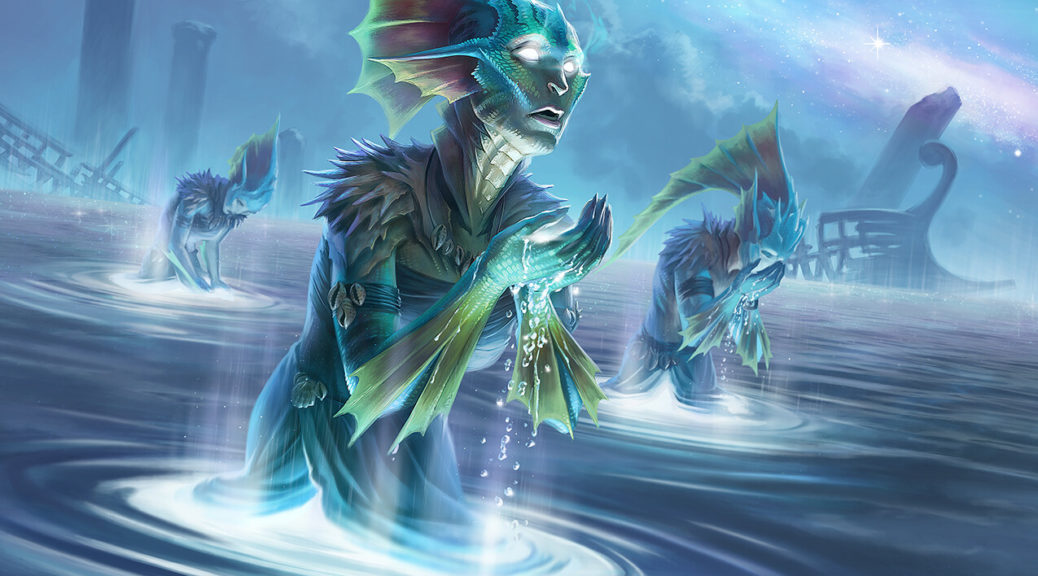 I know it’s a crazy time in the world, and one of the things that gives me comfort is knowing that there will always be Magic in some form. People are playing Commander games with Discord’s help, trading via mail remains a lot of fun, and it’s always enjoyable to pick up undervalued cards.

We are about two weeks away from the previews for Ikoria: Lair of Behemoths, and this is when we want to examine the set that’s closing down for the good buys at max supply. Traditionally, this means cards are at their cheapest, and any bit of play they see from here, especially in Standard, means an uptick. I like knowing that I have about a year to unload Theros: Beyond Death cards before they are in danger of losing value due to rotation.

First things first: I’m going to be talking about the regular nonfoils mostly, except for one or two specific cards. Foil prices at this point are remarkably in line with the nonfoil prices, because the players who want unique versions are going for the special version (extended art, frameless, constellation) or the foil version thereof.

These are picks with an eye towards Standard, but if a card has uses in other formats, all the better!

Thassa’s Intervention ($1) – There’s two decks in Standard that are giving this some love: Temur Reclamation and Azorius Control, and it fills a similar role in each. The modes here are either to prevent your opponent from doing something good, or if they decline to play things into your open blue mana, you get to dig for two good cards. That’s wonderfully flexible and this is going to go up. Three bucks is quite doable, but I’m hoping for $5+, so I could buy at $1 or less and buylist them for $3 plus store credit bonus.

Phoenix of Ash (75 cents) – Another card at near-bulk prices, it’s a good, recursive threat for whatever flavor of aggressive red deck you want to use. The core of such decks is pretty intact for the next 15 months, with just about all the best cards being from Throne of Eldraine, aside from Runaway Steam-Kin and Light up the Stage. The good news here is that decks want to play lots of copies, as extras are fine in play together or fuel escape for one another. You can get playsets for $3 or less, a price that turns around quite nicely when this sees more play.

Calix, Destiny’s Hand (Showcase Foil) ($5) – Calix is a long-term pickup, because he’s absurd in Commander decks that are enchantment-based. That’s a relatively popular subtheme, and as time passes, better and better enchantments will be printed. His price can’t really get any lower, and while you can get the original for near-bulk prices, go for the Showcase foil and really drive some wonderful returns. There’s currently 158 vendors on TCG, and yes, that’s a lot of copies. This is for the long-term and doesn’t cost much. If you like this theme of deck, definitely get your Commander copies now.

Ashiok, Nightmare Muse (Showcase) ($7) – I think Ashiok’s newest version is really underplayed, given the synergies involved. Currently they are only seeing play as a fun-of, but I like the inevitability and the speed of milling you can get with the Nightmare tokens. This is a less sure spec, but given the power of the card and how perfectly this fits into the average UB control deck, it’s hard not to love. I like getting the Showcase nonfoils in hopes of Standard players wanting to rebuy these for $15+ sometime in the next 12 months.

Shadowspear ($5.50/$7/$11/$36) – Whatever version you want to buy, there’s a case to be made. For a card that’s only been out three months, this is already in nearly 3000 decks on EDHREC, and it deals quite effectively with the two qualities that are most annoying in Commander. I could see this being played in any deck that wants to get around these protective qualities, and even though it’s seeing zero Standard play, the price has stayed constant for nearly two months. It hasn’t had a chance to go down in price. Copies aren’t being sold to vendors, players are keeping the ones they get and trading/using them. Since we are at max supply, it’s time to get your copies and a couple extra besides.

The Temples (between fifty cents and $2) – I strongly advocate that you get your playset of each Temple right now if you’re a Standard player. These are good lands with a notable bonus to make up for the lack of speed, as scrying away something you don’t want is quite a lovely feeling. The UW one is the most expensive, as that color combination lends itself naturally to slow control builds, but UB is not far behind. The other three are noticeably cheaper, but the supply that already existed from each of these isn’t really a consideration. Once the shocklands rotate, these will be a strong contender for the must-have lands. If you play Standard, get them while they’re cheap and you won’t have to pay $3 or $4 each in a couple months. As specs, you’re hoping they get to the $6 range.

Storm Herald (a quarter) – This is pure speculation but when it’s so cheap, it can really give you some amazing returns. Mark Rosewater told us this week that Ikoria has the biggest power/toughness boosting aura ever. Eldrazi Conscription gave +10/+10 and while it’s possible that as a troll they give us an Aura which grants +0/+21, that seems pretty far out there. What’s going to happen is that people will immediately try to build around something obscenely powerful, and Storm Herald is a natural fit, there to clean up and get one more hit in after something happens to the original plan. You goal here is very simple: Buy these cheap now, and when this new aura is spoiled, sell into the hype, hopefully getting $2 or $3 each. You’re more likely to make sales on eBay or TCG, so price aggressively and get your profits locked in.