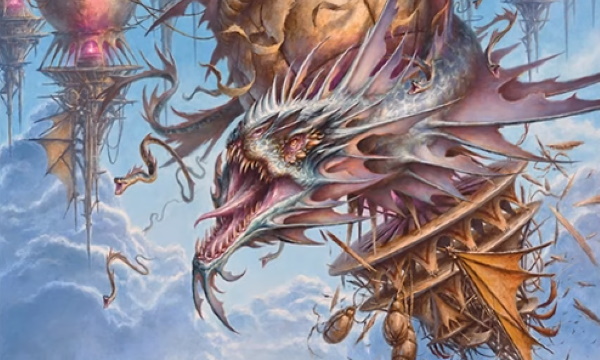 Is it cool if I spend some of my opening paragraph talking about something that bothers me a little?

You got snakey boi over here, and he has flying, and that’s cool. He hangs out in a place called Bespin, which is a city that flies for some reason. There are a bunch of spires hanging down for people to pop out of if they happen to fall off of one Bespin’s many catwalks with no handrails and slide down a giant tube full of trap doors. That’s fine, but when your opponent draws extra cards, something that happens ALL THE TIME in commander, Xyris births a snake. This snake is Green, it’s 1/1 and it does NOT have flying. So Xyris farts the token out and I guess it falls out of the sky, accelerates at about 15 meters per second per second and impacts the earth? Kinda messed up. This is why I don’t get into Vorthos, there’s too much that’s implied by the art that I find disturbing. What I DON’T find disturbing is the amount of value this card generates.

Hitting them with a dragon is fairly easy to do since it costs 5 which is a turn 3 play in a Temur deck. You draw cards, make them draw cards, make snakes and make the snakes make mana. It’s dirty but that’s how the card is designed and I am not inclined to argue. Making them draw cards is also fairly easy, and Commander 2020 has a copy of Windfall (In the Jeskai deck) and The Locust God (In the Jeskai deck) and Magus of the Wheel (In the Mardu deck) so you can do really silly shenanigans right out of the box if the box is three boxes. I think people are going to quickly figure out how to make this deck brutal and since we already have EDHREC data, we don’t have to guess.

This deck is actually sort of boring to me already. I’m going to build it, but it’s so linear it’s going to bore me, so I might as well make it the deck I play when I want the pod to be miserable. We know how to make people miserable, so how do we make money?

FF over here dropped from about $20 to about $10 with no change in supply. This won’t be a second spike but it will be a case where there are no cheap, loose copies in LGS bargain binders – prior spikes concentrated copies in the hands of dealers. The supply is the same, the demand is back up and these $10 copies likely become $20 in the near term, letting you get out if you got in early enough. TCG Player is mostly shut down and everyone with these at $10 has 1 copy which means you pay a lot of shipping costs. I had to buy on Card Shark, that’s how few copies there are easily accessible with so many retailers shut down. Check Amazon, eBay and other, smaller stores for cheap copies and be ready to sell these when people finally get their hands on the precons. This is a slam dunk.

Now, will cards in Xyris be good at all? Last week Xyris was the most expensive card in the set and it’s currently on par with the other most popular commanders built on the sites we scrape.

Kalamax may be currently more popular but Xyris is more linear and it’s going to spike more cards that spiked before so it’s worth doing first since you have weeks to pick the stuff up.

In addition to Forced Fruition, which goes up often, here’s another card I used to pull out of bulk boxes and which keeps making me money like clockwork.

This was buylisting for $15 a year ago so enjoy the free value. This likely goes up again from Xyris, and if it doesn’t, it will again someday. There are just too many ways to make a card that makes everyone draw a ton of cards go up in price.

COVID sort of nerfed the effect they expected from Mystery Boosters since supply is out there but no one that didn’t buy packs can access it. It’s going to spread out the effect of the new supply, but the price is already down to $12. I don’t know if it will go much lower since people won’t be competing with each other that effectively to race to the bottom, so the price may settle around $12. If it goes even lower, just buy twice as many copies again to bring the average price down enough that you aren’t mad at me for saying to buy around $12 and watch it go back to $20+.

Are you into penny stocks? Here’s one for you. This has already flirted with $2, I think this could hit $3 fairly easily and is gettable for far less, although not every Xyris deck is about that snake life. I’ll probably play it in mine but I plan to use the snakes to make mana with Cryptolith Rite so this could dome people pretty good. Xyris is a snake, remember, so this could pretty quickly help deal 21 commander damage. This isn’t in every deck but it could be in enough.

This has gone about as low as it’s likely to, the buylist price is not decreasing and I think less Modern Horizons was purchased than people think. I don’t know if Xyris is enough to double this up, but I bet time, other formats, the copies starting to dry up on platforms where only a small portion of the usual sellers are operating and other factors can conspire to help this hit $10.

Barring a reprint, this is a $20 foil eventually. Yank the non-foils out of your bulk while you’re at it.

A second spike on this could potentially beat the previous high score of $12. This is in low supply, dealers have all of the copies, it’s sort of absurd in this deck especially, 6 mana isn’t a huge deal for Temur and this even pumps Xyris. Commanders that are encouraged to attack getting passive buffs is way more powerful than people imagine – this turns your 7 turn clock into a 5 turn clock on its own. Add Kaseto and it’s even faster.

The rest of the page is worth looking at, also, but these are the cards my gut tells me are the easiest to make money off of. If you’re interested, here is my list from Coolstuff this week which goes in depth into the cards I’d use to make the deck run. If you don’t have the time, I like using Earthcraft, Cryptolith Rite, Opposition and other enchantments to make the most of my snakes. Next week I’ll be back with specs from whichever deck is the most popular on EDHREC because boring works, turns out. Until next time!