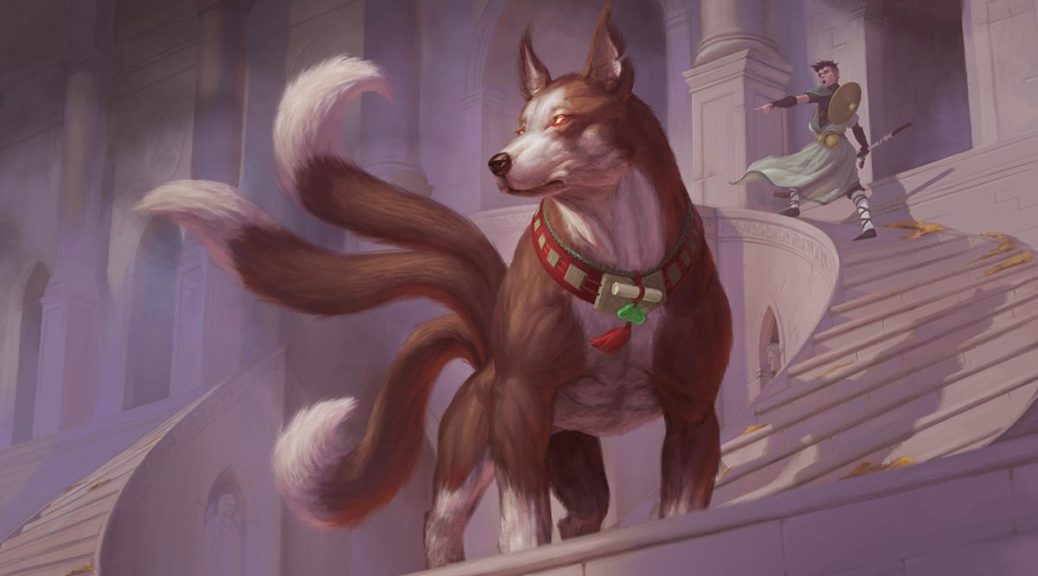 Social distancing is of the utmost importance right now, and yet everyone is running around with Companions? What’s going on??

Jokes aside, it looks like some peoples’ fears over the Companion mechanic being broken might not have been unfounded. Lurrus of the Dream-Den is EVERYWHERE, and Gyruda, Doom of Depths has actually been temporarily banned from all formats on MTGO because of a bug with its interaction with Leyline of the Void type effects – you should be able to return cards exiled with its effect but Magic Online isn’t letting you. On top of that, we’ve seen eight out of ten cats Companions top 8 online tournaments across all competitive constructed formats. It’s clear these cards are busted.

The Standard Aristocrats deck has picked up a lot of new and powerful tools with Ikoria. Lurrus of the Dream-Den is obviously great and doing some crazy stuff all over the shop, but other cards like Fiend Artisan, Whisper Squad and Call of the Death-Dweller are putting in work too. A couple of different flavours of the deck have been tried out so far, with both Orzhov and Rakdos showing promise, and Kroxa is proving to be great in builds including red.

Kroxa fits the bill to play Lurrus as your companion, which is the first thing we need to be able to check off here, and so coupled with Lurrus you can be casting and triggering a Kroxa every turn without the need to Escape it. That’s some serious value, and doesn’t even take into account the fact that you might have a Witch’s Oven or Priest of Forgotten Gods in play.

Kroxa has already put up results over the weekend in Team Lotus Box’s Standard tournament, making a top 8 appearance in a Rakdos Aristocrats build. Although it doesn’t have quite the pedigree of its associate Uro, Kroxa does see a reasonable amount of play in Modern too, showing up in Jund and Death’s Shadow builds. This mythic from Theros is already seeing some upward movement and will be over 20 tix in short order, and I don’t think 25-30 is unreasonable.

Now onto quite a different card in the Ozolith. This hasn’t been seeing any standard play as far as I know, but it has been showing up in Pioneer. Hardened Scales is a deck that somewhat fell off the radar when Once Upon a Time got banned in the format, but this one mana artifact has given the deck new life. Lurrus (how many times am I going to have to mention that card?) has also been working some magic for the deck as a Companion, and combined with The Ozolith I think the deck really has some legs again.

In a Scales deck, The Ozolith just acts as a store for all of the +1/+1 counters from any of your creatures that die, and combined with Lurrus it’s a recipe for large, repeatable threats. Throw a Metallic Mimic in the mix and you can really start going crazy!

The Ozolith is fairly cheap online at 1.3 tix at the moment, and although it might be a bit of a narrow card, I think it has a lot of potential. It might even breathe life back into Modern Scales – although Mox Opal is no longer a part of the format (RIP), The Ozolith can do some serious work with an Arcbound Ravager, making for a very quick kill with an Inkmoth Nexus. A slightly more speculative pick, but there’s no doubting the potential of this card.

Speaking of Modern, let’s have a look at what has been doing well recently. A couple of weeks ago I talked about Klothys with regard to the RG Midrange deck that has been popularised recently, and since then its metagame share has only gone up. Alongside Bant Uro and Niv to Light, these midrange decks are appealing to Magic players because they get to play a lot of Magic with them. It’s good old creature-based interaction, served with a small side of land destruction – just as Garfield intended, right?

Whether or not you’re a fan of this type of deck, it’s the most popular (and likely the best) thing to be doing in Modern right now. Combo decks are seemingly out of the picture for now (although that still hasn’t stopped Caleb Scherer top 8ing with Storm), and midrange is king.

Anyway, back to talking about this RG deck – Seasoned Pyromancer is one of the key value engines in the deck, providing card selection and extra bodies on the board. Since the Modern Horizons flashback draft the other week, Pyromancer has actually bottomed out slightly more and is now down to 19 tix, from a high of 30 less than a month ago. It’s a mythic and so supply is on the lower side, and with the increased popularity of this deck I expect to see it back up to 30 tix in the next couple of months or so.

Go and buy Lurrus. Do it. Then sell it sharpish before it gets banned in everything.