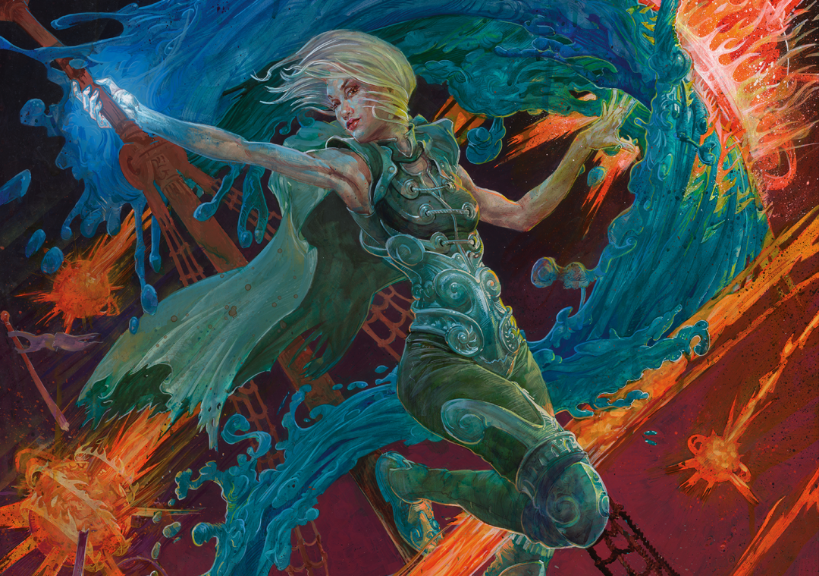 It would hardly be Double Masters if I didn’t do two articles on it, so this week I’m following up on last week’s picks with another set of Double Masters cards that you should be picking up sooner rather than later. As expected, we saw prices fall hard over the weekend as people cracked boxes and started the race to the bottom. Some prices (especially box toppers) have already started moving upwards as people pick up the cards they want, but we might see prices deflate again slightly as this week progresses and more product gets opened and listed.

Supply of Double Masters product – in the US at least – seems to be somewhat stinted compared to previous Masters sets, so today I’m going to be focusing on arbitrage opportunities from Europe. Prices on MKM are much lower than they are on TCG right now, more so than we’d normally expect, so this article is mostly one for European speculators and people with arbitrage contacts.

Toxic Deluge is one of the most powerful boardwipes you can play in EDH, because of its innate flexibility and the fact that you start on 40 life. Since its original printing in Commander 2013 we’ve only seen it once again in Eternal Masters up until now, so supply has always been on the low side whilst demand has remained very high. 28k EDH decks is nothing to sniff at!

Before its Double Masters reprint, Commander 2013 and Eternal Masters copies of Toxic Deluge were pushing $35. Now down to $11 on MKM makes for an insta-buy in my opinion, as I think it’ll be all too easy for this card to slide back up to $25 before long, and possibly towards $30 before it sees another reprint. The $18 copies on TCG aren’t too enticing at the moment, but if that pushes lower this week or next I can see picking $15 copies up a decent option.

I really like the box topper foils in Europe too; they start at €30 ($35) which definitely seems way too low. The $50 box topper foils in the US are probably fine too, but again I’d prefer them closer to $40. Either way I think they have a shot at $70-80 within 12 months or so, but supply of the cheaper foils isn’t too deep so not many people will get a shot at them that low.

God I wish the EDH Rules Committee would ban this card. It’s so egregious. But failing that, I’m going to keep making money on this card as long as it’s legal in EDH. Cyclonic Rift is the second most popular blue card in EDH, ever, losing out on the top spot only to Counterspell. I don’t really need to explain how powerful or how popular this card is, because chances are if you’ve ever played EDH then you’ve either cast Rift or had it cast against you.

With a pedigree like that (94k EDH decks, 43% of all blue decks etc…), it’s no surprise that this was a $40 card before the Double Masters reprint. Down to $14 in Europe now, you could try for an immediate flip in the US, or hold longer and wait for US prices to move further upwards (even if they go down first). Same as Toxic Deluge, I like cheap box topper foils of this quite a lot. I love the new art for this one, and they’re as cheap as €36 on MKM which has to be a snap buy.

It’s worth mentioning that this could be a target for another printing in Commander Legends later this year (should be November/December time), but even given that I think there’s time to get in and out of this before then with good margins.

Mana Crypt is always too cheap in Europe, and despite Wizards giving us two different printings of the card this year alone, the price remains high in the US. After close to four years without a printing, the Mystery Booster version earlier this year (plus Convention Edition copies from last year, I guess), brought the price down below $150, and now with a Double Masters print we’re seeing sub $100 prices for the first time in forever. This smells like a great opportunity to me, as I think it’s quite likely to dodge a reprint in Commander Legends, due to EV reasons as well as the double print already this year. There is a small risk there, but I’m hedging my bets that it won’t be in.

43k EDH decks, 10% of all decks, blah blah blah you know what I’m going to say at this point. This is a slam dunk to flip from Europe to the US, so get in on the action whilst you still can. If we don’t see this again in Commander Legends, I expect it can probably hit $150 before it’s printed again. Of the upcoming sets we know about, I can’t see it making its way into anything else any time soon, so we should be fine for a little while.

On the box topper versions of this, I’m less of a fan than I perhaps could be of these ones. I think that the art isn’t as good as the regular art, and the price difference between Europe and the US isn’t quite as large as it could be, so I’m sticking to the regular copies for now. Another thing to note is that regular Double Masters versions will most likely be more popular than Mystery Booster copies, because people don’t seem to be a fan of the MB symbol on those cards. This will mean a higher price point for the Double Masters copies down the road, so keep that in mind.