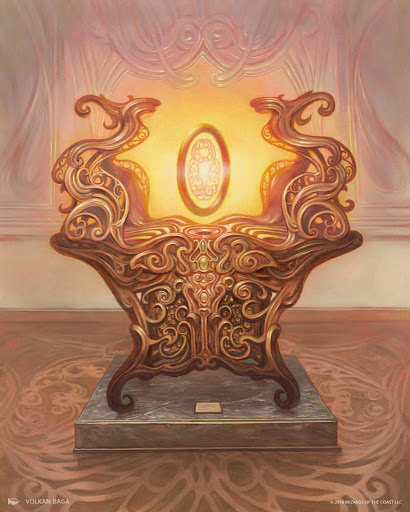 Our attention has been focused on the new thing, Double Masters. It’s about to be focused on the next new thing, Zendikar Rising. But with so much attention of the rising or the falling of Box Topper prices, I’ve seen a lot of prices for Masterpieces as examples. Some of these cards have fallen quite low from their peaks, and it’s time to consider picking a few up.

I’m going to be summarizing current prices given TCG and eBay, so if you see one cheaper than the price I’ve listed, feel free to grab it for your collection. I’m also going to be listing the highest price I can see on graphs for the card, so we know how far it’s come down.

Lightning Greaves (Currently about $90, off from a peak of $150 in March 2019) – I’m really big on the Box Topper version of this, which can be had for $15-$25 depending on where you are and if you like foils. But when I was comparing the most premium versions, I remembered the time in 2019 where this spiked, from pure scarcity. They just announced another premium version in the Secret Lair with dog-based art, and clearly that will have the Corgi market locked up.

Even with all that, you can get this version with the sweetest frame for under $100, and that is enough to have me trawling Facebook for people selling their copies. If it came down another $10 with the two premium versions coming out this summer, I wouldn’t panic. Inventions are more about personal use than heavy speculation, they deserve to be shown off with this gorgeous frame.

Solemn Simulacrum (About $80, off from near $200 in July 2017) – While I’m not a huge fan of how the art tends to lean into the ‘Sad Robot’ nickname, I can’t argue that this is clearly the most premium version to be had. There’s no other version that cracks $20, which is pretty amazing given that it’s in 20% of all EDH decks built online. This summer’s EA foil is just $10, which also feels incredibly underpriced.

Still, being able to get this under $100 would feel quite nice, and represent a pretty safe place to park value. In addition, there’s not a lot of copies out there, and the ramp on TCG is about two pages deep before you’re in $120-$150 pricing.

Gauntlet of Power (about $55, from $150 in April 2018) – Yes, it’s strictly worse than Caged Sun, and that’s why there’s been no reprints of this card since Time Spiral. Still, this is super powerful in mono-colored Commander decks and there’s not a huge inventory out there.

Planar Bridge ($60, down from $140 in April 2018) – There was indeed a time when there was a run on Inventions, and later on, a run on Invocations. I fully expect that in a couple of years there will be a run on Box Toppers in the same way. Planar Bridge is a great way to utilize mana in a combo turn, and being this cheap is something that won’t stand. Even the original was a mythic in a small set, with no reprints at all yet.

Steel Overseer ($40, down from $100 in July 2017) – You can’t convince me that this is as good as Ornithopter. The 0/2 flyer is MORE expensive than this Tempered Steel payoff. It’s only in about 4000 Commander decks, and that’s surprising to me. This effect is super-powerful, though, and scales out of hand incredibly quickly in most artifact decks. I feel like this should be at least $20 higher, and that means you should at least grab this version for your deck while it’s cheap.

Champion’s Helm ($35, down from $75 in April 2018) – First of all, let’s take a moment and assess that this card has been printed twice. First in Commander 2011, and then as a Masterpiece. The nonfoil from ten years ago is $17, and this is the only other printing. Currently there are 11 copies TOTAL on TCGplayer, only two of them nonfoil. Despite being in such super-limited quantities, it’s still in 3300 decks online. It’s overdue for a reprint, and when it happens, you’ll want to have this version ready to sell into the mega-hype.

There’s one more thing you need to know about the Inventions: They are almost all cheaper in Europe. The Commander demand is not as strong there, and if you’ve got the connections then you should make use of them. On average, Inventions are about 15% cheaper in Europe because of that decreased demand. I think these are good prices here in North America, and worth picking up. Understandably, if you can get in even lower, then you should. That’s basics but sometimes it helps to hear it again.

If you don’t have a friend in Europe, then may I suggest heading over to our ProTrader Discord channel and making a new friend? We’ve got a lot of international friends, and this is one of the best ways to maximize value.