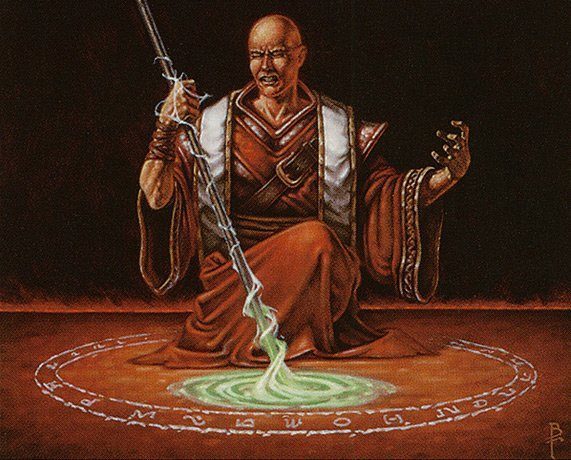 I publicly judge Magic cards on their ability to drive prices. If they can start cheap and get more expensive later, and if my expertise allows me to see that before other people, cool, I guess. But if they drive a bunch of other prices, even better. Publicly, that’s what I’m all about. Silently and internally, I judge Magic cards by how stupid their names are. Cards like Vorel of the Hull Clade sound like someone put a bunch of words through google translate. Is a hull a thing? Yeah, and so is a clade. Do those words in that order sound like Ra’s al Ghul got his Babel machine working and pointed it right at WotC headquarters? Also yes.

Here’s another name that sounds like complete word salad.

This is not fun to say and I don’t know why they name Magic cards like this. Is the card fun in all the ways that count? Yes, and now it’s time to count those ways.

It is not important that you be able to see exactly what is going on in this picture. In fact, let’s focus a bit more.

Here are the top 3 decks this week. Yes, there are more Araumi decks than Yurlok. I think the financial opportunities are a lot like the tide – dead. I think there is more unexplored territory in the Yurlok deck and I’m going to focus on it. You’re free to scour Araumi yourself but I think there is more set to pop that hasn’t yet in Yurlok and it’s my article so get off my back already and let me do my job, rhetorical device I’ve employed to explain why I’m skipping the #2 deck.

Torbran and Obosh spent the last year doing for this card already but in case you didn’t find out that these were cash money, they’re probably not done going up. I would have preferred that we had a blank slate coming in and we could pluck these out of bulk boxes but with so much of 2020 having been spent indoors, it’s possible any LGS with un-inventoried boxes has these for like a quarter. I think this can hit $7 but I wouldn’t pay more than $4. Find these in your bulk, I know you have a bunch, we all do.

We used to have more time on bulk rares like this. This has largely been discovered by the finance community and the fact that this was $4 yesterday and is $8 today shows that we can’t wait like we used to be able to. I think these are findable and I also think they won’t maintain $10 or above because it’s only good in this deck, but smoke ’em if you got ’em.

I included Overabundance to sort of contrast with this next card a bit. Someone who doesn’t play EDH but understands the finance game will see a card like Overabundance, realize it was practically made to go into Yurlok decks and buy a bunch. That person doesn’t need EDHREC data to do that. But EDHREC doesn’t make the news, it reports the news, and nearly as many people are putting Tectonic Instability in their decks as are putting Overabundance.

However, Overabundance is a card that’s obvious to people who don’t play EDH and Tec Instability is a card that people who are building the deck will eventually figure out when they sit down and start to try and come up with 100 cards to play. I’m not saying any one card is better than another, but one of them is a cheaper buy-in right now and still has copies lying around despite the cards having nearly identical demand profiles.

I guess what I am saying is don’t get discouraged by missing the boat on cards like Overabundance when less obvious cards that are basically an identical spec are still left on the table. This is why I wait for EDHREC data rather than trying to guess what people are going to play the second a card is spoiled. Why fight everyone for cards that are going to peak then drop when you can fight no one for a slow gainer and sell at its peak?

Yurlok is here to finish what Kydele started and I’m about it. Sword and Umbral Mantle as both in play here because they generate infinite mana in other people’s mana pools if you have something like Heartstone and that’s hilarious. Even if you pay 1 mana to deal 3 damage over and over, it’s still a really solid pairing. Any 2-card combo where one of the cards is your commander is strong.

Mantle is already halfway through shaking off that Mystery Booster printing – what a beast of a card. This is solid with Yurlok and will be in like 80% of the Yurlok decks built, which could be a lot.

Good thing Yurlok deals the damage and it doesn’t count as mana burn. Just when you thought you were safe to let your opponent resolve Eladamri’s Vineyard with feet.

Maybe a bit too late for this one, but it’s good to know it’s a thing. Luckily CK’s buylist is climbing along with retail in case you want to get out quickly and easily and leave CK to try and offload the copies you got back in 1997.

In case you were thinking, “This is playable now AND on the Reserved List? How much could it possibly fall if the deck doesn’t catch on? It’s not like they’re printing more copies of this” I present to you the following

That plummet accounts for about $4.35 of its peak of $5, or about 87% of the card’s “Well it’s on the Reserve [sic] List” perceived value. Just saying. Not saying it hits $0.65 again, I’m saying I’m staying away. If I thought it was a good idea to invest in RL garbage that might go up because of a deck, I’d advocate better cards than this. Could this be the deck that does it? Maybe, but if so, it’s already back up to $5 so no sense lamenting that you don’t get the chance to go hunt for greater fools, there’s money to be made elsewhere.

That does it for me this week. There are probably more cards you can pick up and I would keep going if they let me, but it’s time to call it an article. Thanks for reading me for all these years. Join me next week where we’ll find even more stuff the Overabundance-buyers missed. Until next time!