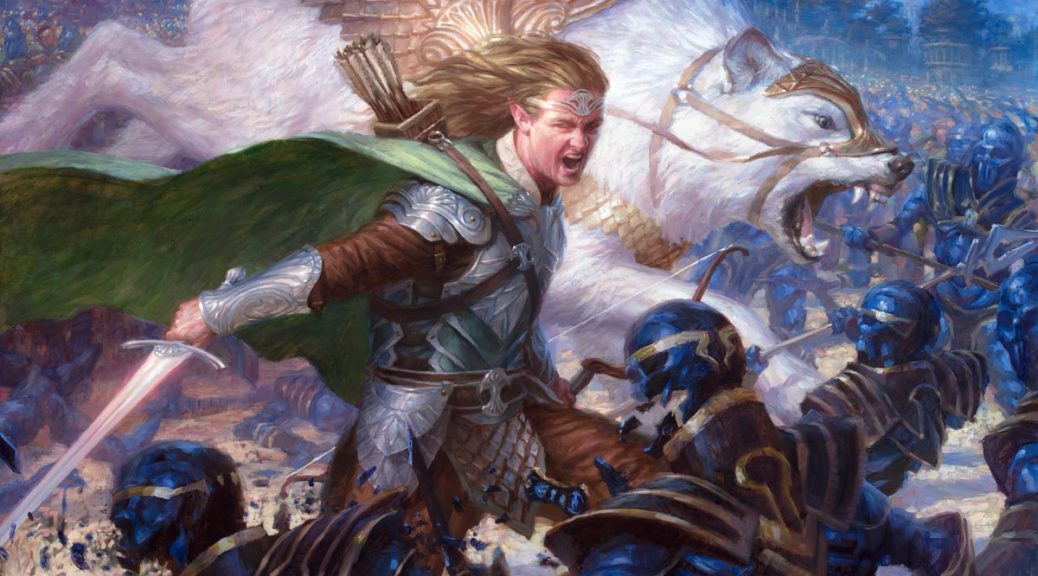 Another week, another Watchtower, another loosely themed article. I don’t know if doing them like this is better or worse for you as a reader, but it definitely helps me to write them and nobody has told me they don’t like it yet, so I’m gonna keep going! (Please do shout at me on Twitter if you feel strongly either way). You can probably take a good guess at the kind of cards that I’m going to be talking about today, but I do like to bury the lede just a little bit to try and keep you interested, which means I can’t be too specific with my article titles. Anyway I’ll stop rambling – let’s jump in.

I was flicking through some of the Standard decks that are being played at the moment, and something caught my eye. Almost all of the Temur ramp/adventure decks that are being played at the moment are playing Obosh, the Preypiercer in the sideboard as their Companion – it’s effectively a free-roll as you really don’t have to exclude many cards to get it to fit in, and you’re still able to cheat a little bit with it by playing cards like Bonecrusher Giant and Brazen Borrower that have odd converted mana costs but even costed spells attached to them.

This led me to looking at where else Obosh is being played right now, and it turns out that the current version of the Prowess / Burn decks in Modern are doing exactly the same thing (and even including the Bonecrusher Giants to boot). Being able to play a Companion without needing to significantly warp your deck around it is a great boon to any strategy, and we’ve seen Lurrus and Yorion decks still performing very well even after the change to the Companion rule. I think that Obosh is going to fall into a similar pattern, perhaps not being quite as prevalent as the other two but a decent role-player nonetheless.

I and others have talked about Lurrus in articles and on the podcast before now, as we’ve seen supply dwindle and the price going up and up. Yorion has done the same, and I’m absolutely sure that Obosh is going to do the same thing. You can currently get some outrageously cheap copies around $7 on TCGPlayer at the moment – bearing in mind that Lurrus, which sees around three times the amount of play in Modern, is over seven times that price. There aren’t too many under the $10 mark though, and it ramps up pretty quickly with only 29 FEA listings on TCGPlayer. I think that this will very easily be a $20 card in a few months, and probably head towards $40 before too long (given that I doubt we’ll see it reprinted any time soon).

Come on now, you didn’t think we could get another Akroma printed without a good bit of keyword soup, right? Give it a few years and the next version will probably have so many keywords that the text is so small you need a jeweller’s loupe to read it. But until then, let’s take a look at what we’ve got to work with for now. Aside from just being a decent body with a bunch of relevant abilities, the fact that this new Akroma has Partner strapped to it as well makes it a whole lot better, and we’ve already seen it being paired with other keyword-endowed cards like Rograkh, Son of Rohgahh, which is quite neat and fairly amusing really.

So it’s a popular card from Commander Legends – great. But what I want to focus on here, as is hopefully evident by the fact that I’ve given you the current price in Euros, is that these are way cheaper in Europe than in the US at the moment. It’s the age-old adage (I think that’s a tautology, but oh well) of EDH cards being cheaper in Europe, and yes I’m going to keep hitting you over the head with it.

Now let’s be clear here: the etched foils from Commander Legends can be found in regular draft boosters, unlike the EA cards that only come in Collector Boosters. That means that there’s a decent chunk more supply of etched foils in general, but Akroma here is a mythic and there really aren’t too many copies going around (in the US at any rate). Prices start at $17 on TCGPlayer, almost double what they can be had for on MKM, and even after you’ve taken into account the arbitrage gains I think this card is heading upwards if you hold onto it for a while. EDHREC is showing us that it’s one of the most popular new Partners, and that’s mirrored on TCGPlayer with it having much lower stock levels than the other etched foil Mythics. I think we’re onto a winner here.

I’m rounding things off with another arbitrage pick, and want to give a shoutout to one of the Protraders in the MTGPrice Discord for putting this on my radar last week – it’s a good find. I’m stretching the ‘friends’ theme a little bit here, but don’t worry, it’s worth it! I reckon that Giver of Runes could definitely be your friend, given the ability and flavour text on her – after all, friends are the family that we choose.

Either way, this is a card that’s been consistently performing well in various Modern decks since the release of Modern Horizons, as well as showing up in around 5000 EDH decks listed on EDHREC. Highlights include Heliod Company decks, Devoted Devastation builds and the more classic Death & Taxes lists; it’s really great at protecting combo pieces as well as shoring yourself up against removal-heavy strategies.

There are a grand total of nine NM foil listings for Giver on TCGPlayer at the moment, which start at $45 and don’t exactly go down from there. That makes the $22 copies on MKM an absolute slam dunk, great for immediate arbitrage and even better to hold onto for a little while. I can’t really think of anywhere that this could be reprinted soon other than Modern Horizons 2, which isn’t hitting until Q3 next year anyway (and even then I’m kinda doubtful that we’ll see it again there). On that kind of timeline this could be a $75+ foil by that point, especially if paper play has started to pick up again, even just at an LGS level.