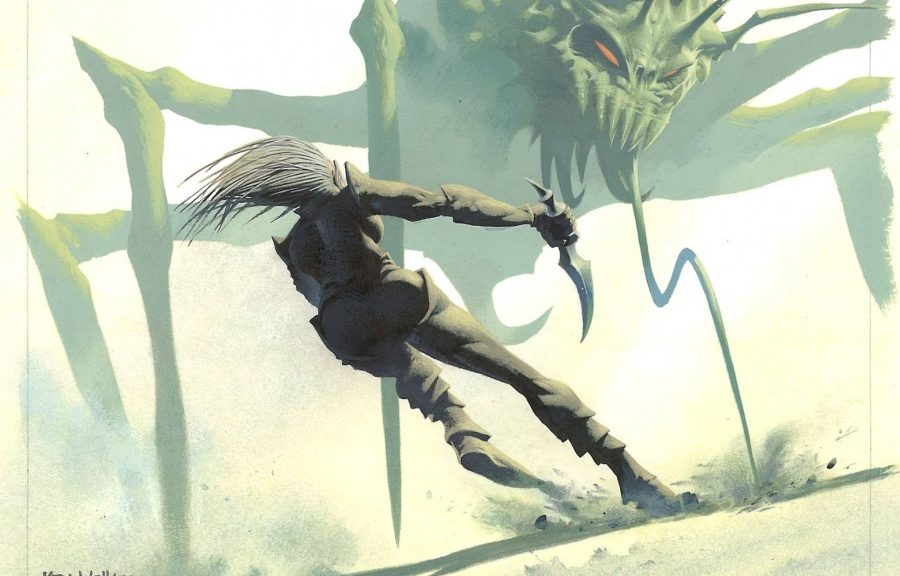 As Obeka begins to wane (though not out of the top spot), naturally something else must wax for the balance to be maintained (I don’t know what the balance is, forget I even said that, stupid STUPID, focus Jason) and today what the waxer is became clear. It’s someone who clearly knows a lot about waxing.

Look at this smooth-chested, Glenn Danzig-looking rejected Manowar album cover. If you’re not impressed by the time he spends every morning, shaving the part of his body not covered by his leather karate gi, you’ll be impressed by how he’s climbing the leader board.

Shoving decks aside like he’s actually Glenn Danzig and the other decks are a fan who wants an autograph, Jared is making a big splash in the format, and a few (viking, on fire) ships have sailed already on the basis of this cartoonish 80s throwback of a Magic card. I’m sorry, I know you want me to get to the specs part of the article, but read his flavor text. “I’m here for what’s mine” like he’s Glenn Danzig in the promoter’s office asking for his check before the last note from “Long Way Back From Hell” has finished reverberating in the speakers onstage. Man, I do NOT like Danzig, apparently.

Unlike Danzig who coasted on the success of the Misfits (last one, promise), Jared Carthalion is out here doing real work.

Jared doubled the price on this card just like Glenn Danzig doubles as a poor man’s Henry Rollins. Don’t expect to get these for under a 10-spot on CFB, either, folks.

So with the “Carthalion effect” (that would be a sweet name for a band) moving prices, why are we even bothering to dig through at this point? Hasn’t every ship sailed? Hasn’t ever boat been launched? Hasn’t every mother told her children not to hear Danzig’s words by now?

I don’t think so, I think there’s still plenty of meat on the bone. I think Jared is the Nikya to Obeka’s Vannifar and since it’s a non-obvious commander, I think there are some non-obvious specs. Pariah’s Shield was some low-hanging fruit but I think there is more fruit, higher up, but I’m mixing my metaphors now. Let’s do the spec part of the article now.

The Fruit Still On The Bone

I like this for a lot of reasons. I spiked hard because of a deck in Modern with Hardened Scales and while that wasn’t sustainable, we have a second spike incoming. When a second spike happens, there is no more opportunity for people to pull loose copies out of the binders at the LGS because those all evaporated the first time the card spiked. Copies are concentrated in the hands of dealers, meaning players have to pay whatever those dealers want for the copies. When that supply sells out, there is no way to get more supply in the hands of dealers without them raising the buylist price, so they do that. That’s how we get back out of them, usually. It’s a fun cycle of people paying each other to hold onto copies of cards.

Are we close to the card selling out?

With Card Kingdom out of NM copies and about to sell out of damaged and Coolstuff (where we have about 8 people who write about EDH every week) and CFB being sold out means that the card is about to pop. It’s not just Jared, by the way.

Neyith was printed this year and Marath was just reprinted in etched foil in Commander Legends. That’s quite a bit of interest just this year and the finite copies that were in the hands of dealers who probably paid like $2 to get these when they were selling for $5 are running out. With lots of people vying for the copies at once, I wouldn’t be surprised to see Jared finish what Neyith started. If people could actually get Jumpstart to build decks with it, Neyith might have been even more popular. Oh well, still plenty of fruit on the bone. Let’s move on.

This keeps flirting with $14 on Card Kingdom and when it goes back down, it never stays there for long. This is tough to reprint and does a lot of work. It also just wins the game, which is cool. I am looking forward to CFB figuring out whatever is wrong with their Crystal Commerce page – this is not $6 on CFB.

The non-foil caught up to the foil. I don’t think that makes the foil more attractive, but I do think it shows that this is a card that casual players like and which may have underpriced foils in the future. I don’t like EDH foils, you all know that, but once they become the same price, the foil looks better and those have a higher ceiling.

I don’t think Jared has enough juice to move the needle on a card like Pariah with 4 printings (it was also in a Saga precon that I bought a bunch of because there wasn’t a better way to get copies of Worship when you don’t have a credit card). That said, there is a tiiiny bit of movement in the price that is outside the typical noise, so it’s trending up, for what it’s worth. 4 printings means less when those sets are Saga, 7th, 10th and Conspiracy. It was basically printed in Conspiracy. I don’t love this, but they exist. It’s also a 7th Edition foil, which probably will see a bump just because it’s due one.

I like Bear Umbra a lot. We saw a nice dip and we’re starting to see the very beginning of that reverse-J shape that is the start of a nice U shape. I think this goes above $10 pretty easily and I could see CK going from selling for $7 to buying at $7 within a year.

Whenever a card costs more on TCG Player than it does on Card Kingdom, I investigate.

Well, THAT is good to know. I wouldn’t have thought to check every card to see if they’re all in-stock, but I was alerted by the TCG Player price being higher. That’s a big red flag to me. Sometimes it’s legit, but with Card Kingdom being an established Seattle store that charges more but has a super generous buylist and which, to my mind, is the flagship EDH price site, CK can usually get away with charging more than a marketplace like TCG Player. When CK is cheaper, I take 2 seconds and check. Card Kingdom sells a lot of EDH cards, if they’re sold out of all conditions, TCG Player could be the next domino to fall. We’re about to see some movement. It won’t go to $10, but it could go to $5.

That does it for me this week. Next week we may be out of commanders to talk about and with there being a lull between now and Kaldheim, I might write a treatise on why I trust Card Kingdom so much. Until then, stay safe and don’t build anything I wouldn’t build. Until next time!

One thought on “Unlocked Pro Trader: I Went to Jared”