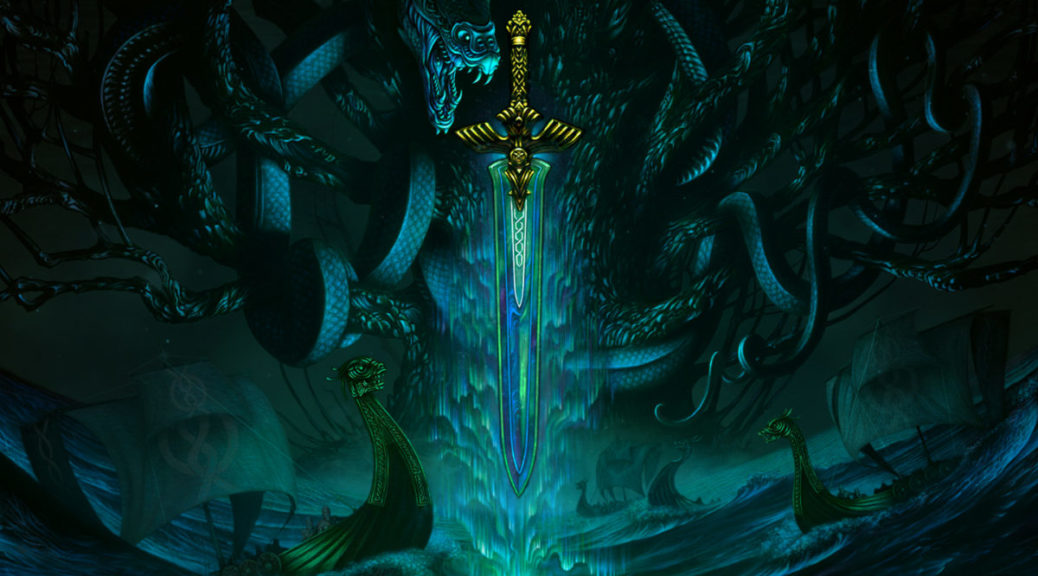 Kaldheim release is just around the corner, with the Arena release happening this Thursday (28th) and paper release next Friday. As with most Standard set releases, I like to do an article beforehand having a look at which cards I think are worth keeping an eye on, to pick up when they hit their lows. When paper Magic is back in business I might get a chance to talk about some potential preorders, but until then I don’t think that any preorders will really be worth it.

Kicking things off with a fun one, this card should be a shoe-in for pretty much all five colour decks. Aside from the activated ability on it, enabling all your lands to tap for mana of any colour is big game when you’re trying to cast ridiculously costed spells, and being able to fetch Gods up from your deck is just gravy on top (but will be very popular with the casual crowd).

The early EDHREC stats back this up, with it being the most popular card from the set in terms of percentage inclusion, being in 40% of all decks it could fit into that have been registered since the card was added to EDHREC. I don’t think that this is just an EDH card though – I think that this could have some competitive applications as well. Standard, Pioneer and Modern have recently been more and more inclined towards having four or five colour decks at tier one or two, utilising powerful cards like Niv–Mizzet Reborn and Omnath, Locus of Creation – and The World Tree will slot right into those.

There’s also a neat little combo within another card from Kaldheim, Maskwood Nexus, that lets you put all the creatures from your deck into play. I don’t know if that’s going to actually be good anywhere, but I’m sure that people will try and set it up in EDH. Preorders on TCGPlayer are a little silly at $16 right now, but over on MKM you can preorder them for as little as €4. I think this is indicative of lower prices to come, and at peak supply I see these going as low as $3. It’s worth keeping an eye on, and a year or two out I think that this will be a $10+ card.

Realmwalker is another of the early EDH front-runners from Kaldheim, and I can see why. This card slots right into any tribal deck that can run it, and can serve both as a powerful value engine as well as a potential combo piece. Being able to cast creatures off the top of your library could enable some serious shenanigans, and is an effect that Dragons and Elves decks alike can profit from.

It’s not just EDH that might want this card though; it could be good enough for Elves decks in competitive formats to pick up. I’m certainly not an Elves expert, but Realmwalker does have an Experimental Frenzy feel to it, which has proved its mettle in Standard and Historic, and so I think there could be potential for this to see some constructed play.

It’s worth noting that this is the buy-a-box promo for the set, which does add a fair amount of supply into the market but on a longer timeline I think that this is still a great hit. I expect it to have a similar trajectory to that of something like Ramunap Excavator, with a long steady growth and a nice buylist price down the road, and the potential to spike along the way.

Vorinclex is the Nyxbloom Ancient of this set*.

*There are a couple of caveats. I don’t think that Vorinclex will be quite as prevalent as Nyxbloom has been, because it does have slightly narrower applications than the mana tripler, but the flipside to that is that I think this card could see competitive play, and so that might make up for the lost EDH decks.

In general, however, almost every set has a mythic or two like this that will get relatively low at peak supply and then just grow and grow as EDH demand outpaces supply. See: Finale of Devastation, The Great Henge, Nyxbloom Ancient, Fiery Emancipation, etc. These are all mono-colour cards with wide applications that can fit into a lot of decks, and you’ll do well to be able to identify them ahead of time for each set so that you can pick them up at their lows.

Regular versions of Vorinclex are going to do great, but there’s also the Showcase and Phyrexian versions to consider here too. Being a Showcase means that it’ll hit lower prices than an Extended Art version might (as they’re only in Collector Boosters), but I honestly don’t know where the Phyrexian versions are going to land. Preorders are going for €36/€120 on MKM for non-foils and foils respectively, so I think that you might be able to get non-foils around $25-30 and foils for uhhhh $?? I’m not sure yet. One to keep an eye on for sure, because I doubt we’ll see it reprinted in Phyrexian for a long time and foils are going to be pretty scarce.