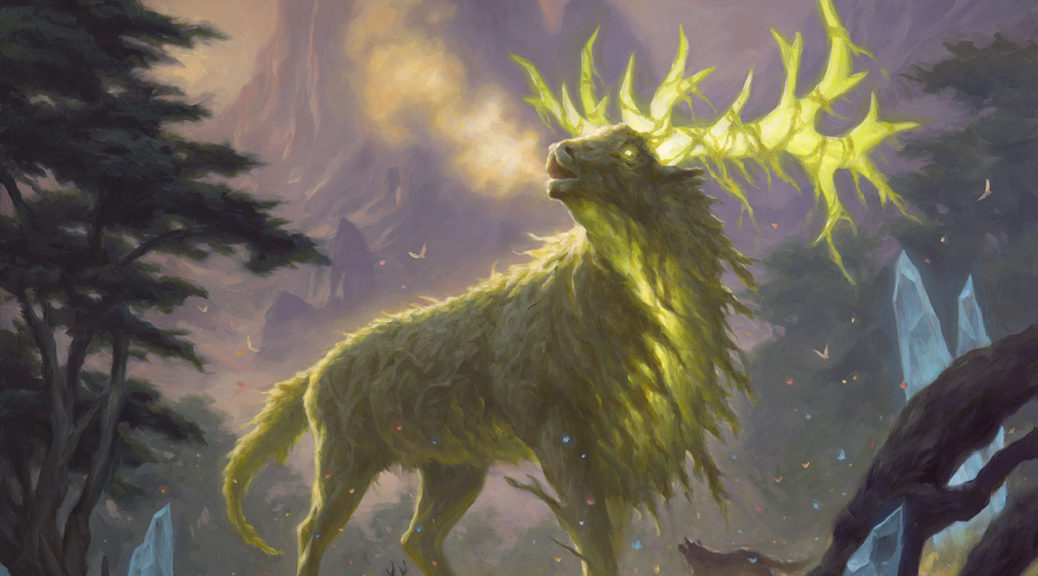 Along with the not-so-beloved Throne of Eldraine, Ikoria: Lair of Behemoths has just left Standard rotation, and in the 18 months since its release we’ve seen some big ups and downs from a few cards in the set. A lot of the best cards have already been identified, and the time to buy Triomes as specs is long gone – but I think that there are still a few good cards that deserve our attention as Eternal and EDH options.

Remember when Shark Typhoon was a $2 rare, back before people realised that it was actually really good and not just a meme? I remember, and I wish I’d bought a bunch when it was that cheap – but I didn’t, because I too didn’t really think much of it at the time and got caught by surprise when it was suddenly $10 and then even $15 for a brief period. Now that it’s rotated out of Standard, this is an Eternal and EDH-only card, and there’s good reason it hasn’t crashed to bulk prices.

Ever since people realised this card was pretty good, it’s been a staple of control decks in Modern and even Legacy, as well as being included in almost 10,000 decks listed on EDHREC. I think that it’s here to stay as a minor staple in multiple formats, and I doubt that we’ll be seeing a reprint too soon – it’s unlikely we’ll see Cycling again in a Standard set in the near future, and although it’s possible we see it reprinted in a Commander deck, we had a Cycling deck in the 2020 lists so again it might not show up for a while.

I like the look of the regular non-foils here, because although there are around 125 non-foil listings for the card on TCGPlayer, most of those are single copies and will dry up steadily over the next few months or so. If you are worried about a reprint then I think that the EA versions are a great buy too. Currently sitting at around $14 I think that those could easily see a double up to around $30, and if you’re feeling a little splashier then I feel fairly confident calling the FEAs to go from $45 to $60+ as well (although there’s less meat on those bones than I’d really like, so the others are better specs for now).

Onto more of a bulk pickup now, and I’m really quite happy to have found this one. Reconnaissance Mission is just a strictly better Coastal Piracy, and for one of the top EDH uncommons from Ikoria I think it’s definitely underpriced at the moment. If we compare it to Bastion of Remembrance, another top uncommon from the set that does a similar thing to a fair few other cards, you’d think that Mission would be pretty close to Bastion in price – but it’s not at all. Bastion is in just over 20,000 decks listed on EDHREC and Mission hits 80% of that at nearly 16k, and yet Bastion is already a $3 card.

This is sure to be due for a correction sooner or later, and so I think that now is a great time to be picking some Reconnaissance Missions up. You can currently grab a bunch from TCGPlayer at around $0.40 each, and the fact that CardKingdom is already paying $0.33 credit for them makes me fairly confident about this pick. There are a bunch available even cheaper in Europe too, so if you’ve got access then those are nice pickups as well. I’d be looking to buylist these out in 12 months or so – this isn’t a huge play but it’s something easy to bulk up a buylist nicely.

As the most popular of the Mythos(es?) from Ikoria, Mythos of Snapdax FEAs are starting to run a little thin on the ground. I think that if this were just a white card and not three colours then it would be in a lot more decks than it currently is, but as it stands I think the card is doing just fine. It’s effectively just a Tragic Arrogance at one mana cheaper, and as such has turned out to be a popular choice amongst Mardu enthusiasts.

TCGPlayer is down to around 30 listings for NM FEAs, and I think that this will be a nice steady climber over the $10 mark given 12-18months. It’s a card I want to pick up a playset or two of and forget about for a while – no immediate rush to grab them but I think that they will prove to be good gainers over the next year or so.