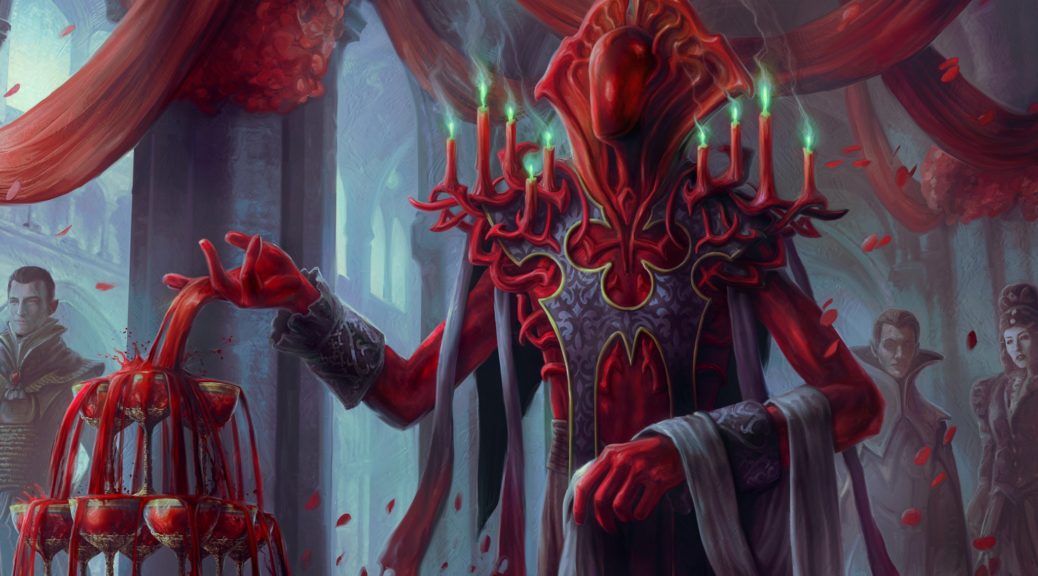 Crimson Vow only had its paper release over the weekend, but seeing as the set has been out on Arena and MTGO for nearly two weeks already, people have been thinking about the new cards for a while now and we’ve got some good early data to go off. Today I’m looking at some early picks that might not be ripe to pick up yet, but are worth keeping an eye on.

Early EDHREC data has Welcoming Vampire ahead of most of the pack right now, and it’s not difficult to see why. As a mono-white card, this doesn’t only go into Vampire decks but is also a great inclusion in any white deck looking to churn out tokens or other small creatures. Only getting one trigger per turn isn’t the best, but the fact that you’re getting card draw for free makes it situationally better than cards like Mentor of the Meek or Bygone Bishop that you have to pay mana for in order to get your card draw.

In a Vampire deck like Edgar Markov this card shines even more, with Edgar’s Eminence ability giving you an extra card every turn that you cast another Vampire spell, regardless of that Vampire’s power. Especially in white where card advantage can be lacking, creatures like this giving that extra boost can be very important for those EDH decks.

TCGPlayer prices are around $4 for the Showcase foils at the moment (which I think are a better pickup than the regular versions), and I think in a few weeks we should see those trickle down a bit to $2-3. Although it might not see much competitive play, I think that Welcoming Vampire will be ubiquitous enough in EDH that we should see an $8-10 price point 12-24 months down the line.

Six mana might seem like too much to pay for a 3/4, but when that body is flying, hasty and reanimates another attacker along with it then things change a bit. If you’re running Olivia as your commander then you’ll want her out as much as possible, so strategies to protect her/recast her quickly are probably going to be good; you might also just be stacking your deck with other Legendary Vampires to try and keep your creatures that you reanimated around.

Olivia is proving to be popular both as a commander and part of the 99 – it’s good in Vampire decks and other RB aggressive/reanimator decks, and will likely end up being one of the top commanders from Crimson Vow.

Although the Dracula version of this card (Sisters of the Undead) is really cool, supply on it is much higher than the Showcase versions, and so for people that want the Showcase version prices are going to be higher (and already are). I think we’ll see the Showcase cards drop to around $10-15 in the next few weeks and then pick back up again before too long. As a premium treatment mythic there’s never going to be a huge supply of these so keep an eye on when it hits a low!

I’m sure that any of you who have played a reasonable amount of Crimson Vow limited will have experienced Hullbreaker Horror from one side of the table or another, and it’s been tearing up the new Standard format as well. It’s also the most popular EDH card from the set according to EDHREC, beating out all of the lands from the rare cycle in raw numbers. It’s just a super powerful creature that can go into a lot of blue decks – it can’t be countered and helps to protect the rest of your board/spells so long as you can cast more spells.

I don’t expect this to become as much of a staple as something like Thassa’s Oracle (despite its potential for infinite combos), but it’s definitely going to be very popular nonetheless. FEAs will be a great pickup at their low, and I hope we’ll see them around $7-8 so I’d pick some up if they do hit that mark. I expect you can get $20 for these in 12 months or less, and from there they’ll keep heading upwards until it sees a reprint (which won’t be for a while).